It’s no secret that we’ve been rather keen on many of HTC’s recent touchscreen smartphones, namely the HTC Desire and HTC Legend. However, there’s no getting round the fact that they’re still quite expensive handsets. So to address a more budget-conscious market HTC has released the Smart, a small touchscreen phone based on Qualcomm’s Brew operating system.

The Smart is a small phone. With dimensions of 104 x 55 x 12.8mm it’s a good 10mm shorter than most of its larger brethren and a good few millimetres narrower as well, though about the same thickness. All told, this makes it a very easy device to handle. 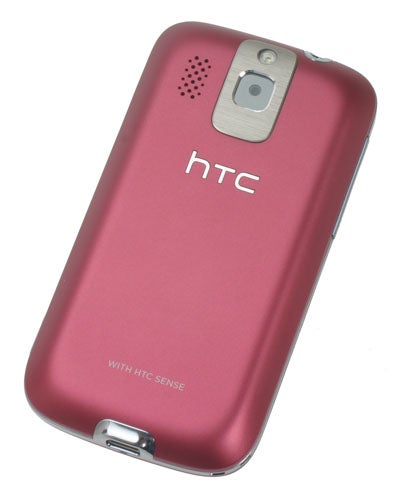 Build quality also seems good, with tight seams between sections, no discernible flex or creak from the body panels and firmly mounted buttons that have a nice defined action. The screen surround is even made from aluminium and has the same shiny bevelled inner edge as the Legend. Sadly the screen is soft plastic, giving away the fact that it uses resistive touch-sensing, so doesn’t look or feel as classy as glass-fronted phones and is going to scratch more easily.

As to the interesting choice of bright pink, it certainly gives the Smart a unique appearance that we rather like but if it’s a bit too brash for your liking, white and black versions are also available. We’re also not so sure about the front button layout, which despite being practical is irritatingly asymmetric; and the speaker grille, which catches many a spec of dust and grime in its tiny holes. More universally appealing are the generally uncluttered layout of features and logos and the avoidance of ever scratch prone glossy plastic.

Contrary to what you might expect considering its price, the Smart has a decent complement of physical features with a proper headphone jack on the top edge, a 3.15-megapixel camera with an LED flash (though sadly no autofocus) on the back and a microSD slot underneath the battery cover. A year or so ago we’d also have applauded the use of a mini-USB connector on the bottom edge for charging and data syncing, however micro-USB is supposed to be the standard going forward and is well established so this seems like an odd decision.

What really defines this device is its operating system, Brew. Although it’s been around in various guises for years, this is HTC’s first play with it. The result is a unique operating system instilled with the essence of what HTC has been trying to achieve with its Sense interface tweaks to both Windows Phone and Android. It’s basic but incredibly easy to use.

Turn the phone on and it all looks rather familiar with HTC’s famous clock/date/weather app sitting on the central homescreen. Flick left and right and you can access six more screens, which are loaded up with various apps, including a screen of nine shortcuts to your favourite contacts, a combined Facebook and Twitter feed app, a music player, a picture viewer, and a messages previewer. What appears where can be customised with a total choice of 10 apps on offer. You can’t, however, arrange the apps within a page and add other shortcuts like you can on Android. Each page can be thought of almost as an individual app.


Instead, you can add shortcuts to your three favourite apps to the bottom of the main homescreen. Flick this screen up and you can access six more shortcut slots. To gain access to the full complement of the phones features, you press the back button when on the home page. This brings up three pages of apps arranged in grids of nine.

That back button also doubles as the home button so tapping it once takes you back a step while holding it down takes you home and tapping it again brings up the aforementioned apps. The little button above left of the back button is a context-sensitive menu button. Press it when on the central homescreen and it lets you customise the homescreen layout, change the theme or wallpaper, or go to the main settings page. Press it when in the web browser and you get Back and Forward buttons, Bookmarks, etc. Press it when in the messages app and you can start a new message, delete a message, etc. You get the picture. 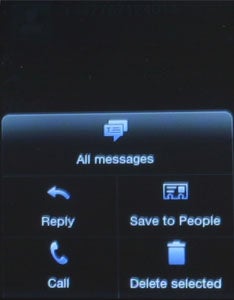 The general feel of the Brew operating system is something akin to a mix of the Palm Pre’s WebOS and Android. So you get the slightly abstract app management and streamlined interface of the former but with a little bit of the latter’s practicality due to its extra buttons. The result is very good indeed. 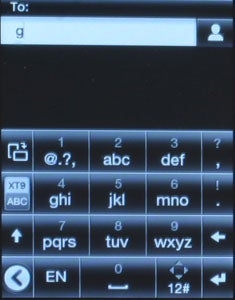 What really helps this OS make such a good impression is how it responds to your movements. Just like the iPhone and Palm Pre, the virtual objects you move onscreen react in a way that feels really natural. Swipe a list up or down and it freewheels with just the right pace. Go beyond the end of a list and, if you continue scrolling, it pulls the list with your finger but shows there’s nothing there, giving you a neat visual cue. What’s more, all the animations and effects actually add something to the user experience rather than just being there for show. It’s not quite as slick as the iPhone as it’s a bit sluggish, but it’s better than Android and in fact really highlights our continuing complaints with that OS. The only real downer, due to the resistive touch-sensing, is typing on the on-screen keyboard – it’s rather slow, though the predictive text is very good.

All the phone basics are handled by simple yet effective apps that make it quick and easy to just make a call or send a message. Take the picture viewer, for instance. There’s no fancy 3D gimmickry; just a list of folders, each one containing a grid of thumbnails. Likewise, the mp3 player simply shows you a white on black list of artists then albums and tracks. It handles mp3 tags properly, shows the album artwork, and just works. 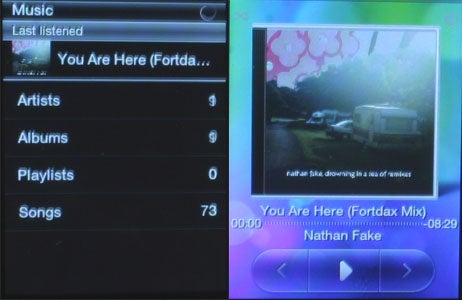 The web browser also puts in a decent turn. It copes with full web pages and has a nice cut down interface. Particularly clever is the zoom control that appears as a horizontal bar across the lower portion of the screen whenever you touch the display: just drag the green spot left and right to zoom in and out. 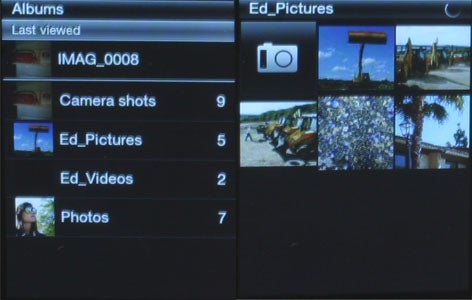 As for social networking, you can log into Facebook and Twitter accounts through the phone and view updates using a single app called Friend Stream, but there are no dedicated apps for the services themselves. Instead, you’re simply taken to mobile optimised versions of the sites. 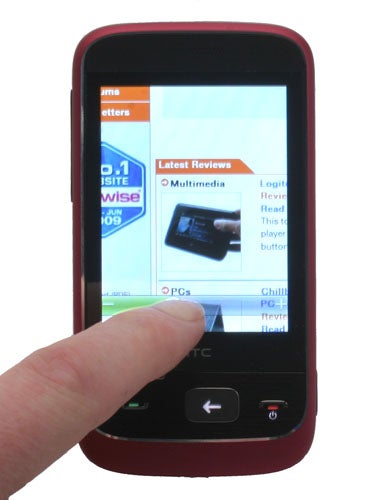 Other apps include a calculator, FM radio, File browser, a rather neat flashlight, and a couple of games. If you want more, however, the Smart will let you down. There isn’t a map application and there’s no app store to download more. You also can’t multi-task and there’s no Wi-Fi for speedy local web browsing. You do get 3G for slightly faster mobile browsing but you can’t seem to switch it off to maximise battery life. Then again, considering we quite easily got about three days of use out of the Smart, battery life isn’t a major concern. 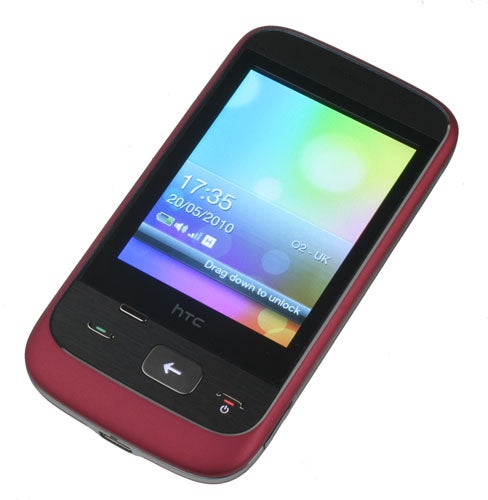 Another negative is the screen, which at 2.8in and with a resolution of 240 x 320 pixels isn’t particularly sharp. The operating system does its best to keep everything looking smooth and readable but there’s definitely a slight and constant graininess. Overall brightness isn’t great either so it can be difficult to see in bright sunlight. Viewing angles and colour reproduction are more than adequate, though. 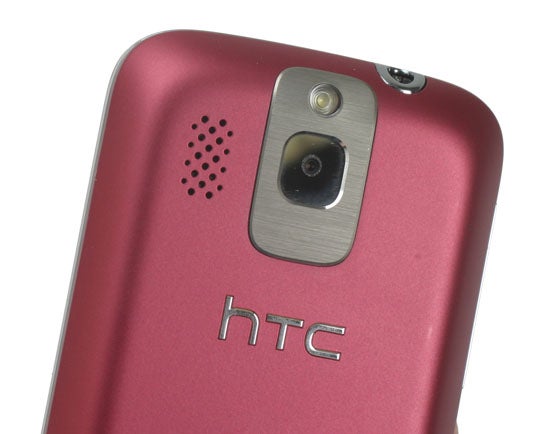 The Smart’s fixed-focused camera limits its use but overall performance is decent so you can rattle off a few shots in quick succession. It’s comfortable and easy to use, too, thanks to a dedicated camera button on the right edge. Photos are as mediocre as you might expect with fairly poor sharpness, slightly iffy colour accuracy and a general graininess. However, outdoor shots are still perfectly usable and the flash helps prevent indoor shots from turning into abstract motion-blur art. Video is also available and you can, again, use the LED light while shooting. However, with a resolution of just 240 x 320 pixels and framerate of just 15fps, the results are of very limited use.


The HTC Smart is available for free on contracts as low as £15 per month and will set you back £180 SIM-free. At this level, its high build quality and good external features make it a strong competitor in the value sector. However, some ‘true’ (if slightly old) smartphones, such as the HTC Hero, can be had for around the same price, so we might be inclined to go for one of those deals.


The HTC Smart is a fascinating new entry from the smartphone stalwarts. Its brand new finger-friendly operating system brings a level of usability unseen in this segment before and its build quality is also a step up. However, HTC’s claims of it being a smartphone are far wide of the mark. It’s good for a budget phone but that’s about it. Considering you can pick up slightly older smartphones for bargain basement money these days, we might be inclined to do that instead. 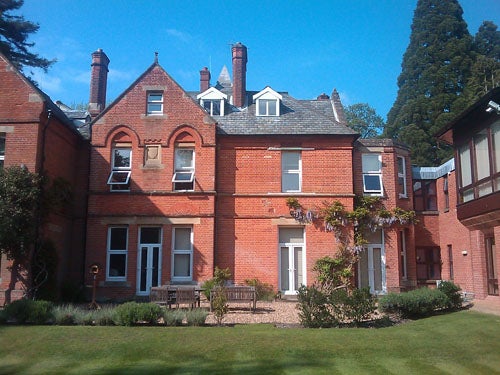 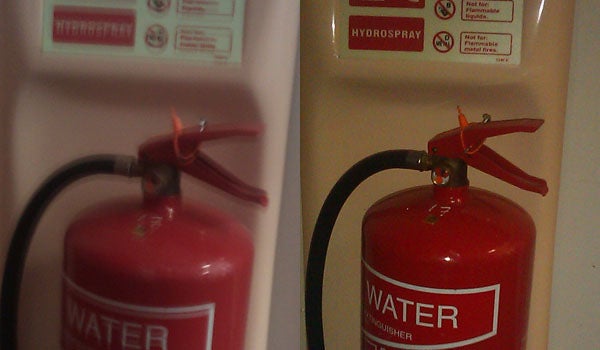