Exasperated, flummoxed, baffled, bored, annoyed, bemused, confused … there are plenty of words in the English language (not all of them publishable) to describe how I feel about the hype that has surrounded the iPhone since it was first announced.


You’d think that the world had been taken over by some strange new religion, given the number of people who seem to be in the thrall of the Great Jobs and His Mighty Phone. But for those who don’t worship five times daily at the altar of Apple, life has continued over the past few months and that goes for other mobile phone manufacturers as well. 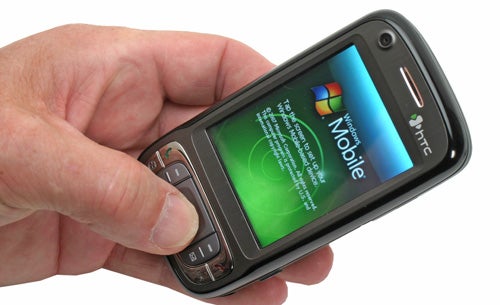 Apple atheist HTC has been particularly busy. We’ve already seen its take on the touch-sensitive iPhone in the shape of the somewhat disappointing Touch, we’ve since reviewed its business-focussed PDA phone, the P6300, and we have the much-awaited (but not quite as much as the iPhone) P4550 Kaiser in our hands.


This is the successor to the much-praised TyTN, a smartphone you might otherwise know as the T-Mobile Vario II, the Vodafone v1605 or the Orange SPV M3100. It was a favourite in the Trusted offices when it was launched, but has eventually been superseded – at least in the affections of our esteemed editor – by the Orange SPV E650 (based on the HTC S710), which managed to combine more phone-like dimensions and appearance with a pop-out keyboard.


In appearance the P4550 is very similar to its predecessor. It still has that sliding qwerty keyboard, still has a 2.8in 240 x 320 resolution screen and features HSDPA and 3G compatibility for lightning quick Internet speeds and video calls, on top of GPRS for times when a faster connection isn’t available. It’s still a quad-band phone, which means you’ll be able to use virtually anywhere in the world if you can get a signal – assuming the locale has a reciprocal agreement with your mobile phone network. But look a little closer and you’ll find that a number of significant changes and refinements have been made. 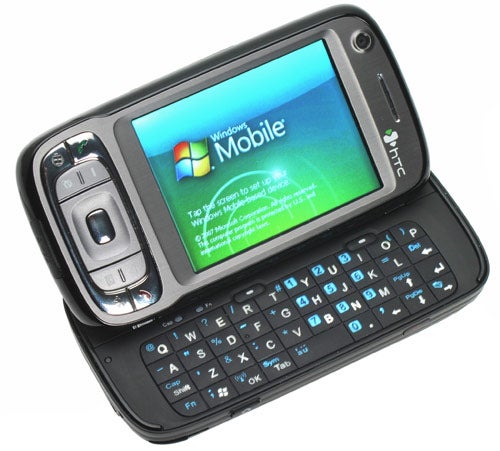 First, it’s gone on a bit of a diet, as a quick comparison of the dimensions reveals. At 110 x 58 x 18mm it’s now 4mm thinner and 2.5mm shorter than its predecessor and is also 16g lighter at 160g. It’s still nowhere near as slim as a Blackberry 8800 and it’s more bulky than Riyad’s Orange SPV E650, but it is small and light enough to sit in your pocket nicely and is much less of a trouser-pocket bulger than the Toshiba G900 I recently reviewed.

Second, the camera has been upgraded to three megapixels in this release (though there’s no flash or mirror). You can get pretty good results with this outdoors and in good light, but it doesn’t compare to the camera you get on a Sony CyberShot phone like the K800i, and the lack of flash means its usefulness indoors is limited.


Third, and perhaps most importantly, HTC has also managed to squeeze in a GPS receiver, another significant addition and improvement over the original TyTN. This means you can choose from a multitude of navigation software packages – including the Wayfinder and Telmap systems I recently reviewed, or the more conventional CoPilot or TomTom Navigor software – and use the P4550 as your dedicated in-car sat-nav as well as your mobile office machine. 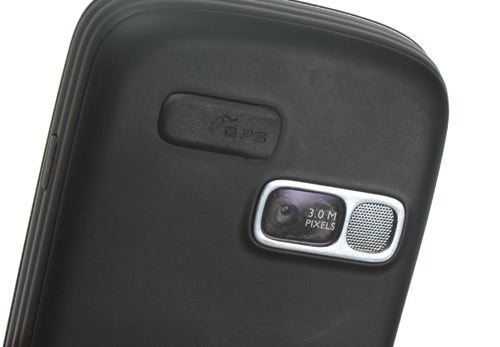 A more subtle difference – spotted by our ever-observant news editor Gordon – is that the P4550 opens from the ‘other side’ compared to the original TyTN. This means opening it with your right hand is easier, but if you like to hold your smartphone in your left, while jabbing it with your right, it makes it marginally less convenient to pop open.


Personally, I couldn’t care less either way, and I think that most people won’t give a fig either, especially when they realise that the screen, once extended to reveal the keyboard underneath, can also tilt upwards. When I discovered it could pull off this neat trick, a chuckling ‘cool’ escaped under my breath. 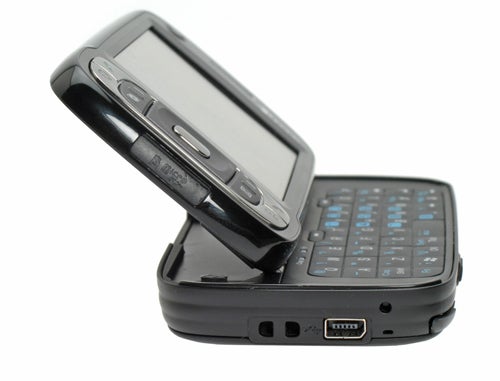 But seriously, the tilting screen is more than just a gimmick for geeks to drool over. It makes browsing websites and typing emails more comfortable because you don’t have to tilt the phone at an unnatural angle to see the screen. And because the screen can be tilted to any angle between zero and 45 degrees it’s far less prone to reflections than one that’s horizontally fixed in place. It also means you can lay the P4550 on a table and jab away at the keyboard with your fingers rather than thumbs without having to crouch over the screen like a Tour de France racer hunched over the bars on a time trial bike. And, if you happen to have a Bluetooth keyboard you use for longer documents and emails, it means you don’t have to prop the phone up in a cradle either.

Not that the built-in keyboard is bad. As with the keyboard on the SPV E650, the keyboard on the P4550 is both well laid-out and pretty easy to type on for its size, though I have to say that I preferred the slightly more domed keys on the Toshiba G900. That said, I do like the fact that you can get to numbers and important symbols quickly with a flick of the Fn key, and the fact that the full stop has a key of its own is a welcome relief when entering website addresses. 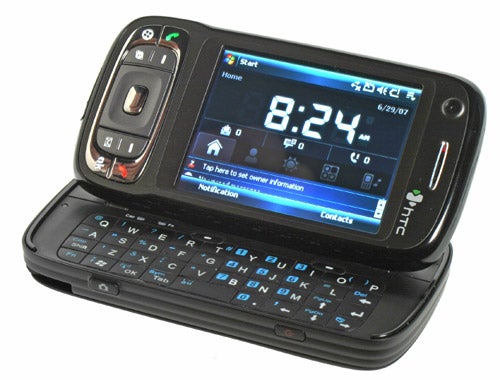 There are other nice touches. First up is a pair of soft keys that sit just above the keyboard. These can be used to access Windows Mobile’s menus without having to reach up to poke the touch screen all the time. But I also liked the fact that the P4550’s clickable scroll wheel falls conveniently to hand whether you’re using the phone in portrait phone mode or landscape keyboard mode, allowing you to nip up and down lists and menus with ease.


As with the Touch, the P4550 applies HTC’s proprietary TouchFLO, thumb-driven interface to the standard Windows Mobile 6 installation. This is a slightly cut-down version and in this guise has even less of an iPhone-beating effect (?) on the Windows Mobile interface than on the Touch. But when it’s not the sole focus of affairs, it’s actually a nice-to-have extra.

Apart from adding an attractive control pad to the Windows Mobile Home screen with a big digital clock display, the weather forecast for your chosen location, plus shortcuts to favourite contacts and applications, TouchFLO also adds thumb-driven scrolling and panning to other applications so, for example, you can navigate through your contacts list without having to pull out the device’s stylus or jam a fingernail into the corner of the screen to grab one of Windows Mobile’s oh-so-irritating skinny scrollbars.


Elsewhere, the HTC P4550 remains powered a 400MHz processor, although this time from Qualcom rather than Samsung as seen in the original TyTN, but this does at least seem to keep things running at a reasonable lick. The phone cold-boots quickly, wakes up from standby instantly and applications generally launch without undue delay. There is sometimes a one or two second pause while flipping the screen into landscape mode when extending the keyboard, but it isn’t slow enough to be irritating.

The amount of storage capacity included as standard is, however, more generous at 256MB. After loading it up with email and contact info, there was 120.41MB left over for files, and 66.21MB left for applications. And battery life is good too. As you’d expect from any smartphone worth its salt, the P4550 will give you anything from two to three days of use on a single charge with occasional use, with that figure dropping significantly if you decide you want to employ it as an MP3 player. However, with its lack of a 3.5mm headphone socket (you have to use the awful bundled USB headset if you want to listen to your music) that’s unlikely to be a common activity for most owners.


As is always the case, if you want to be first to get your hands on a device like this, you’re going to pay pretty dearly, with online retailers charging close to £500 for a SIM free device. Of course you’ll end up paying a fraction of that when the major network operators start to offer the P4550 – in fact we should have a review of the T-Mobile MDA Vario III variant very soon. 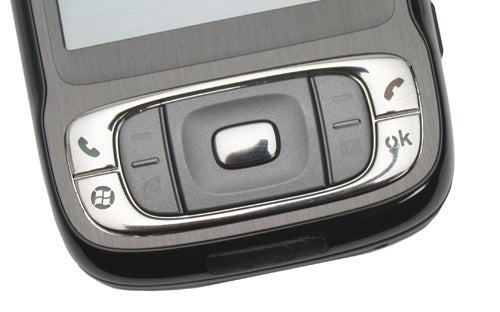 
With the P4550, HTC has taken what was already a competent smartphone and thought really hard about how to make it better. The result is a handset that does pretty much everything you could possibly want a handset to do.


It’ll work anywhere in the world, has fast data connections, a qwerty keyboard for fast and comfortable messaging, a tilting screen and even a GPS receiver for satellite navigation. Most importantly HTC has managed to package it all up in a highly usable, well-constructed and not-too-tubby package.


When the time comes to move away from my current mobile phone contract and upgrade from my current phone, this is going to be the handset I’ll be looking to replace it with. I can’t praise it any higher than that.