The MTeoR is the latest in a long line of Windows Mobile Smartphones, (as opposed to PDA phones), but it is the first to support 3G. As well as UMTS, it also offers quad band and EDGE support. It appears courtesy of manufacturer HTC.


In June, HTC announced that it would start to sell devices under its own name but stated that it would while continuing to also supply network operators with kit for them to brand.


Along with the HTC TyTN, its Windows Mobile connected Pocket PC, the MTeoR may well turn up in due course as a network operator branded device. For the moment though, your only chance to get hold of it is SIM free or bundled with a contract from a supplier other than a network operator. On its own, the MTeoR is quite expensive, so you might want to hold out.


As a 3G handset, the MTeoR can only ever be a partial success because it lacks a front facing camera. Clearly if video calls are not what you want 3G for this won’t matter, but I think that any 3G handset lacking a front camera lets its users down from the start. As it is, the MTeoR is a 3G data device.


Design wise, HTC has really pushed the boat out. The mostly black casing is ever so slightly art deco in its shaping around the number pad area and the finish, which is predominantly matt and almost rubbery to the touch makes a nice change.

The MTeoR is a great looking Windows Mobile Smartphone. 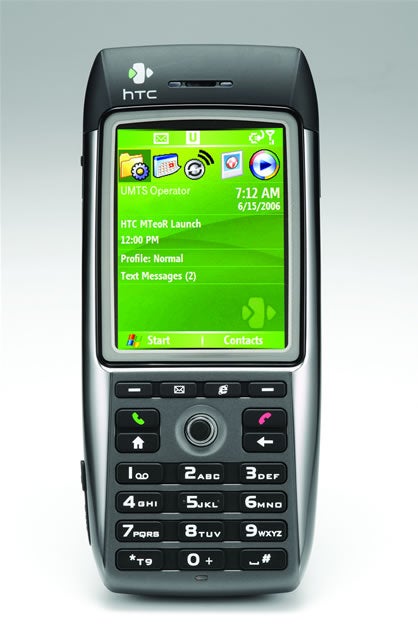 HTC has opted for a mini joystick as the main control mechanism, and unlike some earlier attempts this one is responsive and feels comfortable under the thumb.

One thing that makes this handset instantly recognisable as a Windows Mobile Smartphone is the arrangement of the Call, End, home and back buttons ranged around the joystick. HTC has also reused the idea of having four micro buttons directly under the screen that we’ve seen already in devices like Orange’s SPV C550 and T-Mobile’s SDA II. In this case they map to the two soft menus and take you to the Windows Mobile messaging software and Pocket Internet Explorer.


This range of buttons takes up quite a lot of space and there isn’t a lot left for the number pad, and as a result the keys are quite small. However, good spacing around the keys and a rubbery finish makes it easy to find them without looking too hard.


At 112 x 49 x 15 mm and 120g the MTeoR is slightly taller and thinner than other Windows Mobile Smartphones.

There is, of course, a main camera on the back of the casing for shooting stills and video. It shoots images at a maximum resolution of 1.3 megapixels, surprisingly out of step with current efforts, which can now reach 3.2 megapixels. The shots it produces are of a reasonable quality but there’s no self portrait mirror and no flash.

On the upper right edge of the casing is a side button that starts the camera and next to it is a second button, which with a short press takes you to the voice tag software (you need to create and save tags one by one). A longer press activates the Voice Note software.


On the upper left edge comes a real innovation in the shape of what HTC calls its jog wheel. OK, we’ve seen these before, but they’ve been out of fashion on Windows Mobiles for quite a while and certainly one has never appeared on a Windows Mobile Smartphone before. It does what you’d expect for vertical scrolling and when you’ve highlighted your option you can press it to make your selection.


HTC has augmented the standard Windows Mobile Smartphone software with the ClearVue viewers for Microsoft Word and .rtf documents, Excel spreadsheets, PowerPoint presentations and PDF files, a clear sign that the MTeoR is aimed at business users rather than consumers. You can receive any or all of these by email but viewing on the MTeoR’s 2.2 inch 240 x 320 pixel screen will be hit and miss with some of the document types. 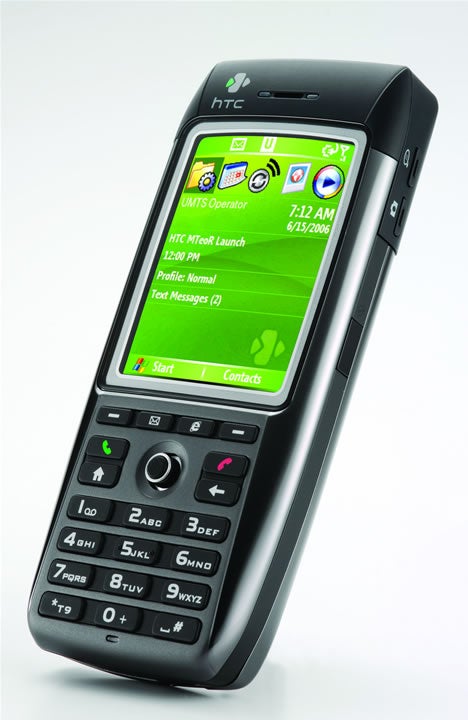 Wi-Fi is increasingly appearing in handsets and we have seen it in the XDA IQ from O2 Windows Mobile Smartphone – but it isn’t here. Bluetooth is and so is infra-red.


The MTeoR comes with 128MB of ROM memory and 64MB of RAM with my review device reporting 66MB of available memory. This represents quite an advance on some earlier Windows Mobile Smartphones. There is good news if you want to expand on this amount as the slot for flash memory is on the left side of the casing whereas in earlier models it was found under the battery meaning you had to power the device down to swap cards.


However, I am not too delighted about the choice of the microSD flash memory card format. Yes these cards are small and help keep hardware size down but they are very fiddly to use. Still, they enable you to add up to 1GB of additional memory.

To test the battery I did the usual – asking the MTeoR to play MP3s continuously and as loudly as possible from a microSD card while the screen stayed on and with the SIM on too. I got nine and a quarter hours of battery life, which stacks up nicely against other Windows Mobile Smartphones.


It is, incidentally, very annoying that there is no 3.5mm connector for a stereo headset. You have to use the provided set which plugs into the mini USB jack which is also used to provide mains power and PC docking.


As a 3G Windows Mobile Smartphone the MTeoR is not all it could be as it can’t cope with video calls. The MTeoR’s rear camera is also disappointing. However, the general hardware design and the addition of the ClearVue document viewers are both plus points.