Androids may dream of electric sheep, but HTC dreams of producing a touch-powered phone that can really give the iPhone something to worry about. With the Hero it pretty much manages to turn that dream into a reality.

We know you’ve probably looked at the photos of the Hero (or G2 Touch as T-mobile calls it) and thought that it’d be a good looking phone if it’s wasn’t for the jutting jaw line. However, when you actually see it in the flesh the jaw line isn’t anywhere near as offensive to the eye as it looks in the snaps and certainly not as bad as it was on the original G1. This is because the Hero has a more refined styling than HTC’s previous two Android efforts. Whereas the G1 and Magic looked quite industrial, the Hero has what we can only describe as a sort of retro sci-fi look, especially in the way the rear of the handset curves around to match the profile of the jaw line. Think hardware in Kubrick’s ”2001: A Space Odyssey” and you’ll get an idea of the sort of design feel that it conjures up when you hold it in your hand. 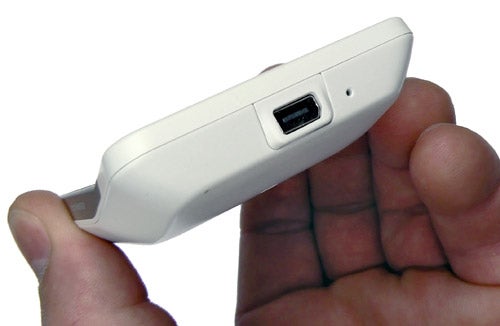 HTC has also rejigged the layout of the buttons on the front of the phone. Now the call/answer and end buttons are laid out in a line with the home and menu ones. The search and back buttons sit beneath these to the right of the mini trackball that glows white when you have an incoming call or text message. Sensibly, HTC has added a standard headphone jack on the top, so there’s no more messing around with headphone to miniUSB adaptors when you want to use your own cans. 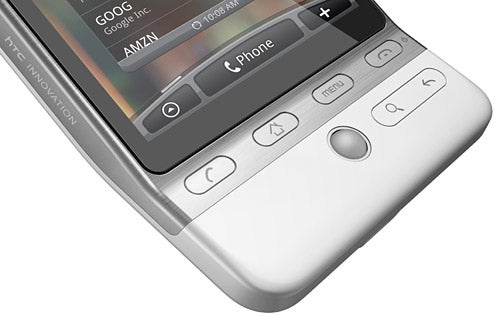 As well as the styling, the screen has also been substantially improved. Although it has the same resolution as the HTC Magic at 480 x 320 pixels, it’s a capacitive screen and is much more accurate when it comes to registering finger presses. In fact, it’s so good we’d say it’s on a par with the iPhone which, let’s face it, has set a pretty high benchmark. The increased accuracy makes every day tasks like hitting the right link among a group of tightly packed links in the web browser much easier, but also vastly improves the usability of the updated onscreen keyboard. These updates combined with the Hero’s strong predictive text engine mean you can now happily tap away on messages or emails without having to worry about correcting every single mis-typed letter. 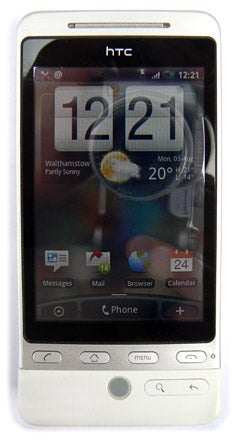 Elsewhere the spec is similar to previous HTC Android devices. The phone’s Qualcomm processor runs at 528MHz and is paired with 512MB of ROM and 288MB of RAM. There’s HSDPA support for download speeds of up to 7.2Mbit/s on the 900 and 2100Mhz bands and you also get quad-band GSM support with GPRS and EDGE for when you’re out of the range of a 3G signal. Connectivity is rounded out by Wi-Fi and Bluetooth 2.0+EDR. As with most of today’s smartphones there’s also onboard GPS plus a digital compass. The pre-launch version of the handset shown at the preview event suffered from slow downs, but that’s not the case with this final, retail version. Except for the odd moment here and there (listening to music while viewing a Flash-heavy web page, for example), it feels fast and responsive.

Unlike the iPhone, the Hero only has a minimal amount of built-in memory available for storage, so pretty much all your files have to be stored on microSD cards. In fact, you have to have a microSD card installed for certain functions, such as the camera, to operate. The card slot is under the battery cover, but cards can thankfully be swapped without having to remove the actual battery. The phone ships with a 2GB card, but cards of up to 16GB are supported.

Despite the 3G support, there’s no front-facing camera. However, the rear camera has a decent 5-megapixel resolution and boasts autofocus. Outdoor shots look reasonably good, but indoor shots are less impressive, which isn’t all that surprising as it lacks a flash. The major problem with snaps taken indoors is that colour accuracy is poor leaving you with muted looking colours. Furthermore, the autofocus often struggles to focus properly in lower light. When the camera goes to take a snap, it tends to tighten up the focus and then let it slide just before it takes the shot leaving you with a blurry photo. 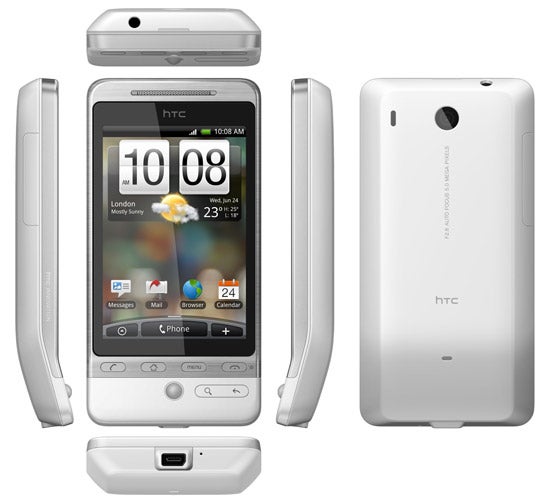 There’s no doubting that specs-wise the Hero is definitely an impressive handset. However, as anyone who has used the iPhone will know, sometimes a phone transcends mere specs and luckily, this is also the case with the Hero. In terms of the overall user experience, the Hero is the best Android handset yet and by some margin.

There are a number of reasons for this. First off, a big boon is the presence of multi-touch support that works in a similar way to how it does on the iPhone. Android users have been crying out for this and finally it’s arrived. On the Hero, you can pinch your fingers together on the screen to zoom in and pinch them apart to zoom out on web pages in the browser and pictures in the photo gallery. It works brilliantly and makes the web browser much more intuitive to use. However, one anomaly is that multi-touch zooming isn’t supported in Google Maps. Instead, here you have to rely on the onscreen magnifying glass icons to control the zoom level, which is annoying. 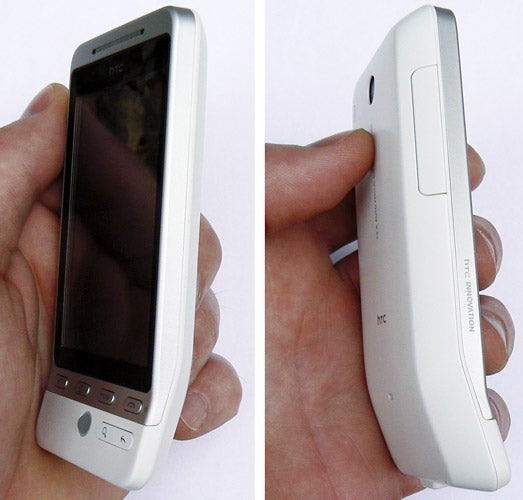 The other big addition is support for Flash in the web browser. However, the Hero doesn’t really fully support Flash. Some Flash content works, but by no means all of it, and that which does work can be a tad slow when displayed within a page – usually things speed up when you double tap on the Flash window to make it go full screen. It’s also very fussy as to what video and audio it’ll play. The YouTube site works fine, but BBC iPlayer streams are displayed with such a low frame rate that they were unwatchable and many other streams that we tried simply told us to update our version of Flash. Still, it works well on most smaller bits of Flash code that you’ll find dotted around websites, and so does help the browser deliver a more desktop like browsing experience than say the iPhone.

And last but not least there are the ‘Sense’ user interface additions that HTC has brought to this version of Android. Basically, HTC has taken some of the best bits of the TouchFlo interface it has been using on its Windows Mobile devices and added them to Android in the form of widgets – small applications that can sit on their own home screen. Previous Android phones included a small number of widgets, but here HTC has added another 14 ranging from a weather widget to one that shows your email inbox, along with a number of switches for turning on and off things like Wi-Fi and GPS.

The cool thing about HTC’s widgets is that they feature real time updates. For example, the email application shows a stack of papers with the latest email you’ve received shuffled to the top. However by swiping your thumb up or down over the stack of paper you can move forwards and backwards through your inbox without having to open the mail email client, although if you do want to see the full message you simply double tap it to open it in the mail application. The weather widget also updates in real-time according to the current forecast, and features neat animations such as a windscreen wiper that wipes away falling rain droplets when it’s pouring down outside.

Widgets can be added to a home screen at any time simply by pressing on the large ‘+’ button on the main menu bar. You can then move them around just by tapping and holding on their top bar and you can delete them by dragging them to the bin at the bottom of the screen. As well as calendar, stocks and clock widgets, there are also two top-notch widgets for Facebook and Twitter.

To make room for all these widgets HTC has increase the number of home screens available from three to seven. The home button always returns you to the main home screen and then the other six are accessed by swiping left or right with your finger, so navigation remains very straightforward. 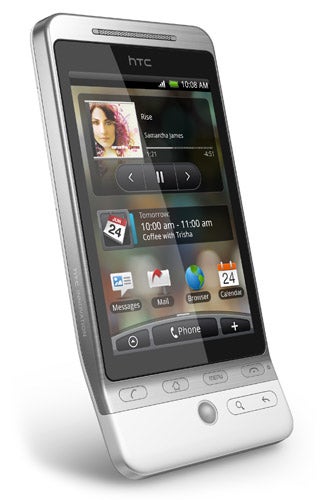 On top of this, HTC has also added support for multiple different scenes. These are basically groups of home screens that you customise with different wallpaper and widgets, save and then recall at any time. So, for example, you can set up a work scene with work related widgets and a leisure scene that’s loaded with your social networking widgets.

Given the choice at present we’d still opt for the 3GS over the Hero, as the iPhone interface is ever so slightly easier to use (Android is still a little bit too heavy on the menus and buttons in our opinion), but also because there’s such as a great range of applications available for the iPhone. However, if Android continues to turn up on excellent phones like this then the range of available apps is sure to increase dramatically over the coming months.

The HTC Hero is truly a superb phone and a real competitor to the iPhone range. The addition of multitouch, the flawed but still useful Flash support, plus the excellent HTC widgets make it a joy to use and place it significantly ahead of any previous Android phone.

The G1 may have got Android off to a slow start, but the Hero shows that it’s now fully up to speed. Make no mistake, the Hero really is a fabulous phone and its price is very attractive compared to the expensive iPhone 3GS. 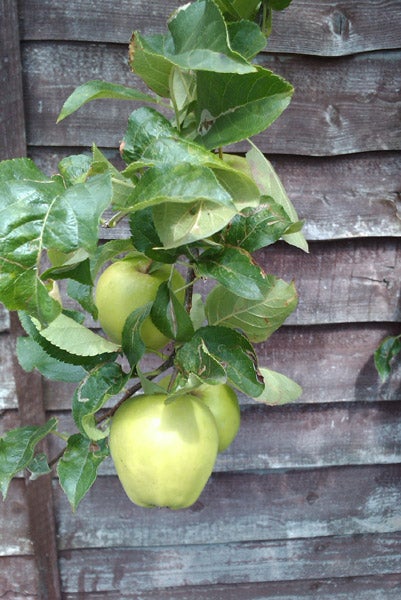 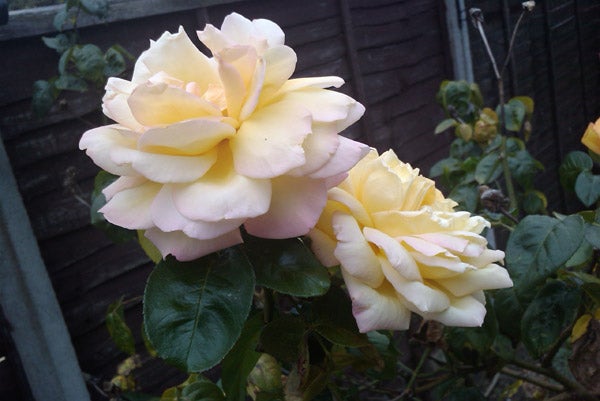 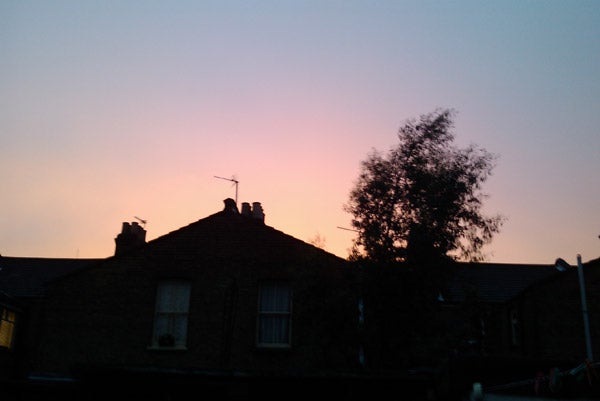