The HP ZBook Create G7 is extremely fast, it's got a fantastic screen for creative work and it has a sleek chassis that boasts impressive connectivity and a high-quality keyboard. For many people, it's an ideal creative option that offers more power at better prices than rivals from Dell and Apple. However, the hot exterior, middling battery life and keyboard layout issues may prove too difficult to ignore depending on your workflow.

The HP ZBook Create G7 is a high-end workstation and, as the name suggests, it’s aimed at photographers, video-editors and other creators who need huge performance inside a sleek chassis.

The Create G7 looks the part, and it’s packed with power, including hefty Nvidia and Intel cores. But to get all of this alongside a stunning 4K display, you’ll have to pay a huge £2807. Is it worth the steep price?

The G7 looks and feels superb. The aluminium base has smart bevelled edges, neatly-milled air vents and a smart Bang & Olufsen grille, and the lid interrupts the same material with a shining ZBook logo. The screen has slim bezels, and the sides have a sleek brushed finish.

Build quality is great too – the base barely budges, the lid is sturdy and the hinges are reassuringly smooth. The G7 also has MIL-STD-810H certification, which means it’s tested and rated to withstand drops, impacts, dust ingress and both hot and cold temperature extremes. 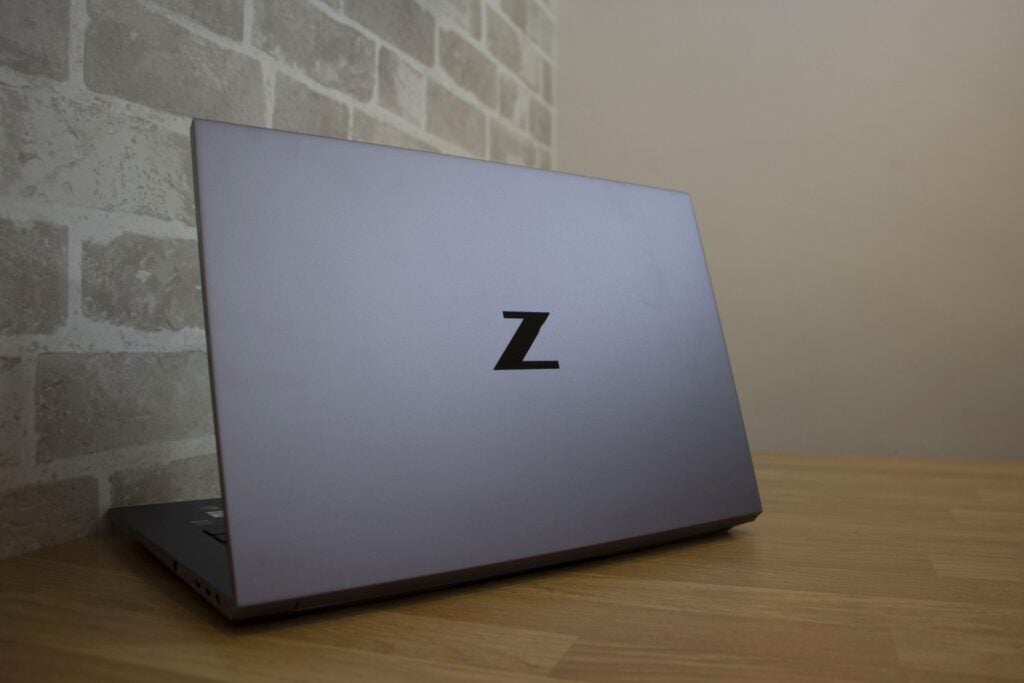 All of this comes in a 1.92kg body that’s 18mm thick and 354mm wide, so it’s hardly a bruiser. The Dell XPS 15 is a little lighter and narrower, while the Apple MacBook Pro 16 is slimmer, but heavier and wider – but the differences are negligible. The HP matches those machines for build quality too.

On the HP’s right side you’ll find two USB 3.2 Gen 2 Type-C ports that support 10GB/s data transfers and Thunderbolt 3 alongside a mini-DisplayPort output and a full-size SD card slot. The left-hand edge has a full-size USB 3.2 Gen 1 port that runs at 5GB/s alongside an audio jack and a Kensington lock slot. Above the screen you’ll find a Windows Hello 720p webcam, and below the keyboard is a fingerprint reader. This machine also has TPM 2.0 and a slew of BIOS security options. 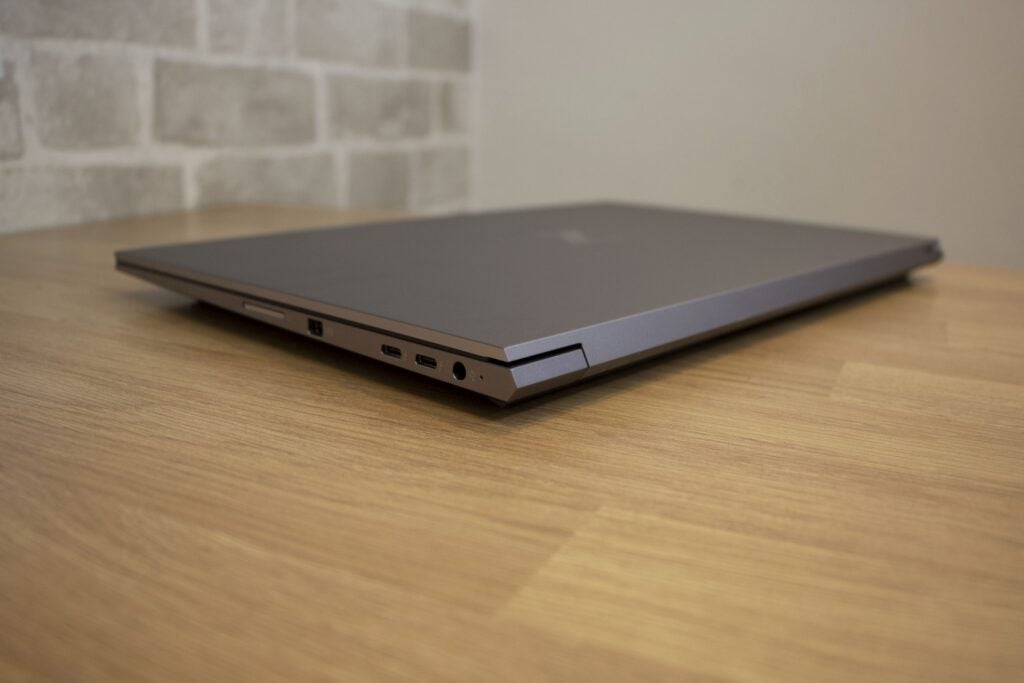 It’s a great slate of connectivity, and in many areas it’s better than rivals – the Dell and Apple machines eschew full-size USB entirely. Still, the inclusion of just one full-size USB connector will irritate some people, and there’s no Ethernet slot, no HDMI and no webcam privacy cover.

The ZBook’s keyboard looks smart, with a sunken chiclet design, and quality levels are good. The keys are fast, consistent and quiet, with a solid amount of travel and a robust base. For a pure typing experience, this keyboard offers similar quality to the Dell and more travel than the Apple. 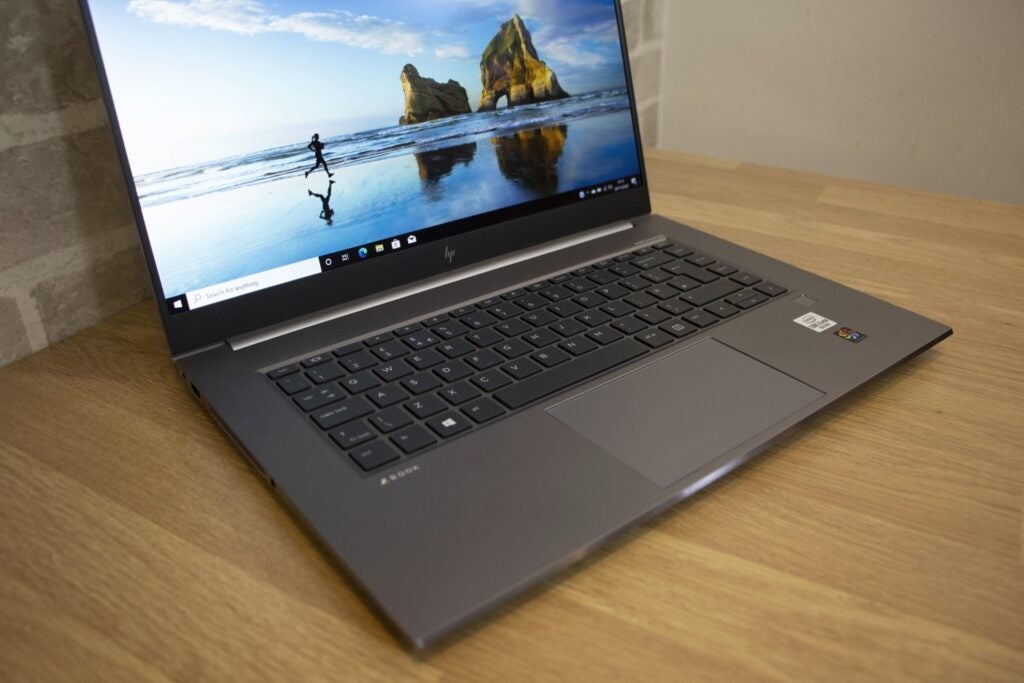 There are a few layout niggles that keep the keyboard from greatness. The power button is sandwiched between the Delete and Print Screen keys, which is irritating, and the function row buttons are small. The vertical cursor buttons are condensed too. The biggest issue for some people will be the omission of a numberpad, which is a little disappointing given the spare metal on either side of the keyboard.

The trackpad offers good quality. Its surface is large, smooth and accurate, with support for multi-touch gestures, and its clicking motion is snappy and satisfying.

The ZBook’s display is one of its best attributes: it’s a 4K IPS panel with 10-bit colour and HP’s DreamColor certification, so it should adhere to the sRGB and DCI-P3 colour gamuts and achieve a peak brightness level of 600 nits.

Quality levels are excellent. The G7’s measured peak brightness of 688 nits is huge – higher than HP’s intended figure – and it pairs with a black point of 0.41 nits to deliver a contrast ratio of 1678:1. That’s about as good as it gets for a laptop IPS display. The colour temperature of 6,251K is solid, the Delta E of 2.75 is good, too. It rendered 99.3% of the sRGB colour gamut and 95.4% of the DCI-P3 colour space. Uniformity levels are decent, meaning the panel is very consistent. 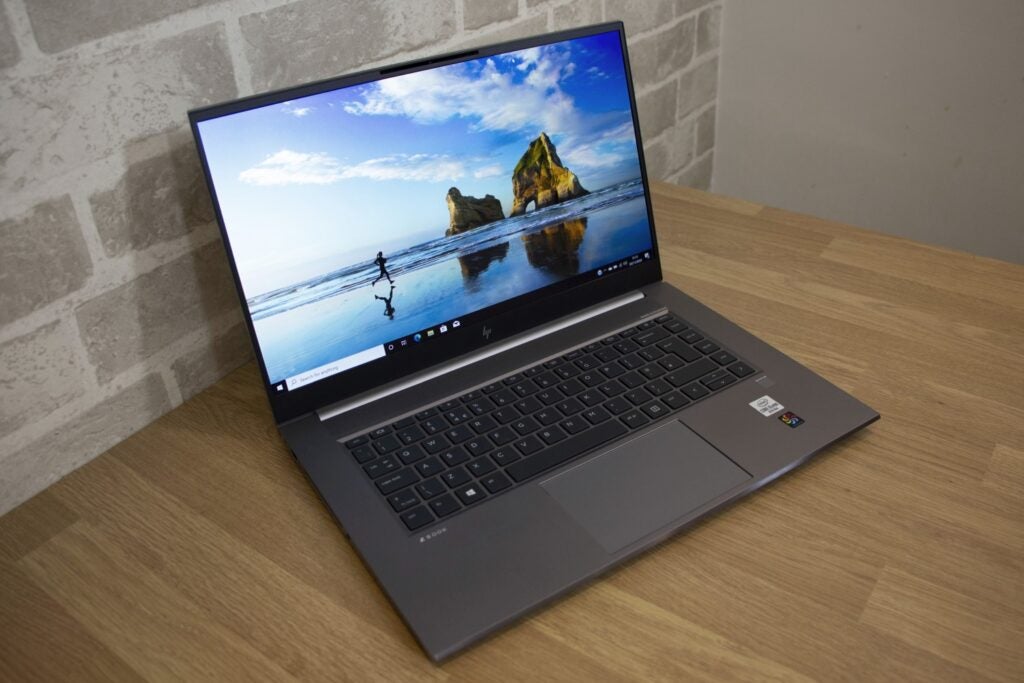 Those solid benchmark results translate to top-class real-world performance that was maintained even with the brightness toned down to a more reasonable level. The high contrast ratio means that this display is vibrant, and the colours are more accurate than most notebooks – and good enough for photo-editing and video work.

The ZBook also exceeds the requirements of the DisplayHDR 400 standard, which means that you get a reasonable boost to HDR content when compared to other laptops. Its gamut coverage figures are good enough to allow for working in both the sRGB and DCI-P3 colour spaces, but it’s not good enough to work in the Adobe space.

This display is better than the MacBook Pro’s panel and it’s just as good as the 4K panel offered in the Dell XPS 15, albeit for different reasons: HP’s panel has more contrast and brightness, but the Dell’s display can handle the Adobe RGB colour gamut.

The speakers are surprisingly good, too – incredibly loud, surprisingly bassy and with good balance. The only issue is the slightly tinny top-end. For everyday media and music, though, the HP is decent.

Processing grunt comes from an Intel Core i9-10885H, which is an eight-core mobile powerhouse. It’s got base and boost speeds of 2.4GHz and 5.3GHz and Intel vPro for added security. It’s joined by an Nvidia GeForce RTX 2070 Max-Q, which means the usual 2,304 stream processors and 8GB of memory alongside cut-back clock speeds of 900MHz and 1,125MHz.

There’s a generous 32GB of dual-channel memory, and a 1TB Samsung PM981 SSD that delivered superb read and write speeds of 3,440MB/s and 2,871MB/s. Internal connectivity is handled by dual-band Wi-Fi 6.

The processor delivered superb benchmark results – as you can see in the table, the Core i9 chip was a little quicker than the Dell’s Core i7 CPU and the MacBook in Geekbench’s single-core test, and it was hundreds of points faster in the multi-core benchmark. It had a healthy lead in PC Mark 10, too.

*MacOS does not support PCMark 10 or 3DMark Time Spy

The RTX 2070 Max-Q  GPU is rapid. Its 3D Mark Time Spy result of 6565 is nearly twice as quick as the Dell, which used a GTX 1650 Ti, and in Cinebench R15’s graphical test it scored 138.12fps – more than ten frames behind the weaker AMD GPU inside the MacBook. In the Dirt Rally and Horizon Zero Dawn benchmarks at Full HD and max graphics settings the HP returned framerates of 109fps and 55fps – the Dell could only manage 42fps and 38fps.

These results translate to stonking real-world performance. The ZBook can easily handle photo-editing, and it’ll allow you to edit and encode 4K video – in terms of content creation the HP will handle most things and it outpaces both rivals. It’s also versatile and responsive for everyday workloads. If you’re interested in gaming, this laptop will play any single-player title at 1080p but it’ll only handle the toughest 4K games if you dial back the settings. It’s not really suitable for competitive eSports due to the display’s 60Hz refresh rate. 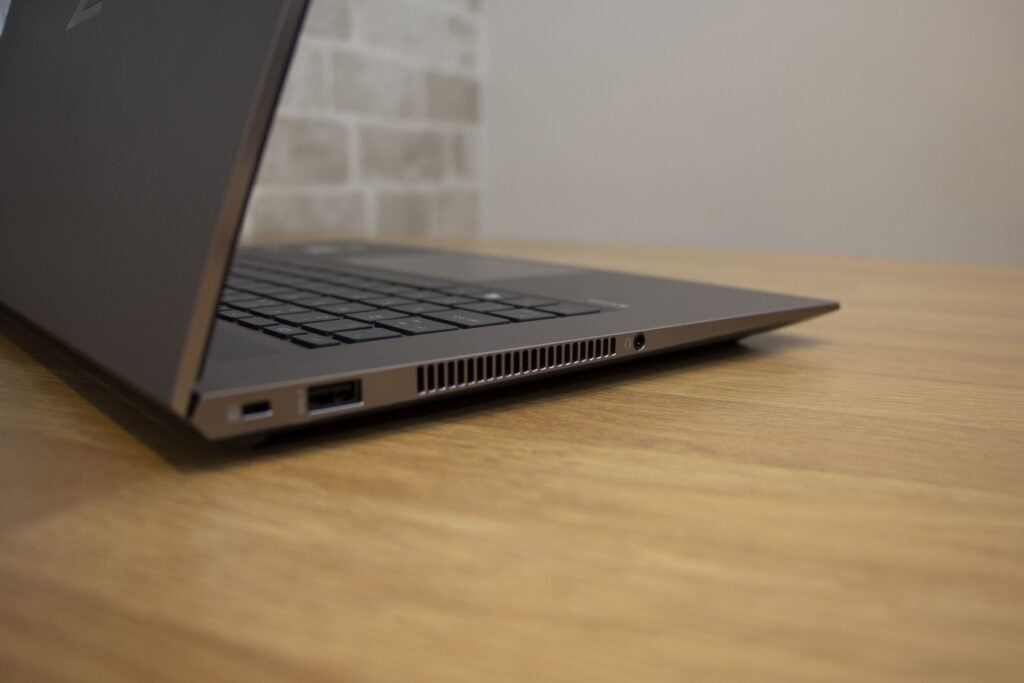 There’s another issue when it comes to performance – heat. I looped Cinebench R20’s multi-core benchmark to imitate content-creation workloads, and the underside of the machine became uncomfortably warm. The wrist-rest was hot too, and the metal around the keyboard became too hot to touch. This issue was replicated in gaming tests, and during these benchmarks the CPU throttled to around 3.6GHz, so it’s unable to hit its Turbo peak.

The noise levels aren’t bad, and the heat levels aren’t a huge issue if you’re using this laptop at a desk – or if you’re not always pushing the components – but it’s disappointing and worth bearing in mind.

That’s reasonable longevity for a system with high-end components like this, certainly enough to handle your commute and most of the morning, but it’s unable to compete with rivals. Both Dell and Apple’s machines lasted for nine hours in the same test.

Also bear in mind that if you’re pushing the ZBook with tough content-creation apps then battery life will take a significant hit. 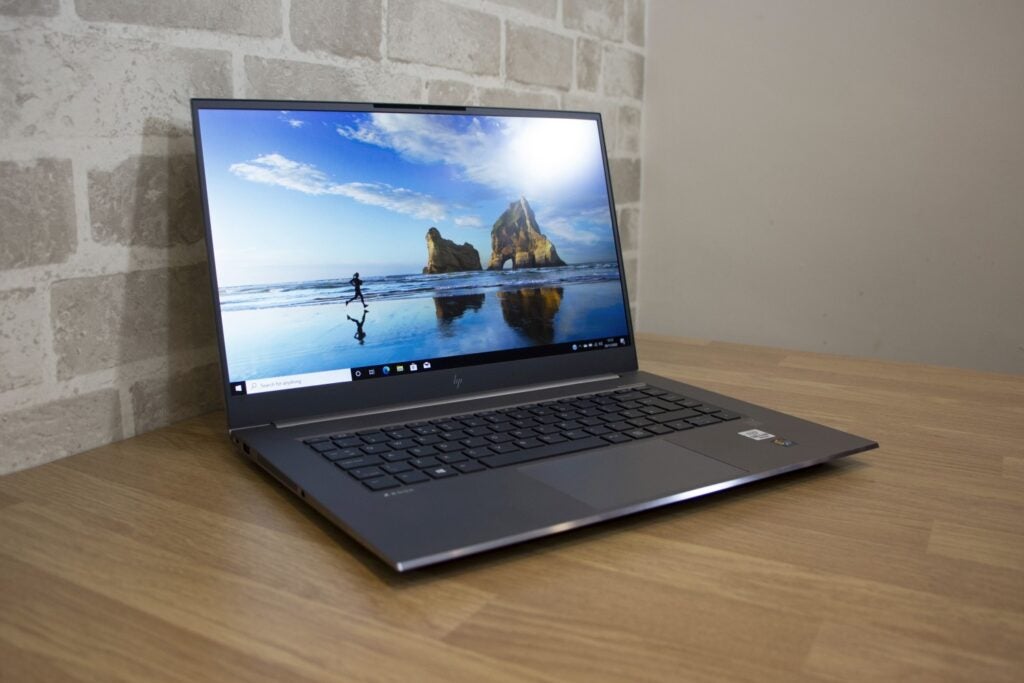 Should you buy the HP ZBook Create G7?

Happily, there are plenty of areas where the ZBook is more impressive than its battery. The keyboard and trackpad offer good quality, the screen is crisp, bright and easily good enough for creative work, and HP’s machine looks impressive, and it has great connectivity and build quality.

On the inside, it offers fantastic power than rivals can’t match. The Dell XPS 15 isn’t available with the RTX 2070, and if you specify that machine with the Core i9 CPU and 32GB of memory, it’s more expensive than the HP. The MacBook Pro uses older Core i9 CPUs and weaker AMD graphics, and upgrading to 32GB of memory takes its price above £3000. This makes the HP ZBook Create G7 very good value comparatively.

There are notable downsides, though. The ZBook gets very hot, it can’t match rivals for longevity, and it has no wired internet and no keyboard numberpad. Whether those will bother you will depend on your workflow.

If you’re not concerned about those issues, then the HP Zbook Create G7 is an impressive machine for high-end content creation on the go.