This is the first desktop PC incorporating a touch-screen that HP has produced. In fact, it’s one of only a few home PCs anybody has produced with a touch-screen. To make this technology worth having, the computer itself has had to be completely rethought. In the process, HP has produced a radically different media PC in the TouchSmart IQ770.


It’s designed to be used as a conventional computer when needed and as a nifty touch-screen Media Center PC with fast, easy access to a wide range of different media and online information. The idea is that you could use it for everything from obtaining a weather forecast before leaving for work through to watching breakfast television or playing a movie, all by tapping the screen in true Star Trek style. Shame there isn’t a Starfleet skin available… 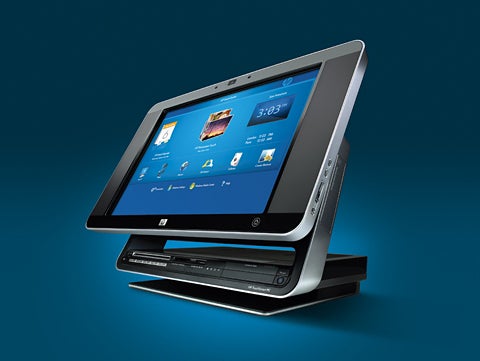 HP has effectively taken a standard desktop box, split it horizontally and lifted the top section up from the back to produce a machine which in profile looks like a capital V resting on one of its arms. It’s then attached a 19in widescreen LCD panel to the upper arm of the V with inset speakers on either side.


The screen itself can be raised and lowered with a similar height range to a high-end LCD monitor and it can be angled from vertical to around 30-degrees back. This is arguably not enough because, in its lower position, it could do with being closer to the horizontal to make the touch-screen more comfortable to use.


The lower front face of the machine is inset with a LightScribe-enabled, DVD-RAM-compatible DVD rewriter, two multi-format memory card slots and a flip-down cover for audio, S-Video, four-pin FireWire and USB2.0 ports. The wireless keyboard tucks away underneath the front lip of the base when not in use. 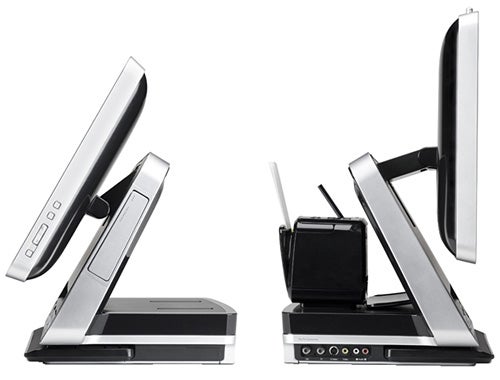 The right-hand side of the machine contains a flip-open bay for one of HP’s Pocket Media Drives – a slot-in hard drive for taking essential data with you. These drives cost between £100 and £130 depending on capacity. The right-hand edge of the screen contains controls for switching TV channels – the TouchSmart comes with a combo DVB-T/analogue TV tuner as standard – together with volume and mute.


At the back are jacks for the integrated 5.1-channel surround sound together with more USB2.0 ports, including one that sits next to a power outlet to accommodate HP’s USB/power printer Y-cable. The latter comes in handy if you own an A510 or A610 series HP printer and decide to dock it on the rear of the IQ770. A six-pin FireWire socket as well as S/PDIF and a new mini VGA format external monitor connector complete the connectivity line-up.

When you consider the specification of this PC you need to think feature-set rather than all-out speed. Although the 64-bit, twin-core Turion processor is no slouch, it runs at 1.6GHz, so is no athlete either. It’s adequate for the majority of tasks the machine will be set to do, such as running TV, DVD movies and working with the Internet, but factor in the nVidia GeForce Go 7600 graphics chipset and it may struggle with new games. 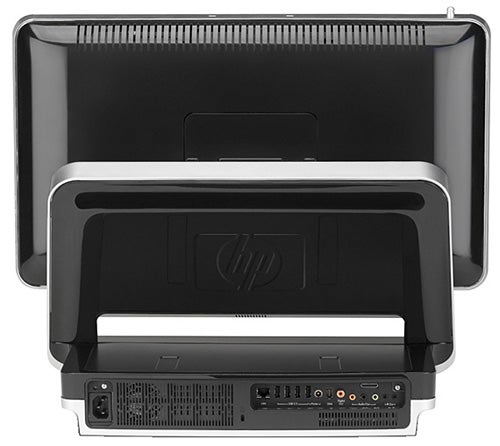 The choice of processor and graphics chipset also show that the machine is largely built on notebook rather than desktop technology – the processor is fitted with a heat pipe to conduct heat away to where it can be blown out of the back of the machine. A good place to warm your hands on cold days!


Inside there’s a healthy 2GB of SO-DIMM memory and an equally healthy 320GB SATA hard drive – plenty for your data as well as storing TV recordings and video made with the 1.3-megapixel webcam set into the top of the screen. Both WiFi and Bluetooth wireless standards are supported so if you have a wireless router you can be linked up in a couple of clicks.


HP supplies a copy of Windows Vista Home Premium with touch-screen extensions for operating Media Center, as well as a full copy of Works 8.5 and various useful utilities for recording DVD. HP’s SmartCenter is also included, offering a simple front-end for accessing TV, the Internet, music and photos, a calendar and even a game of solitaire. 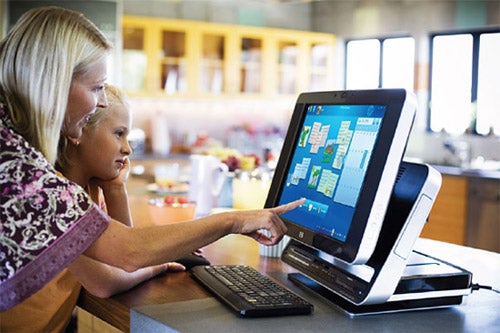 The TouchSmart IQ770 isn’t designed as a games vehicle and clocked up just 3,828 in PCMark 05, but apart from the occasional pause which seemed to be more down to hard drive access than processor shortfall, the machine coped with all the day-to-day tasks I threw at it. The touch-screen is definitely a very easy way of interacting with a PC and I doubt this is the last time we’ll see it incorporated into a home PC.


HP has done a very good job of creating a home machine with all the bells and whistles. They’re well integrated and in general make the PC easier to use than most Media Center devices I’ve examined. There’s a price premium on the TouchSmart IQ770 and even with £100 off when buying from Comet, £1,200 would buy you a much higher spec conventional PC. This is horses for courses, though, as the HP machine is ideally suited to a family environment – or for preventing starship core breaches.