This is a business scanner, designed to scan up to 35ppm through its Automatic Document Feeder (ADF), and duplex-capable, so that both sides of each page can be scanned at once.


This has to be one of the most ugly, brutalist bits of industrial design to have come out of HP in a while. For a start, the ScanJet N8460 is huge; it measures 625 x 415 x 265mm, way bigger than the A4 pages it’s designed to scan. It’s deeper at the top than it is in the middle and the bottom of the scanner flares out again, so from either end it looks a bit like a Wild West caboose. 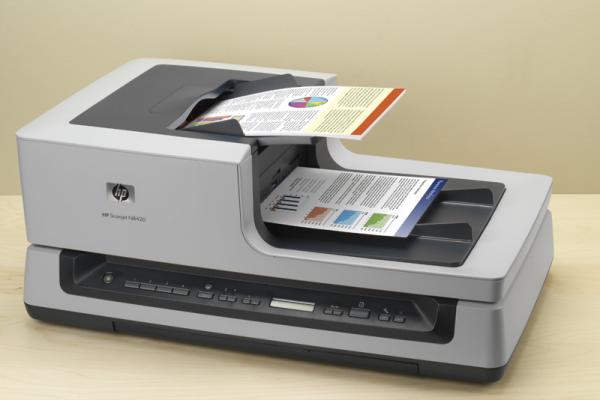 The ADF is 130mm high on its own, which seems much higher than it need be, given that it only handles up to 100 sheets at a time. The whole, heavyweight cover is mounted on massive, counter-sprung hinges at the back, covered by little plastic flaps. It’s only saving grace in the looks department is its full-width control panel, running down the long edge of the scanner, where the buttons and small, 16-character LCD display are given enough room to make their purposes pretty clear.


From the left, there’s a power button, four soft function keys, which can be set to specific scan or copy functions, and dedicated copy buttons to select number of copies and colour or black and white. The scanner obviously has to work in collaboration with a suitable printer for copying.


Next on the panel come three Scan To buttons, which work with the LCD display so you can select an application as the target of a scan. Finally, there’s a Tools button, which leads into HPs Scanner Tools Utility, and a Cancel button which stops the current job.


There’s plenty of heavyweight software supplied with the ScanJet N8460. As well as programs like Nuance’s PaperPort 11 document manager and Readiris Pro 11 for OCR, there’s a full copy of Kofax Virtual ReScan 4.1. This software does handy things like rotating scanned pages, so they’re all the same way round, detecting colour and black-and-white images in mixed jobs and detecting and removing blank pages. It also cleans text characters up, so it’s easier for OCR software to convert them to editable text.

Another feature of the ScanJet which should endear it to busy departmental users is its ability to sense when two pages have fed through the ADF at once. It uses an ultrasonic sensor to detect when this happens and alerts you, so you can feed them again. Scans can be made to PNG, TIFF or JPEG files or directly to PDF and they can also be made into an application such as Word, using Readiris.


HP claims the ScanJet N8460 can scan up to 35ppm, though under test it took 1 minute 11 seconds to complete 35 single-sided pages at 200ppi. A10-page duplex document scanned in 46 seconds at 300ppi, so we could see the company’s speed claims being met, depending on the scan resolution.

You might expect scans produced at this speed to be comparatively low quality, but this is where the price of the HP machine is earned. Running the 20-page duplex document through Readiris OCR produced an RTF document in Word which had surprisingly few errors and would certainly be suitable for use in a typical office. If it was going to be sent to a customer you might still want to proof it by eye though.


If the majority of the pages you intend to scan will be left as bitmap images, then the impressive speed of the ScanJet is a definite asset. If they all have to be run through Readiris though, some of the advantage of the scan speed is lost in processing the pages. Particularly, if both operations are conducted on the same PC, you lose much of what you’re paying for in this fast scanner. 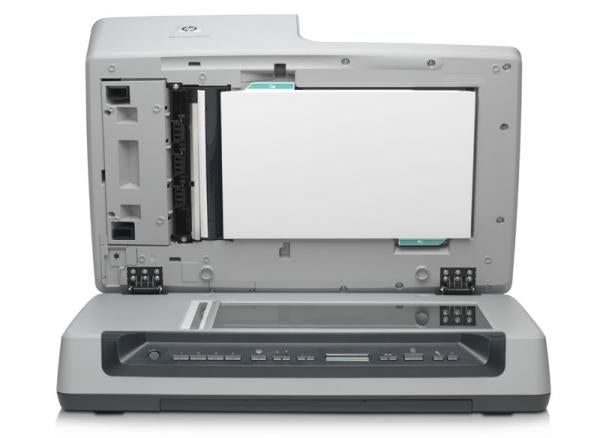 When you take into account the speed at which the ScanJet N8460 scans and its ability to recognise both sides of a page at once, the high cost of the machine seems less of a drawback. The full copies of high quality, professional software such as Kofax Virtual ReScan add considerably to the conversion accuracy of OCR and all the software is supplied in full, not Special Edition, versions.


There’s no doubt that this kind of medium-resolution, high-speed document scanning is something of a niche market, but there are still plenty of offices where the ability to convert printed pages into electronic documents is essential to business. In this environment, the ScanJet N8460 will more than earn its keep.