Improvements in IT technology now filter down from top of the range to budget models in only a few months. Nowhere is this more obvious than with printers and All-in-One devices, where last year’s cunning innovations are this year’s mainstream features. Just to prove this point, HP has released the PSC 1610, a sub-£100 All-in-One aimed at the home user and digital photographer, which includes most of the goodies reserved last year for machines costing over twice as much.


Let’s get the bad news out of the way first; the PSC 1610 doesn’t have a colour LCD display for viewing your photos. It would be pretty surprising if it did, given the price point, but it does have a two-line, alphanumeric LCD with, praise be, a backlight. This makes it very easy to read and with HP’s well-designed menu system, the device is very easy to control.


The machine has a conventional design and looks much like several earlier PSC models. The main difference is that it’s smaller and its paper trays fold neatly out of the way when it’s not in use. This is ideal for the person who only prints or copies occasionally. Paper feeds from the tray at the front and ejects directly on top of the input pile, with no separate output tray. 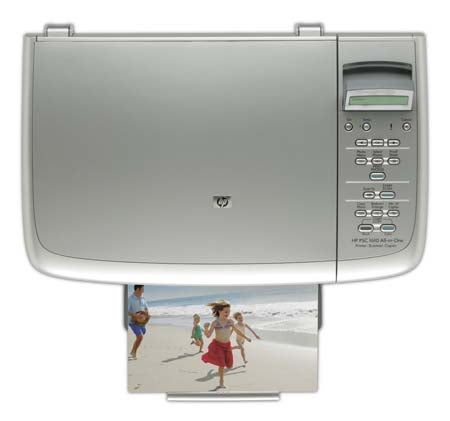 In between, each page is printed on by twin ink cartridges, one black and the other tri-colour. For top-quality photos, you can replace the black cartridge with a three-colour photo one. Cartridges are easy to fit, as the top section of the PSC 1610 hinges up for access. The device includes a reader for all the common memory card types and a direct connection for PictBridge cameras.


On top of the print engine is an A4 scanner flatbed and to the right of this is a comprehensive set of control buttons, including extras for selecting photos and printing a proof sheet. HP’s proofing technique, which enables you to select which images from a camera or memory card to print by colouring in ovals on a proof sheet, has still to be beaten for intuitive simplicity. It goes some way to balance the lack of a preview LCD.


There’s over 750MB of software on the supplied CD, most of which is HP’s ImageZone suite. It includes image editing applications, photo management, HP Director and HP Quick Prints. There’s also a copy of Read IRIS, for recognising text.


The printer driver includes most of the bells and whistles you would expect, including watermarks and imposition of multiple pages on each sheet. There’s good control of photo image quality, with separate sliders and a preview thumbnail for contrast, focus, sharpness and smoothing, as well as effects like red-eye removal and digital fill-in flash.

The PSC 1610 can print on plain paper or HP’s photo paper in any size from 10cm by 15cm, up through A4, to what the company calls large panorama, 215mm by 610mm. All these sizes can be printed borderless and it’s a welcome bonus to have borderless A4 on a machine in this price range.


The print engine has a maximum, optimised resolution of 1,200 x 4,800dpi, though by default most prints come out at a lower setting. It’s matched by the optical resolution of the scanner head and both figures are impressive in such an inexpensive machine. 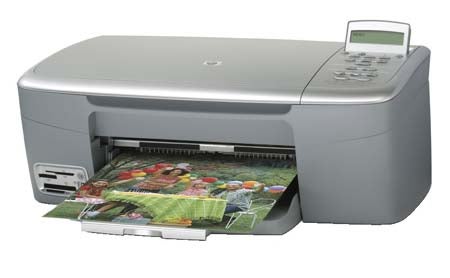 While not the fastest printer on the planet, our five-page text document completed in one minute eight seconds, while the mixed text and business graphics page took just 36 seconds. Copying only took nine seconds longer than printing and a 5 x 3in photo at best quality took one minute 42 seconds. All these times are very respectable.


Print quality is extremely good for an entry-level device. Black text is very full and dense, without any noticeable feathering into the nap of the paper. Coloured business graphics are also clean and there’s no noticeable banding in areas of solid colour. Finally, photographic output is precise, with sharply defined edges, good natural colours and better than average detail in areas of shadow. 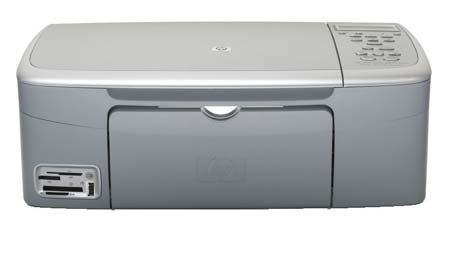 There’s only one black cartridge designed to run in the PSC 1610, but there’s a choice of standard or high-capacity tri-colour cartridges. The lower capacity 343 cartridge is supplied and was used in our calculations, based on the actual number of pages we printed at 20 per cent cover (five per cent for each primary). We only managed 211, 20 per cent colour pages against the claimed rating of 260, which is disappointing and 275, five per cent black pages, against a claim of 450, which is more so.


With a cost for HP glossy photo paper of 28p a sheet – the cheapest we could find – we calculated page costs of 4.9p and 44.9p for black and colour print, respectively. These sit at the high end of running costs for this type of ink-jet printer.


Sales of All-in-One machines have proved what a good idea it is to combine printing, copying and scanning into one, small-footprint device. Being able to read digital photographs from a memory card or camera is an added bonus and with extras such as panoramic borderless print, the only problem with the £90 PSC 1610 are its running costs.