Having recently checked out the 17.3in HP ProBook 4720s to suit those wanting a desktop replacement or large screen business laptop, we’re now taking a look at the other end of the scale: the ultraportable, 13.3in ProBook 5320m. Despite generally only demanding a modest premium, HP’s ProBook range has the build quality and elegance to make it a desirable option even for home users, so let’s check it out. 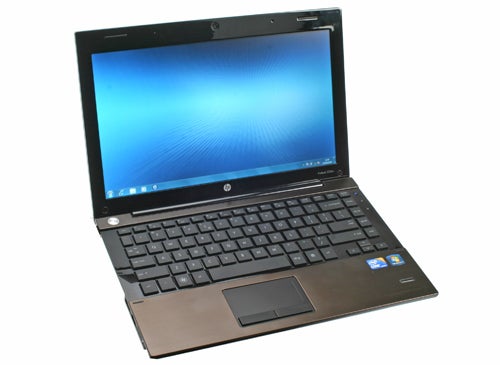 The first thing you’ll notice on taking this laptop out of its box is its feel of class, thanks to a brushed aluminium mocha-coloured top and a soft-touch black underside that’s simply lovely to hold. HP’s 5320m is a bit on the heavy side, starting at 1.72kg with a four-cell battery and our model, with its 62 Watt-hour battery, going up to 1.83kg. However, a lot of this weight is down to the laptop’s magnesium-alloy chassis, which is a good thing.


Some might bemoan the 5320m’s glossy screen bezel, but it does add to the premium look and the screen itself is matt. The keyboard surround is likewise piano black, but keys are matt and the palm-rest is covered in the same brushed metal as the lid, so fingerprints won’t be much of an issue. The final touch is a large, white-backlit metallic power button that somehow doesn’t seem out of place. 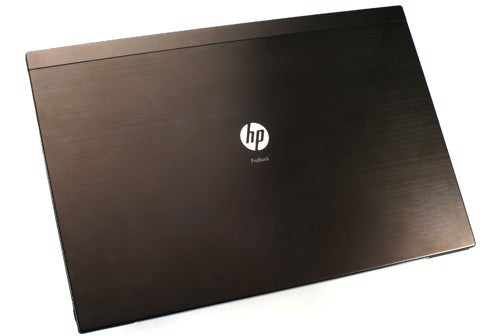 It’s not a case of all looks and no substance for this laptop though, as its specifications are generally impressive. A dual-core Intel Core i5 450M with hyperthreading support for four virtual cores runs at 2.4GHz standard and can Turbo-clock to 2.66Hz. It’s backed by 4GB of 1,333MHz DDR3 RAM, which with its single DIMM slot is the maximum this laptop supports.


Unlike the model of the 4720s we looked at, which despite carrying the same amount of memory sported a 32-bit OS for greater compatibility, this 5320m comes with a 64-bit version of Windows 7 Professional, though downgrades to a 32-bit version and even Vista are available. To be honest we can’t think of a single reason a user would opt for Vista over 7, and XP would have been a more logical option. 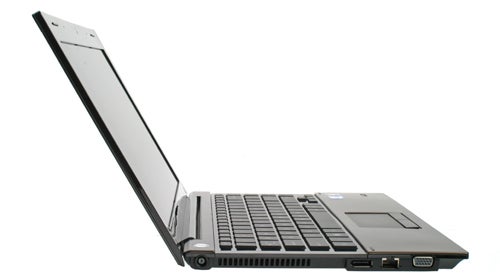 For permanent storage there’s a generous 500GB hard drive running at a speedy 7,200rpm, and if that’s not fast enough for you an SSD upgrade is available. When sticking with the moving parts drive, you’ll be glad to hear it’s well-protected by HP’s 3D DriveGuard system, which combines shock-dampening material, a magnesium drive cage and an accelerometer that locks the drive heads when sudden, sharp motion is detected.


The only weak link in this list is Intel’s CPU-integrated graphics, which will do a fine job for daily productivity but preclude you from any half-way demanding 3D gaming or graphics. On the other hand, that’s hardly much of an issue for a business machine, and battery life should be better than with a discrete card.

Connectivity is nothing exciting, if a bit unusual in its layout. On the 5320m’s left side we have VGA and DisplayPort video outputs. The latter is a common enough replacement for DVI/HDMI on higher-end business machines, though as this is still a relative rarity in monitors we feel it’s a somewhat restricting choice. Between these is nestled a Gigabit Ethernet port. At the right is a small SD memory card reader, a single 3.5mm jack that acts as both headphone and microphone connector (another potentially annoying restriction) and three USB 2.0 ports, one of which is powered. 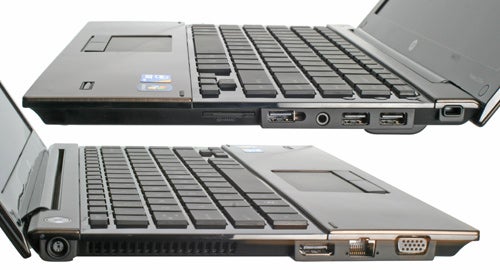 HP hasn’t managed to squeeze an ExpressCard slot or optical drive into the chassis, and though it does sell a matching USB-powered external DVD rewriter, the premium this demands means you’re better off just buying a generic one. For wireless transmission we have 802.11n Wi-Fi and Bluetooth 2.1, and it’s always nice to see a dedicated physical wireless switch (backlit in blue when active or orange when turned off) to the side of the keyboard. A HSPA/3G mobile broadband module is optional.


As usual with HP laptops, the spill-resistant keyboard here is a pleasure to use. The matt, tile-style keys feature a DuraKeys finish that’s supposed to be hard-wearing, are well-spaced, and offer light but well-defined feedback. The only possible issues worth noting are that there are no shortcuts on the cursor keys, and that our review model actually had a US layout. This means a smaller Enter key, and we can’t confirm whether the UK layout rectifies this. 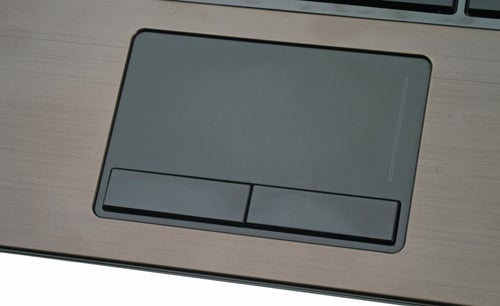 Likewise, the well-situated touchpad is great. Its finish scores just the right balance between softness and smoothness, and is clearly delineated by being slightly recessed. The pad supports multi-touch, and its separate buttons are large, nicely raised and offer a positive click. A fingerprint scanner is discreetly set into the laptop’s right palm-rest.


Getting onto image quality, the 13.3in display sports a 1,366 x 768 resolution, which gives a good balance between desktop real estate and legibility. Its performance is only mediocre, however. Grey-scale differentiation is below average, managing neither the darkest nor lightest shades. Viewing angles, both horizontally and vertically, are also not the best, though with a business machine this could be considered a ‘privacy-enhancing feature’. Last of all there’s some very minor light bleed from the bottom corners. However, backlighting is even, there’s no sign of banding and colours are fairly realistic, which combines with excellent sharpness to make it competent for its intended market.

Aurally, the 5320m is also middle of the road. Its speakers produce reasonable volume levels without distorting but are tinny at the best of times. Again, perfectly adequate for business use but films will require a dedicated set or some decent headphones.

Once you get above Intel’s Core i3 series, performance should be adequate for even more demanding users, so this 2.4GHz Core i5 is sure to be up to whatever you’d care to throw at it, as demonstrated by its excellent performance in the PCMark Vantage tests. Of course, you can get cheaper versions of the 5320m sporting slower CPUs which will still suffice for most, but for those looking for desktop-like processing power in a 13.3in laptop, this 5320m is a prime candidate.

Predictably, Intel’s integrated graphics aren’t up to much, and while they finally make for playable frame rates in the very undemanding TrackMania Nations Forever, this was with AA turned off, where it’s usually set to 4x in our tests – something to bear in mind when comparing results.

Battery life measured at seven minutes short of six hours in the semi-intensive Productivity test – impressive indeed considering this laptop’s powerful processor and speedy hard drive. While it might not be enough for die-hard road warriors, the average business trip will be more than covered, and lowering screen brightness below 40 percent could last you a full working day without needing to plug into the mains.


However, the HP 5320m is up against some pretty stiff competition from Toshiba Portege R700. For just £10 more, the Toshiba gives even better battery life, an integrated optical drive, more connectivity (including eSATA and an ExpressCard slot) and an even nicer black brushed metal chassis, yet keeps weight below 1.5kg! Despite the HP’s larger hard drive, faster CPU, double the R700’s memory and a superior keyboard, Toshiba’s further inclusion of Trusted Platform Module (TPM) and much longer three-year warranty will probably sway many in its favour, especially since for most small business applications, the R700’s lower internal specifications are not a significant factor.


As we’ve come to expect from HP’s ProBook range, the 13.3in 5320m is an attractive and well-built machine offering decent value when you consider its high-end specifications. However, compared to some rivals it doesn’t do enough to take pole position.