Like its stablemates, the Plus is decked out in textured and high gloss black and has a raised panel sticking up in front of the flatbed scanner lid, which contains a 61mm touchscreen with dedicated touch buttons down either side. Its position makes the screen very easy to use, as does the sensitivity of the panel itself. 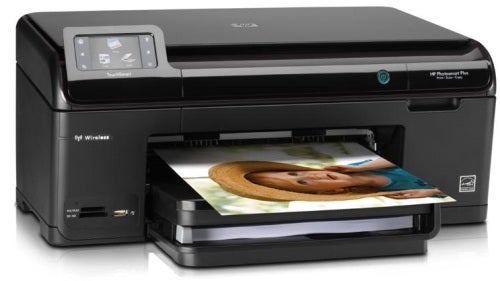 Below the control panel are two memory card slots, which between them can take SD, MemoryStick and xD cards. There’s also a PictBridge socket that will also read USB drives.


There are two paper trays integrated into the front of the machine, a 150-sheet one for plain paper up to A4 size and another for up to 20 sheets of photo paper. The photo tray automatically powers into the printer when you select to print on this media. Pages feed out to the top of the paper trays, though you have to extend a support and paper stop, considerably increasing the overall footprint of the Photosmart Plus.


This is a four-colour printer, which can take either standard or XL cartridges in the CMYK inks. The cartridges, which look oddly similar to Canon consumables, clip into the print head and the machine then completes an alignment page, which has to be scanned back in, before the first prints can be made. 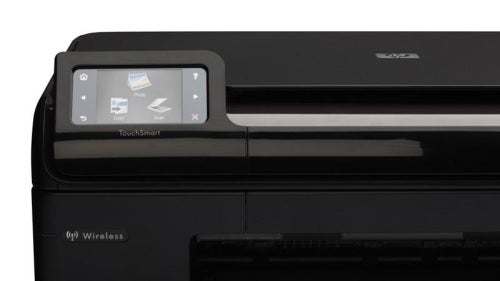 Drivers are provided for Windows and OS X and Linux alternatives using the CUPS protocol can be downloaded from the HP site. In addition there is the usual mix of HP utilities, including Solution Center, and a copy of Windows Live Photo Gallery.


The printer can be connected via USB or Ethernet, but also offers wireless connection, though you have to connect temporarily via USB (a cable is supplied) to set up the link. This can be awkward if you’ve bought the machine because you have space restrictions on your desk.

The biggest snag with the working of the Photosmart Plus B209a is the same as with the Photosmart Wireless. It can take a long while for a print job to start, as the printer checks itself and primes its engine. During our tests, it took 79 seconds before starting to print one five-page text document.


The ISO speed standard says timings can be measured from the start of the paper moving from the input tray, which excludes preparation time. That’s very convenient, as it gives very much a best case result. We have no idea why the printer has to take this long fidgeting around.


Leaving aside the erratic delays at the start of print, which occur maybe once every five prints or so, print speeds are pretty good for this class of machine. Our 5-page text print returned a speed of 7.69ppm and the 20-page test increased this to 9.92ppm. The 5-page text and graphics print produced a speed of 5.08ppm. 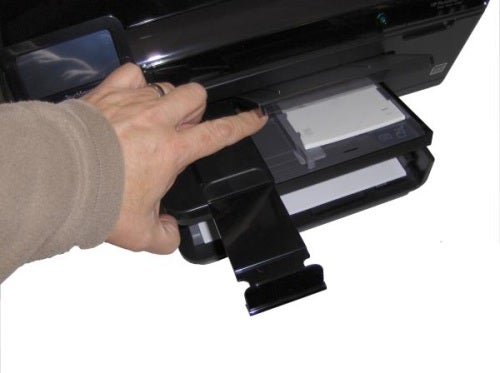 10 x 10cm photo print speeds are slower than from some of the machine’s rivals, particularly all-in-ones from Canon and Epson. The HP machine takes around a minute, irrespective of source, while recent tests of the PIXMA MP990 and Stylus Photo PX710W produce print speeds of about 30 seconds. Even so, a minute a print isn’t out of order.


Print quality is pretty good throughout. Black text shows very few signs of ink run and even at small point sizes characters are well formed with only slight jaggedness. Business graphics are bright and generally smooth, with no signs of dither patterns and only slight fuzzing of black text over coloured backgrounds. A colour copy also reproduced well, though colours are a little light.


Photo prints are also good, though as with many machines we’ve reviewed, some detail is lost in darker areas of images. Colours are natural, though, and colour gradations smooth. Where necessary, the machine can produce vivid hues on HP’s own Advanced Photo paper.


The four cartridges are the only consumables in this machine and using the higher yield XL versions produces page costs of 3.07p for an ISO black page and 7.71p for ISO colour. While the black page costs are very similar to the other two machines we’ve mentioned, the colour page cost is between 1.5p and 2.0p cheaper, – a worthwhile saving.


For just under £90, including the revised VAT rate of 17.5 per cent, this is a very capable all-in-one. We like the twin paper trays and the machine’s convenience in powering the photo tray. We like the page cost, too and the positive response from the touchscreen. We’re not so keen on the time it sometimes takes for a document to start printing, but the print quality is excellent, so overall it’s a great choice for anybody on a limited budget.