HP’s Vivera inks and scaleable print technology have together improved the print quality and reduced the cost of the company’s ink-jet printers. The Photosmart D7160 is one of the latest beneficiaries and has a couple of other good features as well. Selling at around £80, it’s surprising to see the range of facilities available.


This is a substantial printer, as large as some of HP’s entry-level, all-in-one machines. Coloured in white and two-tone grey, the printer has a fold-up, 61mm LCD display in its top, a series of well laid-out buttons for control of menus and print functions and a set of memory card readers below a curved, flip-up cover on the right.


The paper trays, which project from the front of the machine, offer simultaneous loading of up to 100 sheets of A4 paper and around 20, 10 x 15cm photo blanks. When you choose through software or from the control panel to print photos, the photo tray is automatically drawn into the machine and rolled out again, at the end of the print job. 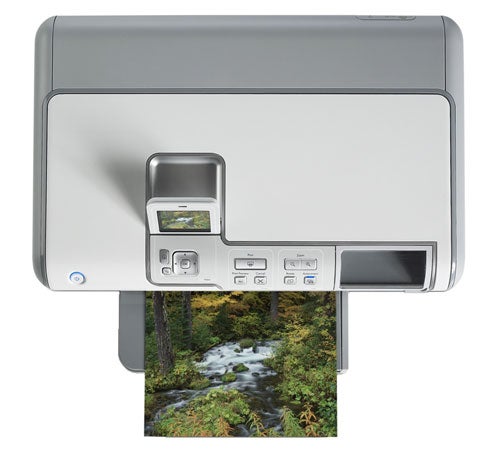 Next to the paper trays at the front is a PictBridge socket for a camera cable and at the rear there’s a single USB socket for PC connection. Setup is very straightforward, using the supplied Vivera ink tanks. There’s a series of six, including light cyan and light magenta and they all plug-in easily and are held in by fold-down yolks.


The software suite bundled with the machine provides a well designed driver, including support for the optional duplex unit, if fitted. However, there appears to be no support for multiple pages per sheet, nor watermark or overlay printing.


Print times from the Photosmart D7100 were a little slow, even for a photo printer. Our five-page text print took 55 seconds, giving a print speed of just under 5.5ppm. This is closer than some printers get to their manufacturers’ quoted speeds; HP quotes 7.8ppm for this machine.

The speed dropped to 3.3ppm when printing colour pages, though a 15 x 10cm print took just under a minute from a PC. The print time increased to two minutes when printing from an SD card or a PictBridge camera however, which is not so impressive. Despite HP’s claim of a 12 second draft print mode, we could find no reference to this in any of the printer’s documentation.


The quality of prints produced by this machine is generally good. Text comes out dense and black, though with some feathering into the paper. Colour block graphics are clean and solid, with good gradations of tone. 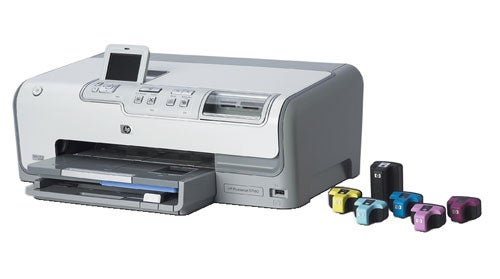 Photo prints at best quality and on HPs Advanced Photo paper were very good, with exceptionally smooth transitions from shade to shade, high levels of detail and natural, well-reproduced colours. Prints on HPs Premium Plus glossy paper were a little grainy, though you have to look closely to see this.


Because of the permanent head arrangement in this printer, it takes more time to service its heads, including during longer print jobs, than earlier machines with cartridge-based heads. It’s reminiscent of Epson printers in this respect. We also saw frequent ‘paper out’ messages, when there was plenty of paper in its tray. Pressing ‘OK’ continued the print, but it meant we couldn’t leave the machine unattended. We assume this was a fault with the specific review sample.


You wouldn’t expect an inkjet printer to produce much noise and while printing the Photosmart D7160 is commendably quiet. When feeding paper though, it peaks at around 60dBA, which is quite obtrusive. If it happens to stop for head maintenance, the pumping noise is also noticeable. 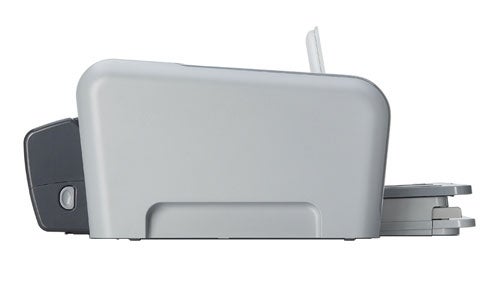 The cheapest way to buy ink for the Photosmart D7160 is in a six-pack, complete with 150 sheets of photo paper, for around £25. If you’re going to be printing a lot of mono pages, there’s a high-yield black cartridge, as well as the standard-yield one, and this works out cheaper per page. However, we managed to get over 1,000, 5 per cent A4 pages from the normal yield cartridge, giving a cost per page of just 1.33p, which is very good for an inkjet printer.


Colour ink cartridge costs give a 30 er cent A4 page cost of 53.7p, which is a lot less attractive. However, this is on A4 photo paper and an equivalent print on a 15 x 10cm blank would be a lot cheaper.


All the right design elements can be found in the Photosmart D7160, but some shortcomings, such as print feathering, possible paper mishandling and noise when feeding sheets detract from what would otherwise be an excellent machine.