It’s been tried before, most notably by Kodak, but the concept of a camera which docks with a matching printer remains a good idea. This HP bundle is aimed at those thinking of switching from a conventional camera and buying their first digital setup. Its two big advantages are that it’s very easy to get prints from your camera and that it costs under £150.


HP uses the marketing line ‘No cables, No worries’, though there are actually several cables supplied in the box – it’s just that you don’t have to use them. The basic design of the bundle is one of HP’s small photo printers, with a camera dock set into its top surface. Plug the camera backwards into the dock and you can use its LCD display as a monitor, while you’re selecting the shots to print. 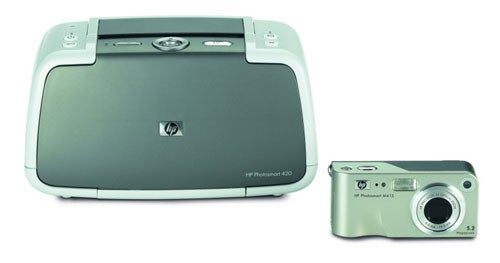 The supplied cables connect the printer to a PC, so you can print images, and to a TV, so you can run slide shows of the pictures on your camera. There’s also a cable from the external power supply, built into an oversized mains plug.


The printer itself is similar to many others in the Photosmart range. It uses a single, tri-colour cartridge that slots in through a hatch on the right-hand side, or a tri-grey cartridge for printing black and white. Up to 20 sheets of 15 x 10cm photo paper can be loaded in the feed tray at the back and they feed out onto the folded-down front cover.


On the top surface, there’s a menu control ring, which echoes the one on the back of the camera, surrounded by other assorted buttons, for power, picture zoom, print and TV output. A rechargeable battery pack fits under a hatch in the bottom of the printer so it can print away from the mains. 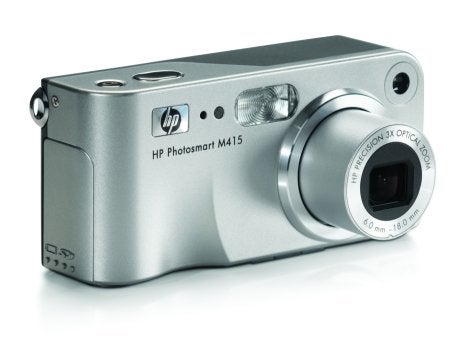 The bundled Photosmart M415 camera, which has a surprisingly good spec, is a bit shorter and fatter than normal. It has a 5Mpixel sensor, 3x optical zoom, with 6x digital zoom on top, 16MB of internal memory and an SD/MM card slot for adding more. As supplied, it can take eight shots at its default resolution.


The lens system is termed ‘HP high precision’, which tells you little, but in use it produced reasonable shots, up to the holiday snap standard many casual photographers will want. It includes innovations such as in-camera red-eye removal and HP adaptive lighting, which is claimed to improve shadow detail in shots with a wide dynamic range. Weaknesses are the auto-focus, particularly in macro mode, and its small, 38mm LCD.

Physical set up is pretty simple, even though you’re configuring two pieces of kit.

The camera just needs its twin AA NiMH batteries slotted in and you can then charge it up by plugging it into the cradle on top of the printer. The printer itself needs its own battery, an ink cartridge and some paper stacked in the feed tray at the back.


It’s unusual to find a printer which prints faster than the claims made by its manufacturer. The Photosmart 422 does. We produced a print from the camera in 1:56, slightly less then the two minutes quoted and one from a PC in 1:44. Good times, though still slower than from an equivalent Epson photo printer. 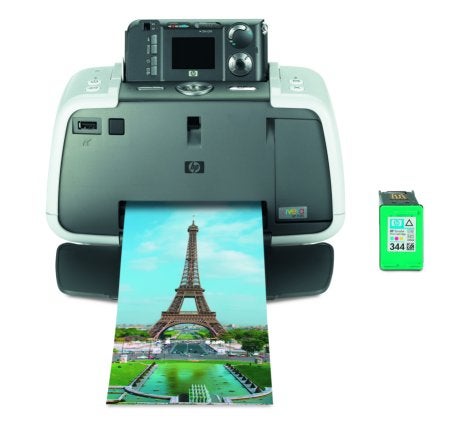 Print quality is variable. We know printers in the Photosmart 4xx range can produce very high quality output and we saw this from our PC-generated prints. When we printed straight from the M415 camera, though, we saw micro-banding and noticeable noise, even in prints with no digital zoom applied.


The Photosmart printer can use either the 343 or 344 colour cartridges, both tri-colour but with different ink capacities. The 100, tri-grey cartridge can also be used, though for some reason HP quotes half the number of prints of the high-capacity colour cartridge, odd when the 100 holds more ink.


Costs come out at 22p for a colour print and 30p for a black and white. The colour cost is good, but we see little reason for the black and white to cost more. These prices use cartridges from 7dayshop.com, which claims to charge no VAT. We’re not sure how HM Customs and Excise will view this.


This could have been one of the bargains of the year in entry-level digital photography, if only print quality from the camera were better. As it is, the camera is hard to focus and printed output is often grainy.