It’s no secret that laptops are making a fair attempt at killing off our poor old desktops, and despite being heavily involved in both markets, as the world leader in notebook computing HP has done more than most to bring this about. One of HP’s latest soldiers in this battle is the Pavilion dv6750ea, which HP goes so far as to call an Entertainment PC, rather than a notebook. But is it mere cannon-fodder, or another nail in the desktop’s coffin?


The Pavilion dv6750ea certainly makes a noticeable effort in terms of looks. In a bid to stand out from the crowd and give its laptops something unique, the Pavilion range is finished in a very distinctive pattern HP calls Imprint. To add an extra ‘personal’ touch, this particular iteration sees ‘fingerprint’ patterns swirling and coiling around the chassis, and even extends them to your desktop wallpaper. 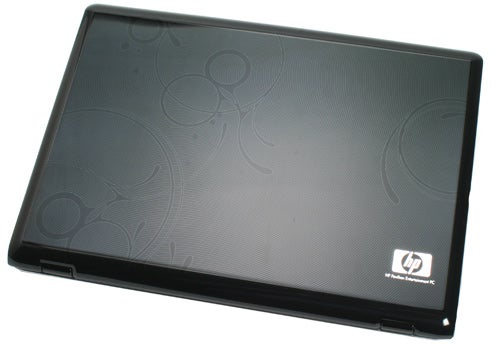 On the lid this design is set against a glossy black finish, while the inside (at least below the keyboard) is silver with white patterning. Thankfully the screen’s bezel is a plain – albeit very shiny – black, somewhat minimizing its distraction value. Overall, while I favour the understated looks of the Samsung R60+, that’s a personal preference, and the dv6750ea does look like it costs more – maybe because it actually does.


The only real disadvantage to the mirror-finish lid is that, after a while, it’ll be hard to distinguish the imprint design from your own fingerprints. However, this is hardly unique to HP’s machines, and is nothing a soft lint-free cloth can’t handle. The silver bezel around the black matte keyboard, meanwhile, is more forgiving of grubby mitts, and will only show prints other than HP’s at certain angles. 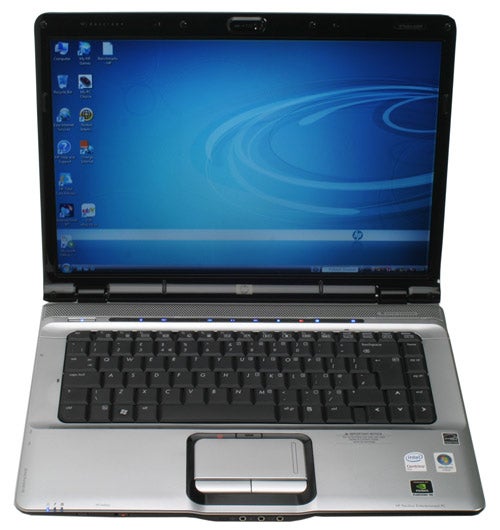 Perhaps the first thing one really notices about the dv6750ea, other than its imprint, is that it’s curvy, even extending to rounded keys at the edges of the keyboard. The keyboard and touchpad are both recessed into curved hollows, which actually makes typing more comfortable, as your palms are resting just slightly higher than the keyboard.


The lid has no clips, instead using a resistant hinge to keep it closed. Quite apart from clips being another thing that can break, this system is strong enough to prevent your laptop opening inadvertently and makes it far easier to open when needed. 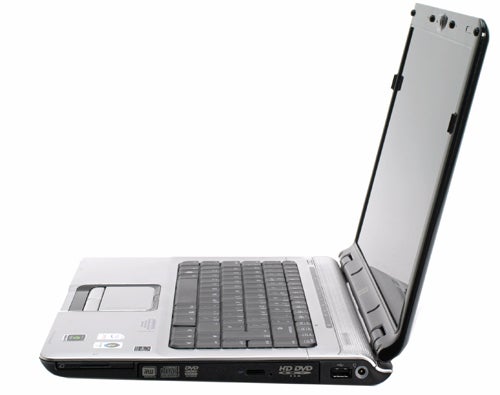 In terms of design then, the dv6750ea’s a winner, although it only comes with a single finish: if you want diversity you might be better off going for the Dell Inspiron 1525. In terms of build quality, however, it isn’t the sturdiest. Don’t get me wrong, it’s by no means flimsy, but road warriors might want to look elsewhere – also because at 3.10kg it’s just a tad heavy for its size.

HP has chosen to site the power connector on the right side of the laptop. While this is a little awkward for people who have become used to a rear location, it leaves the back free, with the front used for audio ports and the wireless switch. Speaking of ports, the dv6750ea is resplendent with them. Not only do you get three fairly well-spaced USBs, but an SD/MSPro/MMC/xD memory card reader, ExpressCard slot and more unusually a selection of VGA, S-video and HDMI ports are all present and accounted for.

HP’s curvy portable even offers an expansion port for an HP docking station and mini-FireWire, and surprisingly – in a good way – two audio-out 3.5mm headphone jacks, so you and your pal/partner/pet can listen to movies and music together without disturbing anyone. It’s one of those small touches that elevates the dv6750ea above the crowd. The only other connection you could possibly wish for is eSATA, though this is more of a desire than an expectation.


Other unusual touches include little icons that show where most ports are located without having to look around the sides – hardly revolutionary but welcome nonetheless. Blue backlit touch-sensitive media controls set just above the keyboard are beautiful and responsive and though some may still prefer physical buttons, this is one of the better implementations. 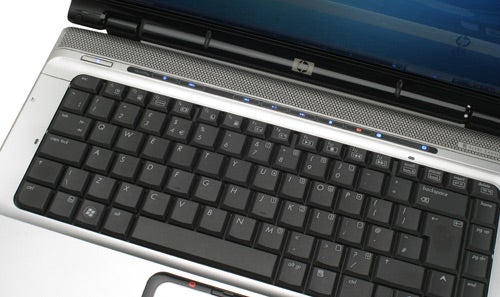 Much like the rest of the dv6750ea so far, the keyboard is rather good for the money. Layout is fairly standard, and – unlike some – HP puts its Fn-key on the inside of the Ctrl-key. Response is a bit of a mixed bag; the keys are a tad noisy, but overall feedback is good – certainly no-one in the office disliked it.


A feature that’s often seen on HP laptops is a little button set just above the touchpad that acts as a hardware on/off switch. This is another one of those little things you’d wish every manufacturer would include, and I would have liked to have praised HP for it – but after using the dv6750ea for a while I can’t. Unfortunately, rather than being a feature, this switch is a necessity. Thanks to the location and width of the touchpad, it is ideally positioned for your palms to interfere with your typing, randomly moving the cursor in the middle of writing a sentence. This is simply bad design, and quite disappointing after all the dv6750ea’s highpoints.

But let’s see if HP’s laptop can regain our respect and live up to its ‘Entertainment PC’ credentials. Starting off with audio, the dv6750ea features one of the more imposing speaker grilles I’ve seen on a laptop. Altec Lansing, though not a particularly premium name in audio, is responsible for this stereo effort – and while the sound quality is actually not as impressive as looks suggest, this is definitely one of the better budget efforts. Bass has all the impact of a fruit-fly splatting a windshield, and treble can occasionally degenerate into cat-strangulation; but the speakers offer some decent volume, excellent separation in the mid-range, and a truly surprising sense of depth. Honestly, it’s more than you might expect at this price point.


Meanwhile, the 15.4in, 1,280 x 800 display features the usual glossy coating, which is always something of a mixed blessing. Suffice to say that the coating can have a very positive impact on the vibrancy of colours and may improve contrast, but makes viewing in environments with ambient light difficult, while often causing you to see reflections of what’s behind you.

As glossy screens go, however, this specimen is rather good. While poor viewing angles do cause some radical colour-shift when viewed from above, there is hardly any backlight bleed and light-distribution is consistent. Colours are exceptionally vivid, and once you turn the brightness down a bit blacks are deep, though – as usual in laptop screens – at the cost of some dark detail. As long as you can avoid strong ambient light sources, the dv6750ea is a pleasure to watch movies on, with above average audio and visual quality.

Thanks to its GeForce 8400M GS, this Pavilion offers PureVideo HD decoding, which takes a load off the modest Core 2 Duo T5450 1.66GHz processor when playing videos using software that supports it. The GeForce chip should also allow you to play the occasional game, scoring a 33.7 average at medium quality settings in Trackmania Nations Forever. For anyone who doesn’t know either the game or the 8400M GS, a word of caution: a gaming powerhouse this is not, but you should be able to run older games at the native resolution.


Considering this is a budget laptop, the above average graphics card does result in a slightly smaller hard drive than we would have liked. But to be fair, 160GB should be plenty for the average user, and external drives are cheap and plentiful. There doesn’t seem to be any other noticeable evidence of cost-cutting, and Windows Vista Premium zips happily along on the provided 2GB of RAM.

Battery life is good, consistently beating Samsung’s R60+ despite featuring discrete graphics. The only surprise was that it got beaten by Samsung’s 17in R700 in DVD playback, but then the R700 did unusually well in our power tests and in other tests the HP does have a slight advantage.

Other features of note include the webcam and microphone integrated above the screen, and the DVD-writer’s LightScribe technology, which allows you to burn text and images onto compatible discs using the drive’s laser. We also rather like the included remote control, which when not in use tucks neatly away into the ExpressCard slot. 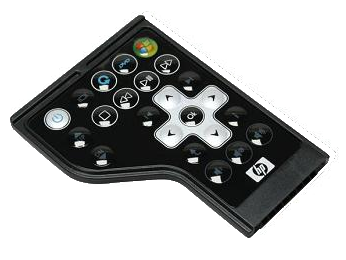 Before wrapping up, it is worth mentioning HP’s custom software, specifically the HP Total Care Advisor (TCA) and the ironically named QuickPlay (it’s not particularly quick), HP’s equivalent of Windows Media Player. TCA opens up a beautifully presented window that combines PC health and security with printer and Internet management, remaining battery life, backup options and remaining disk space on all hard drives. While experienced users might find it unnecessary, they’ll know how to get rid of it. For the less computer savvy, it’s another nice touch by HP. Likewise Quickplay, despite looking attractive, is slow, supports a bare minimum of formats, and will only appeal to the true computer novice. 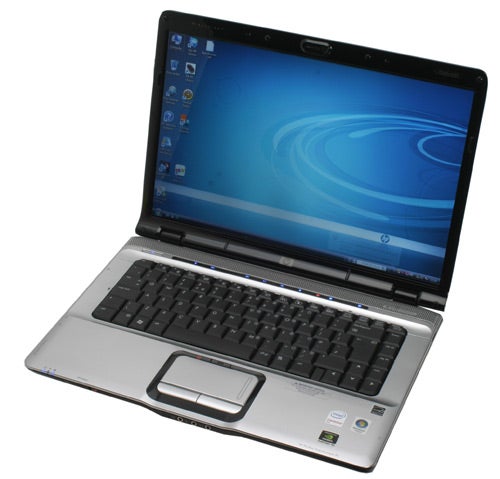 Lastly, when buying the dv6750ea, just keep in mind that an extra tenner will get you two extra inches of screen and 90 more gigabytes of hard drive space in the R700. On the other hand, 17in is a different class of notebook, and the dv6750ea offers more perks like the included remote.


Despite facing strong competition from the likes of the Dell Inspiron 1525, HP is giving you a lot for your hard-earned pounds with the Pavilion dv6750ea. The curvaceous and unique design might not appeal to everyone, but those to whom it does will have something to show off with pride. Its beauty isn’t just skin-deep either, with the Geforce 8400M letting you play modest games and dealing well with video for the bright screen, while a large range of inputs makes it quite versatile. 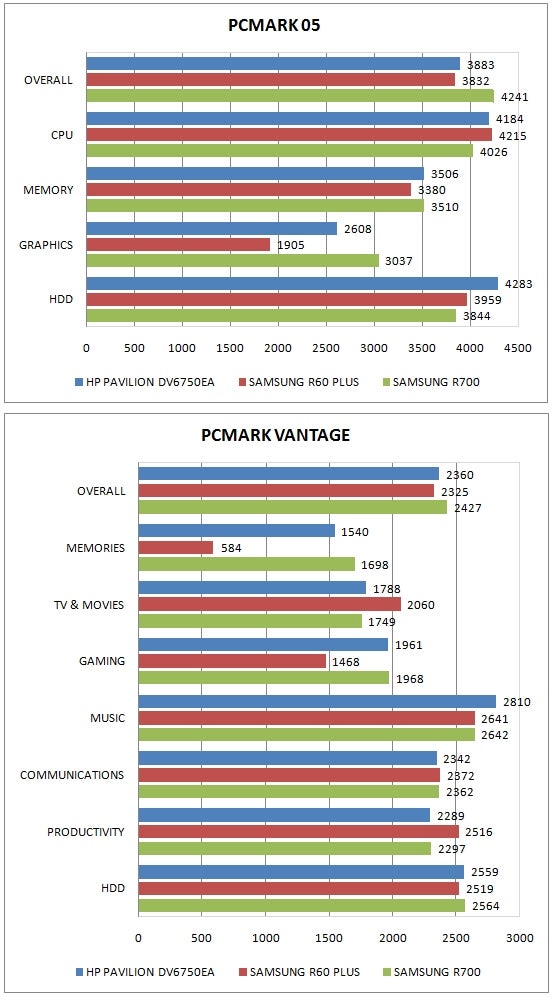 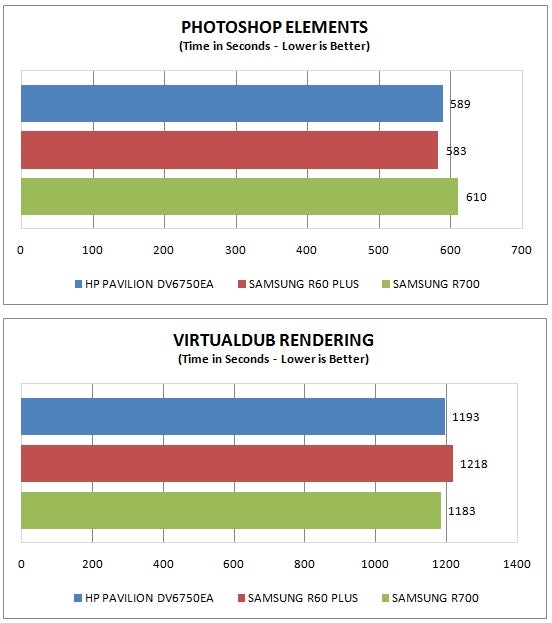 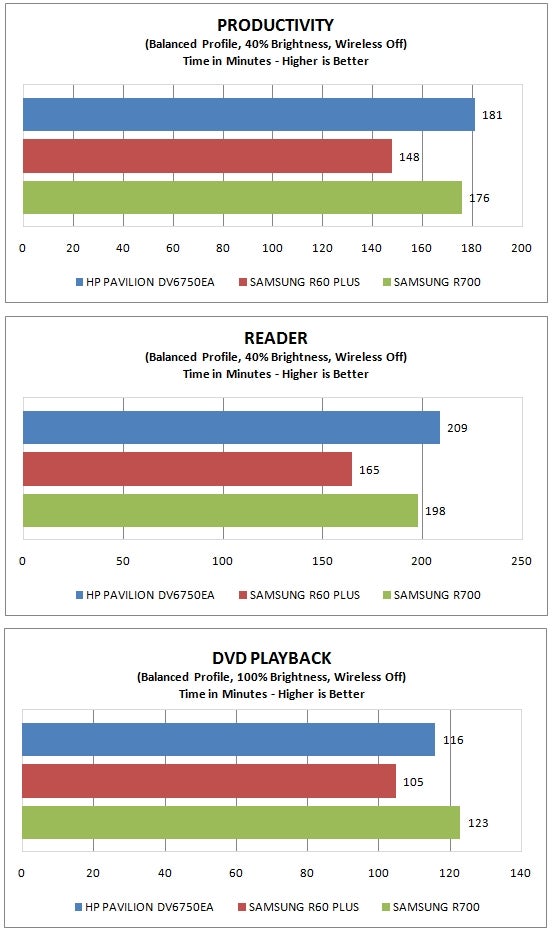