This is the third time we’ve reviewed the HP Pavilion dv6. This might seem excessive, but laptops evolve quickly as new technology becomes available and the HP Pavilion dv6-2113sa is one of the latest configurations now on sale. At £550 it’s very keenly priced too, but this is a competitive part of the market with the likes of the Samsung R580 going for a similar price. It’ll have to do a lot to impress.


That competitive price can be partly explained by the processor, an AMD Turion II Ultra M620. This dual-core processor, which runs at 2.5GHz and has a 2MB Cache, will be cheaper for HP than the alternative Intel option. We assume this saving has been passed on to customers, but even if it hasn’t the dv6-2113sa represents extremely good value for money.


Glancing at the rest of the specs tells us this much. For your hard-earned cash you get a 500GB hard drive (a 7,200rpm one no less), 4GB of DDR2 RAM and a 64-bit version of Windows 7 Home Premium. Graphics is supplied by an ATI Mobility Radeon HD 4530 with 512MB dedicated memory, while the obligatory DVD drive offers up LightScribe support. Wireless-N Wi-Fi, Bluetooth 2.1+ EDR and Gigabit Ethernet complete the near faultless spec. 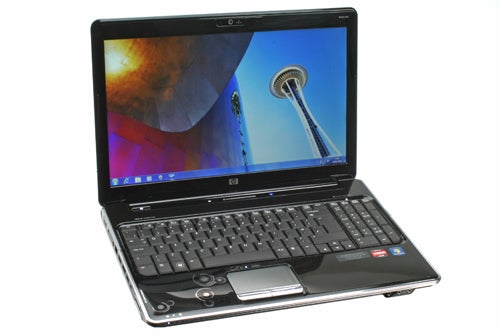 This excellent internal specification is matched by the external connectivity, which is diverse and well-considered. HDMI and VGA are present, as is a proprietary port for use with one of HP’s docking stations. HP is unique (to our knowledge) in support for docking stations on consumer laptops. These are joined by three USB ports (one with eSATA support), mini-FireWire, 54mm ExpressCard, and a memory card reader. A trio of audio jacks (2x headphone, 1x microphone) are joined on the front edge by an infrared receiver. HP even includes a compact remote that slots into the ExpressCard slot. It’s an incredibly generous collection at this price.


Neither has HP skimped on the design or materials used to make the dv6-2113sa. Admittedly those with an aversion to glossy plastic will want to avoid it, but the dv6 is a very good looking machine. Its combination of gloss black finish, infused with HP’s fun signature imprint designs, and faux chrome edging works very well. It’s coherent, measured and stylish without looking overly fussy or cluttered. 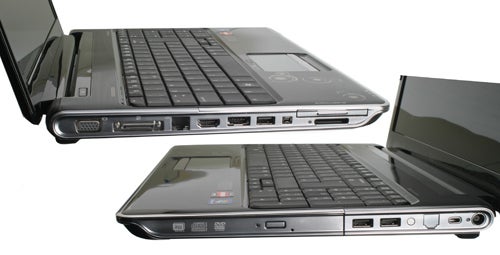 While it’s always difficult to gauge build quality on a new product – it takes long term usage to get a full picture – our initial impressions are positive. HP has used decent quality plastics throughout and the large, chunky hinge inspires confidence. Only the slightly unsightly joins near the Tab and Caps Lock keys (mirrored on the opposite side) where different parts of the trim meet are cause for complaint, but it’s mostly a cosmetic issue.

Our confidence in the build quality of the dv6 is reinforced by the keyboard. In stark contrast to the somewhat light and flimsy one on the Dell Inspiron 1764 we reviewed recently, the keyboard on the dv6 feels firm and planted. Keys have smooth, consistent actions that don’t rattle or crunch, while the layout is excellent and features a useful numeric keypad. 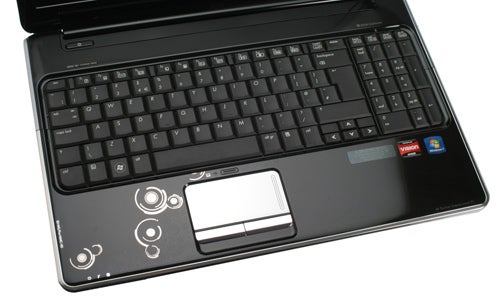 There are some other neat touches, too. We like how the Caps Lock and Num Lock keys have small white LED indicators near them, which is far more useful and intuitive than clustering them elsewhere on the chassis. We also like the inclusion of a touch-sensitive volume slider and mute button, not to mention the wireless radio toggle button as well. For such a cheap machine there’s a great deal of attention to detail here.


Such excellence is matched by the touchpad. HP seems to have rectified a mistake of old by not using an overly sticky or reflective surface, instead opting for a matt finished surface that retains a nice smooth feel. It’s matched by two good, individually hinged (no annoying rocker switches here) buttons that offer crisp, uniform feedback. It’s worth noting there’s no multi-touch support here, but we’ve yet to see a Windows PC that’s put it to as good use as the Apple MacBook Pro so it’s no great loss. 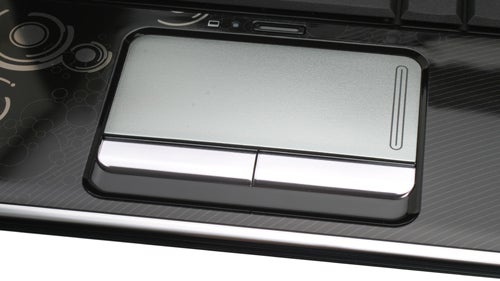 If the dv6 drops its standards at all it’s in the audio-visual department, but it’s only to levels similar to all its peers. Its 15.6in screen, for instance, exhibits all the usual pitfalls, such as indifferent viewing angles and a glossy finish that invites reflections, which befall most consumer laptops.


Despite these issues, however, the 15.6in (1,366 x 768 pixel) screen is still comfortably in the top-half of the table where quality is concerned. It produces balanced yet punchy colours and maintains a good black-level, both of which result in a good viewing experience for video content. It does struggle a little more than some in producing subtle grey shades, but in reality it’s a barely perceptible difference. 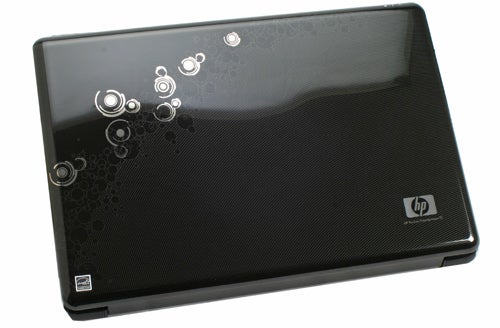 It’s a similar story for the speakers. They’re good enough, offering top-end clarity and a healthy volume. However, while they’re superior to the speakers on the Samsung R580, they lack mid-range warmth and low-down bass definition. Don’t be deceived by the Altec Lansing and SRS Premium Sound branding – audio from the dv6-2113sa is competent but nothing outstanding.

As we started testing the dv6-2113sa we were actually really interested to see how it compared to the Samsung R580 and its Intel Core i3. It’s rare that we get to directly compare AMD and Intel based laptops, especially in two laptops that are so similarly priced and specified.

Our results were encouraging. While the HP does have the advantage of a 64-bit OS, it’s good to see it keeping pace with the Core i3 powered Samsung. It’s only marginally slower overall and it actually outperforms the R580 in some tests where the 64-bit OS helps out – you can see this in the full results page at the end of the review. Note also that it comfortably bests last year’s Intel-based dv6, the HP Pavilion dv6-1240ea.


Even more impressive was our subjective experience of the performance, where the fast 7,200rpm clearly has a beneficial impact on system responsiveness. Most of what you do with a PC is loading applications, rather than performing CPU intensive tasks, so getting in and out of applications quickly has a massive impact on perceived performance.

In gaming, meanwhile, the HP is beaten by the Samsung by around 10fps in Trackmania Nations, but its 41.7fps is still a solid, playable rate. This makes it more than good enough for less demanding casual games and older titles, though the 13.2fps in STALKER shows more advanced titles are beyond it.


Clearly AMD hasn’t solved all of its weaknesses where mobile computing is concerned, though, as the results from MobileMark 2007 show. In the Productivity benchmark the dv6 (2hrs, 37mins) lasted nearly an hour less than the Samsung R580 (3hrs, 31mins). There’s little difference in the DVD test, however, which shows AMD’s problem (a long standing one) is its efficiency in low-power, near idle states.

Despite these caveats, in a large laptop that weighs 2.94kg, relatively average battery life is a far smaller concern than it might be on a more portable laptop. As such it’s not a reason to avoid the dv6-2113sa, particularly as in every other respect it’s an outstanding laptop.


It’s almost ridiculous how much you can get for your money. As all-round laptops go, the HP Pavilion dv6-2113sa is among the best we’ve seen. It has more features than a £550 laptop has any right to, sports a refined and well-made chassis and performs admirably. A Recommended Award is the least it deserves. 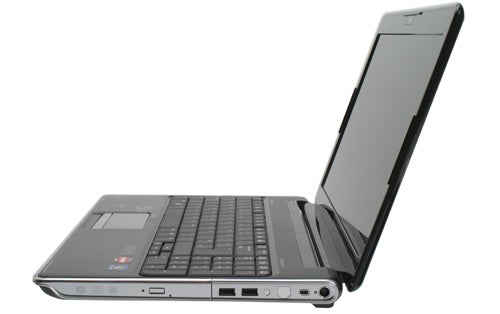 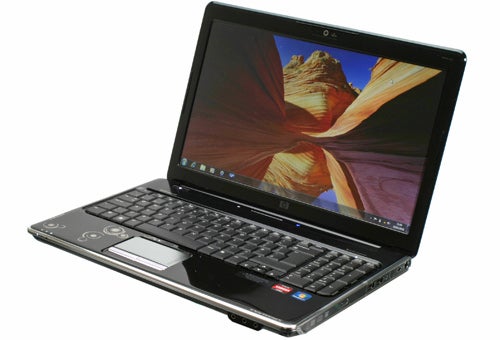 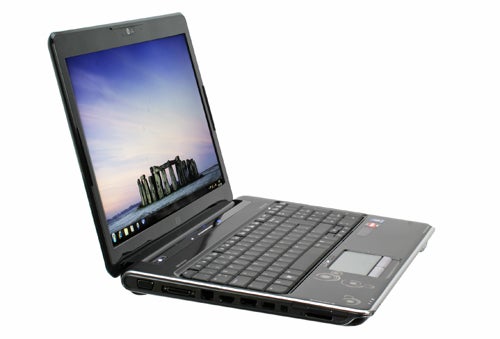 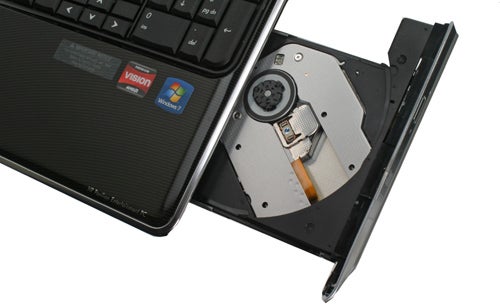