Based on a 16:9 aspect, 15.6in display, the HP Pavilion dv6 range is the latest addition to HP’s mainstream laptop lineup. There’s plenty of competition in this particular sector, since 15.6in is essentially the new 15.4in – i.e. the mainstream laptop size. Just recently we’ve reviewed the Sony VAIO VGN-NW11S/S and the Dell Studio 1555, both of which have impressed, so the dv6-1240ea we’re looking at today has its work cut out. 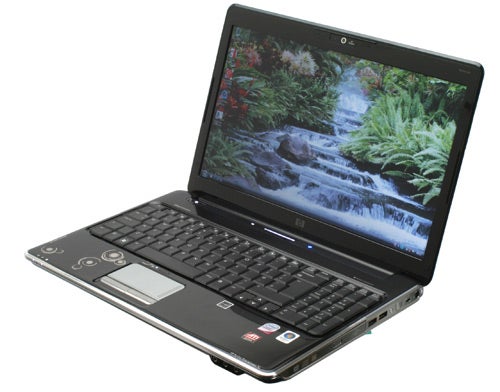 Having praised Sony’s recent effort for its lack of glossiness, the HP is very much at the other end of the spectrum. We can be thankful that at least the keyboard sports a non-marking, matte finish, but every other surface is finished in a glossy sheen that attracts dust and fingerprints with abandon. Even the touchpad, which has a mirror-like ‘liquid metal’ appearance, is glossy, though it is at least very smooth. Its two buttons are individually hinged too, so provide crisp and audible feedback.


Still, if you can see beyond the glossiness of it all, the dv6 makes an arresting first impression. Its dark brown ‘Espresso’ finish, imprint designs and the backlit HP logo on the lid give it an individual edge and contrast nicely with the silver of the touchpad and trim. Those who prefer their technology a little more discreet might find it all a bit too much, but even if it won’t appeal to all tastes this is still a well designed laptop. 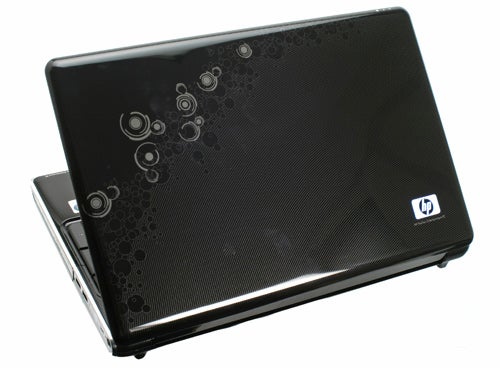 This goes for its ergonomics, too, which are particularly strong. Unlike either the Dell or the Sony, the HP squeezes in a very useful number pad alongside the keyboard, while the audio connections are moved to the front-right for easy access. Also at the front is an infrared receiver for the provided remote, which can be stowed in the ExpressCard slot. This is a great feature for any laptop, since it makes using it as a multimedia machine – playing music through your Hi-Fi or watching a film – that bit more attractive.

To further this end there are touch controls above the keyboard comprising a mute button, a volume slider and wireless radio toggle – playback controls can be found on the top row of the keyboard. As for the keyboard itself, it’s pretty good. We encountered no problems with the layout, while the aforementioned number pad is invaluable. Were one nit-picking the key action is a little on the soft side, but keys still provide ample feedback and there’s no alarming flex to worry about.

While we were a little disappointed by some aspects of the Sony VAIO NW11’s connectivity, no such complaints can be made of the dv6. You get four USB ports in total (more than the usual three), with one doubling as an eSATA port. There are the obligatory HDMI and VGA video ports, while the trio of front-mounted audio jacks (1x line-in, 2x headphone) provide ample audio options.

Also included is mini-FireWire, a 54mm ExpressCard slot, a 5-in-1 memory card reader and a propriety connector for one of HP’s docking stations. HP is unusual in offering the latter in its consumer laptops, but it’s a useful thing to have if you like to connect separate keyboards, mice and monitors as part of a desktop.

So far the dv6-1240ea already has an impressive set of features, but the hardware specification only improves on things. Conducting proceedings is the 2.1GHz Intel Core 2 Duo T6500 processor, with 4GB of DDR2 RAM and a 512MB ATI Mobility Radeon HD 4530 in support. Particularly impressive is the capacious 500GB hard drive, which, given the rest of the components on offer, means the dv6-1240 offers a truly outstanding level of refinement for the money.


You can add to this excellent network connectivity, with Gigabit Ethernet and Draft-N Wi-Fi both supplied. You also get Bluetooth, while the 8x DVD Re-Writer drive adds LightScribe label burning to the already bulging list of features. Only the likes of a Blu-ray drive or higher resolution display could really improve upon these basics, but you couldn’t reasonably expect such luxuries in a £700 laptop.

Even without a Full HD resolution, the display on the dv6 is a very good. It exhibits all the weaknesses common to most laptop displays, viewing angles aren’t very wide and it can’t display as many colours as a dedicated monitor, but its colour production is rich and its blacks above the average laptop’s depth. And, while it isn’t 1080p, the 1,366 x 768 resolution is the standard these days and offers enough real-estate to sit two documents side-by-side. A glossy finish means bright sunlight can be an issue, but this is true of 99 per cent of laptops in its class. 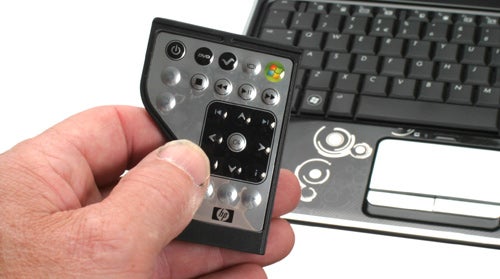 Audio performance brings even more cause for cheer. While the dv6 doesn’t quite match the Dell Studio 1555 due to the lack of a mid-range woofer, the Altec Lansing stereo speakers (boosted by SRS processing) deliver a competent performance – certainly better than the Sony VAIO NW Series. Music is delivered with a modicum of punch, reasonable clarity and little discernable distortion even at high volumes. Really frenetic action scenes are probably beyond their capabilities, but anything else can be tolerably enjoyed.

In performance terms one wouldn’t characterise the dv6-1240ea as rapid, but it more than holds its own. In PCMark Vantage it produces similar results to both the Sony NW11S/S and Dell Studio 1555 Midnight Blue, both of whom share the same processor and roughly similar specifications. Those similarities include the lack of a 64-bit OS, despite the 4GB of RAM begging for such an inclusion. 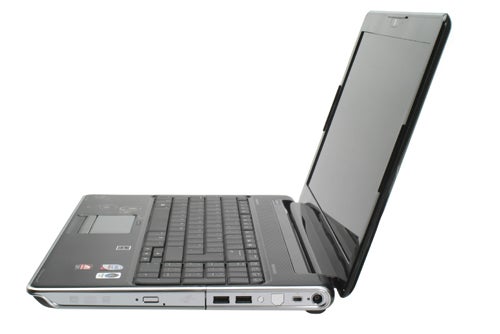 All the same performance is good, making this a solid all-rounder for anyone indulging in the usual productivity and multimedia activities. Only very CPU intensive tasks, such as HD video editing and encoding will really challenge it, but even then it should cope well enough for occasional duties.


This goes for games, too, which can be enjoyed at moderate settings provided they aren’t overly taxing. We managed to add 4x anti-aliasing to our usual Trackmania Nations benchmark (at medium detail) and still get a very smooth 41.1fps, just a few frames per second slower than the Sony NW11 and its mobile ATI HD 4570 at the same settings. This should be more than enough to run the likes of The Sims, World of Warcraft and Spore, though more recent FPS titles will require further compromise.

In spite of this largely faultless performance, the dv6 does at least have one weakness: battery life. Where the Sony NW11 produced an impressive four hours in MobileMark 2007’s Productivity benchmark, we got just two hours and 47 minutes from the HP’s 47 Watt-hour capacity battery – a difference of around 30 per cent. This trend is replicated in all tests, so the HP isn’t the best option if wanting to pop out of the house once in a while.


In all fairness, however, it’s not the kind of laptop you’d want to go out with anyway. It weighs a hefty 2.8kg, 200 grams more than either the Dell or the Sony, while the physical size doesn’t lend itself well to mobile use. As such, the dv6 is bound to spend most of its time indoors (true of most laptops, even netbooks), in which case its battery life should suffice even if it doesn’t inspire. 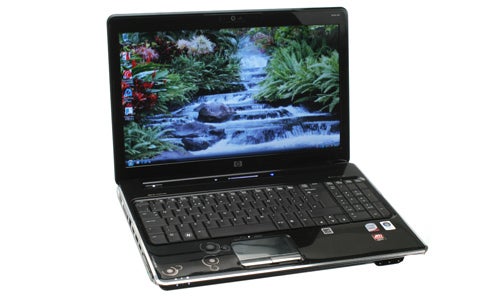 
Mediocre battery life aside, the HP Pavilion dv6-1240ea is an exceedingly accomplished laptop. Its specification is perfectly balanced and the list of features and extras (like the included remote) it offers for the money is truly astounding. If you’re after a laptop that can do a bit of everything and don’t want to spend the earth, we can think of little better suited to the task.

The HP compares favourably to both the Sony VAIO NW and the Dell Studio 1555, outperforming them overall despite using the same processor. Gaming peformance is also pretty good, so it strikes a nice balance between performance and value.

While its raw performance is very good, the HP’s battery life is less impressive – two and three quarter hours in the Productivity segment is okay for occasional use, but not much else.

In the lower intensity Reader test, the HP lasts an hour and forty minutes less than the Sony.

You won’t be enjoying too many films wihout a mains adapter close by.