HP is trying to persuade everybody that a good solid office inkjet printer is a better bet than a flimsy little colour laser. Its latest offering is the Officejet Pro 8500 Wireless, which is a big, robust machine, but with some of the downsides of a laser as well as the upsides of an inkjet.


The machine has a big footprint, particularly when you take in the duplexer sticking out the back, the separate, black block power supply off which it runs, and the extending paper tray at the front, which is rarely pictured open. 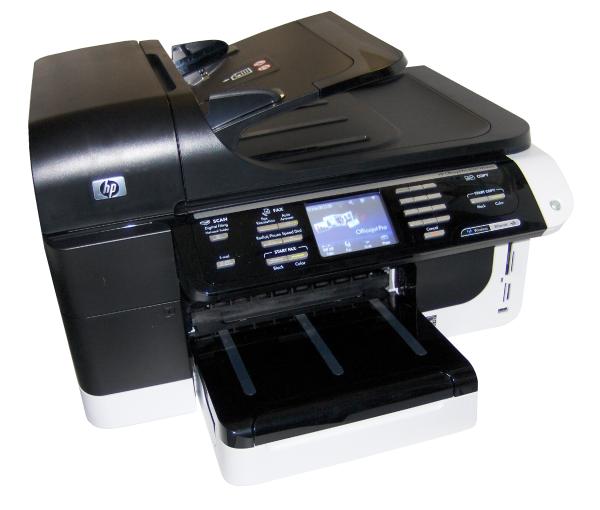 A 50-sheet automatic document feeder projects from the top in all its glossy black glory and projecting from the front, there’s a glossy black control panel, too. This is well laid out, with a large, 87.6mm touchscreen centre stage. To the left are fax buttons, for things like auto-answer and fax resolution, while to the right is a number pad for dialling and buttons to start black and colour copies.


The flatbed scanner is a slightly awkward design, as the head rests normally close to the ADF feed at the left-hand end of the glass, while a single page scan is read from the right-hand end, so the head has to travel the full distance of the flatbed before starting a scan.


The single paper tray, positioned below the control panel, can take 250 sheets of plain paper and an optional second tray can be fitted below the machine. There’s no secondary feed for photo blanks, so if and when you need to print photos you have to remove the plain paper from the A4 tray and readjust the guides for the smaller paper size.


To the right of the paper feed tray is a set of four memory card slots, which take all the standard types and there’s a PictBridge socket for camera connection. To the left of the tray, a pull-down cover reveals the four individual ink tanks which take HP’s new pigmented inks. These should provide increased water resistance, while at the same time producing bright, vivid colours. 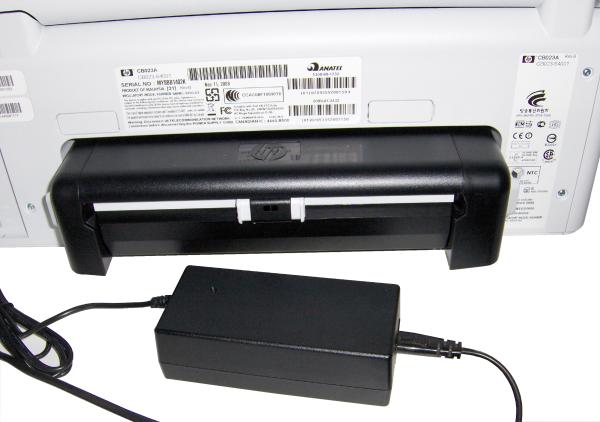 You have to hinge the scanner section up to fit the two, twin-colour heads into the head carrier and the machine then performs a 15-minute charging cycle to suck the ink from cartridges to heads.


Connection between printer and PC can be made by USB connection or by Wi-Fi link, though oddly there’s no cabled network socket. Wi-Fi setup is a two-stage procedure, where you get the Officejet Pro 8500 Wireless to search out your network, and enter your security key, before getting the installation software to install the network drivers from the PC end.


Although bright and easy to read, the touchscreen proved disappointing, as we experienced several misreadings of touch buttons and often had to press more than once to get a reaction.

As if to emphasise the possibility of replacing a colour laser printer with this machine, HP quotes speeds of 35ppm for black print and 34ppm for colour. In fact, we saw a maximum speed of 12.8ppm, printing our 20-page black text document. Printing the black text and colour graphics document produced a speed of 5.8ppm.


This doesn’t compare particularly well with colour laser printers at similar price points. For example, the recently tested Lexmark C543dn, costing around £250 (printer, not multifunction), can manage over 16ppm in black and 10ppm in colour.


When we used the duplexer on the Officejet Pro, to produce double-sided documents, the speed dropped further, to around 3.3spm, due to an 11 second drying time, inserted between the printing of each side, because of the pigmented inks. This is slow enough that duplexing will probably get little use – what a shame. Printing photos, while not the main task of an office inkjet like this, was also comparatively slow, with an average time of around 1:40 for a 15 x 10cm print. 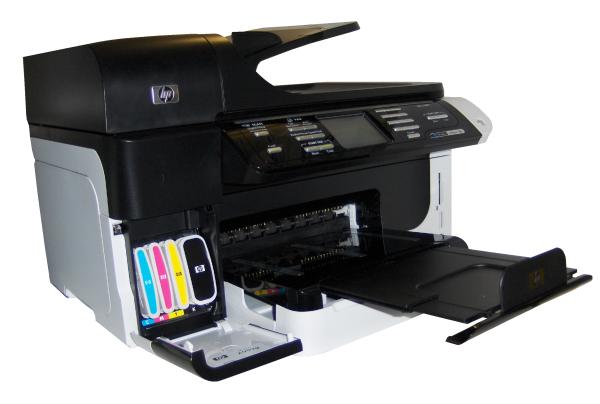 Print quality from the new inks is generally good, though slight feathering is visible around emboldened characters in cross heads, etc. Colours in business graphics, as you might expect from the larger, pigmented particle size, are bright and vivid, just as you want them. Registration of black text over colour is also good and a test colour photocopy showed less fading than many.


Photo prints also come out pretty well, certainly much better than from any colour laser we’ve seen, though some detail is lost from shadowed areas of images.


HP claims half the running costs of a typical colour laser for this machine. The ink cartridges are available in two capacities and using the XL Value consumables produces costs of 1.91p for black and 5.54p for colour. Again, comparing with the Lexmark colour laser, HP has a point. The C543dn costs 3.16p for black and 12.00p for colour, so considerable savings are available from the Officejet Pro.


If you need even the occasional photo print in your business, the Officejet Pro 8500 Wireless is a better bet than a typical colour laser multifunction at the same price. It’s cheap to run, though, despite what HP says, a lot slower too, particularly when printing duplex pages. It’s also pretty noisy, with the company admitting to noise levels of 62dBA, with which we wouldn’t argue. That could out-din many an office laser.