Don’t confuse the OfficeJet Pro 8500, HP’s big, heavy-duty office inkjet all-in-one which we reviewed a few weeks back, with its OfficeJet Pro 8000, which is a big, heavy-duty office inkjet printer. Although it uses the same engine, it’s a third of the price and is intended as an alternative to the current tranche of cheap colour lasers aimed at home and small offices.


With large-radius curves breaking up an otherwise boxy look, the OfficeJet Pro 8500 shares the modern black and white styling of its bigger counterparts. Its single paper tray extends from the front of the machine and paper makes a 180-degree turn during printing and exits out onto the tray’s lid, once you’ve extended a long paper support. 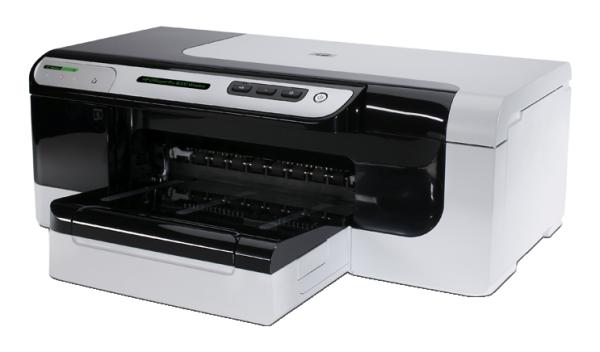 The control panel is about as simple as it can be, with four indicators for the ink status of the cartridges and four buttons for networking, job cancel, paper feed and power. At the back is a plug-in duplexer, supplied as standard, and sockets for USB and Ethernet connections, as well as HP’s usual external power supply. Supplying a black block PSU is no doubt an advantage for HP, but just adds to the clutter under a customer’s desk.


Our review printer was supplied with partly-used ink tanks and print heads and unusually, these had all been removed from the printer before dispatch. We were expecting to have problems with the ink system due to air bubbles, but were pleasantly surprised that once all the consumables were plugged back in place, the printer did a quick recharge and printed flawlessly throughout all our tests. 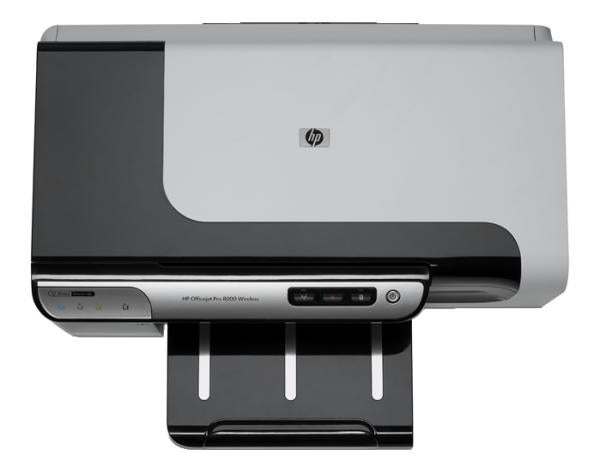 HP’s ink system uses separate, high-yield ink tanks and each print head deals with two of the four ink colours: there’s one for black and yellow and one for cyan and magenta. The high-yield ink tanks slot in at the front and offer capacities of 2,200 black pages and 1,400 colour, close to the capacities of typical colour lasers in the same market. Unfortunately, also like many colour lasers, this machine is supplied with ‘introductory’ cartridges, with capacities of around half these figures.


Because it’s a single-function printer, the software is comparatively simple, with just an Internet print utility and the driver. Both install easily and the driver is reasonably well-specified, with facilities to print multiple pages per sheet and print edge-to-edge brochures.

HP has started quoting page speeds according to the new ISO standard and this shows up the difference between normal mode print and draft mode, which we suspect most manufacturers still include purely to generate high numbers for marketing.


The numbers here are 35ppm and 34ppm for black and colour print in draft mode and 15ppm and 11ppm for the equivalent in normal mode. When we ran our five-page black text print we saw a speed of 8.11ppm, but with a 20-page document, it rose to 12.63ppm, not far off the 15ppm quote.


Our five-page text and colour graphics document could only raise 5.77ppm, though, so we still think the quoted speeds are optimistic, when printing documents of typical office length. However, the speeds are comparable with those from lower-end colour laser printers, which are HP’s target market, so this OfficeJet Pro is still a viable alternative as a single-sided page printer. 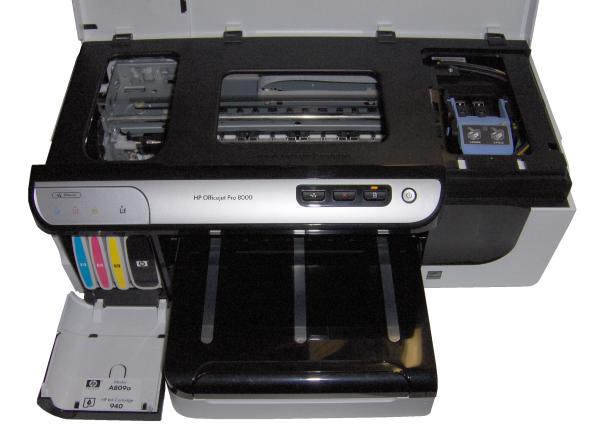 When it comes to duplexing, things are worse. Partly because HP has chosen to use pigmented inks in this machine, which are fully waterproof and better at resisting colour fade, the machine has to wait for the ink to dry between printing obverse and reverse sides of each sheet. It waits roughly 10 seconds, so when you’re printing a 20-side document, this adds the best part of two minutes to the print time.


In fact, when we printed our 20-side document in duplex mode it took 5:38, equivalent to 3.55 sides per minute, or 1.78 duplex pages per minute. It’s a shame it’s so slow, as the lack of speed may well discourage people from printing duplex documents, with the associated paper savings that produces.


The quality of prints from the OfficeJet Pro 8000 is pretty good. While inkjet print is never going to have quite the sharpness and clarity of dry toner laser, black text is very clean, with no signs of ink feathering into the paper. This is another advantage of pigmented inks.


Colours are bright and dense, with excellent registration of text over coloured backgrounds and very little variation in areas of solid colour. Although this is intended as an office printer, photo prints are better than anything you will see from a colour laser, with natural colours, and many more hues available. HP provides two print modes, normal and best, but best takes a lot longer and we could see no noticeable differences between the two images we produced.


Assuming you’re using high-yield cartridges in your printer, the running costs come out very competitive with laser print. We calculate an ISO black page should cost around 1.75p and an equivalent colour page 4.64p. Compare this with, for example, the Konica Minolta Magicolor 1600W, reviewed recently, which costs 3.71p for black and 13.43p for colour.


HP’s OfficeJet Pro 8000 is a solid, hard-working office inkjet, which produces near-laser quality text and graphics and far-better-than-laser quality photos. Apart from when printing duplex (a feature most entry-level colour lasers don’t offer) it’s also as quick. It costs less to buy, less to run and has a far simpler mechanism than any laser, so really is a valid alternative to an entry-level colour toner-based printer.