Most multifunction printers stick a flatbed scanner on top of either an inkjet or laser print engine, producing quite bulky, if very useful, office machines. There’s another way to go, though, if you have little need for scanning books. An extension of the humble fax machine, these multifunctions use a feed-through fax head and take up a lot less space on the desk.


HP’s LaserJet M1319f MFP uses this approach, with a feed-through scanner mounted on top of its mono laser engine. It does have a small desktop footprint, but to achieve this there are three flimsy input and output trays. You need to position the machine where you can be sure no one will knock it as they walk past. 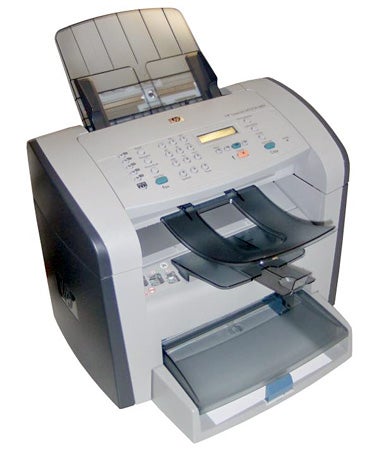 At the bottom is a mono laser printer with a 250-sheet paper tray sticking out the front and a 10-sheet, multi-purpose feed set in the tray lid for special media. Output from this print engine feeds to a projecting plastic tray, with a telescoping extension and flip-up paper stop to take finished pages.


Now, think of a typical desktop fax machine which feeds paper from a tray at the back to another at the front and fit this on top of the laser printer. The scanner input tray can take up to 30 sheets and the output tray fits directly above the output from the printer. 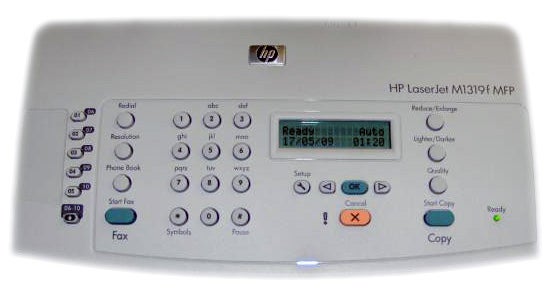 The control panel is largely based on its fax function, with 10 quick-dial memories, as well as a number pad for less regularly used calls. There’s a two-line by 16-character LCD display with a backlight and, on the side of the machine, a telephone handset supplied as standard. The only connection is via a USB socket at the back, though there’s another for a fax phone line.


The scanner section of the machine folds up to provide access to the slot-in drum and toner cartridge, which slides a long way into the depths of the machine. Software installation is straightforward and includes IRIS OCR software, as well as HP’s own scanning and printing utilities. The scanner is an LED-lit, colour device, with a resolution of up to 600ppi and can be used for direct scanning of images or text.

HP claims a print speed of up to 18ppm and in our speed tests we saw a speed of 10.7ppm on our five-page job, which increased to 15.6ppm on the 20-page document. This is quite close to the headline figure and is a good result. Copying a five-page text document took just 42 seconds, so this is a worthwhile personal copier that isn’t going to keep you waiting during normal use.


Print quality is pretty much what you’d expect from a mid-range mono laser printer from HP. In other words, it gives clean, sharp text from its 1,200dpi engine and characters look smooth and clean, even at small point sizes. 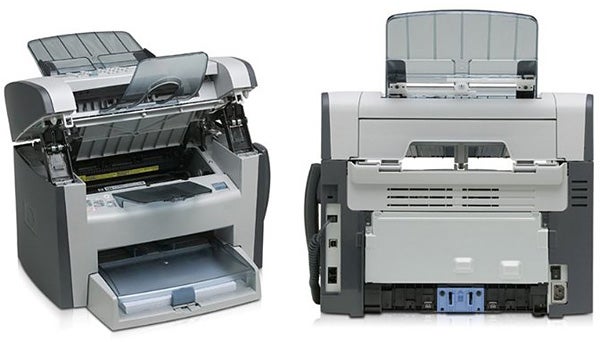 Greyscale graphics are also quite presentable, though dark greys can look patchy and there is some evidence of banding, though not that noticeable. It’s also there on our photo image, though the print is well-detailed and includes good shadow detail, which isn’t always the case with mono lasers.


Copying text via the scanner produces a fair result, though the intensity of the black print is diminished. Greyscales don’t reproduce well in copies and some of the lighter tones are virtually lost. Darker tones show increasing breakup and text over the top of dark grey hues is hard to read. 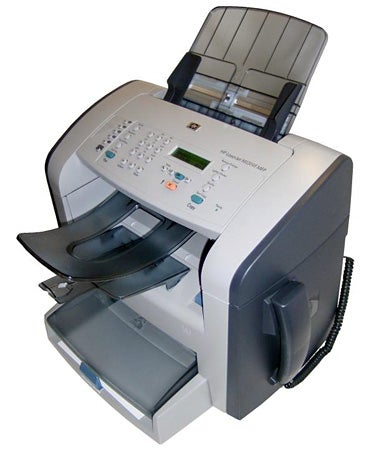 Colour scans to a PC were OK for general use, but if you’re trying to bend the machine to more enthusiastic photo work, you’ll be disappointed. Default scans are light on yellow and not as sharp as from typical flatbeds in the same price range.


The only running cost is the single drum and toner cartridge, which at £50 or so from Internet retailers and with a yield of 2,000 pages, gives a cost per page of 3.4p, including 0.7p for paper. Although there are some machines with a higher black print cost, for example the Samsung ML-1640, the more typical cost is around 1.7p, so it comes out at around twice the norm.


Given that the LaserJet M1319f costs over £200 and that it has no facilities for scanning or copying of books, it needs to do its other jobs well to look like good value. Unfortunately, although it prints and copies quickly and is easy to maintain, print costs are high; almost double those from some other models. Text prints are good but greyscales are indifferent and poor if they’re from copies. This is not really what you want from a multifunction, so it’s not one we can recommend.