Many who would have bought a cheap inkjet printer a few years back, will now go for an all-in-one, because the price is little more and you get the extra convenience of copying and scanning. The same logic applies to personal mono lasers and HP has just refreshed its range. The LaserJet M1132MFP comes in at just £120, so what do you get for the price of a night in a London hotel? 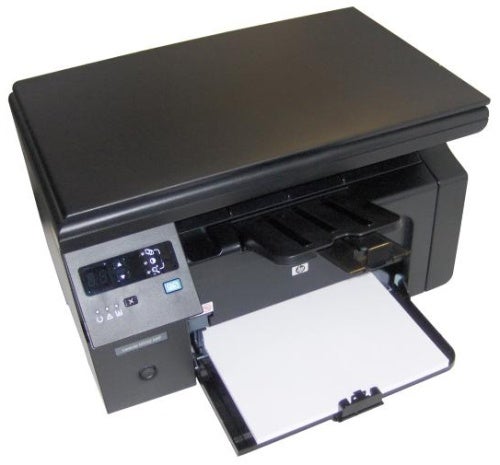 Most of the curves of the previous models have gone and the jet-black casing is based around verticals and horizontals. As with the mono laser printers of which this machine is an extension, it has a feed tray that pulls down from its front surface, with no cover for loaded paper. Above this 150-sheet tray is a clip-on output support, which takes the printed pages, so the design ends up more functional than elegant.


A low-profile, Contact Image Sensor flatbed scanner sits on top of the printer section of the machine and has no Automatic Document Feeder, so the machine can only handle single-sheet scanning. 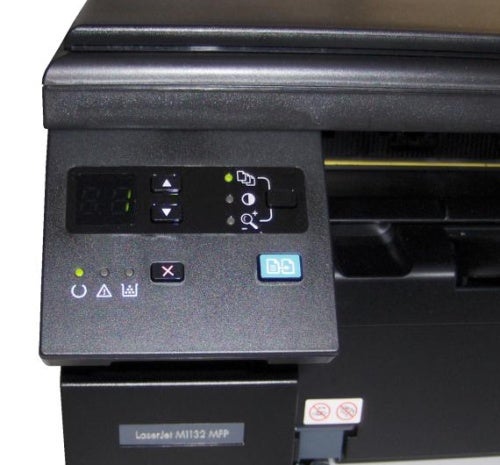 Equally basic is the control panel, which folds out to three different click-stops and relies on two, seven-segment LED displays, rather than any form of alphanumeric LCD. This display is difficult to read from an angle, because of a segmented mask positioned in front of the LEDs. It’s used to display number of copies, brightness and copy magnification level.


A single selection button toggles between these three modes and two arrow keys deal with numerical adjustments up and down. There’s a small button to start a copy and another to stop a current job and three more LEDs indicate data, errors and low toner. A power button is positioned lower down, on the body of the machine, and a single USB socket is the only data connection, at the back.


HP incorporates its Smart Install feature on this machine, which we’ve only seen on a few devices before. It means that, on a standard Windows installation, you don’t need to use the supplied driver CD, but can simply connect the all-in-one and switch it on. The connected PC then receives a download from the printer of the necessary drivers and control software, so it effectively installs itself. 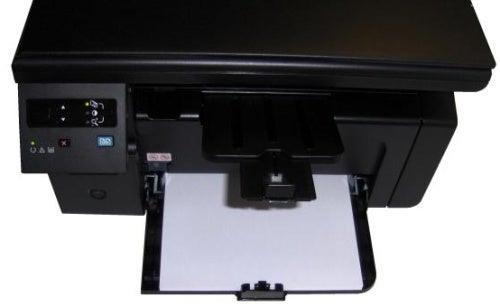 This is a much simpler process than a CD installation, but doesn’t work for OS X or Linux, though there are drivers for both. The machine’s first task, once installed, is to print a handy quick-reference sheet for its controls.


The single-piece drum and toner cartridge slides well down into the heart of the machine, once you’ve lifted up the flatbed scanner and the top cover of the printer section of the device.

One of the reasons the printers and all-in-ones we test rarely meet the speed specifications their manufacturers give them is that those makers don’t include the warm up time required for laser fusers and scanning lamps in their speed calculations. Here, though, both components are said to be instant-on and this is reflected in the speeds we measured.


Although this is a modestly priced device, HP rates it at 18ppm and our five-page text document took 23 seconds, giving it a speed of 13.0ppm. On the longer, 20-page document, this rose to 15.8ppm, so we could see this machine reaching its rated speed on long print runs.


It does start to print within a few seconds of sending a job, too, something we rarely see on any all-in-one, especially a budget machine. A 15 x 10cm photo print on an A4 sheet took just 11s. 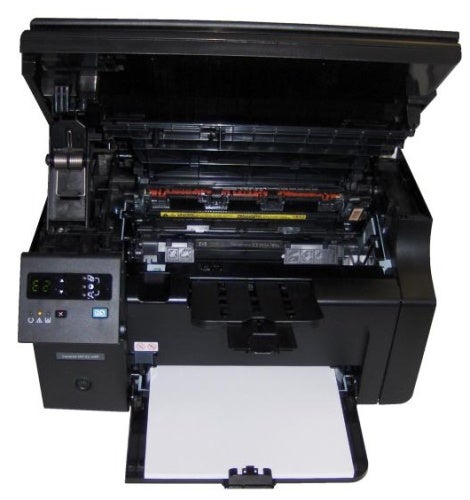 While the printer is close to instant-on, the scanner still takes a while to start each scan, with half of the 26 second copy time we measured taken up before the scan head started to move.


The prints the LaserJet 1132 produced are more than adequate for general SOHO (small office, home office) use and the default 600dpi resolution produces clean and well-formed text characters. Greyscale graphics are a bit on the blotchy side though, with black text hard to read on some of the darker greys. Our test photo print, at the enhanced 1,200dpi resolution, is better than many, with darker shades showing up well.


Copies of printed greyscales are pretty hopeless, though, with darker tones coming out virtually black, so overprinted text is unreadable. Even lighter greys are very blotchy, so you’d be best leaving photocopying for text-based documents.


The single-piece drum and toner cartridge is the only consumable in this machine and there’s a single version of it with a yield of 1,600 pages. It costs around £50, giving a calculated cost per page of 3.9p. Although this is quite high, it’s no worse than many of its competitors, most of whom are only a few tenths of pence cheaper than their inkjet siblings. Gone are the days when laser print undercut inkjet by a big margin.


HP’s LaserJet M1132MFP is a good, general-purpose, personal laser all-in-one and its easy installation and comparatively fast print get it off to a good start. The good quality text and graphics print is marred by poor photocopying of greyscale materials, but running costs are no worse than average and the design of the machine is only spoiled by the lack of a cover for the paper tray.