HP produces mono laser printers ranging from small personal devices up to huge departmental behemoths. The LaserJet 2420d sits some way above the personals and is a fast office or small workgroup device. This model isn’t enabled for network use, though you can add various cable and wireless options as needed.


The price may appear high for a non-network printer, but is largely down to the machine’s claimed speed, which at up to 28ppm is very good for this class of device. The printer also has a duplexing unit as standard, so can print on both sides of the paper in a single job.


Most laser printers are basically rectangular boxes and this HP device is more boxy than most. Coloured in pale and dark grey and highlighted with orange and green buttons, it’ll fit in well with most office décor. Paper feeds from a 250-sheet tray that slides out from the front bottom of the printer and delivers printed pages to an indent in the top surface. A second, optional tray, holding 500 sheets, can be fitted under the printer. 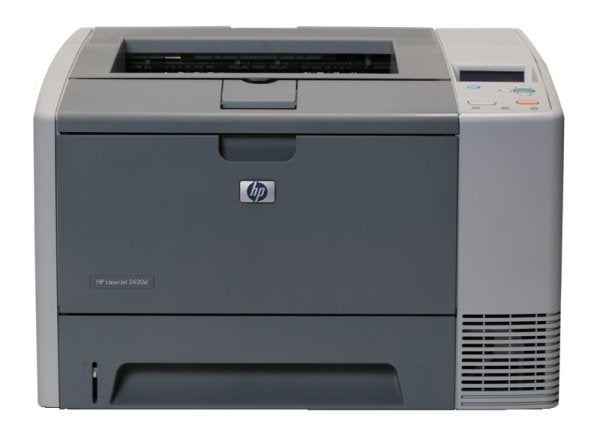 Directly above the paper tray is a pull-down, telescopic multi-purpose tray and the whole of this mechanism folds forward for access to the all-in-one toner and drum cartridge. At the back are sockets for parallel and USB 2.0 connections, though Ethernet networking is only an option on this model.


The control panel, on the right-hand side of the output tray, includes seven buttons and a two-line, 16-character, backlit LCD display. The fairly complex menuing system is reasonably well structured, though with some of the menu options running to two lines, it’s not always easy to see where you are in the hierarchy. Fortunately, you can print out a complete menu map. A blue Help button pops up hints and suggestions on the LCD display, should you hit problems while using the printer.


Physical installation is simple, as HP sticks to its tried and tested, integrated toner and drum cartridge. This is a bit more fiddly to insert than in most mono lasers, but with a claimed life of 6,000 pages, you won’t have to do it too often.


Software setup is also pretty straightforward, as the supplied CD includes both the printer driver and HP’s LaserJet Toolbox applet. As usual, you install software before making the USB 2 or parallel connection.

The only problem we hit was that once the software setup was complete, the 2420d refused to offer a duplexing option in its printer dialogue, offering just manual duplex. We got round this by switching on the ‘duplex option installed’ switch in the driver, but in the ‘d’ version of the printer duplexing is standard, not an option, and should have been sensed at install time. Once set, the duplex function worked as expected.


Surprisingly, for an HP laser printer, there are some problems with the print quality of the 2420d. While black text comes out clean and precise, reproduction of grey scales is less good. Our mixed text and business graphics test page produced spatters along drawn lines, which were reproducible across several pages. Tinted fills were also uneven and looked bitty, even after we had removed the toner cartridge and shaken it to check an even displacement of toner.


Photographic reproduction, using the printer’s highest quality ProRes, true 1,200dpi resolution, also showed a graininess in what should have been areas of smooth tone, such as sky. Some detail in foreground images was lost.


Print speeds were pretty good, with our five-page text document printing in 22 seconds, giving a true print speed of nearly 14 pages per minute. Since these are printed at normal, rather than draft, quality, it’s a pretty good result. Our text and graphics page completed in 11 seconds, so nearly 5ppm there, too. Even the 5 x 3 photo print took just 12 seconds to print.


Print costs are very easy to work out on this machine, as all you have to consider is the cost of the integrated toner and drum cartridge, which we found at a minimum price of around £69. HP claims 6,000 pages at five per cent cover for this cartridge, which gives a cost per page of 1.62p, including paper. This figure places it in the middle of the field of mono lasers we’ve tested in the last year.


As a new LaserJet from HP, the 2420d should be a good, solid office laser printer, but the problems we had with its duplex function and the question mark over some of its print output, left us less impressed than we expected. If you’re paying this kind of money for a laser printer, the quality of the print output should be taken as said… it isn’t, here.