Once upon a time, HP was firmly at the front of the Windows Mobile Pocket PC pack, its new ranges of devices eagerly awaited, particularly within the business community, which is where it focussed its attentions.


That’s changed as more and more companies have come on board the Pocket PC bandwagon, and these days, HP is more within the pack than leading it. This is not to say that the company doesn’t still turn out good devices, just that the competition is tougher, and HP has had to work hard to survive. 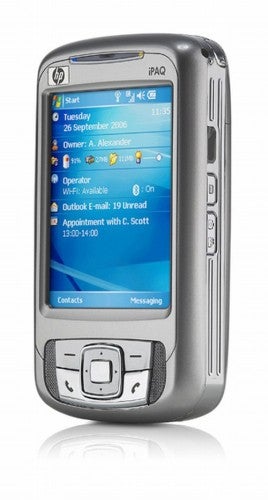 It is in that context that the iPAQ rw6815 Personal Messenger has to be evaluated. It’s ironic that HP dubs it a ‘personal messenger’ because equipped as it is with Direct Push, a corporate could let employees synchronise calendar, contacts, tasks and email over the air. It would be a good way to use its support for Tri-band GSM, GPRS and EDGE.


Surely this turns it into more than a ‘personal’ device?


In terms of design, HP has come up with something that looks rather different from the norm. It is all round silver, which these days is the exception rather than the rule. Most of the casing is plastic, and the battery cover feels rather flimsy. There is a nasty plastic cover which protects the screen – but doesn’t stretch far enough down the front fascia to protect the front buttons too.


You can see through the cover to check on the display, and it lifts easily when you need to touch the screen. You can also, thankfully, remove the cover completely just by gently pulling it out of the small sockets that hold it in place. I did that almost immediately never felt the need to put the thing back. If you are worried about protecting the screen, the provided soft case (with integrated belt clip) does the job nicely. 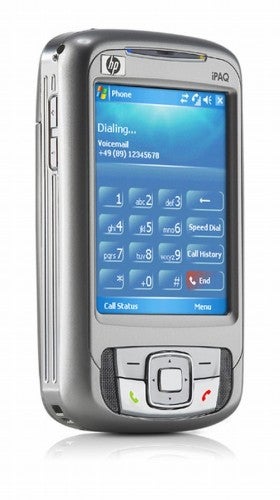 The iPAQ rw6815 Personal Messenger is shorter and fatter than most PDAs at 102 x 58 x 19mm and its somewhat squat format feels quite comfortable in the hand. Its 140g is OK for a device which packs as much punch as this one does.

Fortunately, the slightly unusual dimensions have not led to a compromise on the screen, which measures 2.7 inches corner to corner, and delivers 240 x 320 pixels and 65,000 colours.


Under the screen, to the left and right of the softmenu buttons and Call and End keys, are two speakers. HP’s specifications indicate that these are in fact stereo speakers, but frankly they are so close together that there’s no way I could hear any stereo effect from them when playing music.

However, if HP has gone to the length of providing stereo speakers, why has the company supplied a headset with a 2.5mm jack with no port for a standard 3.5mm one without investing in a converter?


There is also a question mark over the wireless connectivity. It is great that the triple play of infrared, Bluetooth and Wi-Fi all make an appearance here, though the latter is 802.11b only.

HP has done a good job where device memory is concerned. There is 114MB of free memory for storage of applications and data, which is considerably more than most Pocket PCs in the current range are able to offer. If you want more, the expansion medium of choice is miniSD cards, and thankfully the slot is on the casing – on the top edge to be precise – rather than hidden away under the battery.


There is a two megapixel camera built into the iPAQ rw6815 Personal Messenger and its lens is accompanied by a tiny self portrait mirror – almost too small to be of any use at all. There’s a twin-light LED flash too. Once you’ve activated the camera by pressing the button on the right edge of the casing it is easy to access the various camera controls and options by tapping icons on the screen.


Hewlett Packard adds some software to the Windows Mobile Pocket PC standard fare, including voice control and some software for manipulating images shot with the camera. Compared to what you get with some other Pocket PCs the bundle is rather feeble. 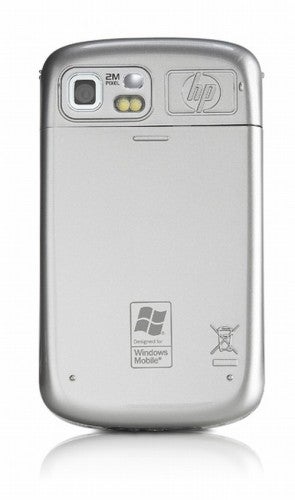 Battery life too was not quite what I would have liked. Continuous MP3 playback from a miniSD card with the screen forced to stay on got me eight and a quarter hours of music. I’ve seen some Windows Mobile Pocket PCs recently approach and even pass ten hours under the same regime, so this is a case of ‘could do better’.


In fact, ‘could do better’ seems like a fair overall judgement on this device. It is a comfortable Pocket PC to use, and not too bulky to carry around. But while it comes up trumps in some areas, most notably built in memory and memory expansion, it lets down in others, such as the lack of ‘g’ Wi-Fi support and slightly less than top notch battery life.