There was once a time when the next HP iPAQ handheld was awaited with great expectancy. At a time when mobile phones were pretty basic, the pocket PC was the ultimate in corporate gimmickry: a place to store all your contacts, calendar info, notes and something you could expand to include even GPS functionality, pocket PCs running Windows CE were seen as rightful heirs to the Filofax crown of the Eighties and early Nineties.


But things, as they tend to do in the world of technology, have moved on dramatically since then. It’s now a rare sight to see a device running the latest version of Microsoft’s mobile device operating system that doesn’t have phone technology built in as standard. And, rather than those famous ‘jacket’ add-ons so prized amongst iPAQ enthusiasts of yore, advanced features such as Wi-Fi, high speed mobile data connections and GPS are increasingly being thrown in as standard 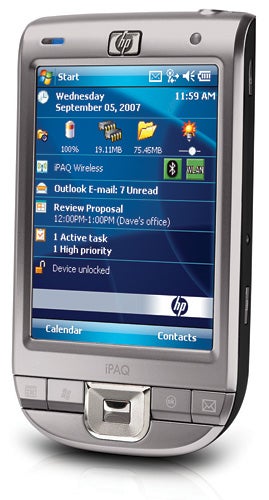 So it’s hard, initially, to see a market for the latest phone-free iPAQ – the 114 Classic Handheld, based on Windows Mobile 6.0 Classic. But I suppose it could fill a niche. After all, not everyone wants their phone and organiser on the same device. If you want to be free from your work schedule and email when you get home, for example, splitting your workload across two devices makes some sort of sense, and it also makes sense if the handheld organiser has other benefits, such as a fast processor, a good quality screen and is stuffed with other useful features.


And to some extent the iPAQ 114 meets those requirements. The first thing to say about it is that it looks every bit the smart-suited businessman’s or woman’s accessory. It may not have the chic appeal of, say, the E-TEN Glofiish PDA phones I reviewed earlier this month, but it is slim at just 13mm and its understated grey fascia and rubberised plastic rear lends it an air of understated quality. I also really liked the controls, which are simple and responsive, and the HP customisations on the Today screen which display battery life, memory usage and a brightness control are handy too.

It also holds some advantages over phone organisers such as our favourite TyTN II or the aforementioned Glofiish devices. The first of these is that it doesn’t need to be a slave to pocketability – you don’t have to keep it handy so you can answer calls – and it can therefore boast a larger screen without being too inconvenient. In this case the screen is a spacious 3.5in and it’s a good one too: bright and clear, and it’s transflective so viewing outside in bright sunshine isn’t a problem. The 114 even has a light sensor on it that -because the display is transflective – will dim the backlight in brightly lit environments and boost it when it’s darker.


The inclusion of Wi-Fi and a phone-style earpiece speaker set into the rear also means you can use the device to make VoIP phonecalls when at home or in the vicinity of a hotspot. I downloaded Skype to test this and it seemed to work just fine, though the quality of calls will of course depend on how stable your connection to the Internet is.

Under the hood it has a more powerful processor than most Windows Mobile smartphones can boast – a 624MHz Marvell PXA310 – and it feels highly responsive to use. I loaded it up with over 400 contacts and stuck a 2GB memory card in its SD card slot that was full of data. I then performed a full data search with a single keyword and it took only a few seconds to complete. Contact searches, meanwhile, were instantaneous and even with a whole load of applications up and running, it didn’t feel sluggish switching between them (perhaps because it’s unencumbered by having to run a phone at the same time). Helping the performance along is a generous allocation of memory – there’s 256MB of ROM and 64MB of RAM – while other advantages include a 3.5mm headphone socket, so you can use decent wired headphones to listen to your music if you want.


It’s a good start, but alas that good performance doesn’t continue. The rest of the 114’s feature-set just isn’t up to the level we’ve come to expect of the modern connected organiser, and even if you pass over the fact that you can’t make mobile calls on the device, it’s impossible to ignore the shortcomings. I’ll start with the screen, which though bright and clear is comparatively low resolution at 320 x 240 pixels. I’d have hoped for at least a VGA screen here, so you have to rely on Cleartype if you want to get more than a few emails on-screen at once.

There’s also little in the way of decent software extras included apart from the HP Today screen optimisations mentioned earlier – there is a voucher in the box that gives you a choice of free software to download from the iPAQ Choice website, but the options aren’t wide-ranging, consisting of a small selection of games and a couple of bits of productivity software. Compared to what you get with a Glofiish device, where a whole raft of extra features is bundled, it’s a bit on the mean side. 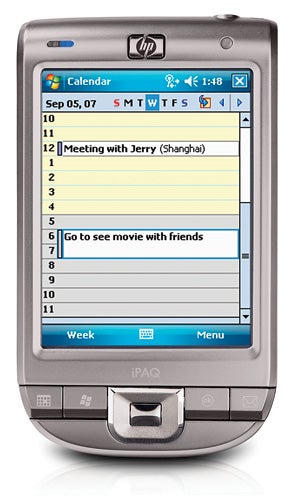 And though Bluetooth 2.0 and Wi-Fi are included, there’s nothing else I’d consider a valuable extra in PDA terms: no built-in GPS receiver, for instance, no synchronisation cradle, and not even a low resolution digital camera.


Even battery life from the 1,200mAh lithium ion battery – which you might expect to be last longer than the average PDA phone since it doesn’t have a GSM or mobile data connection to maintain – isn’t that impressive. With the iPaq 114 fully charged, you’re unlikely to get more than two days full use out of it. I used it in and around the house leaving the Wi-Fi on and the power settings under orders to switch the backlight off after 30 seconds and the device off after two minutes of inactivity and it never lasted more than 48 hours after a full charge.


Overall, as a basic Windows Mobile organiser, the iPAQ 114 does hold some appeal. It’s not horrendously expensive and has some nice features such as that light sensor, its large readable 3.5in screen, a 3.5mm audio socket and a very quick and responsive performance.


But in a world where you can have a slim, smart PDA phone, such as the Glofiish X600, with GPS, a camera and a higher resolution screen on a contract for even less money than this, you have to question why anyone would choose such a device.