If you spend much of your working life on the move, you’ll probably carry a notebook PC with you. So, how do you get prints from it? You could pop into an Internet café and hope they have something compatible, or you can carry a printer with you. HP’s DeskJet 460wbt is designed for print-on-the-move, offering high-quality output in a small, light (comparatively) box, with battery power and easy connection through WiFi or Bluetooth.


The whole of the 460 series – you can get the printer without the wireless connections, too – has a rather different take on design from most DeskJets. You lift the cover to form a rear paper tray and prints exit straight onto the desk, with no attempt at an output tray. 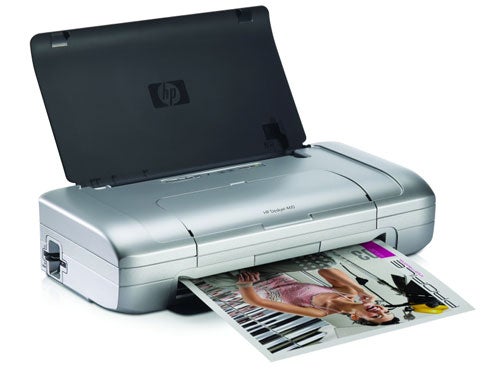 
On the top surface are three buttons and five led indicators, several of them multi-colour. These leds are used to indicate all kinds of status conditions and while some are obvious, like orange lights to show low ink, others are less obvious and send you to the user guide for decryption.


A double slot in the side of the printer takes CompactFlash and SD/MMC cards, but also doubles as the connection for wireless networking. Both 802.11b and Bluetooth cards are provided, in CompactFlash format, and you can plug either in (though not both at one) as needed.


At the back, along with the USB and PictBridge sockets, is a cylindrical, clip-on Lithium Ion battery pack, which HP claims will last for up to 450 pages, coincidentally that’s also the rated capacity of the ink cartridges. 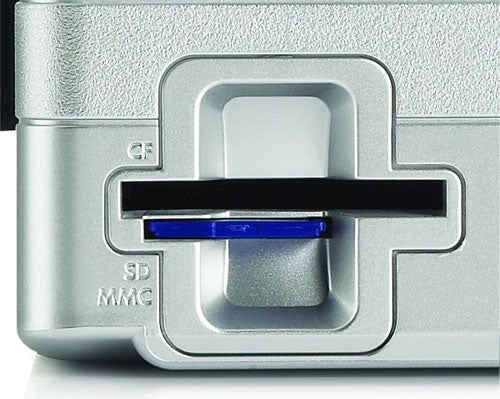 The easiest installation option is USB, where setup is very straightforward and follows the usual ‘install the driver then plug in the printer’ approach. If you want to use the printer as a WiFi device, you’re recommended still to install via USB first, before running a second installation for 802.11, after which you can disconnect the USB cable and the printer will work wirelessly.

We repeated all our speed tests, using USB 2.0 and then WiFi connections. The printer is only 802.11b compatible, so even when connecting to an 802.11g network, you’ll only get the slower speed. It worked flawlessly, but was considerably slower when using wireless, even though the networking software showed a ‘strong’ signal.


Our five page text document took just over a minute to complete with a USB link, giving a print speed of around 4.4ppm. Connected wirelessly, we got just under 2ppm. With the mixed text and graphics page we saw just under 2ppm, but this dropped to 1.5ppm with WiFi. Finally, the 15 x 10cm photo print took one minute 46 seconds to compete as a four-colour print and one minute 57 seconds in six colours. With a wireless link, the best we saw was two minutes 12 seconds, for four colours. 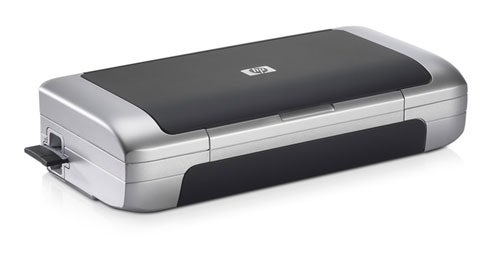 HP, and other suppliers, sell their six-colour cartridges on improvements in colour rendition, particular in light colours like flesh tones and skies, which are helped by the photo cyan and photo magenta inks. Comparing the outputs of four and six-colour prints from the DeskJet 460wbt, we could see very little difference. Our test photo has a pale, variegated sky, but this only showed marginal improvement.


Print quality is generally very good, particularly for a portable printer. This is in part due to HP’s Vivera inks, which we’ve been impressed with before. Colours are well developed and smooth, but there’s also plenty of detail in more intricate images. Text print is generally quite clean, though there’s a little bit of spatter when you look closely at the uprights of capitals.

In general use, there are two cartridges; one black, the other tri-colour and each is claimed to produce up to 450 pages. We beat this with the black, but fell short on the colour, giving running costs of 2p and 24.7p for five per cent black and 20 per cent colour, respectively. Both these figures are well above average, and compare well with many standard desktop ink-jets.


There aren’t nearly as many options to choose from in portable ink-jets as in desktop printers, but HP has done a more than reasonable job with the DeskJet 460wbt. It prints well, can run from a battery and works wirelessly, when needed. Running costs are fair, too, but we can’t see a lot of point in indulging in six-colour photo print.