Having recently looked at the most expensive ink-jet printer HP sells, the Photosmart eStation, we thought we’d go to the other end of the spectrum and test out the company’s cheapest machine. The Deskjet 1000 is widely available from PC World, to Tesco and to a number of online specialists, at prices down to £30, making it just about the least expensive entry to inkjet printing 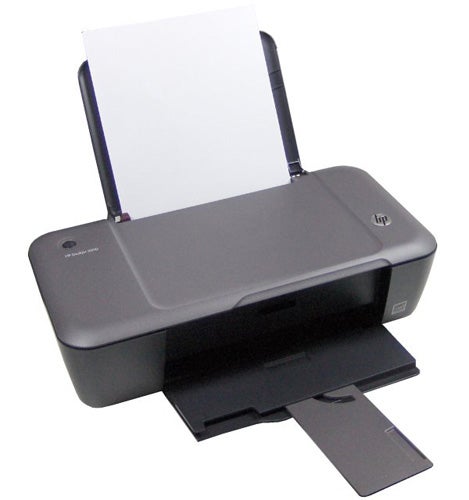 Straight out of the box, this is a small, neatly designed, single-function printer in dark grey with a strangely coloured top, and just a hint of mauve about it. The paper feed tray hinges up from the top of the printer and could hardly have a simpler design, though it does have a raised pattern of curves moulded onto it.


The front cover folds down to make the output tray, once you’ve also swivelled out an extra support from its front lip. The overall footprint of the printer is increased quite a bit with both these covers open and pages sitting on each tray. 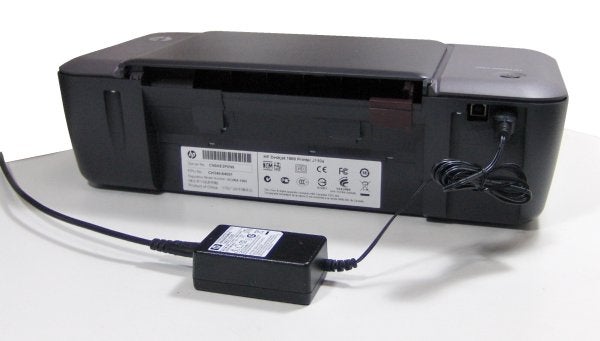 The only control on the whole machine is a single, illuminated power button near the back of the top cover on the left-hand side. In the back panel are just two sockets, one for USB connection, which is the only way to get data to the printer, and the other for a low-level power input.


It’s hard to believe HP couldn’t have incorporated the small block power supply inside the case of the Deskjet 1000 but, true to form, it’s an external unit ideal for kicking around under the desk. 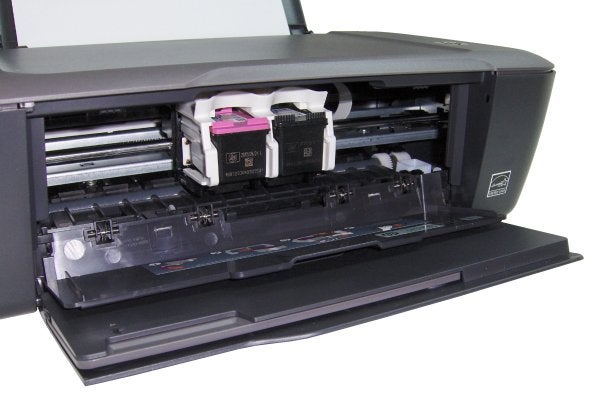 To fit the two ink cartridges, you pull down a secondary cover from the front of the printer and push them in and up into the carrier. It’s very quick and easy.


If you choose to use HP consumables with your machine, the company offers a series of rewards, like discounts off software and access to Wild Tangent games. After a happy hour playing Chicken Invaders 4, you may have forgotten paying £36 for a pair of cartridges, but in general, we think Kodak’s policy is better – charge less for the consumables, rather than giving rewards.


Drivers for both Windows and OS X are provided on the CD, though there’s not much else in the way of support software. They install easily and provide good support for the functions of the printer.

HP makes fairly modest claims for the performance of the Deskjet 1000, claiming 5.5ppm for black print and 4ppm for colour. These ratings rise to 16ppm and 12ppm when printing in draft mode. In our tests, the five-page black text document took 53s to run, which is a speed of 5.7ppm, actually faster than the rated speed. On the longer, 20-page test, the speed rose to 6.5ppm.


In draft mode, though, the speed was only 7.7ppm, less than half the claimed speed and in normal mode, printing black text and colour graphics, it was 2.4ppm, just 60 per cent of the rating. Finally, a 15 x 10cm photo on glossy paper took 1min 35secs in highest print quality. 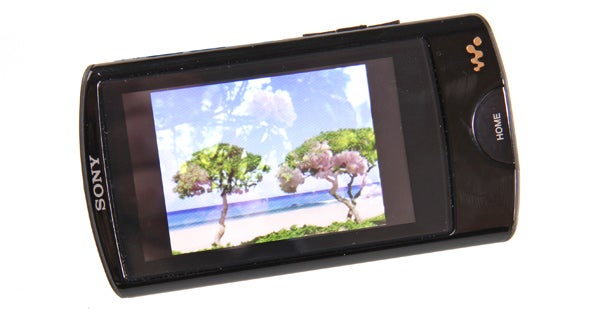 Print quality, given this is a £30 printer, is pretty reasonable. Black text is slightly marred by a little flow of ink along the paper fibres, which gives it a slightly fuzzy appearance, but for general use, it’s quite readable. Interestingly, draft mode text is, if anything, slightly cleaner, and we’d be quite happy printing black text in draft all the time.


Colour graphics are slightly dithered, but again quite usable for day-to-day documentation at home. Colours are a little pale in comparison to more expensive printers, but still acceptable. Photo prints are also good, though in our test samples they showed scuff marks from the feed rollers. 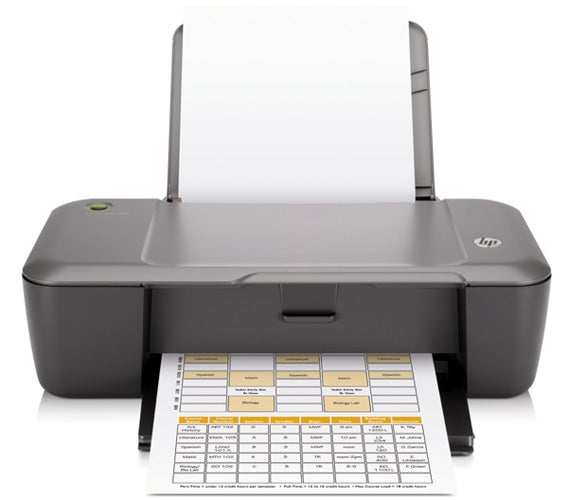 Noise levels from the Deskjet 1000 are a little higher than normal, though as is usual with inkjet printers, it’s mainly from peaks when new sheets are being fed.


The black and tri-colour ink cartridges are available in two capacities, though neither offer particularly high yields. Using the XL cartridges and the best prices we could find, gives costs per page of 4.6p for ISO black pages and 10p for ISO colour.


The colour cost is lower than from many more expensive rivals, even the Photosmart eStation. The black print cost, though, is higher than virtually all inkjets we’ve tested recently, except the Advent machines, which have a black print cost of over 6p per page.


Although the black print cost is quite high and the Deskjet 1000 can be a bit noisy, it’s still amazingly good value for £30. It prints text and graphics adequately and reasonably quickly, particularly if you switch to the surprisingly high-quality draft mode. If money is tight, or you’re buying a second printer, perhaps for your children to use for school work, this is a very good choice.