People often ask me if there’s a difference between buying from a major manufacturer and buying from a one that isn’t. This Compaq Presario V6000 is good proof that there is. Its look and finish is a cut above other brands with styling and design that is pleasing to the eye. Clearly aimed at consumers, the lid, bezel and main body are all clad in a smart slate grey shiny plastic finish with charcoal keys. It’s also feels very well put together and very solid, and I’d feel confident it could take a knock or two – though I wouldn’t want it too to keep that shiny lid nice and smooth. The lid has pleasing smooth edges with the silver Compaq logo ensuring that it will look good on the office table either open or closed. Ok, it’s not got Macbook looks but it’s not bad. At 2.99kg, it’s also no flyweight but it feels right in the lap. 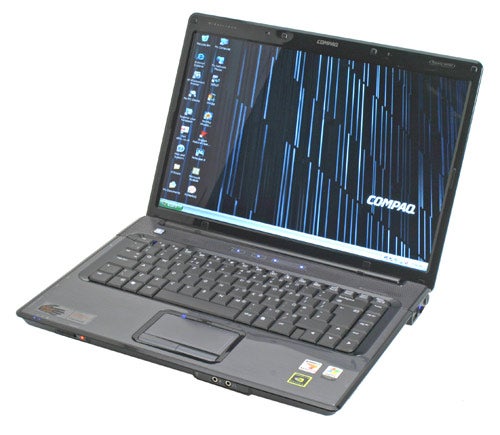 With the lid open you’ll take in the large 15.4in widescreen and some fetching blue lights dotted around the place – the power button and some lights built into the edge at the bottom left to indicate power, charge and disc activity. There’s also one above the track pad that glows blue when it’s on. Next to this is a handy button that can be used to turn off the trackpad, useful for when you have a mouse plugged in and want to avoid any accidental key presses. The light changes to red when you do this. Above the keyboard are volume controls and mute button and a button that can be set to launch an application of your choice. What’s cool about these is that these are touch sensitive buttons built into the chassis. The volume control beeps as you press it so that it actually both looks and sounds like the control panel from Star Trek: the Next Generation.


The keyboard on any laptop is one of the most important aspects and fortunately the one of the V6000 is of a very high standard. The key’s are well spaced so you don’t catch the corners as you type. There keyboard feels very firm to type on but not too rock solid, so the action feels comfortable. I had no issues with any of the key sizes or the positioning. The right shift key is wide enough and the enter and backspace keys are larger. The function key is second from the left at the bottom and gives access to second function keys on the F-keys. 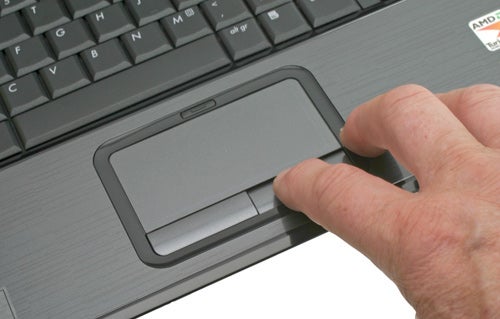 The track-pad is a perfectly reasonable thing but the mouse buttons underneath are a disappointment, being a little uneven – a shame considering the firmness of the keyboard.


As well as the keyboard, the screen is also very important but here the Compaq is only average. It sports a high gloss screen but it was overly reflective in the office but as soon as I turned the lights off, it looked a lot better. However, it suffered from very poor viewing angles in both the vertical and horizontal plane. With no lights shining on the screen and when sitting directly in front of it, it was reasonable though. 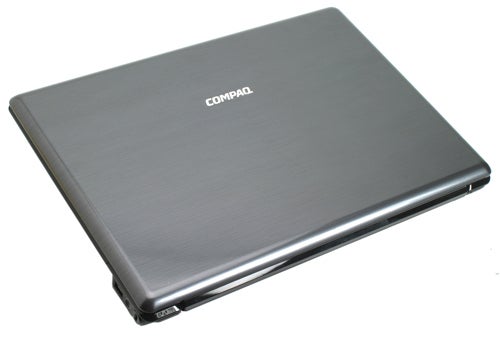 One of the most pleasing aspects of the Compaq is that its ports are sensibly located and clearly labeled. At the front you have the microphone and headphone sockets, which is just where you want them if you need to plug in a headset for Skype. You also have a switch for turning the wireless on and off, accompanied by a de-rigueur blue light. Note however, that Bluetooth is absent, which might remove this notebook from some shortlists.


On the left hand side you’ll find starting from the front, a 5-in-1 card reader, which can handle the usual suspects – SD, MMC, MS, and xD. Next is a mini-Firewire port, two USB 2.0 ports, a modem socket and a Gigabit Ethernet socket. Along from this is an HP Expansion port, which provides access to HP docking bays. Moving along you’ll also find a VGA output and an S-Video output, which is good news for presenting and entertainment.

On the right hand side you’ll find a single USB port and the power socket. When the power adaptor is plugged in you get yet another blue light – nothing if not consistent. There also a security hook for keeping your notebook tethered when you don’t want it going walkabout. The optical drive included is a multitalented type that can handle pretty much any conventional disc you can through at it, such as dual-layer disks and DVD-RAM. A cool feature is that it’s Lightscribe capable – which is a bonus over most notebooks. It might be so cutting edge once HD DVD or Blu-ray finally appears but those will be very niche and expensive products at least for a while. Fixed storage is taken care of by a 120GB drive – nice and large for a notebook, though it won’t break any speed records.

The only notable item of the reader is an exhaust area for the CPU. The processor in question is an AMD Turion X2 Mobile. The mobile supplied is a TL-52, which has a clock speed of 1.66GHz, similar to a Core Duo T2300. With Intel’s strong comeback with Core Duo and Core 2 Duo, it’s almost a surprise to see an AMD chip but we’ll talk about performance shortly. The CPU is backed up by a decent 1GB of RAM supplied on two DIMMS. This at least means you get dual-channel, but there aren’t any slots free so if you think you need more you’d better specify it at purchase. 1GB as standard is better than many notebooks we look at, such as Samsung’s X11. The CPU and memory sit in an nForce 430 chipset and operate as an FSB of 533MHz.


As an nForce chipset, graphics are provided by integrated GeForce Go 6150 with 128MB of dedicated RAM. I have mixed feelings about whether this is a good thing or not. nVidia are strongly associated with gaming and someone who sees this notebook in PC World who thinks they know about computers might is likely to see it and think that this machine will be great for gaming. It’s not. The 6150 will certainly be better than Intel’s integrated efforts, as the PC Mark graphics score for the Samsung X11 demonstrates, but it does not a gaming laptop make.

It will give you better video playback quality, but the cost for this is performance, as the DVD playback time shows – when unplugged it’s 34 minutes shy of the Samsung’s X11. This is despite MobileMark 2005’s application battery life test being almost identical. The performance score is actually slightly higher than the Samsung, which features a 1.66GHz T2300 Core Duo.


This pattern continues with SYSmark 2002 with slightly faster scores all round. The CPU score in PCMark 05 is actually lower than for the Samsung’s Core Duo. The difference then is that the Compaq features double the Samsung’s memory and it’s running in dual-channel mode, which helps it pull ahead. 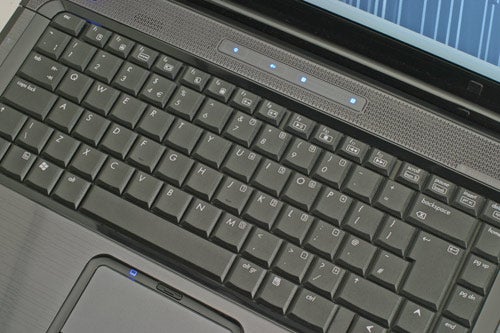 The machine has Windows XP Home Edition pre-installed with Works 8. Some useful HP software is included and you might or might not appreciate the talking guide that activates on first boot up offering to connect you to ‘recommended’ services and initially you’ll also get spammed with adverts for Microsoft software – a downside of buying from a large Corporate name.


Overall, judging from these two machines, there’s not a lot to choose from in terms of performance and staying power between the Core Duo T2300 and the Turion X2 ML-52, which is good news for AMD. The HP Compaq is cheaper though, enabling it to be paired with more memory, which gives it the edge in this case.


This means that it’s the rest of the specification and the design that the decision is based on. Here, the cool finishing touches, and the sleek look of the Compaq pay off. It just looks like a more stylish product than the Samsung that will look better in the home environment. It’s also cheaper and has a better memory complement. If the two were side by side, I’d be choosing the HP Compaq V6000.