HP has taken a circuitous route in the netbook market. It started out with its business focussed HP 2133 Mini-Note PC, which while regarded as one of the best looking and best made netbooks around, was short on power and longevity. Sometime later it released the HP Compaq Mini 700 and with it eschewed the conventions laid down by other manufacturers, opting for a less is more approach and a classy look and feel. With the HP Compaq Mini 110c, HP appears to have relented to market pressure with a more conventional proposition.


While it’s based on the Compaq Mini 700, closer inspection reveals plenty of differences. The 110c is now chunkier and houses a proper VGA output instead of the mini variety from before, and in general the materials feel a little cheaper, with a coarser matte black plastic finish and no ‘frameless’ display. At least in the latter case this could be construed as an improvement, since the 10in, 1,024 x 576 resolution display has an anti-glare finish more conducive to outdoor use. 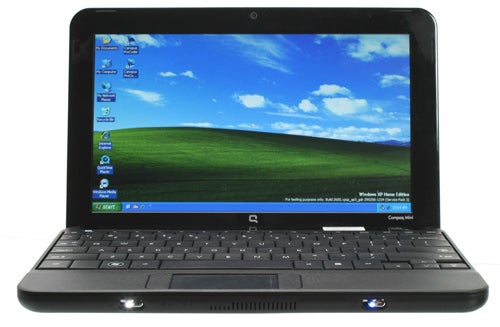 Overall, though, this remains an attractive and well put together machine. While the glossy lid does attract the usual grease and grime, it’s not repeated on the body of the machine like many recent efforts. It’s also a sturdy feeling device, so should be able to survive a few bumps and scrapes. 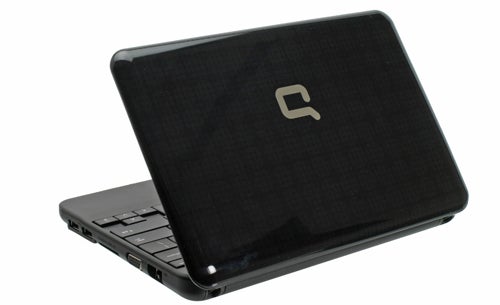 Lifting the lid reveals an interior largely unchanged from before, which is good news where the keyboard is concerned. Stretching right to the edges of the chassis, the 92 per cent full-size keys are great to type on, proving both roomy and positive in action. Our pre-production unit came with a US style Return key, but expect that to change on those shipped to customers. 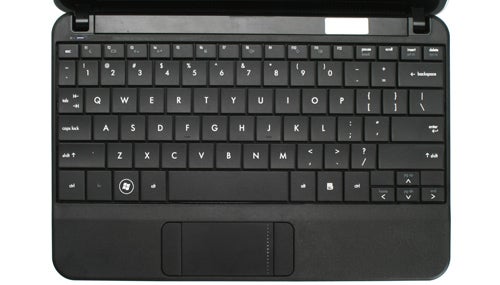 Unfortunately, one thing that’s unchanged is the touchpad, where the buttons remain on either side. This has always been a slightly awkward arrangement, although it is one you do get accustomed to. All the same, if HP really wanted to it could surely use a better layout, especially considering the buttons can interfere with typing from time to time.

On the hardware side of things the 110c is about as ordinary as they come. Naturally there’s a 1.6GHz Intel Atom N270 processor, 1GB of RAM and a 160GB hard drive – this much you should know already. You also get 802.11b/g Wi-Fi, Bluetooth and a webcam.

The same goes for connectivity, too, though this model does share the Mini 700’s lack of a second audio jack, with just one port serving both headphones and microphones. Aside from this, it’s the usual trio of USB ports, a VGA output, multi-format card reader and Ethernet port.


It would have been nice if some of the benefits found on the recent Toshiba NB200 were here, like the sleep and charge USB ports, but the HP costs less than even the basic NB200, which goes some way to appeasing the disappointment.

Indeed, of all things, the 110c’s strength lies in its price. While most manufacturers seem intent on pushing all new netbooks above the £300 mark, prices for the 110c start at £249 for the three-cell battery version, rising to a reasonable £279 for the six-cell version. Of course, as we’ve counselled many times before, we’d definitely recommend the six-cell version for its better battery life, especially given the meagre results provided by the three-cell one we have.


In our testing we managed just less than two and a half hours of video playback, which is fine if you’re using a netbook when commuting, but isn’t going to cut it elsewhere. Since the six-cell 110c doubles the capacity from the 28 Watt-hours of our unit, the extra £30 seems pretty trivial considering the benefits it will bring. 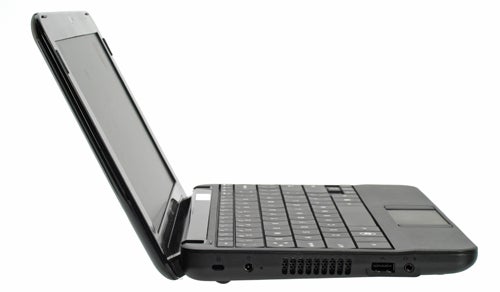 On the audio visual side of things, the 110c is much like most netbooks. While bright and sharp, the display is merely passable where colour production is concerned, while the speakers barely pass muster. As such, a good set of headphones is a must.


Finally, it’s worth noting that Windows XP is the operating system of choice, as has been the case with netbooks for a while now. It’s a shame, however, that HP doesn’t offer its Mobile Internet Experience (MIE) Linux shell as an option in the UK. Of course, you could install this yourself, but it does mean you’re paying for a Windows license you might not want. 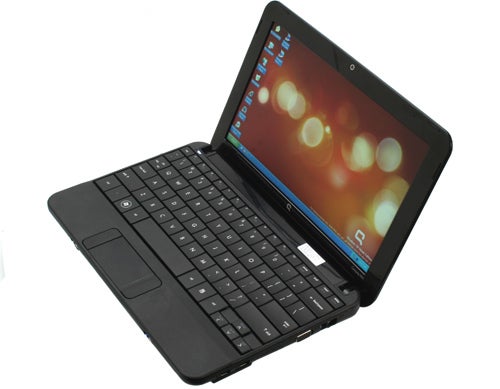 
HP has produced a good netbook in the Compaq Mini 110c, but not a great deal more than that. While its keyboard is among the best around and it’s reasonably priced, it doesn’t offer anything a dozen other netbooks don’t and there are alternatives that offer better battery life for similar money.