Almost exactly a year ago we took a look at the dc7700p, which was the first desktop computer we’d seen with support for Intel’s then new vPro technology. It impressed us with its decent productivity performance, low power usage, quiet operation, and of course its tiny chassis and altogether we deemed it a solid solution for large-scale low-power IT departments. So, one year on, HP has updated this line and we now have the dc7800 ready to take over from its erstwhile sibling. Let’s see how it stacks up.


Built using the same principles as its predecessor, the dc7800p is the ultra slim version of HP’s newest range of 7800 business desktops. It’s available in two configurations, the GV968ET and the GW012EA. The former comes with an Intel Core 2 Duo E6750 running at 2.66GHz, 1GB of 667MHz RAM, a 160GB hard drive, a multi-format rewriteable DVD drive, Microsoft Windows Vista Business Edition, and all the vPro capabilities as standard. This will set you back around £450, which isn’t bad considering the size of the system. However, the best bit is the incredibly comprehensive warranty that HP offers with these systems. As standard you get on-site three years parts and labour cover with next business day response and 24-7 telephone support. Now that’s what I call support!

There are a number of configuration options available so you can increase the amount of RAM or get a faster hard drive. However, HP being HP, the machines are only available off the shelf from retailers and they seldom offer changes to the specification so you’re more than likely to be stuck with the standard configuration. If you want to specify your own configuration you’ll have to order with one of HPs partners, in which case costs will vary greatly depending on specification and numbers. And, as for the GW012EA, this is currently listed as ‘Call to discuss options. Currently may not be available direct from HP.’ but essentially it seems to consist of the same sort of spec with a slower CPU.


Before I move onto the PC itself, I’ll just quickly reiterate what vPro is all about. Essentially, it’s a combination of hardware and software that enables IT departments to remotely manage and troubleshoot PCs in a more sophisticated manner. It also incorporates a robust virtual machine client that greatly enhances security on the client machine. To read more about it, you can refer to our review of the dc7700p, which explains further, or you can visit Intel’s website, here. The key thing to remember is, unless you run a large or very spread out IT department, the benefits are going to be limited and you’d be better off saving some money and going for the none-vPro version.

The first thing you notice about the dc7800p is its tiny chassis. With case dimensions of 255mm x 250mm x 66mm it is among the smallest fully functional PCs you can buy, even surpassing the dc7700p. Indeed it even has VESA screw mountings on the top and bottom so it can be attached to the back of a monitor and hidden away completely. At least that’s the theory. 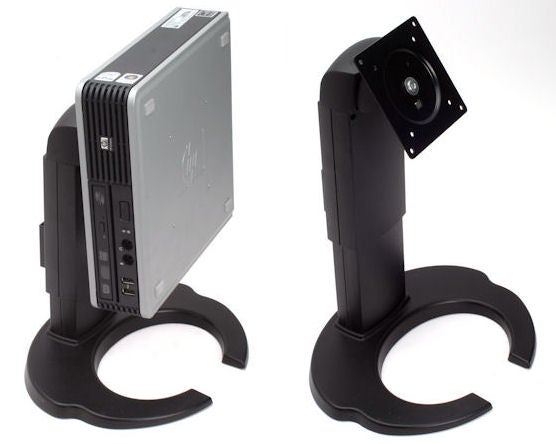 You see, a normal VESA mount consists of a metal plate upon which you can screw a monitor. Creating a PC to sit between the two would require holes to pass right through the PC case, so a bolt can run through the plate and PC then attach to the monitor. With the dc7800p there’s rather a lot of PC in between the two sets of holes so you’d have difficulty passing a bolt through the whole lot. This limits the use of these mounts to attaching the PC to a wall bracket or security cage, which can be discreetly tucked away under a desk or in a cupboard. 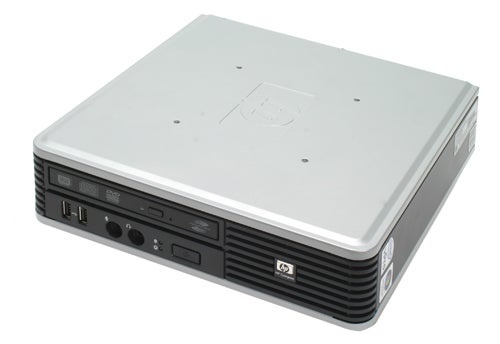 The case itself is built from steel and, due to its compact design, it is very rigid and sturdy. A coating of suitably tough but generic silver paint coats the outer surfaces and a partially perforated black plastic strip runs round the front and sides. Aesthetically it’s an improvement over the previous model and is as much as you would expect from such a system – clean, simple, and dull. Of course the main thing is how well it will stand the test of time, and in that regard it looks to be every bit as good as you could hope.


The front houses a slim-line laptop style DVD drive, which in this case is a multi format rewriter with Lightscribe technology – very useful for labeling those backup discs. These arent’ the most convenient drives to use when a PC is hidden away, as you have to manually pull the tray open, but for the size of case, there’s no alternative.

Under this are a couple of USB ports that have cleverly been spaced apart slightly to enable two over sized USB devices to be used simultaneously. There’s also headphone and microphone jacks, the power button, a couple of LEDs to indicate power and hard drive activity, and an intake for the front ventilation fan. Considering its likely positioning under a desk where wayward feet can swing, the power switch is a little too easy to press for our liking and we’d prefer to see it recessed a little further. However, this is a very minor complaint and it is at least flush with the front.

Both sides are feature free so let’s look straight at the back. Considering the size of the case, connectivity is surprisingly impressive. Six more USB ports and two PS2 ports give as much peripheral connectivity as you could possibly require and having both DVI and VGA video outputs provides plenty of flexibility in monitor choice. Businesses with older equipment may be sorry to see the lack of a parallel or serial port but considering the length of time these connections have been superseded, it’s hardly a surprising move. A 10/100/1000 Ethernet port takes care of network duties and a pair of line-in and line-out jacks look after audio. What you won’t find, though, is a standard three pin power socket and that’s because the dc7800p uses an external power brick which connects via the tiny coaxial socket on the left.

Internally, things are much as you would expect and there’s little room for maneuver. And, although this is to be expected we have seen better layouts with the likes of the NEC PowerMate ML460 Pro in particular springing to mind. That sports a fold out hard drive and CD drive mounts, which makes maintenance very easy. That said it uses a larger chassis and the same may not be achievable within the confines of the dc7800p. 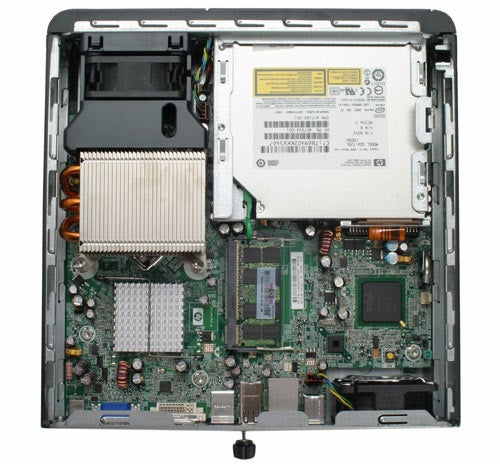 Also as a result of its particularly small internals, HP’s latest ultra slim has dropped the expansion card slot that was present on the dc7700 series. While this may seem like a step backwards it is worth reiterating that the dc7800p is markedly smaller than its outgoing cousin so compromises had to be made somewhere. However, we’re not sure whether the extra space saved on the new chassis is really so important to most people when compared to the greater flexibility provided by the possibility of expansion. Ultimately it comes down on how you plan to use the systems. 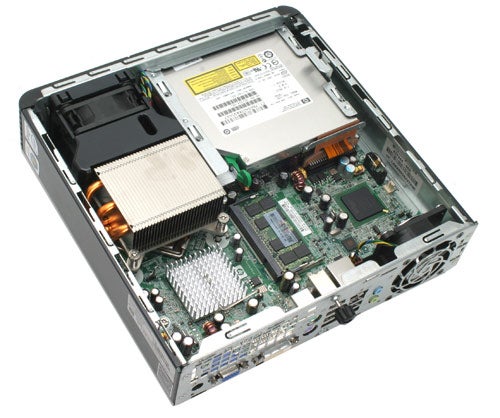 Bar the CPU, all the internal components are of the laptop variety with SO-DIMMs used for RAM, the aforementioned slim CD drive, and a 2.5inch hard drive all in use. Inevitably this affects performance with the slow laptop drive in particular feeling sluggish. The big problem, though, was the onboard graphics that actually struggled to power the Aero graphics of Vista. This should be of little concern to most potential users of the dc7800 as turning Aero off soon makes the system nice and snappy but if your software uses anything more sophisticated than the most basic of 2D interfaces then you may find things slow down again. At least the dual-core CPU keeps everyday productivity ticking over nicely.


With the Compaq dc7800p Ultra Slim Desktop, HP has created a compelling solution for large businesses requiring a small, low-power fully featured PC. If all that’s required is power enough to run productivity programs or a corporate database then this has to be a good bet. If you require anything more, though, you may have to opt for something larger with a bit more grunt.