The purchase price of HP’s new entry-level business colour laser printer, the Color LaserJet 1600, is a smidgeon under £200, but do you pay for this low price with higher running costs? Running costs are usually inversely proportional to purchase price, so with a low-end machine you should expect to pay a bit more for each page than with a higher priced printer.


The look of the new Color LaserJet is quite unusual; there has obviously been some industrial design thought put into it. It sits quite upright but with a gently curved front panel and a completely flat top. Coloured in beige, light and slate grey, the printer has a minimal control panel of just four buttons, two LED indicators and a 16-character LCD display. The display is hard to read, as it’s partly in the shadow of its surround and, our pet gripe, could dearly use a backlight.


The whole of the front panel folds forwards to reveal the toner/drum cartridges and the transfer belt, making it very easy to maintain the machine. At the bottom is a 250-sheet paper tray and a single feed slot for envelopes and other special media. At the back of the right-hand side panel is a single USB 2.0 socket, the printer’s only connection with the outside world, and at the back is the mains socket and power switch.


The printer comes with its four toner cartridges in place, which makes the packaging smaller, but you have to remove them to pull off protective strips from the machine and a tape on each cartridge, before you can use it. No big problem, but a little more involved than with some other printers. 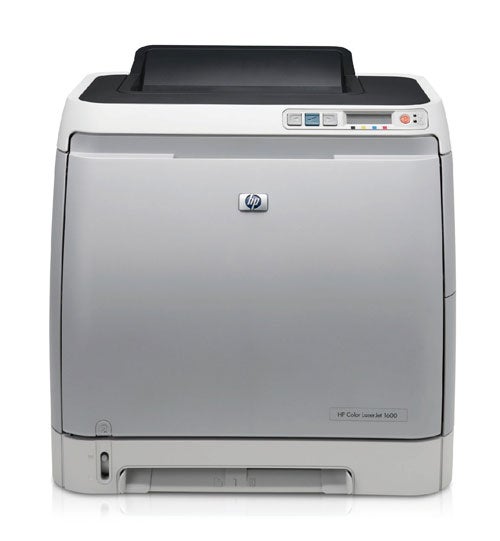 Software comprises a PCL driver and the HP Toolbox software, which is mainly concerned with consumable status. It installs very straightforwardly and in use, the printer just works, which is refreshing in itself.


The driver includes provision for watermarks, multi-page impositions and guidance on manual duplexing; printing on both sides of the paper. This worked well when we tried it, with no mis-feeds printing the second sides.


The Color LaserJet 1600 uses an in-line engine, which means black and colour prints should take pretty much the same time. This is borne out by our test results, where our five-page mono text document took 56 seconds to complete and our five-page colour text and graphics piece took 57 seconds. This gives a print speed of around 5.3ppm, a little way off the 8ppm claimed by HP. Subjectively, print output appears slow, too.

Printed text is crisp and clean, with little sign of splatter or poorly formed characters in its 600dpi output. Colour print is also clean, but there’s a slight fuzziness with black text on coloured backgrounds. This is a little surprising, as the printer uses HP’s much heralded ColorSphere toner, which should offer ‘better flow onto the page’. Colour rendition is fair, though colours still looked too intense in our photo test piece and there was loss of detail in darker areas.


HP claims the printer is particularly quiet and we wouldn’t argue with this, measuring it at a peak of 58dBA and an average below 55dBA. It makes few of the clunks and thumps which many entry-level laser printers, including earlier HP models, produce. 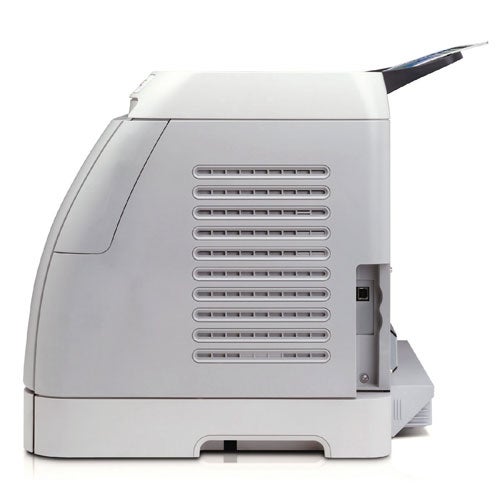 So, to the all important running costs. The Color LaserJet 1600 takes four drum/toner cartridges and HP considers the transfer belt a lifetime component. The cartridges are rated at 2,500 pages for black and 2,000 pages each for cyan, magenta and yellow and cost around £50 each, depending on source. Amazon was the cheapest source we could find.


This gives print costs of 2.49p for a black page and 10.60p for colour. Comparing that with other colour lasers in the same price range, the Color LaserJet comes out higher than either the Canon LaserShot LBP5200 or the Samsung CLP510. In the case of the Samsung, it costs nearly 3p more per colour page. This puts it near the top of the cost bracket for sub-£250 colour lasers. You might expect consumables to drop in price as a printer moves further into its sales life (this is the first UK review of the Color LaserJet 1600), but this printer uses the same consumables as the Color LaserJet 2600, which has already been around for a while.


This is an inexpensive colour laser printer to buy and is easy to maintain and use. It prints quietly and with a minimum of fuss, but colour output is not as natural as with some others and you may need to tweak the software to get the tints you want. It’s also quite costly to run, with page costs at the upper end of the bracket for this class of colour printer. 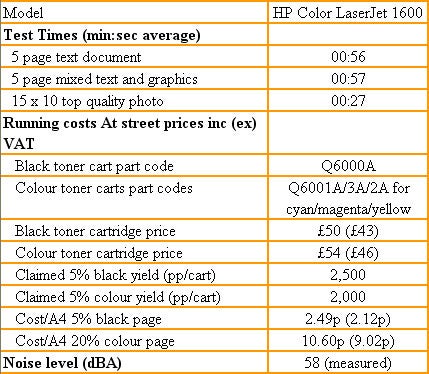