Parents will love this, as it’s light, promises excellent battery performance and has high durability. Reservations are out on the processor speeds though

The HP Chromebook 11A G6 EE is a ruggedised Chromebook that’s aimed primarily at schoolkids – the ‘EE’ is short for ‘Education Edition’ and is nothing to do with the mobile phone network of the same name. While some schools may pick up batches of these at a time, the HP Chromebook 11A G6 EE will be going on general sale from February this year for anyone who wants to buy one. I spent some brief hands-on time with a couple of early units at an HP, Google and AMD press event ahead of the 2019 BETT (British Educational Training and Technology) show.

HP Chromebook 11A G6 EEs will be priced from £299. There’s currently no other pricing information available.

Seeing as storage options are listed as ‘up to’ 32GB, the entry-level model will come with less than this – 16GB or even 8GB. Given that Chrome OS features streamlined access to your Google Drive (which gives you 15GB of cloud storage for free anyway), this might be less of an immediate problem.

HP says that the Chromebook 11A G6 EE is ‘expected’ to go on sale in the UK and the wider EMEA region from February, but availability will likely vary across countries. 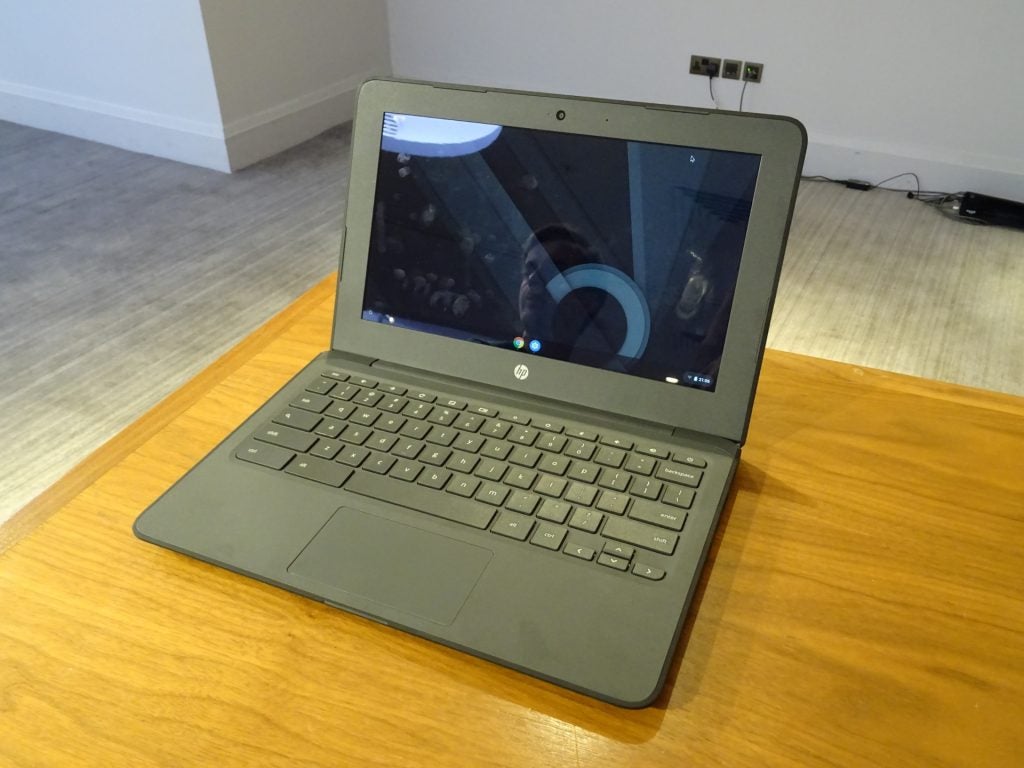 School of hard knocks: HP’s ruggedised 11A G6 EE may be the toughest Chromebook yet.

Unlike most other Chromebooks which are made from flexy and sometimes flimsy-feeling plastic, the Chromebook 11A G6 EE has been toughened to better withstand everyday knocks and shocks. HP says that the Chromebook 11A G6 EE will survive drops on concrete floors from distances of up to 70 cm. The two models I saw came in a regulation grey and a grey with a bright orange trim. HP says that plenty of colour variants will be available from launch, but these are the only two I got to see at the pre-BETT press event.

HP says the Chromebook is also ‘designed’ to pass the MIL-STD-810 U.S. military standard, which the likes of the LG Gram and Samsung Galaxy Tab Active 2 have passed.

I didn’t put this to the test by knocking the models I saw off the tables at the launch event, but they felt a lot sturdier than other Chromebooks I’ve used and reviewed. 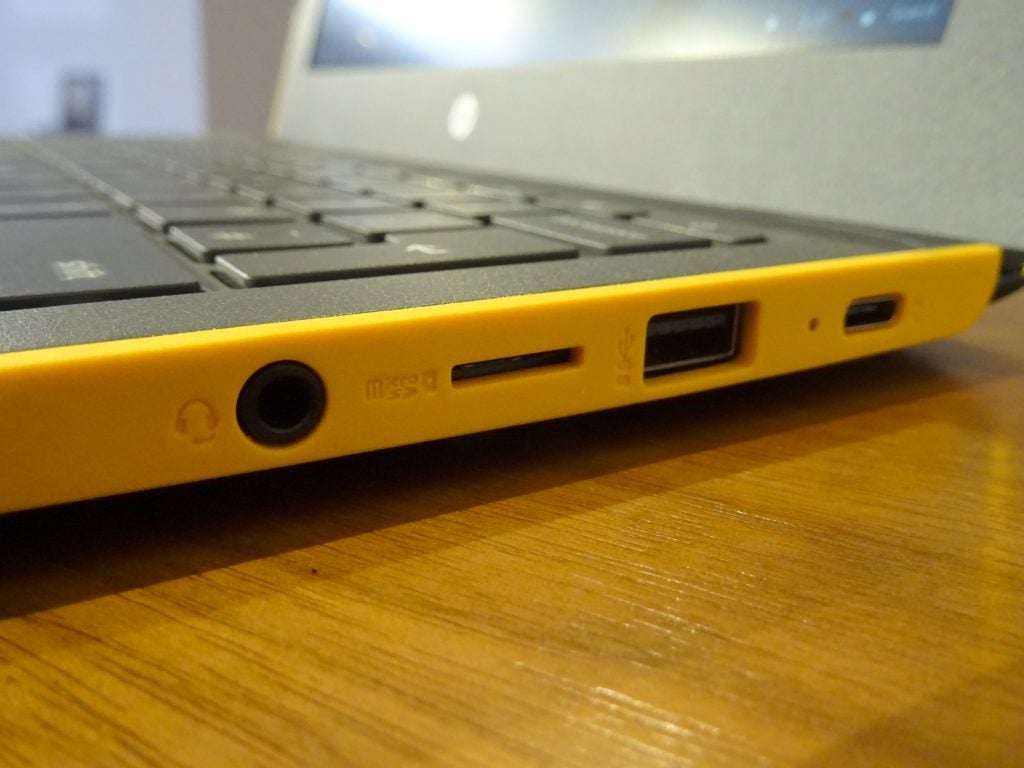 As they’re education-centric laptops, they’re designed to withstand typical classroom wear and tear and at a glance, it feels like they’re tough enough for that. The rubbery strip around the edges gives the Chromebook 11A G6 EE an extra measure of grip, and despite being ruggedised, the units weren’t super-heavy either – 1.28kg, which is fairly typical of Chromebooks in general.

HP says you’ll get an impressive 10 hours of power from the Chromebook 11A G6 EE’s battery, which, I’m inclined to believe, based on prior experience – Google’s Chrome OS has been designed to run quickly on light and undemanding processors, therefore allowing for long-lasting battery performance, even with screen brightness turned all the way up.

The LCD touchscreen displays on the models I saw both has resolutions of 1366×768. HP said that an HD option with IPS (in-plane switching) would be available, which should allow for better viewing angles, so more people can share the same screen. The angles of the non-IPS displays I saw, I have to say, were not fantastic, so hopefully the higher quality screen options won’t be too much more expensive. Nobody at the event was able to confirm if the ‘HD’ option referred to 1280×720 or proper, Full HD (1920×1080). 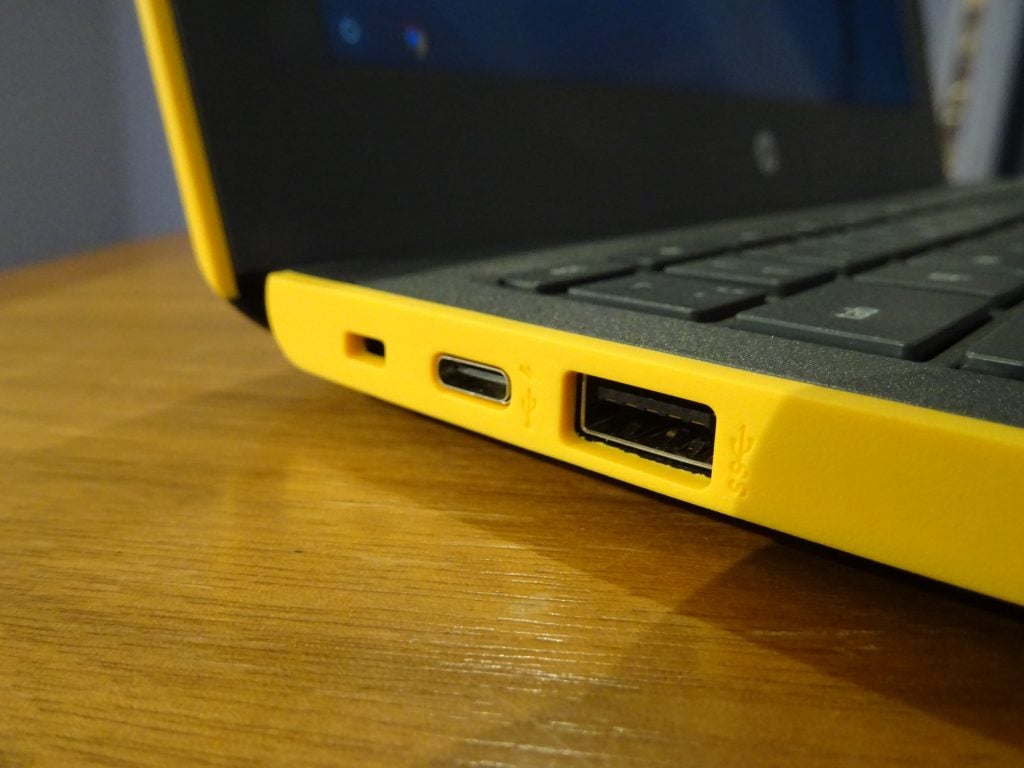 Full specs have not yet been released by HP, but here’s what’s been confirmed so far:

My first impressions of the Chromebook 11A G6 EE are parents are going to love this, as it’s light, promises excellent battery performance, and high durability. The screen size (and relatively low resolution on the cheaper models) isn’t great though, so while this might be ideal for younger students, anyone taking A-Levels will want something bigger and more powerful.