What is the Hostess HW02MA?

The Hostess HW02MA was a surprise entrant into our wine-cooler testing. Compared to the 20-to-40 bottle coolers we’ve tested thus far, it was a bit, well, small. Yet Hostess’ diminutive two-bottle HW02MA promises to bring your wine to the perfect temperature. Whether that’s chilling down a white or warming up a bold red, this nifty gadget can do both tasks at once.

The Hostess effectively and quickly warms or chills wine accurately to the set temperature. It struggled to fit in larger champagne bottles and is a little noisy, but on an ad hoc basis it isn’t a big issue. Overall, the HW02MA is a fabulous gadget and an ideal gift for anyone who savours their vino. 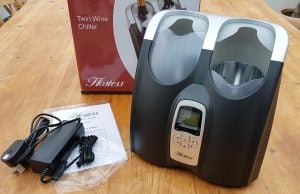 As a two-bottle wine cooler, the Hostess nearly missed our wine chiller testing. Its promise of being able to cool or warm wine was intriguing, though. The ability to do both at the same time was more appealing still. 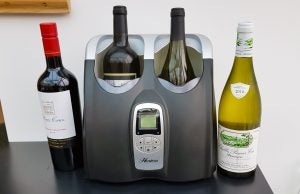 Presented very nicely in a full-colour box, the HW02MA is weighty and robust. It’s designed to sit on the kitchen worktop in use and is attractive enough to stay put between jobs. The matte-grey casing and silver trim look the part and the comprehensive LCD screen ices the visual cake. It comes with an in-line power supply and dedicated input on the back. We love a gadget, and so far the Hostess was ticking all the right boxes. 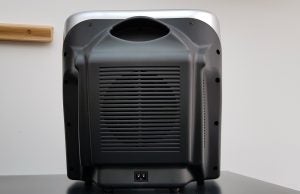 Translucent plastic shields pull down at the front of both wine receptacles to afford easy entry for your bottles. Inside each is a curved metal heat transfer plate and a spring-clip. The latter keeps most regular sized bottles in firm contact with the plate. 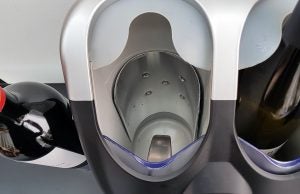 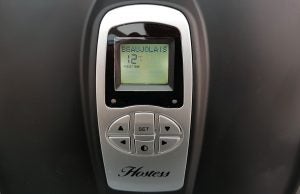 Looking at it another way, you can scroll through the list of wines to match your poison and let the Hostess take it to the perfect drinking temperature. The red list covers the likes of Beaujolais, Bordeaux, Cabernet, Chianti, Merlot, Pinot Noir, Rioja, Port and even Rose. The white list includes Valpolicella, Chablis, Chardonnay, Chenin Blanc, Pinot and Muscadet. The champagne selection also covers sparkling wine and, our fave, Asti Spumante.

You press start to get that side going, then repeat the procedure completely independently on the other side. It will chill or warm one or two bottles as required. 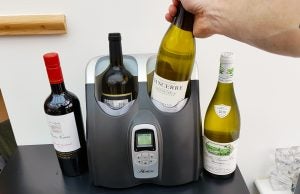 Now, one could argue that leaving your reds in a warm room or dropping the Chablis in the freezer will achieve the same thing. True. Yet, as anyone who has ever opened the freezer door in the morning to find a smashed bottle and frozen wine all over their peas will testify, that plan has issues. Jackie and I have a whole wardrobe full of those T-shirts. 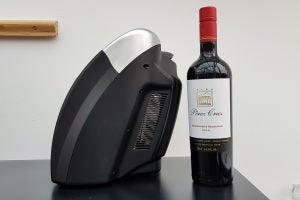 The HW02MA uses a thermo-electric heat exchanger with some quite potent fans to assist heat transfer. As such, it isn’t quiet. We measured around 47-48dB at 1-metre away, or about the same as a room fan. That’s noticeable in a quiet kitchen.

Then again, this isn’t a device that you’ll have on all the time. It’s only going to make the noise while it’s doing its stuff. Chances are, the fans might be drowned out by the sounds of a dinner party in the background. We had several dinner parties to test the Hostess and proved the point. 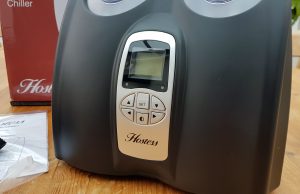 The Hostess HW02MA takes one or two bottles, white or red, or both the same. The specification suggests up to 90mm diameter champagne-sized bottles will fit. We had a bit of an issue with that.

Typical Bordeaux-sized bottles 77mm in diameter slot in and out with ease. Larger bottles from a lot of the French white regions at 82mm diameter are also fine. Champagne and Prosecco bottles upwards of 88mm round are a bit of a squeeze. 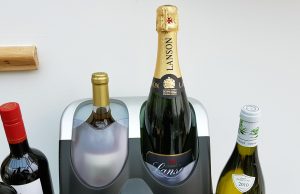 Our Moet bottle at 87mm diameter just about went in, but only with a bit of ‘brut’ force. A fairly strong arm was required to push the bottle home and remove it again afterwards. We thought the spring clip might scuff the label, yet its rounded design didn’t seem to do any damage – even when the bottle was rammed in tightly. The same was true of our local fizz, Chapel Down, which went in with a shove. 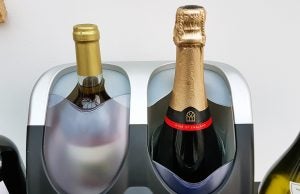 Problems came with bottles of 88mm diameter and over. Enter the Lanson Black Label. It was a super-snug fit, and we didn’t want to force the bottle into the machine. We suspect the plates and spring clip will loosen off over time and eventually accept these larger bottles. Only time and a lot of wine will tell.

I decided to call Hostess customer service regarding the issue instead. Posing as a regular customer, the company took my number and their HW02MA expert, complete with unit to hand, came back to us the same day. He agreed champagne was tight, but said the metal spring will flex out of the way if you push firmly. Fair enough, and top-notch customer service too. 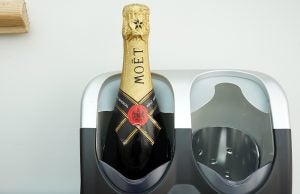 Where we did have a proper impasse was with uniquely shaped bottles, such as our Floralba Prosecco. The tapering bottle did fit into the Hostess, but the odd shape pushed the bottle away from the heat transfer plate. As such, not a lot happened. 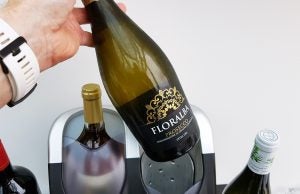 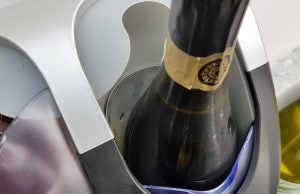 We love it when an appliance performs well above expectations, and the Hostess really impressed. Our first test was a real challenge. Heating one bottle from a typical 13ºC cellar temperature to 18ºC whilst simultaneously cooling a white wine from the cellar down to 8ºC. We placed temperature probes in the wine, in the centre of the bottle, to ensure we were accurately measuring the actual wine temperature. 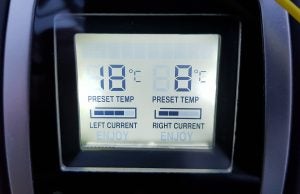 The Hostess got to work very quickly. Within the first 10 minutes both bottles had moved a degree in the right direction. That speedy performance continued – and just over 50 minutes later, the red wine side beeped at 18ºC. 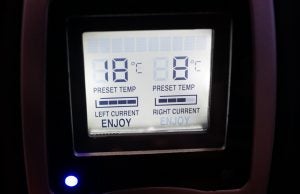 A couple of minutes later, the white side followed suit. It measured spot-on 8ºC in the heart of the wine bottle. By achieving both temperatures, accurately and near-simultaneously, in under an hour was mighty impressive. 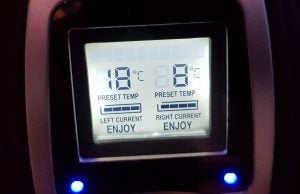 The next day, test two used the empty bottles refilled with warm room-temperature water. Set up in the Hostess, the liquid in both bottles measured 21ºC. We set both sides to Asti Spumante at a chilly 5ºC, and left the Hostess to do its thing. 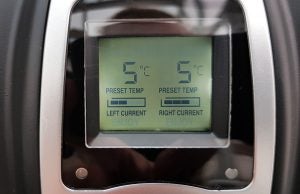 In the first hour both bottles had got down to an impressive 11ºC. The first beep to announce success was at 1hr 40mins. The other side followed suit shortly after. Measured temperature was about 6ºC both sides. Within another five minutes the wine temperature was down to 5.4ºC as the chilled bottles continued to cool the contents.

The Hostess impressed us with its speed in warming and cooling wine simultaneously. Yet it’s even swifter set to the same task both sides. Chilling two bottles of wine from 21ºC to a chilly 5.5ºC in under two hours is ideal. 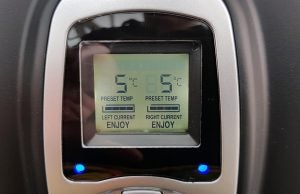 Hostess HW02MA – How much will it cost to run?

The HW02MA draws a fairly hefty 40watts per side. If the Hostess was running all the time then it would draw about as much electricity over the year as a large US-style fridge freezer. Ouch.

But it isn’t, of course. This is a gadget that has to do ad hoc tasks in the name of the perfect wine drinking temperature. Over the course of our first test, with both sides running in opposite directions, it used 0.06kWh. At 15p/kWh, that’s the princely sum of not quite a whole penny. To achieve perfect temperature Bordeaux one side and Rioja the other, we think that’s an absolute bargain. 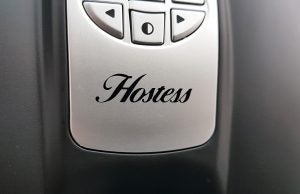 Why buy the Hostess HW02MA?

From nearly not being reviewed to becoming our must-have kitchen gadget of the moment, the Hostess HW02MA really impresses. Its ability to simultaneously chill and warm wines, achieving accurate temperatures in super-quick times is ideal, and its running costs are negligible. It looks good on the kitchen worktop and the LCD panel adds a touch of techy-class. Even the glossy packaging shouts ideal gift purchase for the wine connoisseur.

It’s a bit noisy in use, and not all larger or awkwardly shaped bottles are going to fit, but overall the Hostess HW02MA warms and chills wine with style, accuracy and speed.

An effective, stylish kitchen gadget that delivers on its promise to quickly warm or cool your wines to the correct drinking temperature.