Thanks to the clever battery back, the Honda HHB 36 AXB leaf blower distributes its weight, leaving you with a light and manoeuvrable body for clearing garden debris. With a tremendously powerful motor, this blower can compete with petrol models, only there’s no smell and it’s quieter. The HHB 36 AXB isn’t cheap, but if you need something powerful and fast for clearing a large area, this leaf blower is an excellent choice.

If you have a sizeable garden, or one with a lot of trees that shed leaves, then the Honda HHB 364 XB could well be for you. This is an absolute beast of a leaf blower, producing a strong gust of air that’s capable of shifting pretty much anything.

It’s neatly designed, too. A battery belt takes away the strain off carrying the unit, and makes it easier to change batteries. A slightly more angled handle would help, to naturally point the blower downwards – but that aside, this is a top high-end leaf blower for those that need it.

Packing the power of a petrol blower into a cordless model usually means packing in the weight, but the Honda HHB 36 AXB has a neat trick: it ships with a battery belt. This clips easily around the waist, with the battery sliding into the slot on the belt, and the connector going into the HHB 36 AXB’s body. 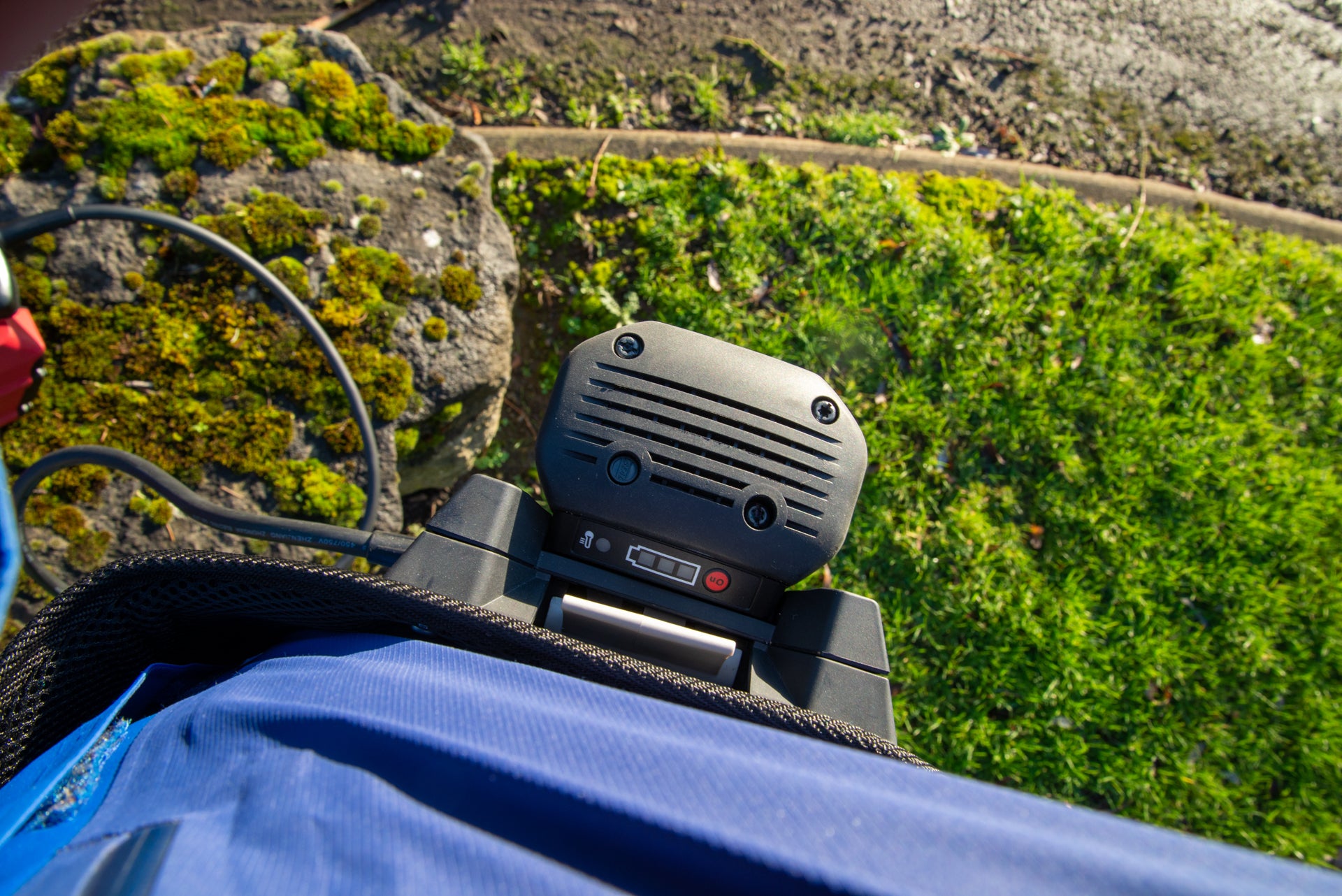 It dramatically cuts the weight down. Altogether, the entire kit with a 6Ah battery weighs a chunky 5.46kg; without the battery, the body weighs a more svelte 3.28kg. It’s a noticeable difference, and I found the HHB 3X AXB as easy to carry around as more budget models aimed at smaller gardens.

A single trigger sits on top, towards the front of the grip. There’s a slight chance of accidental activation while carrying, although the trigger is well placed and it is, in practice, hard to knock it accidentally when simply carrying the blower. 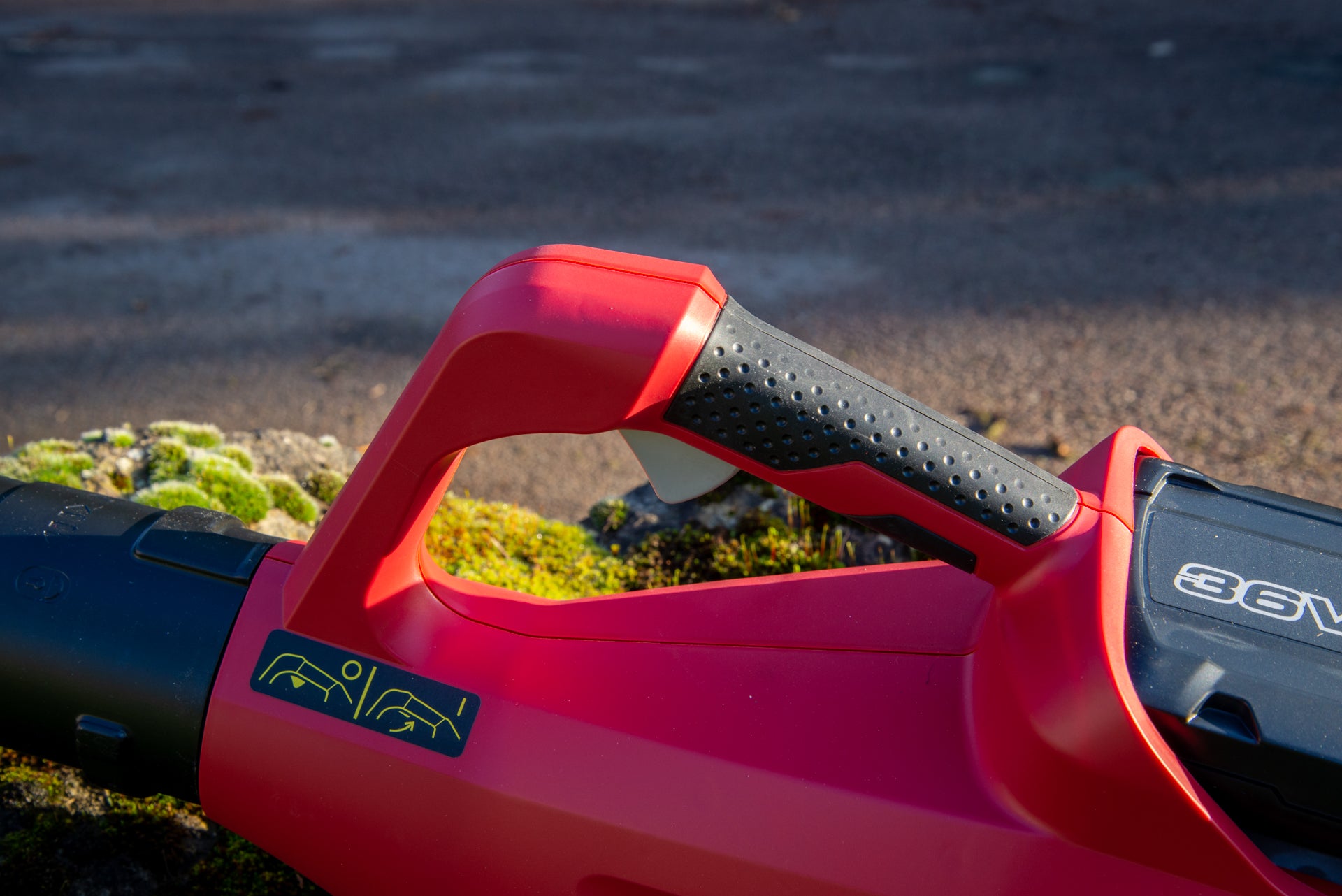 My only minor complaint about this model is that the handle makes you hold the blower flat, rather than pointing slightly downwards. So, in order to clear leaves, you have to tilt the leaf blower towards the ground, which is a little tiring. Thankfully, since there’s no battery in the back, you’re only pushing down against a fraction of the total weight.

The single trigger is an analogue one, letting you control engine speed from a mild blow to a full-on hurricane. This kind of variable control is brilliant, allowing the user to adjust speed and power based on the situation to get a neat pile of leaves at the end, without the risk of accidentally blowing everything everywhere.

Honda provides two nozzles in the box: a standard round one and a square flat one for more concentrated power. There’s no length adjustment and both nozzles give a total length of 960mm, which is about right for most people. 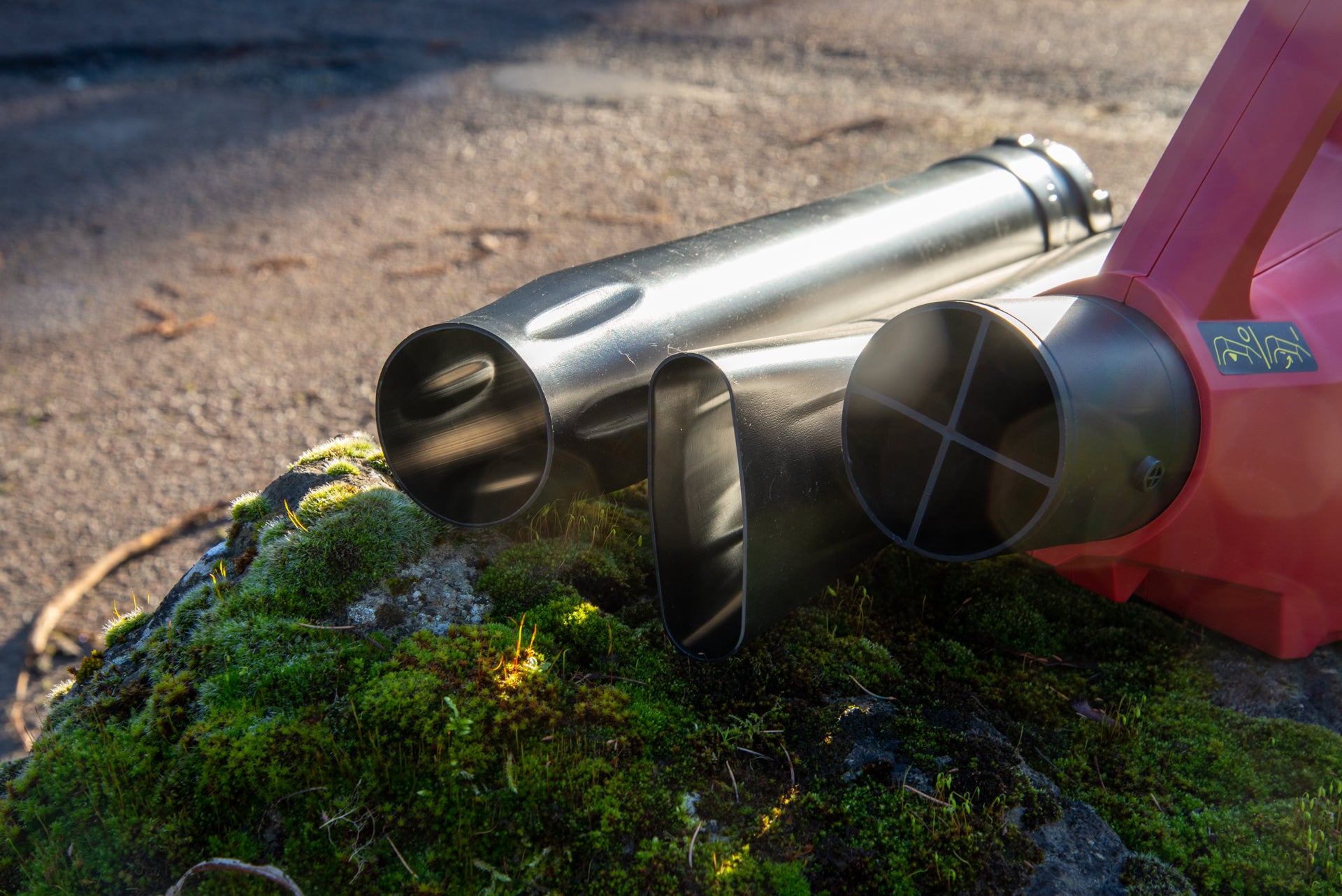 On full power, the Honda HHB 36 AXB is super-powerful. With the trigger taped in to record airspeed on an anemometer, the leaf blower slowly started moving backwards and pushed my backpack around on the floor.

It’s so powerful, that this blower easily overwhelmed my anemometer at close range. Based on Honda’s figures, the HHB 36 AXB has a maximum airspeed of 66m/s. With the nozzle diameter of 6.6cm, this gives a total airflow of 812.87m3/h. 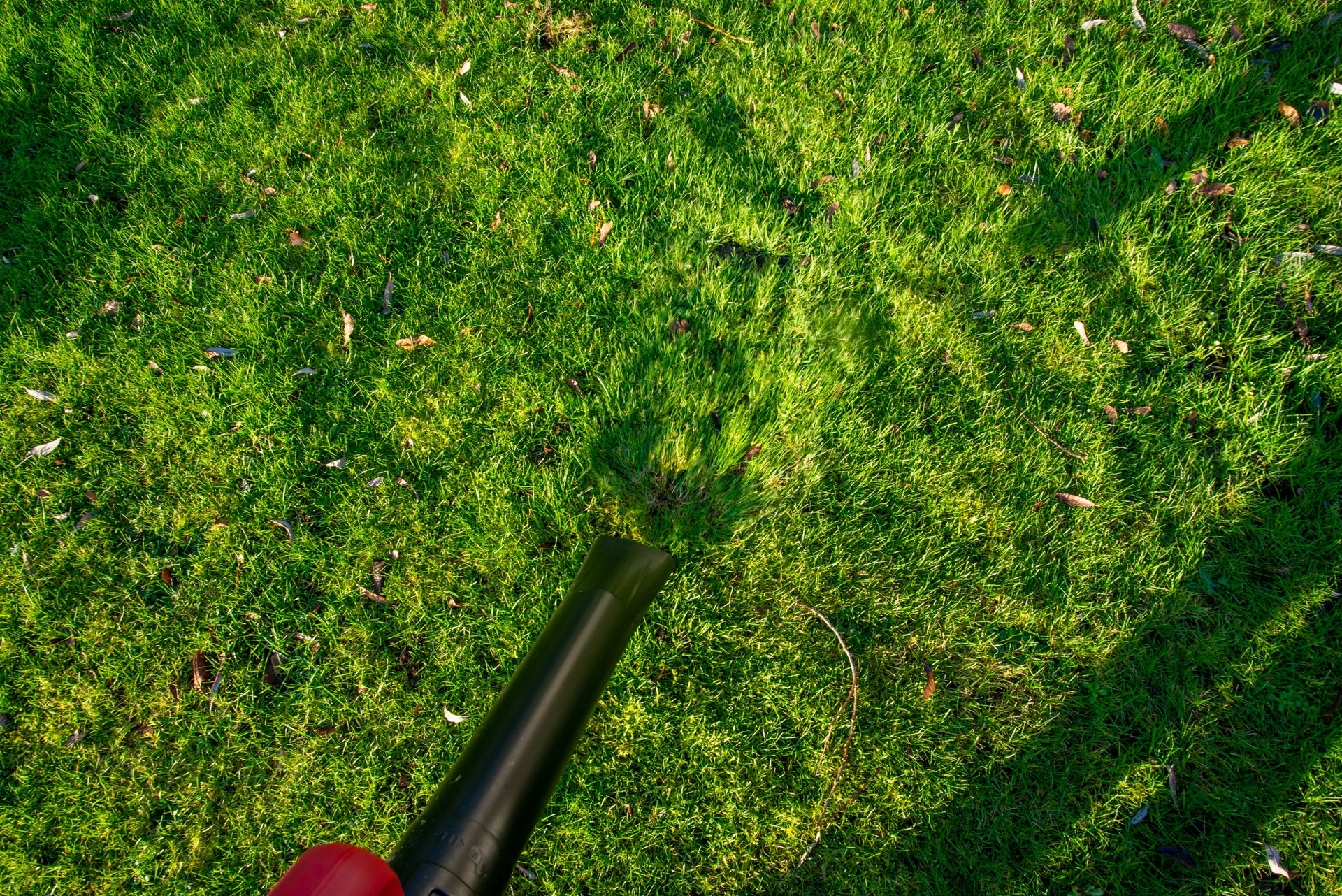 This is important: it’s possible for smaller blowers to have fast airspeeds, but smaller nozzles means that leaves are hit with only a small burst of air. The large nozzle and high speed here means that you get a wall of air hitting leaves. Even from a metre away, I measured air at 21.2m/s – that’s faster than the Karcher LBL 2 at the nozzle.

Yet, the 36 AXB can be gentle, too. On minimum speed, I measured it at 19.5m/s, for an airflow of 240m3/h. Here’s where the large nozzle makes a difference: the Karcher LBL 2 has faster airspeed but its smaller nozzle means less airflow of 126m3/h.

The power on offer means that you can push bigger bits of debris around with ease, including larger twigs. And, if you have a curb to push leaves over, then this leaf blower will make short work of them. 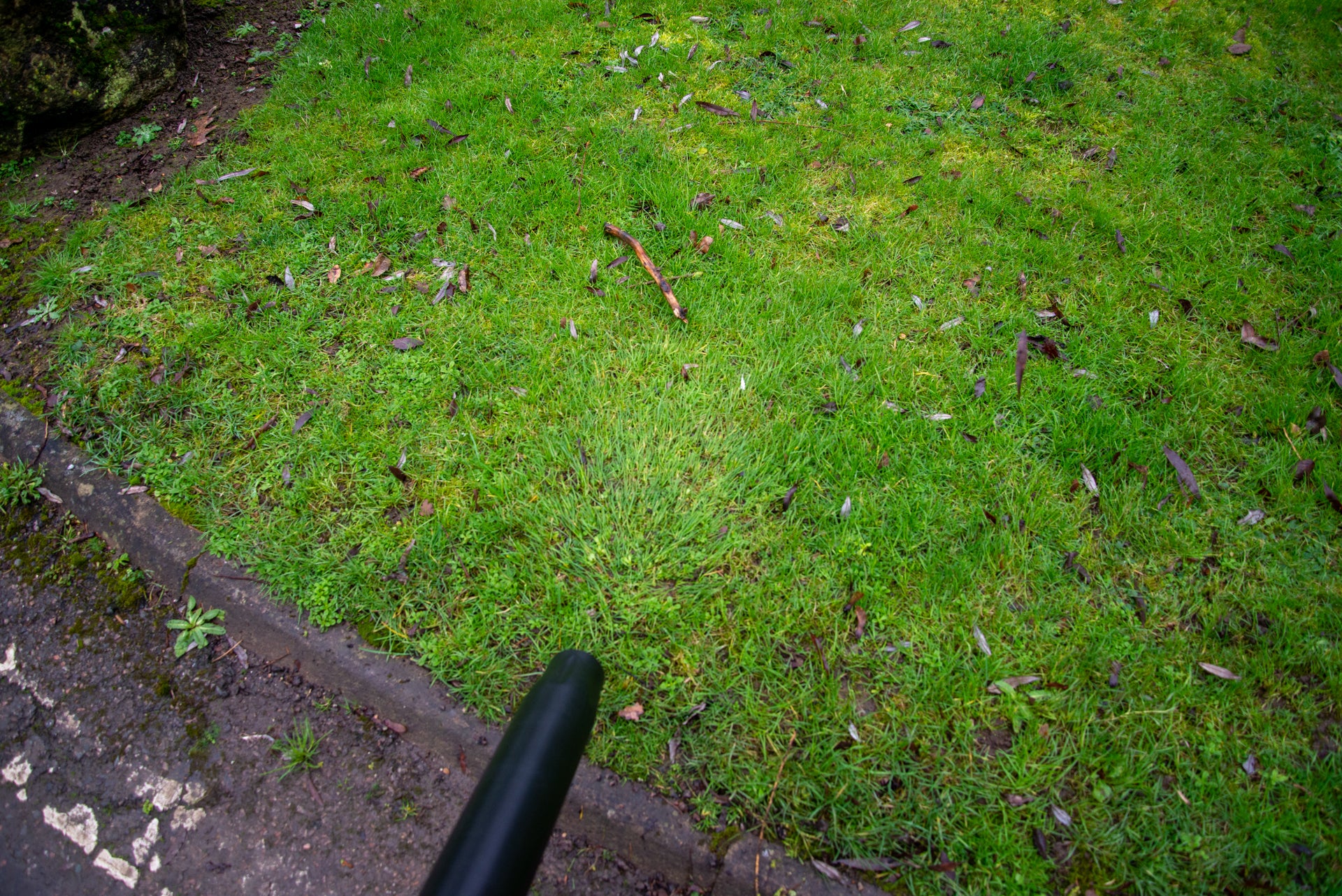 To test out the blower, I took it outside to tackle the patch of garden. First, I started with some leaves that were mostly sat on the top of the grass. These leaves were damp, so heavier and harder to move than dry ones. A few seconds’ burst easily cleared a patch a couple of square metres wide. 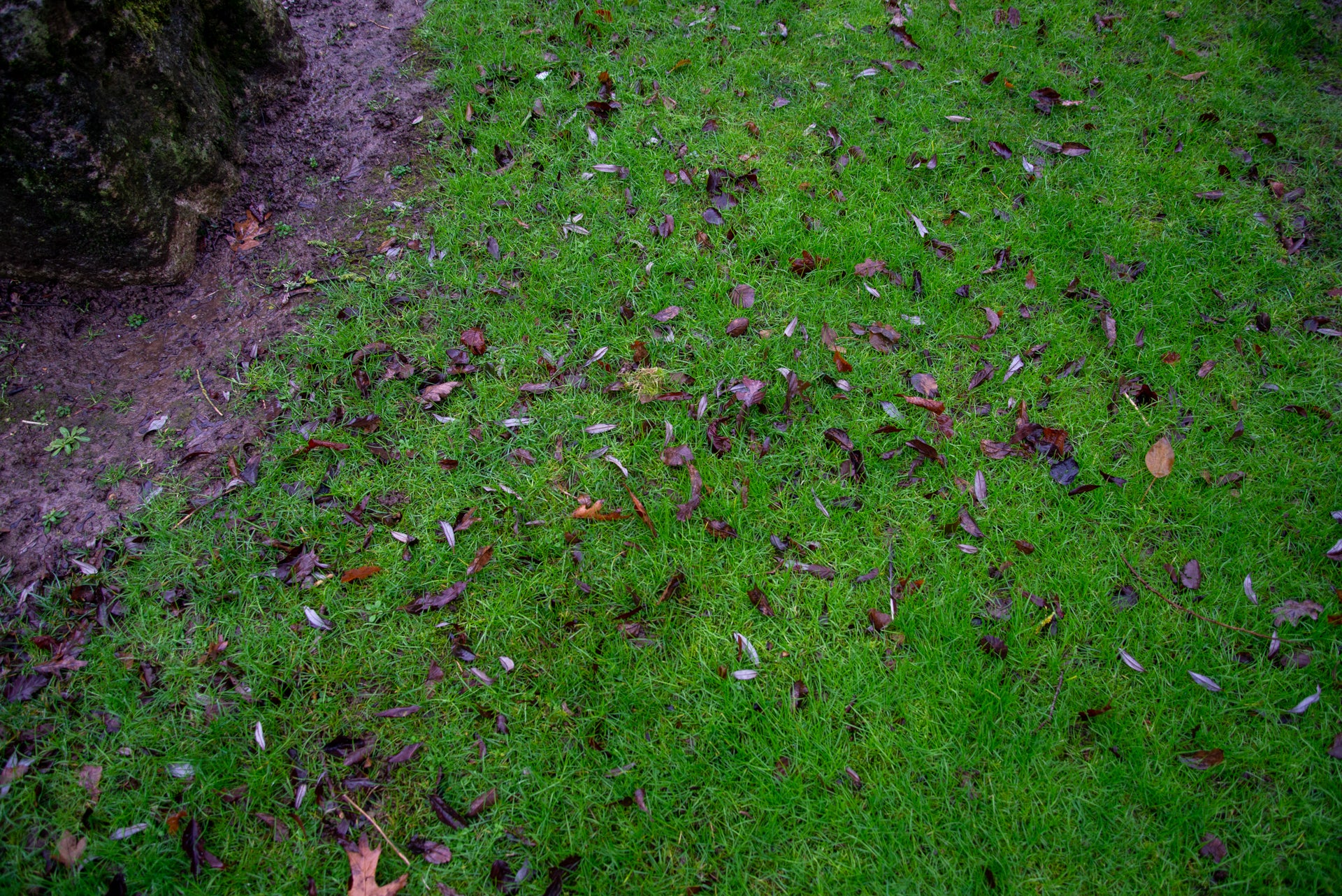 For a tougher challenge, I tackled an area of grass where many of the leaves had become entangled in the grass blades. Again, the power on offer made cleaning the area really easy. I had to adjust the angle of the blower to loosen all the leaves, and there was just the occasional leaf that stubbornly refused to move at all, flapping in the air stream but clearly too trapped to move. 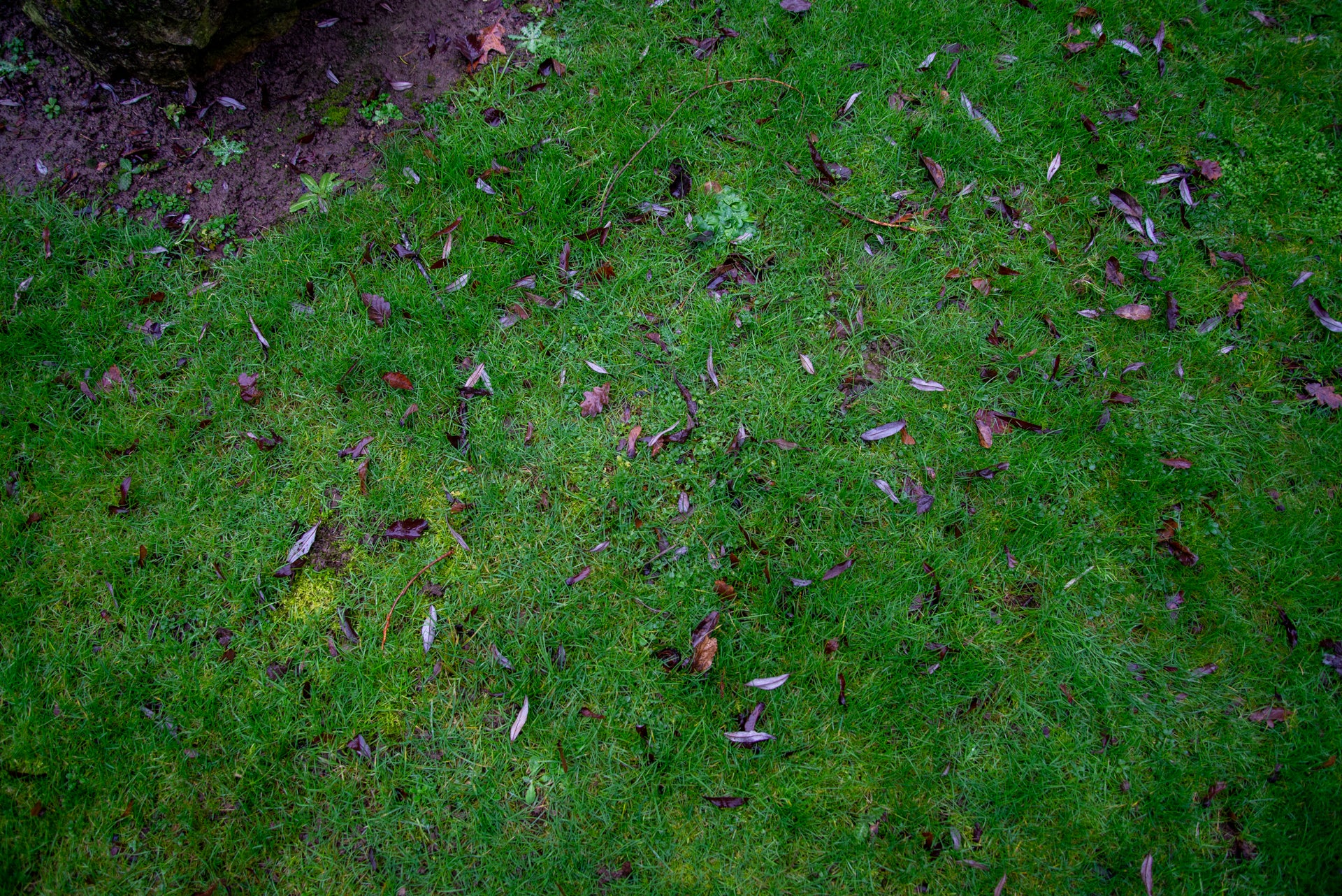 It’s an impressive performance. Yet, I should mention how gentle the blower can be, and once you get onto a hard area, being able to dial down the power makes it easier to collect leaves into a pile for easy removal.

Thanks to the air flow, the 18-minute runtime from the 6Ah battery was more than enough to clear the garden, and you can do more work with this blower than a lower-power blower with longer runtime.

Should you buy the Honda HHB 36 AXB?

If you’ve got a lot of leaves to deal with, or a large garden (or a mixture of both), then you’ll need the power and performance that the Honda HHB 36 AXB can deliver. Those with a smaller garden can probably drop down to a slightly cheaper blower, such as the Stihl BGA 57, or check out our best leaf blower guide.

What I can say is that for places that need the power that this leaf blower delivers, it’s an excellent and well-constructed tool. In particular, the clever battery belt means that the main part that you carry is comparatively light, so makes longer jobs easier, even if the handle does require you to angle the blower down. And, it’s nice to see both nozzle types provided in the box, giving you everything you need in one package. For larger gardens or bigger leaf piles, this is money well spent.