While Hitachi’s UT42MX70 might not be the first of the new generation of ‘mega thin’ flat-panel TVs through our doors, it’s definitely the thinnest. It’s just 35mm deep across its entire rear end, compared with the 90-110mm depths found on normal flat – now to be known as fat – TVs.


Regular readers may remember our review of JVC’s 42DS9 – the very first really thin LCD TV with a bezel only 34mm deep – a whole 1mm less than the UT42MX70. But actually, while the JVC’s depth really was marginally thinner than that of the new Hitachi over around two-thirds of its body, there was a rather significant section in the 42DS9’s middle where the girth suddenly expanded to a relatively hefty 74mm. The UT42MX70, however, has no such ‘spare tyre’ to worry about, allowing it to generate an achingly gorgeous, almost ethereal impact as you walk around it. 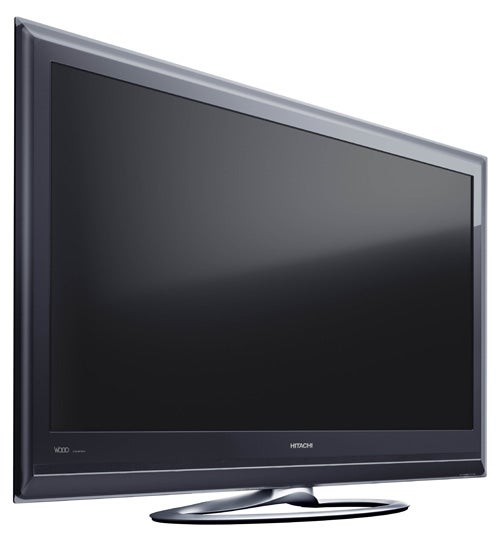 The groundbreaking skinniness of the UT42MX70 has been achieved with the help of a cluster of key technological innovations. For starters, the LCD layers in the screen have been made more compact. Also various components have been replaced by chipsets, the power supply unit has been reduced to barely a third of the size of normal flat TV power supplies, and the ventilation system has been completely redesigned to improve heat dissipation and improve air-flow.


There’s one other rather important reason why the UT42MX70 can be so slim – it doesn’t have a tuner. If you’re surprised by this, you really shouldn’t be. For the fact is that tuners are remarkably bulky things – indeed, it was the tuner that forced JVC’s 42DS9 to jut out more over its central third.

Obviously, though, not having a tuner makes the UT42MX70 a slightly complex proposition for your average TV buyer. For, starters, if you want to get pictures into the screen, you’re going to have to depend on an external video source, such as a Sky HD or Freesat receiver.


This isn’t too troublesome, I guess, but adding a further layer of complication is the rather surprising fact that the UT42MX70 only has a single HDMI socket for video duties. Yikes.


On reflection, however, this apparent dearth of video connections isn’t quite as crazy as it initially sounds, for two reasons. First, a TV so outrageously minimal really doesn’t want to have its sultry good looks spoiled by spools of cables hanging out of its bum.


Second, being able to make do with just a single cable running between your sources and the screen is a much more likely scenario for the AV installation market Hitachi openly admits it’s targeting with the UT42MX70. After all, if the screens are merely the video centrepieces of wider AV systems, it’s very likely that their owners will be able to ‘route’ video sources through, say, an external HDMI switchbox or an AV receiver.

If this is all starting to sound a wee bit complicated to you, then you may be interested to note that later in the year – probably around October – a separate multimedia box will be launched for the TVs containing a tuner and all manner of AV inputs. You’ll just sit this box in a cupboard somewhere away from the screen, using it to switch what you’re watching, while a single HDMI cable runs from the multimedia box to the screen. This optional box will remove the necessity to build a wider installation around the TV.


While we’re talking about options for the UT42MX70, we should add too that the set will likely also be purchasable in a selection of colours (probably blue, black and white), and can be perched atop an optional (£140) floorstand. 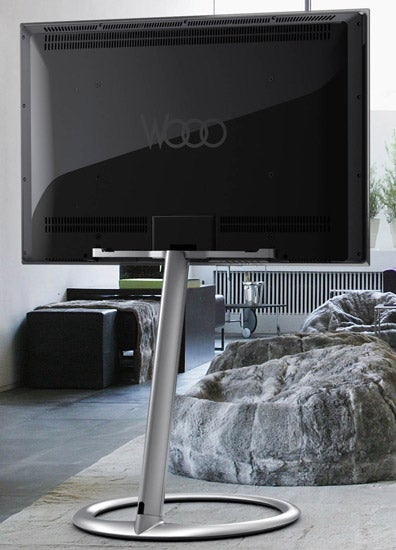 As you might hope of a 42in TV costing the not inconsiderable sum of two grand, the UT42MX70 does not rely merely on its groundbreaking girth to justify its expense. It’s also stuffed to the gunnels with fancy features. These are actually too numerous to cover in full without boring the pants off you all, but there are one or two highlights we really must get into.

More processing cleverness comes from a 100Hz engine to improve motion sharpness, while the strangely basic-looking onscreen menus include a very helpful series of themed image presets; extremely fine adjustments of the backlight output; the option to manually adjust the TV to accept Deep Colour (if you can find a source!); MPEG, cross colour and standard noise reduction options; a game mode that reduces the screen’s response time; multiple adjustments to the TV’s 3D Comb Filter; and a film mode that adjusts the set’s progressive scanning to suit your sources – including 1080p/24 from Blu-ray discs.


There are also a couple of audio features of note, namely a pseudo surround mode and a Clear Voice processor that brings out the dialogue more if you’re struggling to hear it in the mix. It’s important that you realise, though, that no speakers are included with the UT42MX70 as standard.

Before checking out the UT42MX70’s picture performance, it’s probably worth pausing for a moment to reflect on the whole concept of ultra-thin TVs. For while Hitachi’s marketing for this screen might make a big play of the fact that it’s a ‘360 degree’ TV that looks equally resplendent from any angle, it’s a plain fact that most people just push their TV back to a wall and sit right in front of it, meaning that any extra slenderness gets completely lost.


But somehow I have a sneaky feeling that such prosaic thinking probably isn’t going to affect the UT42MX70 too badly. After all, who cares about mere practicalities when you’re talking about a genuinely revolutionary design that will have your friends’ eyes bulging with techno-envy?! 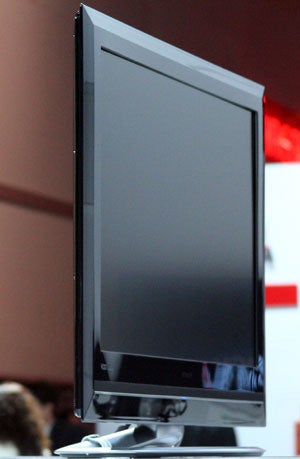 And of course, if your TV does somehow occupy a position in your room where it will be seen from an angle – as people walk in, for instance – then this screen’s 360-degree glories really might come into play.


What’s really, really important about the UT42MX70’s slenderness from our point of view, though, is that it doesn’t appear to have negatively impacted the screen’s picture quality. In fact, for my money the screen delivers not only Hitachi’s best LCD picture quality yet, but some of the best pictures we’ve seen from any LCD TV, period.


Particularly stunning is the remarkable sharpness on show. During HD coverage of the Nadal/Schuttler Wimbledon tennis semi-final, for instance, the clarity with which the UT42MX70 renders such minute picture detail as the cross-hatch pattern of the net, the roughness of the worn patches around the bass line, the faces of the crowd and even the weave in the players’ clothes is really something to behold.

Even better, this stunning clarity holds up extremely well when Nadal starts scurrying around the court and slamming ground shots back at his opponent at more than 100mph. In fact, motion on the UT42MX70 is so free of LCD’s traditional blurring and resolution-loss problems that more than once I had to double check that the screen wasn’t actually using plasma technology.


This is a terrific achievement on Hitachi’s part that I can only put down to a combination of the Picture Master processing, the 100Hz engine, and the screen’s use of the latest generation of Hitachi’s In-Plane Switching (IPS) technology, with its faster response times.

While it’s the UT42MX70’s HD clarity that inevitably delivers the greatest impact, though, the screen also deserves major plaudits for the quality of its standard definition pictures. The screen is, of course, a Full HD affair, yet it upscales standard definition sources to 1,920 x 1,080 pixels without adding anywhere near as much video noise and softness as we’re accustomed to seeing on Full HD screens.


There’s seemingly no video noise of any sort visible with HD sources either – unless, that is, it’s there in the source. And even source noise can be tackled with impressive finesse by the judicious application of the screen’s various noise reduction circuits. 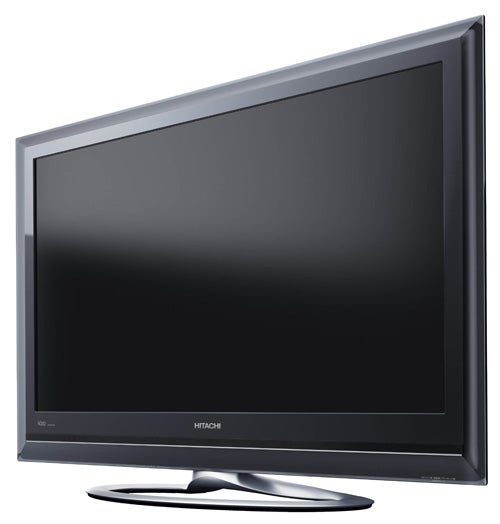 Another area where the UT42MX70 achieves genuine benchmark status is with its colour response. The slightly orange bias of many previous Hitachi screens has been completely abolished, leaving in its place a dizzying array of colours that are 100% believable 100% of the time. Even skin tones during dark scenes like the various on-stage performances in ”The Prestige” always look just right. And to make things even better, the Full HD resolution and Picture Master processing get together to completely remove any trace of blockiness or striping in colour blends.


The net result of all the strengths we’ve just described is a picture that looks so pure and natural for the vast majority of the time that you actually forget you’re watching a TV, instead just becoming engrossed in the subject matter of the programme being shown. And if that isn’t the very definition of what you want from a premium TV, I don’t know what is. 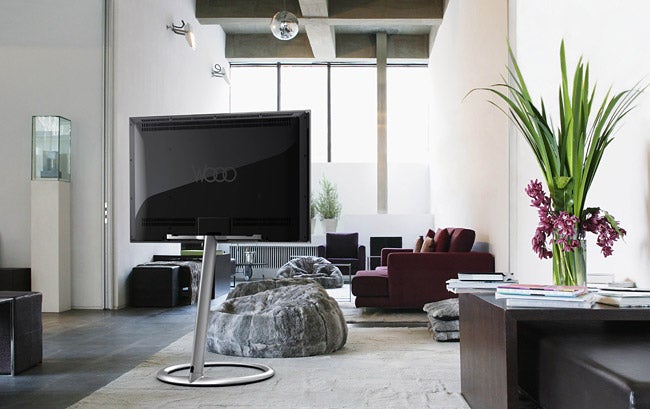 Moany old sod that I am, though, I did manage to find one aspect of the UT42MX70’s pictures where there’s room for improvement: black levels. For while dark scenes on the UT42MX70 actually look good by general LCD standards, there’s a mite more greyness in areas that should be black than I’ve seen on, say, the latest big-screen Samsung LCD sets. And of course, the greyness is considerably greater than on Panasonic or especially Pioneer’s latest plasma screens. But even in this area of supposed ‘weakness’ the UT42MX70 can still produce a positive, in the form of much more shadow detail subtlety than most LCDs can muster.


I have to say that I still retain a healthy scepticism about the real importance of the present ‘skinny TV’ infatuation – especially when that infatuation leads to the practical problems (no tuner, hardly any connections) that will have to be faced by a current UT42MX70 buyer.


But so sublime is this Hitachi’s design and, best of all, so impressive are its pictures that I have to admit that for once it’s managed to batter my innate cynicism into a bloody, defeated pulp.