We’ve never done a review of a single hard disk before but this Hitachi drive justifies the attention. It’s the first 500GB disk drive to hit the shelves. That’s half a Terabyte in a single drive. Blimey! Hitachi has got its drive to market ahead of the likes of Maxtor and Seagate who have announced drives but not yet shipped them. 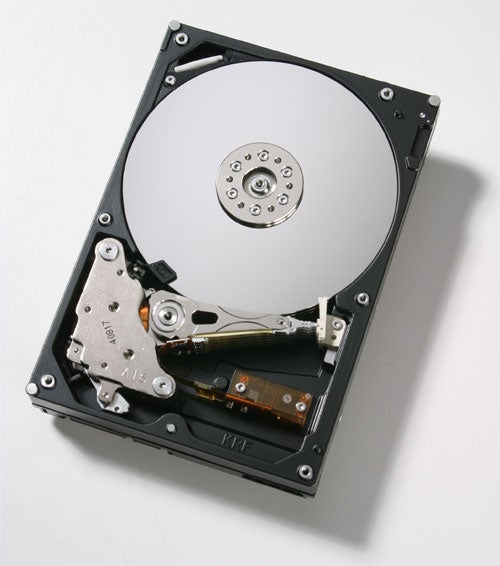 Hitachi hasn’t been very subtle in the method that it’s used to achieve the landmark figure but instead has ganged up five platters and ten heads to achieve the 500GB, which tells us that each platter has a 100GB capacity. That’s a surprisingly low areal density when you consider that Samsung’s new SP2504C gets its 250GB capacity from a two platter/four head design. Hitachi has form in this respect as it released the five-platter 75GXP back in the days when it sold hard drives under the IBM brand and more recently it also used five platters in the 400GB 7K400. 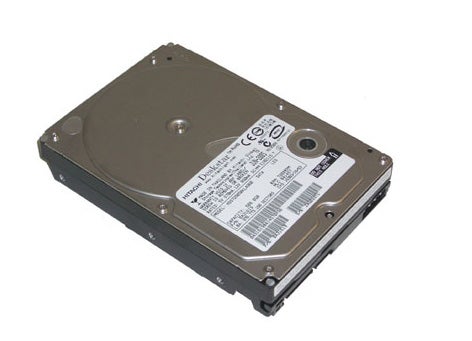 The result is a drive that looks very conventional from the outside. Should you be interested in such minutiae it weighs in at 692g, compared to 618g for the Samsung SP2504C. Hitachi has released the 7K500 in both SATA and PATA forms and, as you would expect, the two drives are fundamentally similar. They both have a rotational speed of 7,200rpm but the PATA drive has 8MB of cache compared to 16MB for the SATA model, and nominally the SATA drive has a much faster interface as it’s SATA-II and rated at 3GB/sec compared to ATA133. We can argue about the figures all day long but we all know that a single drive doesn’t stress a 100MB/second interface so the benefit over ATA133 is merely theoretical. The business of switching to a GB/second rating (bits instead of bytes) for SATA is frankly annoying as there are eight bits in a byte yet every manufacturer is using a multiple of ten so 150MB/second became 1.5GB/second instead of 1.2GB/second.

The 7K500 is Hitachi’s first SATA-II design and the big news with SATA-II isn’t the faster interface but instead centres on NCQ (Native Command Queuing) and Staggered Spin-up Support, though some SATA1 drives also support NCQ. NCQ is a prefetch technology that requires a suitable chipset such as nForce4 to speed up data transfer in a bid to get round the limitations of the mechanical device that lies at the centre of your solid state PC. Staggered Spin-Up enables the computer to turn on the various drives sequentially at start up to give your power supply an easier time. These are SATA technologies so it’s a surprise to see that Hitachi includes a legacy four-pin Molex power connector on the back of the drive.


Take a close look at the power and data connector pins on a SATA drive and you’ll see that they vary in length, so that the electrical connections are made in a specific order in order to protect the drive if you hot-plug it. By contrast a legacy connector slams all four contacts into action simultaneously, increasing the chances of frying your hard drive circuitry unless you first shut the PC down.


The Hitachi achieved sequential read and write speeds that were very similar to the Seagate but which were significantly slower than the Raptor. Of course the Raptor uses 2.5inch platters and has a rotational speed of 10,000rpm so you’d expect it to be fast, but even so the Hitachi wasn’t as quick as we would expect for such a new design. It’s very quiet in operation but it gets fairly hot and runs five to ten degrees hotter than a drive with fewer platters.

HD Tach confirmed that Hitachi’s claimed 8.5ms seek time doesn’t include the average latency of 4.16ms that you get with a 7,200rpm drive so the true figure is actually 12.5ms, which is still faster than the 13.2ms we saw for the Seagate drive.


The HD Tach figures looked perfectly acceptable but we decided to format the drives, install Windows XP and then run PCMark05. This reminded us of one of the issues with high capacity drives as it took two and a half hours to format the 7K500. In the process we lost 35GB of space which is the usual seven percent that you kiss off to formatting, but it seems like a monumental amount when you consider that you have doubtless owned PCs with less than 35GB of storage. 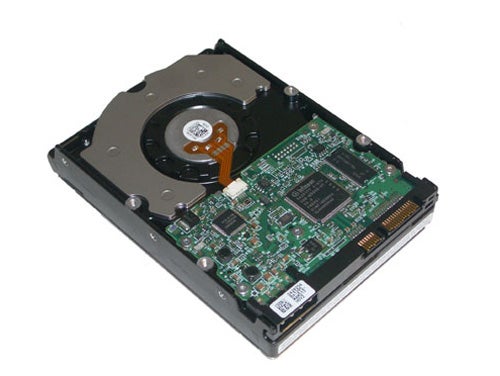 Once we were done we ran PC Mark05 and initially, the results were quite shocking as the Hitachi only scored 1,217 marks compared to 1,924 for the WD Raptor and 2,174 for the Samsung. There’s no way that the Hitachi has a mere 55 per cent of the performance of the Samsung so we checked our test results carefully and found that PCMark05 requires a CPU driver patch to make the test recognise dual-core processors correctly. You can download the patch here. The patch only works with Windows XP SP2, rather than SP1, so we had to reinstall Windows on the Hitachi, Samsung and WD drives but the effort was worth it as the Hitachi managed the same overall performance as the Raptor, which is rather impressive.


All of this messing around was a pain in the neck however it set a train of thought in motion. Buying 500GB of storage in the form of two 250GB drives or three 160GB drives will currently cost you about £160 or £170 so you’re paying a significant premium for a single 500GB drive. Formatting the 500GB drive takes ages, and if it fails then you lose everything on it, which is likely to be a huge amount of data, while offering you little in return unless you’re the one in a million who has a small form factor PC yet you feel you need for half a Terabyte of storage.


Hitachi can legitimately claim that the 7K500 is the first 500GB hard drive on the market but despite the fact it uses SATA-II there’s no compelling reason to buy one enormous drive instead of two smaller capacity units.