In case you’re wondering, no, we haven’t made a typing error. Hitachi’s 42PD6600 really is a 42in plasma TV that can be yours for as little as £1,200. In other words, it costs the same as most 32in LCDs, but delivers a massive 10in more of flat-panel picture loveliness. Crikey. To say this Hitachi has got our attention would be something of an understatement.


It’s got the looks to keep our attention, too. Usually budget 42in plasmas (for yes, remarkably one or two other screens have managed similar price points) are just boring, plasticky silver rectangles. But this Hitachi looks both solidly built and actually quite stylish in its take-no-prisoners black livery.


Connectivity is a relief, too, in that there’s been no price-induced compromising on the high definition front; both HDMI and component HD options are present and correct. There are three Scarts too, when many ultra-budget TVs only bother with two, not to mention a D-Sub PC connection, and even a subwoofer line out if the bass from the built-in speakers fails to satisfy your low-end lust! 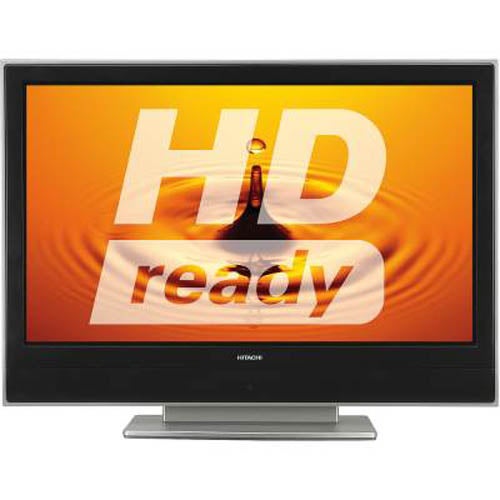 Checking out the screen’s quoted specifications quickly throws up a seeming anomaly: a native resolution of 1,024 x 1,024. You don’t have to be Einstein to figure out that if this resolution is correct, the 42PD6600 should be completely square. Yet we can assure you that it’s definitely a widescreen TV. So what gives?

The answer lies with AliS – or ‘Alternate Lighting of Surfaces’ to give it its full title. ALiS is a technology developed by Hitachi and Fujitsu that works – without getting too technical on you – like this.


Whereas most ‘normal’ plasma TVs have a single strip of electrodes for each horizontal line of plasma cells, AliS panels share an electrode strip between two lines of cells. These lines then switch on and off thousands of times per second, so that at any moment in time only half of the panel’s pixels are actually active. This means that a) ALIS panels have less of their physical space taken up by electrode strips (which show up as black lines on a normal plasma if you stick your head right up to the glass); b) there’s a greater phosphor area to be illuminated; and c) the so-called ‘aperture ratio’ that light emerges through is increased by 55 per cent

AliS panels thus claim to produce brighter images than normal for the same running power – or the same brightness levels as a normal plasma while using only half as much power. Plus of course, to bring us back to the resolution point that forced this technical diversion in the first place, the AliS design allows Hitachi to describe the resolution as 1024×1024. All clear now? Er, oh.


Other features on this Hitachi are understandably limited, given its price. Aside from the fact that the screen is HD Ready, really the only things worth running by you are an optional 3D Comb Filter; dynamic bass and ‘spatialising’ audio effects; video noise reduction; and a film mode that adjusts the set’s progressive scanning to make motion during movie (as opposed to TV) viewing look smoother.


You’ll note that there’s no digital tuner; a disappointing but hardly surprising omission on a £1,200 42in plasma TV. 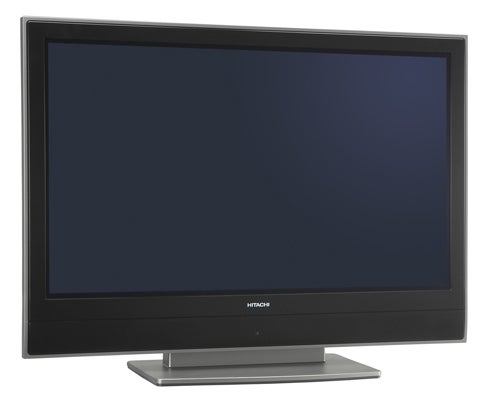 It’s fair to say that the picture quality from the vast majority of other sub-£1500 42in plasma TVs released to date has been average at best – and damn poor at worst. But this Hitachi is having none of this, instead serving up pictures that are never worse than decent and are at times very good.


The very good moments are all without exception seen during high definition viewing. With a solid HD source the picture looks impressively clean, richly coloured, replete with contrast and black level, solid, three-dimensional and fluid. In fact, the only minor complaint we could raise would be that more expensive screens can look slightly sharper and deliver more of high definition’s lovely fine details.

The simple fact is that the processing this Hitachi plasma uses to map standard definition pictures onto its 1,024 x 1,024 resolution just isn’t as forgiving of source weaknesses as that of some more expensive screens. So while standard def pictures can be perfectly enjoyable for 90 per cent of the time, weaker efforts can look decidedly soft, as well as suffering one or two dodgy colour tones.


Standard definition pictures are occasionally also blighted by traces of three traditional plasma problems that the best new screens have more or less eradicated. First, during camera pans you can see fizzing noise over ‘peak’ parts of the picture, especially people’s skin. Second, dark areas can suffer with some low level grey pixel noise. And finally, what should look like smooth colour blends can sometimes appear instead as a series of unsubtle stripes. 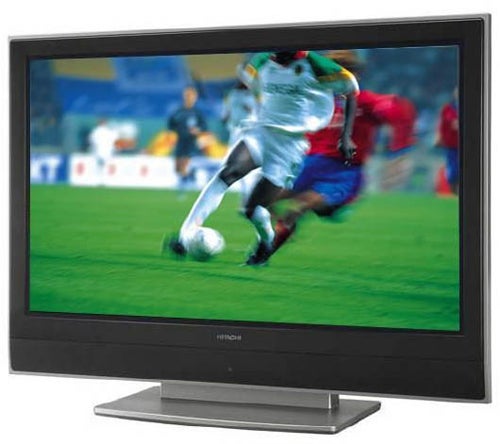 One last general grumble now that we seem to be enjoying an early sunny spell is that the Hitachi’s screen tends to reflect light in the room a bit more than we’d like.

Sonically the 42PD6600 is solid. It has a decent stab at producing the sort of bass levels needed to bring an action movie to life, and treble effects sound clean and distortion free. The only problem is that the middle of the sound range feels a little underpowered, which can make vocals struggle during louder moments.


OK, so we’ve established that the 42PD6600 isn’t perfect. But what did you expect for £1,200? The reality here is that the 42PD6600 is actually miles better than any other 42in plasma around for anything like the same money. And as such it’s a dream come true for any high definition fan who’s desperate for a substantial flat TV but doesn’t have a limitless bank account.