Hitachi’s latest TV range is nothing if not diverse. The company has no qualms about offering everything from the most basic and cheap of entry-level LCD models – all the way down to 15in – to all-singing, all-dancing, king-sized home cinema centrepieces like the 55in plasma 55PD9700.


The 32LD9700 we’re looking at today sits at the top end of Hitachi’s LCD range – a fact reflected right away in its pleasingly stark, strikingly well-constructed bodywork.

It’s also got the sort of connectivity that befits a flagship range, with highlights including twin HDMI support, a trio of Scarts, a PC port, component video input, plus some handy ‘multimedia’ provision in the form of a USB port for attaching digital cameras and an SD card slot for direct playback of digital photocards.

Probably the thing that most defines the 32LD9700’s flagship status, though, is its employment of Hitachi’s Picture Master image processing. On paper this doesn’t sound anything particularly special; yes, it improves clarity, contrast, perceived image depth, and colour toning. But then so do most systems from rival manufacturers. What sets Picture Master apart is the simple quality of what it does; some processing systems are simply better than others, even if they’re all trying to do the same thing, and from what we’ve seen before, Picture Master is among the best out there.


There’s an added element of interest with the latest generation of Picture Master too, in that it has apparently been specially tweaked to work in better harmony with the new ‘IPS Alpha’ LCD panel design Hitachi has used for the 32LD9700, identifying and analysing constituent colour elements with extra accuracy.


The introduction of the IPS Alpha panel is potentially very significant, since Hitachi claims it makes significant strides in tackling a trio of LCD’s traditional weaknesses: motion smearing, contrast range, and viewing angles.

The motion handling improvement comes courtesy of new panel circuitry – dubbed ‘overdrive’ – which makes the LCD crystals go through their necessary open-to-closed cycle faster, so that they keep up better with the demands of an object moving at speed across the screen.


Regarding contrast, the improvement is down to advances in controlling the IPS Alpha panel’s backlighting. So during dark scenes the lamp reduces its output to boost black levels, raising it again during bright scenes.


Finally, when it comes to boosting ‘real’ viewing angles, Hitachi reckons that thanks to innovations in the pixel structure you can watch the 32LD9700 from as much as 176 degrees without suffering any significant loss of colour or contrast. And you know what? Based on a couple of minutes spent strolling around the TV, we think that 176 degree claim is far less optimistic than you might think. Excellent!

A search for other key features of the 32LD9700 uncovers a digital tuner with all the usual electronic programme guide and ‘Top Up TV’ subscription channel support. Plus the attractive onscreen menus play host to an exceptionally long list of unusual picture tweaks, such as a 3D comb filter option, a line transient improvement option, a colour transient improvement option, both chroma and ‘normal’ noise reduction routines, and the facility to tweak the backlight manually if you’re not happy with the TV’s automatic system.


As experienced TV testers who at least like to think we know our way around what makes a TV picture tick, we actually quite enjoyed having this level of flexibility available to us. But from a normal consumer’s point of view we can’t help but think that the options actually go a bit far, and have the potential to be more confusing than helpful. So our message to you would be that if you’re not sure what one of the features does, leave it well alone…

Especially since you really don’t have to work too hard anyway to get the 32LD9700 producing a truly delightful picture. This is one TV that really does know how to make an outstanding first impression, with the intense sharpness and clarity of its pictures snagging our eyes right away and having us positively purring at how truly ‘high definition’ HD sources like our Xbox 360 and Sky HD receiver look. For instance, the detail evident during a play of the Xbox 360 title Crackdown enabled us to see further across the city from our vantage point atop the Agency tower than is possible with the vast majority of LCD rivals.


The HD showing of England, um, ‘pummelling’ Andorra 3-0 on Sky HD the other night, meanwhile, proved that the 32LD9700 is also capable of retaining its clarity better than most (though not perfectly) when there’s fast motion around. 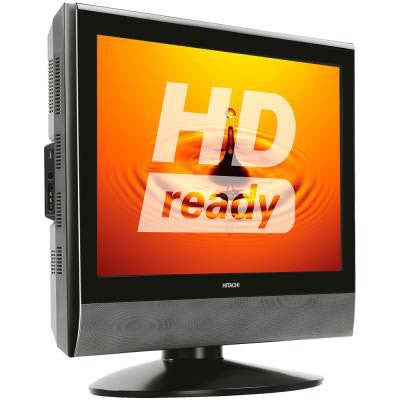 As a further testament to this early demonstration of Hitachi’s Picture Master processing’s credentials, standard definition also looks about as crisp and even as it does on Philips’ Pixel Plus 3 HD sets – and you can’t really ask for more than that.


Yet more immediate impact comes with the 32LD9700’s colour range. It can certainly do vibrant like practically every LCD TV these days; the rich hues of the excellent Casino Royale Blu-ray disc look positively radiant. But more tellingly it can also do subtle, picking out with accuracy, for instance, the very difficult skin tones evident as Superman flies Lois Lane over Metropolis at night in Superman Returns. It’s canny, too, at rendering even the finest of colour blends, allowing pictures to look more believable and three-dimensional.


The Lois Lane flight scene in Superman Returns also shows the 32LD9700 to be a good black level performer, with less of the customary LCD greyness and more of the oft-lacking background shadow detailing. 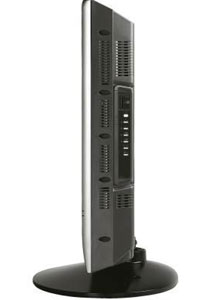 If you want to know what could be better with this TV, in an ideal world the 32LD9700’s black levels would be even deeper; they certainly aren’t as assured as those of Philips’ high-end Cineos LCDs, for instance. Plus it really is possible to make a bit of a mess of things if you tinker too much with some of the TV’s endless picture tweaks without knowing what you’re doing. And finally, the TV’s sonics rather let its pictures down by not having enough of a frequency range – especially where bass is concerned – to rise comfortably to the challenges posed by a healthy action scene.


We guess it’s possible that the 32LD9700’s rather average audio might just put a few people off buying one. But we wouldn’t be among them. So far as we’re concerned, just being able to get 32in of LCD pictures this good for the criminally low price of £642.01 is more than enough to win us over.