More often than not, we take the view that once you’ve decided on the graphics chip you want, the choice of which actual card to pick can pretty much come down to what game it comes bundled with, and of course price. This is because so many of the manufacturing partners use the ATI or nVidia reference design for their cards, which leaves little room for any difference in performance, whether that be thermal, acoustic or computational. However, every now and then we come across a card that stands out from the crowd, such as this HIS 4670 I’m looking at today. 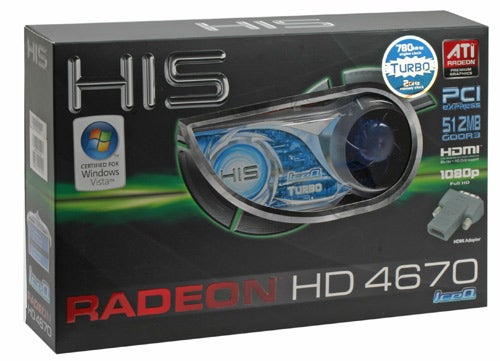 As the name suggests, it’s based on ATI’s HD 4670 card, which really impressed us, even as a standard card. It combined a healthy dose of performance with low power consumption, a plentiful feature set and a low price that we felt made it a great entry-level card for those that fancied boosting their computer’s graphics without breaking the bank.


You can read the full low-down on the technology used in the chip at the heart of the HD 4670 card here but in summary it contains 320 Stream Processors, 8 ROPs, 32 texture units, and comes clocked at 750MHz with GDDR3 memory running at around 1,000MHz (effectively 2,000MHz). That lot will set you back about £65 and in our previous testing we found it was a perfect match for those looking to play their games at high-quality settings on monitors with resolutions of 1,680 x 1,050 (the resolution most 22 and 20in widescreen monitors use) or lower. As was usually the case, Crysis proved more taxing than the other games on test so you can expect to be playing this game at medium detail settings or at a lower resolution if you want decent framerates.


The HIS HD 4670 IceQ Turbo, then, takes the basic formula of the HD 4670 and adds a different cooler, overclocks things a little, and tweaks the output configuration. So let’s see how it stacks up. 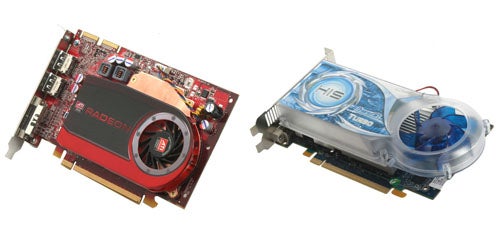 The bundle is about as basic as you can get with just a driver CD, DVI-to-HDMI and DVI-to-VGA dongles, and a quick installation guide that consists of a single page (in multiple languages) of generic card installation instructions. So, it’s clear the bundle is not going to be the deciding factor in opting for this card over any other. It’s worth noting, though, that you very seldom get free games with sub-£100 graphics cards so the absence of one here is nothing out of the ordinary.


The card itself uses HIS’ signature blue PCB, which does little besides look a bit different. What’s of more interest is the Arctic Cooling HeatSink and Fan (HSF).

HIS has been using Arctic Cooling coolers for a number of years now and largely with great success. The design is really as simple as it gets. A large fan at the back blows air across an all-aluminium heatsink and expels it out the back through the grilled expansion card plate. This does require the cooler to be double height but it ensures hot air isn’t trapped inside the case like it is on the single slot cooler used on ATI’s reference card. 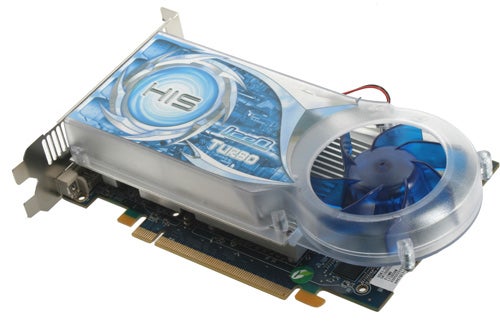 The slow speed of the fan also keeps noise to a minimum, though the fact that it isn’t variable means it’s never quite silent. Not that it’s louder than the stock cooler. Indeed, it’s markedly quieter when under load but it would’ve been nice if the fan could completely shut down when the card is idle. Also, it would have been preferable for the memory chips to be covered by the heatsink as well.

That said, a quick look at the card’s core temperature reveals just how effective this cooler is, with a massive 30 degrees Celsius difference between the reference and HIS card when being used for gaming and a still significant difference of 15 degrees when idling.


Of course, aside from reducing noise and keeping things cool, what a good cooler can potentially do is give you more headroom for overclocking. We initially tested this by using the overclocking facility in ATI’s drivers but quickly found we could reach the maximum allowed overclock of 800MHz core and 1,000MHz memory. We then moved onto the freeware overclocking tool RivaTuner and found we could push things up to 824MHz core and 1101MHz memory. In comparison, our ATI reference card could reach 810MHz and 1101MHz, which would suggest there’s little scope in pushing these chips further regardless of what cooler you use.

Outputs on the reference HD 4670 card we reviewed were rather more progressive than we’re used to, consisting of two DisplayPorts and one dual-link DVI. HIS, however, has chosen to stick with a more familiar configuration in the shape of two dual-link DVI outputs and a multi-format analogue output. Natively, the latter supports S-Video, while a dongle is needed for component and composite video support. Unfortunately, such a dongle is not included in the box. Likewise, the DVI ports are compatible with DVI-to-DisplayPort adapters but such a thing isn’t included.


The ATI HD 4670 was already the best graphics card to get if you had around £65 to spend so by adding a top-notch third party cooler HIS has made its HD 4670 IceQ Turbo a very desirable card. It’s cooler and quieter than standard cards and provides plenty of thermal headroom for overclocking. Best of all, though, is the price, which has remained at a very competitive £65.