The original Hi-Grade DMS was a bit of a milestone, since the company commissioned the case specifically for the task and modified it to offer all the features that a user might want. The DMS II however is a different kettle of fish, this box is based on an Intel designed chassis and as such you can probably find very similar devices on sale elsewhere. Of course this isn’t a bad thing, and you’d hope that a company like Intel with its immense R&D budget could come up with a pretty good Media Center box.

The Hi-Grade DMS II slots nicely into the third category and has been designed to sit unobtrusively under your TV. In some ways the DMSII does look more like a consumer electronics device than a PC, but as Benny pointed out when he saw it, it looks more like a 1980s VCR than a cutting edge home cinema appliance. I think the main reason for this is the huge clock/date display at the right, which reminds me of my old Ferguson Video Star – although this one isn’t constantly flashing!


As well as the time and date, this display also tells you what the machine is currently doing – eg. if you’re watching TV, then “TV” is displayed, or if you’re viewing a slideshow of images then “Picture” is displayed. The display will also show the name of each file being accessed, whether that be a picture, video clip or music track.

Below the display are your basic controls – Play, Stop, Pause, FF, RW, Skip Forward and Skip Backward. The design of these buttons is somewhat strange, with a large Play button at the centre, with the other buttons extending both left and right, in ever decreasing sizes. The result is that the Skip buttons are tiny, which is a shame considering the fact that these tend to be used quite often. That said, the whole point of a Media Center device is to use the remote control – but then I wonder why these buttons are exposed at all.

To the left of the display is the eject button for the DVD drive, and although this is labelled DVD-ROM and CD-RW, it is actually a DVD writer that can burn DVD+R/RW, DVD-R/RW and DVD+R dual layer. At the far left is the power button, which sports, yep, you guessed it, a blue light.


There’s a fold-down flap that runs along the length of the front fascia, and under here you’ll find a plethora of connection options. At the far left is a 7-in-1 card reader that accepts CompactFlash Type I and II, SmartMedia, MMC, SD, MemoryStick and MemoryStick Pro. Next along you’ll find S-Video and composite video inputs, along with left and right analogue audio inputs. You’ll also find full size headphone and microphone sockets, two USB 2.0 ports and a four-pin FireWire port. Finally there’s a four-way navigation pad with an “OK” button in the centre, along with Home and Back buttons – presumably in case the batteries run out in the remote. 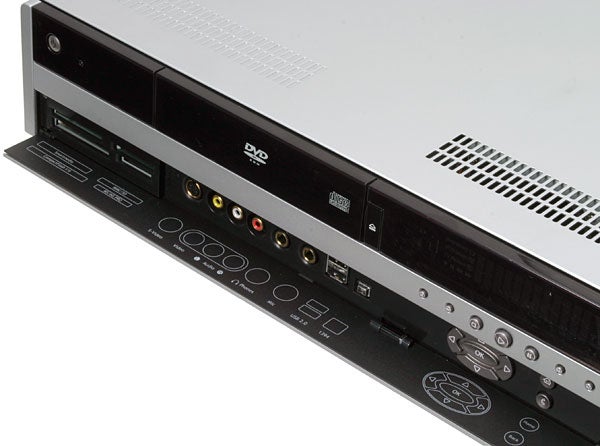 The rear is even more feature packed than the front. At the far left are the twin analogue TV tuners. Thoughtfully there’s only a single aerial socket to service both tuners and you also get two sets of S-Video, composite video and analogue audio inputs. There’s also a connection for the FM tuner.


Next along you’ll find inputs for analogue D-SUB, DVI and S-Video. It’s clear that this machine is aimed at those with a decent LCD or Plasma screen that can handle a proper high resolution input, and I’m not against that approach. With HD broadcast content just around the corner, we should all be thinking about upgrading our TVs.

Below the main input connectors there are two six-pin FireWire ports, a modem socket, another D-SUB port, an Ethernet port and two USB 2.0 ports. Sound outputs are more than well catered for with both optical and coaxial S/PDIF ports along with 7.1-channel analogue audio outputs.


In use the DMS II manages to pull off most of the tricks that you’d want from a Media Center PC – it’s reasonably slim, pretty quiet and can handle pretty much every living room task you’re likely to throw at it. Media Center 2005 is, as always, a joy to use and even a novice user will be getting to grips with all their digital content, as well as online streamed content in no time at all.

The remote control is an original Media Center device which lacks the Teletext and FastText buttons. Of course if you don’t use Teletext then this won’t be much of an issue to you, but it’s a shame all the same, since there are Teletext equipped remotes available.


The keyboard is a wireless device, designed to sit on your lap, much like the one seen with the Elonex Lumina. Unlike the Lumina keyboard though, this one uses infrared rather than RF as the wireless connection method. I’ve never been a fan of infrared keyboards in the past, because I found them to be patchy at best, with characters dropped regularly when typing. However, this one performed flawlessly during use, and the integrated trackball made pointer manipulation simple and accurate. The only downside is that the infrared receiver isn’t integrated into the DMS II, so you need to have a rather bulky receiver sitting on top, or next to the machine. 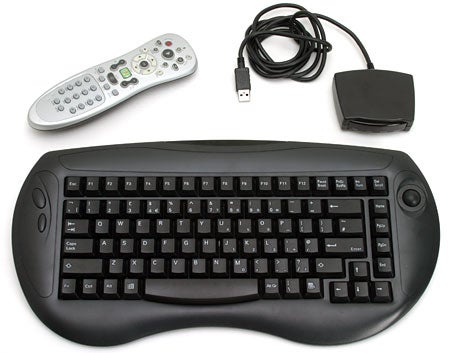 Although the DMS II that was supplied shipped with a twin analogue tuner, Hi-Grade has informed me that DVB tuners are available as well. Personally I’d go for DVB, that way you’ve got digital TV without the need for a separate set top box.


The integrated modem also means that you can make use of the caller ID feature of Media Center 2005 – this means that if someone calls while you’re watching TV or a movie, the number will appear on the screen and you can decide whether you want to answer or ignore it. It might not be the most important feature in Media Center, but it’s pretty amusing nonetheless.


You can also configure your instant messenger to work under Media Center. Then all your friends who have you in their buddy list can annoy you by sending messages to your screen when you’re in the middle of watching a movie.


Specification wise, the DMS II is powered by a 3.4GHz Pentium 4, backed up with 512MB of RAM and a 250GB Western Digital hard disk. All in all, you should be able to run pretty much anything on this machine, although the Radeon X300LE graphics card isn’t going to handle any recent games.


The Hi-Grade DMS II is a strange beast. In many ways it ticks close to all the right boxes for a living room based Media Center solution, but I just find the look and feel of the device a bit too generic. I guess this isn’t too surprising since as I already mentioned, this is an Intel reference design box, and other manufacturers can produce similar machines based on the same chassis.


Personally if I’m going to have a Media Center box sitting under my TV I want it to look as good as my other home cinema equipment and unfortunately the DMS II doesn’t. To be fair, the only system that I’ve seen that would look good in a high-end AV setup is the Hush Media Center box, but you have to remember that you’re paying lot more for this solution.


Even though I think that the DMS II is quite disappointing in the design and aesthetics stakes, it’s hard not to give it a decent set of scores. Ultimately, it performs well for a Media Center PC and has most of the features you’d want in your living room.


This brings us onto pricing and at £1,098 including VAT, the DMS II is significantly cheaper than the aforementioned Hush, but I would probably still save up more and go for the totally passive and beautifully crafted Hush machine.


The Hi-Grade DMS II is a solid attempt at a living room based Media Center solution. The box is reasonably slim and it runs pretty quiet, but the chassis looks too dated to fit in with today’s sleek and stylish home cinema equipment.