Despite the versatility of the USB port it has taken a long time for a compatible tape drive to appear on the market. Nevertheless, Sony launched a USB version of its AIT drive earlier this year and HP also joins in with a USB version of its popular DDS-4 and DAT 72 tape drives. All wasn’t plain sailing though as HP had to develop its own USB Windows driver and spent some time working with Symantec to get USB support implemented in v10.0 of its Backup Exec software.


The DAT 72 model on review is the external version which is well built with the drive enclosed in a sturdy plastic chassis. The USB cable is fixed at the rear and the internal power supply means the drive can be powered with standard kettle lead. Our only complaint is that the internal cooling fan is a tad on the noisy side. The drive uses compact 4mm tapes and has the added advantage of being backward read and write compatible with DDS-4 and DDS-3 media as well. Installation is a swift process as the drivers need to be installed first after which the drive can be plugged in.

Development of this tape format hasn’t been a smooth process as the co-developers, Sony, Seagate and HP decided in 2001 to make DDS-4 the last generation. Bowing to end-user pressure HP picked the banner up again in 2003 and brought the DAT 72 to market. The only reason it can’t be called DDS-5 is that Sony co-owns the DDS logo and would not give permission to let it be used for this. The product roadmap was looking a bit shaky for a while but HP advised us that it expects to have DAT 160 available by April 2006 with two more generations to follow.


The drive is bundled with Yosemite Technology’s TapeWare XE backup software licensed for a single server. It’s not the most popular of products currently available although we found it reasonably easy to use, while offering plenty of useful features. A smart feature is HP’s OBDR (one button disaster recovery) which ties in with the TapeWare software. Holding down the eject button while powering it on causes the drive to emulate a bootable CD-ROM drive. Start the server and it will boot from the latest full backup copy allowing the hard disk to be restored.


For performance and compatibility testing we hooked the drive up to a Dell PowerEdge 830 server running Windows Server 2003. To test performance we used a 15GB mixture of files and asked the drive to backup, verify and restore the data to its original location. TapeWare had no problems working with the drive but its poor job reporting makes it difficult to get a clear picture of speed. We estimated that TapeWare returned approximately 170MB/min during backup, 175MB/min for verification and 171MB/min for restoration.

HP currently has a deal with Symantec where the latter is offering a discount on its Backup Exec software to DAT 72 USB owners – for details click here. It does add to the expense but looks a good alternative to TapeWare as backup and verification tasks using the same test data returned a much faster 193MB/min and 196MB/min respectively. Data restoration speeds were also good with the test data returned to its original location at an average rate of 195MB/min. 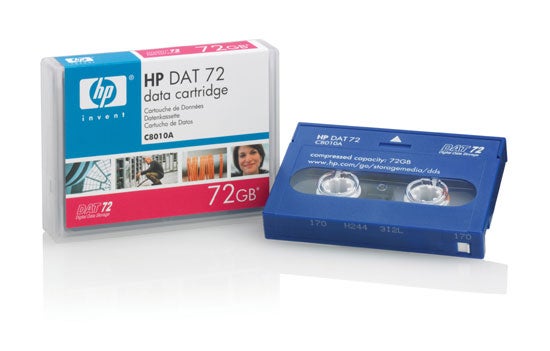 We also brought in EMC’s Dantz Retrospect to check for compatibility and found it had no problems recognising the drive. It too returned better performance than TapeWare with backup and verification tasks delivering average speeds of 189MB/min and 194MB/ min respectively while a full restore saw an average of 193MB/min. We tested the OBDR feature by creating a full backup of the server using TapeWare. With the tape already inserted you need to power the drive on with the eject button held down and once the Tape and Clean LEDs start to flash you can power the server on. Our test server booted without any problems from the tape drive and presented a simple menu for recovering a boot disk or restoring the entire system.


We did encounter a minor problem though – if a tape is inserted after Backup Exec starts its Windows services it won’t be spotted. The only way around this at the moment is to stop and restart the services. The versatility of the USB port is actually a problem here as moving the drive to a different port would cause Windows to detect it as second drive. To avoid this HP has specified to software vendors that the drive should be detected via its serial number so multiple entries don’t occur. This is an issue that HP is aware of and is working to resolve it. It’s also planning on bundling the drive with its own Data Protector Express software which it says will have improved detection capabilities.


The USB DAT 72 looks a better bet for small business backup than its SCSI counterpart. It delivers similar performance and costs around the same but doesn’t incur the extra expense of a SCSI host adapter. The bundled TapeWare software isn’t our favourite but it does provide valuable disaster recovery features. 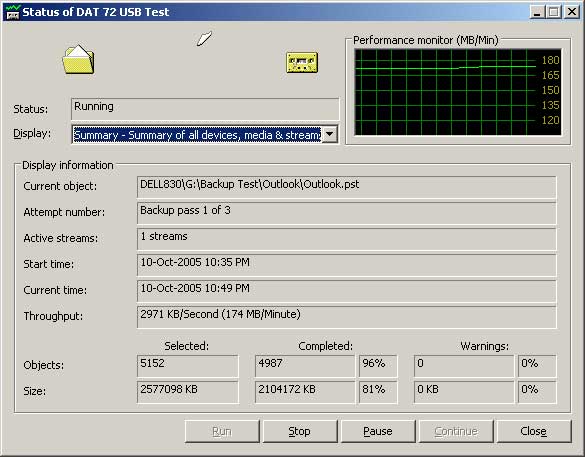 TapeWare’s reporting is somewhat esoteric but it did deliver a reasonable performance. 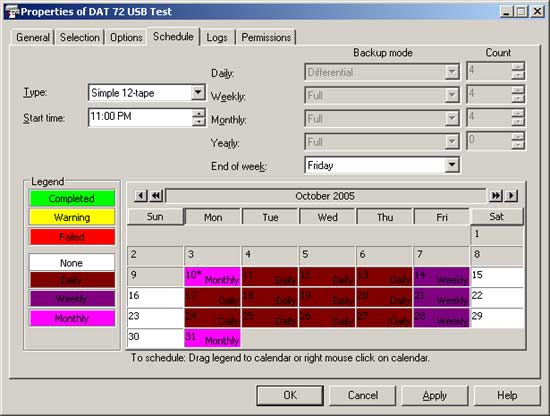 The OBDC feature included with TapeWare allows the tape drive to be used as a bootable device.

We checked EMC Dantz Retrospect for compatibility and found no problems.