Available on PS4, PS3, PS Vita (PS4 and PS Vita reviewed)
It might look like just another twin-stick shooter, but Helldivers is smarter than you think. It’s smart in its humour, smart in its core mechanics and smart in its long-term systems. Most importantly, it’s smart enough to wrangle an unholy array of influences, including Diablo, Destiny and the Renegade Ops school of shooters, not to mention Paul Verhoeven’s film of Starship Troopers, into one coherent whole.

Why Starship Troopers? Well, it helps that Helldivers’ first enemy race is a bunch of giant bugs, but the bigger reason is that premise is ripped nearly entirely from the movie. Helldivers covers the ongoing wars between humanity and three intergalactic enemies, with you placed firmly on the front lines. As one of the Helldivers of the title, you’re dropped on the surface of an alien planet, given a series of objectives, then expected to complete them before calling in a shuttle for extraction.

The tutorial makes it clear what kind of force and what kind of war this is: life is cheap, war is glorious, and today is a good day to die. In its OTT, sardonic take on sci-fi warfare, its talk of ‘managed democracy’, sacrifice and liberty, Helldivers is singing straight from the Starship Troopers hymn book.

Through the tutorial, you’ll get a grasp of the basic mechanics. You move with the left stick and optionally aim with the right while dispensing vengeance on the murderous mega-insects with the L2 button. The R2 button reloads your weapon, while L2 brings up a menu of airdrops and airstrikes, summoned by a sequence of taps on the D-pad. L1 either throws a beacon to call in the required support, or a grenade. 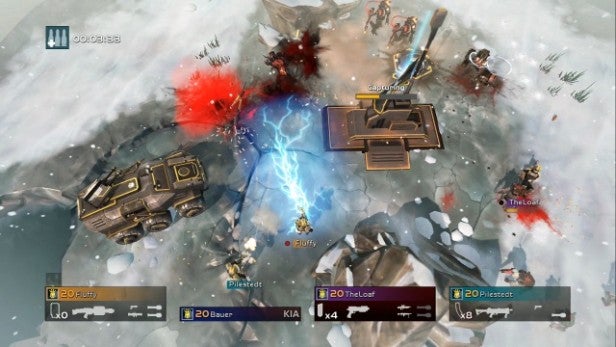 Objectives come in a number of guises, ranging from taking a control point to activating SAM sites to destroying bug nests. You wander around the map, tackling them in any order that you fancy and blasting the ravening bugs that skitter, sprint or lurch towards you. When you’re finished, you call in the shuttle then wait ninety seconds for it to arrive. At this point, predictably, an avalanche of bugs descend on your position.

At first, Helldivers seems to have its design out of whack. The bugs come thick and fast, your weapons don’t seem fit for purpose, and you need to reload more often than seems plausible. Reloading is slow and leaves you vulnerable, and after a few reloads you’ll find yourself entirely out of ammo. The first few missions are easy enough for you to cope with all these issues, but after a few planets you might find the going tough.

The trick, of course, is to make the most of your support drops. Call in ammo drops to keep the bullets coming. Call in airstrikes to take out tougher enemies. Call in automated machine gun turrets to thin the waves of bugs so that you can take out any stragglers while the shuttle’s on its way.

Even here, though, the game seems determined to make life difficult for you, asking you to master D-pad sequences that take a few seconds to trigger even when you get them right. Tapping up, right, left, down, up or some such while facing down a rush of bugs isn’t as easy as you might think. Luckily, in solo play you have a limited number of respawns, with that number rising with every completed objective. 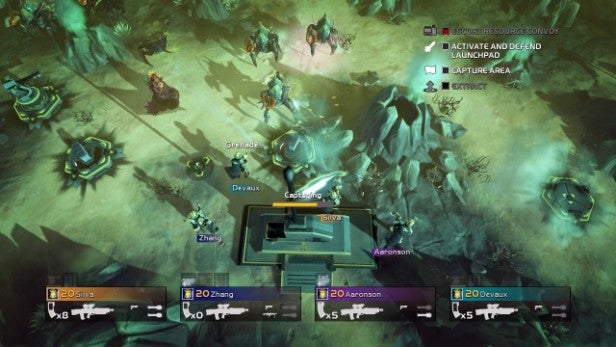 Completing missions, killing bugs and extracting successfully nets you experience points, levelling up your Helldiver and unlocking new weapons and drops. The game also has a separate technology tree, where levelling and collecting samples can net you research points, which can be spent on weapon upgrades, drop enhancements and other perks. You can also unlock new armour, while every contribution you make in battle feeds into a community-wide war, so that you can build a reputation as a hero and help humanity defeat the fiendish bugs.

Let’s be clear: Helldivers doesn’t really work as a single-player game. It’s a nice enough looking game, dolling up the top-down shooter with great lighting, nice textures and some fantastic dust effects, but the actual maps are pretty dull. The objectives are repetitive, and the bugs aren’t as varied or as intelligent as you might hope. It’s OK to play on your tod, but the mechanics seem to work against the game, not for it.

With two to four players, however, it’s a very different story. The team at Arrowhead made its name with Magicka, a Diablo-inspired co-op action game where half the fun lay in the unintentional comedy of friendly fire. Sure, you were ostensibly fighting ghouls and goblins, but the big laughs came when things went wrong, as spells took out fellow players often at the most inconvenient times. The same is true of Helldivers. It’s a great co-op action game, but an even better one when something goes amiss. 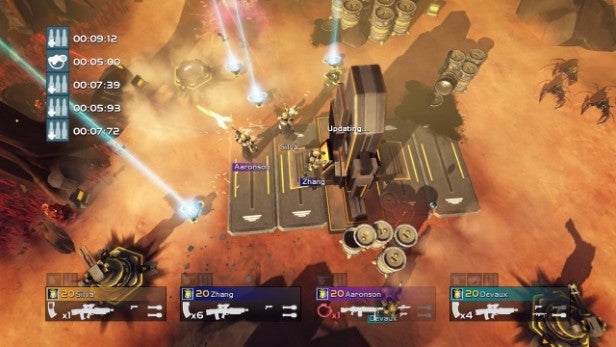 The mechanics that seemed so ornery before suddenly make sense in co-op play. Reload times are slow because it encourages other players to cover for you while you’re reloading. Ditto for those annoyingly complex support requests. Downed players need to be helped up before they’re clawed or mangled, and dead players can only respawn when you call in a reinforcement drop. This all transforms Helldivers into a more tactical and interesting co-op game.

But it’s a funny one too, and not just because the script is packed with parody. In any mission there are countless opportunities to be taken out by a poorly-judged shotgun blast, blown up by a hastily thrown grenade or crushed by an incoming drop, and that’s just for starters. The large scale explosives used to take out bug nests have a nasty habit of taking our your fireteam unless you sprint really fast away from them, and with so many bugs around, who has time to pay attention to that? Airstrikes and strafing runs can do as much damage to your team as to the enemy, and automated turrets can’t always distinguish friend from foe.

You’re not actively rewarded for killing other players, and there’s plenty of opportunity to heal and resupply, but a little collateral damage seems inevitable. When it happens, it more often than not leaves you grinning and laughing, even when you’re the one crushed, decapitated or blown to smithereens. Helldivers is the closest we’ve come to a video-game version of the classic tabletop RPG, Paranoia, and anyone who ever played Paranoia will tell you that that’s a good thing. 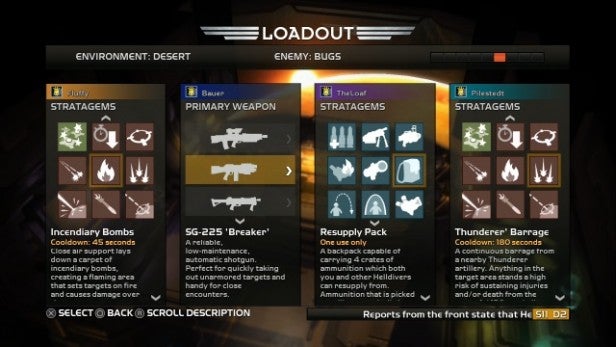 Helldivers also does a great job of getting you in a game. You can play with friends or simply browse for open matches, and you can drop into one at any time, even during the final extraction sequence. Players can commend you for good play or report you for needless griefing and it all works out at a cracking pace.

Its failing, we suspect, will be long-term staying power. While the lure of brutal new weapons and even more brutal drops will keep you coming back for more, there’s just not enough variety in the worlds or objectives to keep surprising you, even once the game starts to throw in other enemies, like rebellious cyborgs and hyper-intelligent aliens.

Each game soon becomes a variation of the same basic experience, where the only thing that really changes is how badly you and your comrades can mess up. This means that it’s a great game when you have an hour or so to kill, especially with friends, but it’s not the kind of game that you’ll come back to for hour after hour, day after day.

But then it’s not priced like one. Helldivers is a £16.99, with Cross Buy for play on PS Vita, where the controls let it down slightly but the action is fundamentally the same. You can even run the same character between both platforms. At that price, it doesn’t matter if you keep dipping in and out of it, or even if you drop it entirely after a few weeks of fun. You’ll still get your money’s worth – and more.

Verdict
For all its fast-paced blasting and wry humour, Helldivers falls flat as a single-player game. Still, who cares? It’s a hilariously gung-ho co-op experience with masses of action and some smart game mechanics that all feed into the same splatter slapstick vibe. In terms of long-term appeal it’s no Diablo III or Destiny, but it’s one hell of a laugh while it lasts.