For the erstwhile reviewer, sitting on the fence is one of the great cardinal sins – and nowhere more so than on this fine website. After all, you don’t come to TrustedReviews for some roundabout discussion of a game’s weaknesses and merits followed by a verdict along the lines of “it’s decent enough” or “if you like this sort of thing you’ll like this.” You come because you want us to tell you whether the thing is worth splashing your hard earned cash out on or not. You might want to know the reasons and the criteria, but at the end of the day you want a definite judgement. Is this game worth your time and your money? 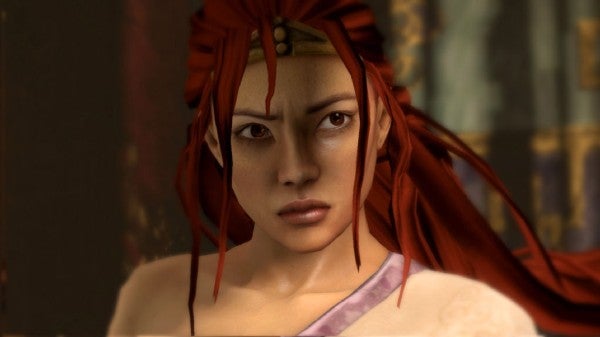 A game like Heavenly Sword can make this very difficult indeed.


As a showcase for the PS3’s graphics power, it’s very impressive indeed. As a standard-bearer for the cinematic future of the action game, it does a staggering job. As an experience, it’s frequently mind-blowing. Start getting into the nitty-gritty of game mechanics and the pace and flow of the actual gameplay, however, and it’s a game that often falls short. Not as short, it must be said, as some of the game’s harshest critics might make out, but certainly short of the masterpiece status that, on visuals alone, it might be judged worthy. In the end, it’s a game that a lot of casual gamers are going to love. What’s more, if you’re the sort of person who occasionally buys a movie just because it’s going to look fantastic on your giant LCD or plasma screen and sound awesome on your sound system, then you’ll find Heavenly Sword an essential addition to your collection. Don’t worry, you’re amongst friends here… 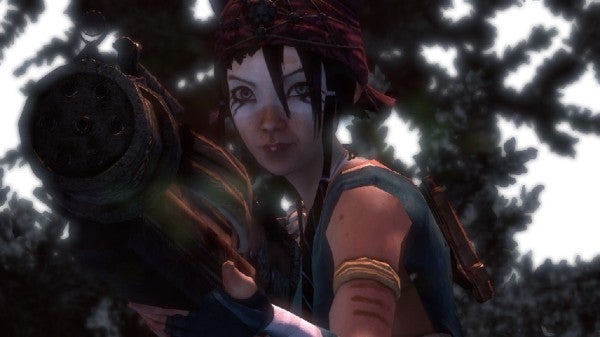 But if you’re going to judge Heavenly Sword against the current giants of the hack-and-slash action genre, then you may go away disappointed. If you can complete Ninja Gaiden with a blindfold on and one hand tied behind your back, or if you’ve cut a bloody swathe through both God of War 1 and 2, then you may come away shouting loudly not only that the emperor isn’t wearing any clothes, but that he’s not as generously endowed as he’s been making out for the last two years.

Let me explain further. I think it’s safe to say that an awful lot of work has gone into Heavenly Sword’s production values. Developers Ninja Theory roped in Andy ‘Gollum/King Kong’ Serkis to provide motion capture acting expertise and play the main villain’s role of Bothan, plus a selection of other thesps including the legendary Stephen Berkoff. They hired the multi-talented, multi-faceted jazz/world/drum&bass musician Nitin Sawhney to write the orchestral soundtrack, and orchestras in London and Prague to record it. They have combined all this talent with a frankly awesome graphics engine capable of doing both some of the most lavish large-scale battle scenes I’ve ever seen and the most incredible character close-ups of any game, ever, in the history of games so far. 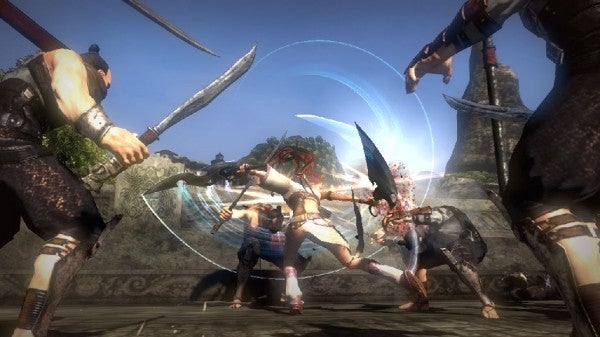 From heroine Nariko to Serkis’s Bothan, these are digital characters capable of crossing the infamous uncanny valley. They might not look 100 per cent realistic – though they’re pretty darn close – but they seem alive with rich personality. Even the bosses are interesting and appealing in their own twisted way. What’s more, these are characters you can get involved with, and in a story that you want to progress through. Why does Nariko feel she is cursed? Why the distance between her and her master swordsman father? Will using the Heavenly Sword of the title bring downfall on her and her people, or is it the only way to fight back against an evil empire? There’s only one way to find out. 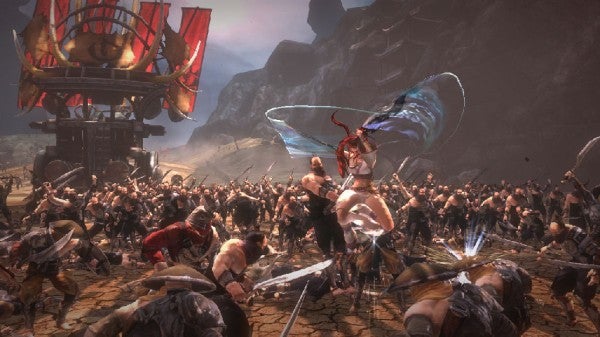 Away from the cut-scenes, the game remains astonishingly beautiful. The lighting and general ambience seems to cross the work Fumito Ueda put together in Ico and Shadow of the Colossus with the grand spectacle of God of War, with an additional rich Eastern influence that could have come straight from the Crouching Tiger/Hero/House of Flying Daggers strain of Wuxia cinema. In battle, Nariko is a magnificent presence, tumbling and slashing as her crimson hair flows in her wake. Your enemies, from common troops to slender ninjas to bestial apemen, are drawn and animated with an impressive attention to character and detail. The landscapes you battle across and through, whether a mountain path or the interior of a mighty fortress, are never less than striking. Artistically, Heavenly Sword is a complete and utter triumph. With the exception of Motorstorm, it’s the first game that – were I to watch a friend playing it or see it running in the shop – would make me want to rush out and buy a PS3.


Sadly, actually playing it opens up a couple of different opinions. Straight up, if you’re a fan of the intricate combos and gritty close combat of a God of War or Ninja Gaiden, then there’s a good chance you’ll be disappointed by the system on show in Heavenly Sword. There are combos to learn, and there is a certain degree of strategy in the fighting, but for much of the game it’s a button-masher’s dream. You block and parry automatically providing you’re not actively attacking, and pummelling the square and triangle buttons is usually enough to unleash a constant wave of spectacular thrusts, cuts and slashes on your hapless foes. That doesn’t mean that there’s no complexity. Once you’re wielding the titular blade itself, the game opens up a range of stances – range, speed and power – which, when accessed via the shoulder buttons, enable you to hold enemies at bay or smash through the defences of your beefier opponents with relative ease. What’s more, specific enemies start doing attacks that can only be blocked when in a certain stance. The more the game goes on, the more crucial this becomes. 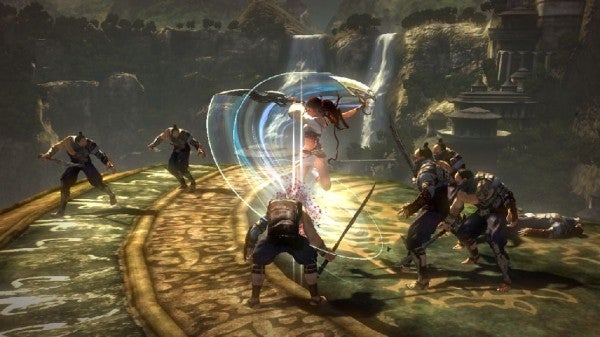 All the same, it’s hard to deny how repetitive and uninspired a lot of the action is. It’s not quite as dozy or formulaic as, say, a Dynasty Warriors or Ninety-Nine Nights, but there is a lot of battle this collection of goons, then move along a bit and bash the next stuff to wade through, and while it’s always absorbing, it’s not always all that thrilling. Some enemies or combinations of enemies demand a different approach, but these are relatively few and far between. Puzzles, meanwhile, are limited to opening doors by pulling levers, winding pulleys or throwing swords or shields at handily placed gongs. We’re not talking Tomb Raider standard, let alone anything more elaborate than that. 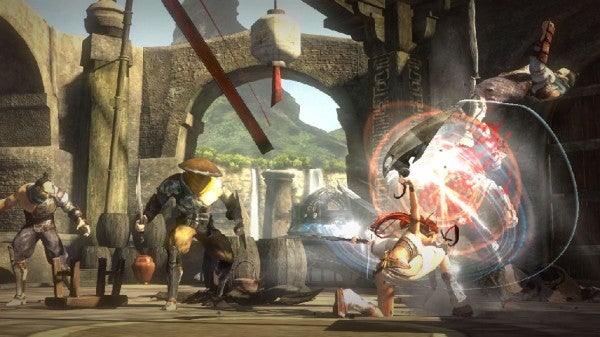 Somebody at Ninja Theory clearly realised that there was some potential here for monotony, so the hack-and-slash stuff is interspersed with some canon-firing missions featuring Nariko herself and a series of sniper challenges featuring Nariko’s archer chum, Kai. These, and many of the aforementioned puzzles, make copious use of ‘aftertouch’ – a first-person view of the fired or thrown missile where you can steer it to its objective by tilting the Sixaxis controller. Some will find this gimmicky or unnecessarily difficult and reach for the analogue stick steering option instead, but – personally – I thought it was a hoot. There’s just something about taking on a whole regiment of archers on your tod when you can take each one out in slow motion through a series of impossible, snaking shots.

Still, there’s a sense that, as the game goes on, it just doesn’t have the depth or imagination to build to the bigger, better things you might expect. Despite some interesting set-piece battles and boss encounters, Heavenly Sword falls back more and more on simply throwing on harder foes then more foes and then more, harder foes. There are even times when it gets to be a bit of a grind, and you’re glad to see the back of a specific chapter just because – when it comes down to it – trashing several whopping ape-men at once isn’t actually that much fun. Without the selection of weapons or the magic attacks you take for granted in God of War, all the button mashing occasionally gets you down. With no online options and little repeat play value it is also, it must be said, a little short. There’s a strong part of me that wants to argue that “take away all that dazzling Hollywood presentation, and Heavenly Sword probably wouldn’t be that great a game”. 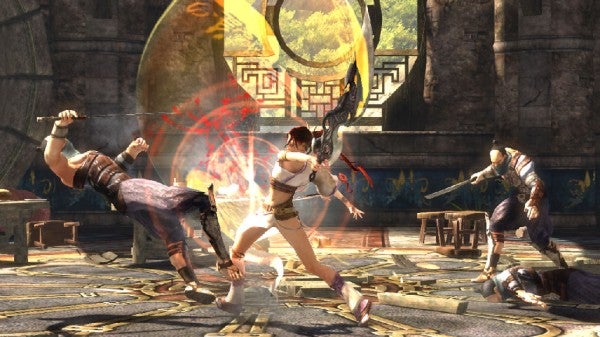 OK. Fine. But there’s another part of me that thinks differently. Think of it like this – couldn’t you say the same of 99% of Hollywood blockbusters out there? Aren’t there a lot of movie stars where, were you to pull away the looks and the glamour, you’d be left with someone of only mediocre acting talent? Would the Spider-Man movies have been great had Sam Raimi been limited to the same effects as the seventies TV series? Would Jurassic Park have been anything without the revolutionary CGI dinosaurs? Sometimes it’s OK to be swept away by eye-candy, style and production values, particularly if they also come with strong, likeable characters and decent narrative hooks. Sometimes it’s OK to gloss over the defects or weaknesses in a game’s gameplay and get caught up in the experience as a whole. If you can do that, then you’ll find Heavenly Sword a game that’s well worth your time and your money. If not, save your cash and hold off for Devil May Cry 4, Ninja Gaiden 2 or the next God of War. Just don’t spoil the fun for the rest of us with your sulky digs and cries of ‘meh.’


Beneath the high production values there’s a fairly average hack-and-slash game with a few nice ideas and some fun sniping chapters. But look at those visuals, get caught up in the experience, and you might end up saying “so what?” 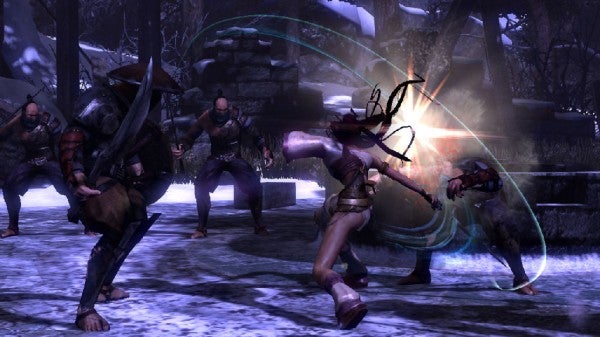