Harman Kardon makes its long overdue debut on TrustedReviews with the BDS 800, an upper class one-box Blu-ray system that places the emphasis on style and sound quality over flashy features. What you get in the box is a Blu-ray player with an integrated 5.1-channel decoder/amplifier and the HKTS 60 speaker system, which comprises a set of four identical bookshelf satellite speakers (SAT TS60), the CEN TS60 centre speaker and a compact subwoofer. It aims to bring you the best of both worlds – the convenience of an all-in-one system and the performance of separates – but with a hefty price tag, it needs that extra je ne sais quoi in order to win our respect. Let’s dive in… 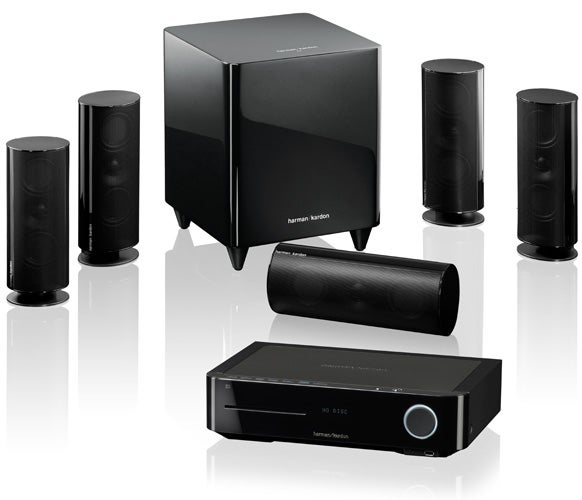 As we unpacked the component from the Russian doll-like boxes, it became immediately clear we’re dealing with a beautifully made system. All of the components have that heavy, luxurious feel about them, an indescribable air of quality that will prove wonderfully reassuring to anyone who just splashed out over a grand of their hard-earned cash.


The BDS 5 Blu-ray receiver is particularly pleasing, looking like something Marantz might have made. It’s a classy and distinctive piece of kit, boasting curved corners, a gorgeous brushed aluminium top panel embossed with the Harman Kardon logo and a glorious gloss-black fascia with a disc slot buried into it. Placed discreetly at the bottom of the front panel is a USB port for digital media playback and a headphone jack. A couple of buttons can be found along the top and a large volume dial adorns the front, but otherwise it’s a very sleek and minimal unit – plus at 400(w) x 100(h) x 260(d)mm, it’s compact too. 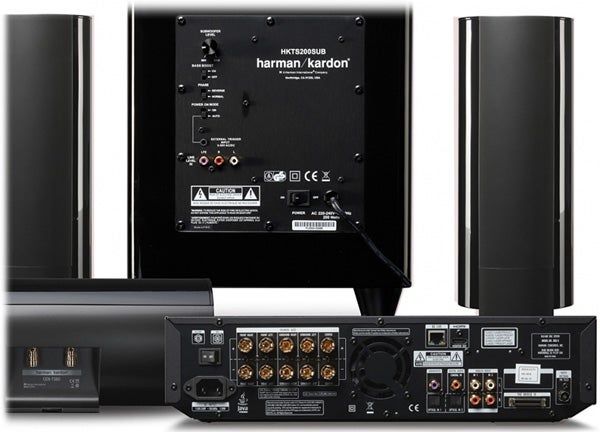 The good news continues on the rear panel with a decent selection of sockets. The first thing to catch your eye is a set of gold-plated speaker binding posts, signalling the system’s audiophile intentions right off the bat. Alongside these is an HDMI v1.3 output that pipes high-definition images to your TV, three digital audio inputs (two optical and one coaxial) and two analogue stereo inputs. Joining these regulars are a port for Harman’s optional iPod or iPhone dock (called The Bridge IIIP), an Ethernet port, subwoofer pre-out and an FM aerial input. On the downside, the lack of HDMI inputs is a shame at this price, given that most people probably have several AV components that they’d like to channel through the system. 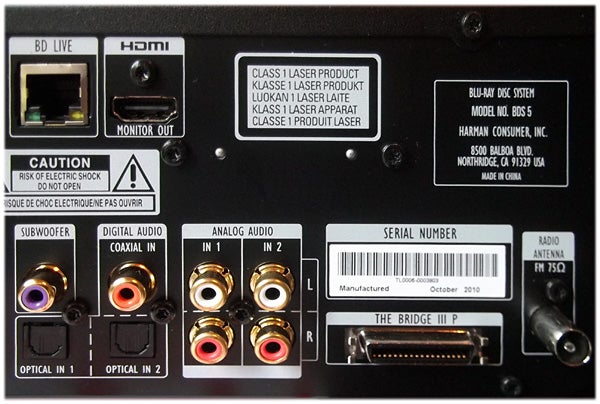 Finally, a word about the speakers. Like the main unit, the build quality is fantastic and they look delectable in their gloss-black finish and oval enclosures. Cleverly, the stands are detachable, which allows you to insert the supplied speaker cables into the spring-loaded terminals before sliding the stand into place. The subwoofer measures just 267(w) x 353(h) x 267(d)mm, making it perfect for squeezing into tight spaces, and it looks amazing with curvy corners and a deep, glossy finish to match the rest of the system. On the back are line-level inputs, phase reverse, Bass Boost and Auto Power switches and a volume dial.

The system’s spec sheet covers two sheets of A4 and looks fairly busy at first glance, but explore it in depth and you’ll find nothing out of the ordinary. Compared to systems from the likes of Samsung, Sony and Panasonic, which go out of their way to offer the latest networking tricks, Internet services and Wi-Fi support at much lower prices, the BDS 800 simply can’t measure up. Harman probably ploughed the money it would have spent on these features into performance and build quality, which is great, but we still can’t help but feel a little miffed that we can’t stream media wirelessly from networked PCs. 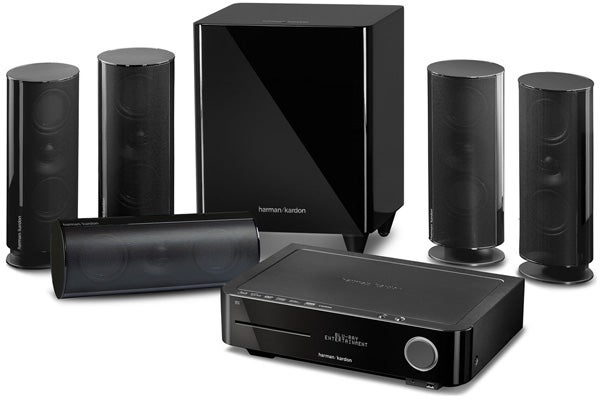 Therefore, the Ethernet port is only used to download BD Live content and upgrade the firmware. The USB port, on the other hand, can be used to play a range of digital media formats, including MP3, WMA, AAC, DivX, AVI, XviD, MPEG-1 and JPEG, although it wouldn’t play some of our 720p DivX HD files and doesn’t support MKV. There’s a helpful feature that allows you to add files from CD-R or USB to a playlist, which the unit will then remember when the media is loaded again.


Elsewhere, the BDS 800 offers a built-in FM radio, decodes Dolby TrueHD and DTS HD Master Audio and features Dolby Virtual Speaker technology, which generates a surround effect when using only the front speakers and sub. The BDS 5 receiver also features digital amplifier technology, which aims to deliver a potentially cleaner sound with fewer conversion stages than other types of amp. 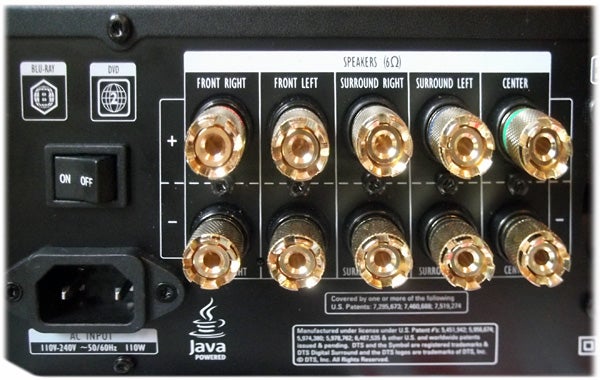 Inside the satellites are two 75mm flatpanel midrange drivers and a 25mm tweeter, with a 2.5-way crossover network, while the horizontal centre speaker features the same drivers and is voice matched to the satellites. The downward-firing sub boasts an 8in cone and a built-in 200W amplifier.


Setup is ultra simple thanks to the easily accessed binding posts and colour-matched cables, plus the exposed wires at the end are easy to insert into the holes. All the cables are supplied (in 4m, 5m and 10m lengths for the centre, front and rear speakers respectively) plus there’s a cable for the sub. 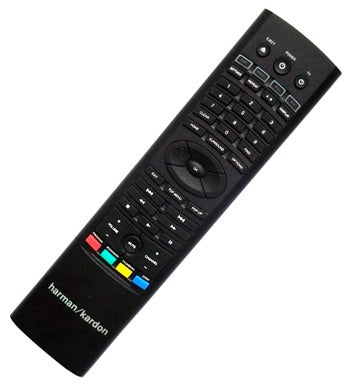 Once you’re set up, operating the BDS 800 is a piece of cake too. The Home menu uses crisp HD graphics, with a tasteful colour scheme and legible text. The cursor moves around without delay and the layout is intuitive – the first page shows the various functions in a list (USB, Blu-ray, radio), while the subsequent pages display clearly-labelled folders with details about selected files on the right. The Settings menu takes a similarly straightforward approach, and buried among its pages are tone controls, speaker settings, a selection of picture presets and a user-defined mode that allows you to alter individual picture parameters.


We’re also fans of the remote, most notable for its tactile, rubbery buttons and coffee-table friendly design. The labelling is a little hard to read and the OK button in the middle of the menu controls is tiny, but otherwise this is a well thought-out controller.

With a similar budget, you could put together a pretty impressive-sounding separates system yourself – for example, the excellent Sony BDP-S570 player, Onkyo TX-SR608 receiver and Teufel Theater 100 speakers would set you back about £1,200. All of which means that the BDS 800 finds itself up against some stiff competition and needs to work hard to justify that price tag. But guess what – it easily holds its own in terms of sound quality, knocking our ”Avatar” Blu-ray out of the park with an invigorating, polished and powerful performance.


What we look for when listening to a system is a smooth and palatable sound that doesn’t compromise on punch or dynamics, and amazingly the BDS 800 manages all that and then some. High-frequencies are gloriously crisp and detailed, refusing to sound hard or steely no matter how high the speakers are pushed. Take the Battle For Pandora scene, for example – the whirr of helicopter blades, the score’s brass section and the screech of banshees are all delivered with a clear, undistorted tone. 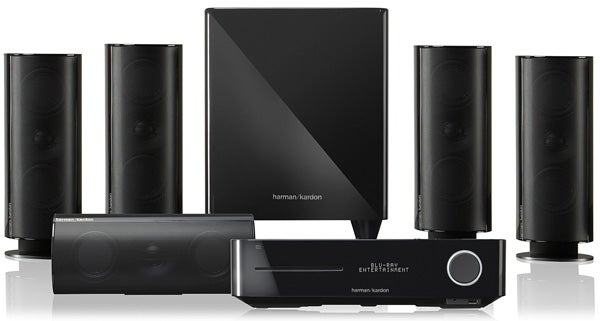 This superb clarity continues into the midrange frequencies, allowing for prominent dialogue expression even during chaotic action scenes. And at 65W per channel there’s plenty of power in the tank too. You can hear that in the thunderous stampede of Dire horses charging through the forest and in the meaty explosions as helicopters smash into the side of mountains. The sub takes these sounds in its stride, infusing them with just the right amount of depth and punch without falling into the trap of sounding boomy – one of the benefits of choosing an active sub over a passive one.


Meanwhile the clarity and precision of the rear speakers coupled with the BDS 5’s smooth steering makes for a thrilling surround experience, and because they’re voice matched to front and centre speakers you get a coherent soundstage that you can really lose yourself in.


It is, however, just a little brash for music playback – fine when playing loud dance or pop tunes but doesn’t articulate the finer details of delicate jazz compositions as well as some speaker systems we’ve reviewed of late. But that’s being picky, as the sound is still a cut above most of the budget systems that end up on our test bench.


As for pictures, we really can’t fault the crystal clear reproduction of ”Avatar’s” glorious 1080/24p images – colours blaze from the screen and detail looks razor sharp, just as it’s supposed to. It also sails through the Silicon Optix HQV disc, reproducing the jaggies and resolution loss test patterns with stability. It’s also surprisingly quick to load discs, taking around 40 seconds with ”Terminator Salvation” and 30 seconds to fire up ”Avatar”.


Overall, the Harman Kardon BDS 800 is an impressive home cinema bundle, bringing super-stylish design and seriously good sound quality to the table. It’s proof that one-box systems shouldn’t all be tarred with the same brush when it comes to sound quality – Harman’s Blu-ray playback is more akin to what you get from a separate receiver and speakers, thanks to the competent, detail-loving speakers and punchy sub. Yes, you’d expect nothing less at this price, but we don’t think anyone would feel short-changed after hearing it in action.


Where it falls down is features, as it lacks the bells and whistles found on cheaper systems from big names like Sony and Samsung. We’re talking about DLNA networking, built-in Wi-Fi, access to Internet content – those things would have taken the BDS 800 to another level. But if that sort of thing doesn’t float your boat and you have this sort of cash to splash then the BDS 800 is a terrific choice and a safe alternative to separates.