There is no shortage of cheap monitors these days, but if you want anything of a significant size you’re still going to have to put down at least £150 to £200 and even more for something of true quality. Moreover, with demand for LCD panels remaining exceedingly high this isn’t likely to change until at least 2009. So, until then, what’s your best option for a budget 22in monitor?


One option might be this Hanns.G HG216G, a 1,680 x 1,050 monitor with a full viewable area of 21.6 inches. Available quite readily for less than £150 it certainly qualifies as a budget option opening up the possibility of having two 22in class monitors on your desk for less than £300, which, when you think about it, is quite remarkable. It also features an HDMI port and though this can prove problematic when moving a monitor around due to the lack of grips, there’s little in the way of adjustability for this to be an issue. 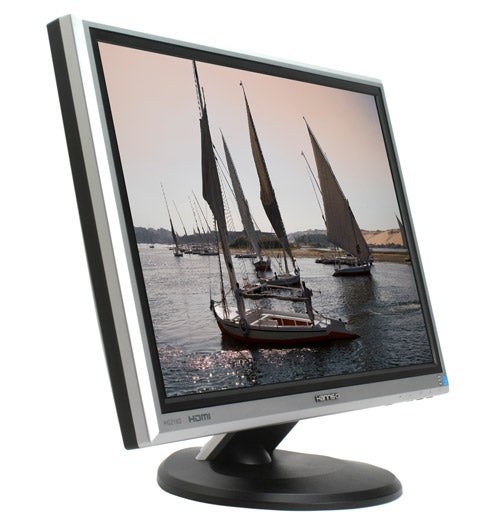 Indeed, design, both in terms of styling and adjustability, is obviously the first sacrifice in budget screens and this one is no exception. It’s certainly got a utilitarian streak to it, with the cheap looking silver bezel and black plastic accenting harking back to an age of industrial design that’s best forgotten. As for adjustability your only option is a degree of tilt, with not even swivel integrated into the base. Moreover, whenever you use of the OSD buttons to adjust the settings the whole display wobbles despondently.


Suffice to say then that the Hanns.G is every bit as cheap looking as its price suggests, though it’s not so bad that it can’t be tolerated. On the inside it features a fairly bog standard TN panel and Hanns.G quotes a 1,000:1 contrast ratio, 300cd/m2 brightness and a 5ms grey-to-grey response time – all of which is totally unremarkable. 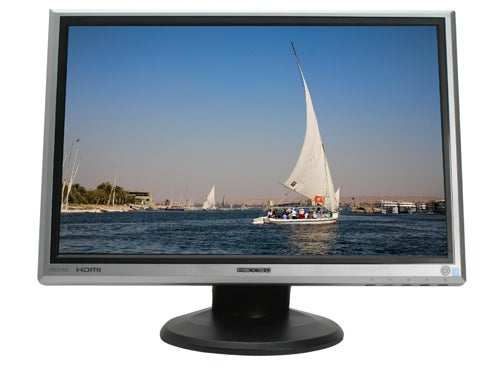 Connectivity, however, is more noteworthy due to the inclusion HDMI. This makes this a useful budget offering for someone who owns a PlayStation 3 or Xbox 360 Elite who wants to use their console in the bedroom but doesn’t have a display capable of connecting to them. In addition there’s also the ever present D-SUB port for an analogue video connection, while an audio input provides sound to the integrated speakers – they are rubbish, in case you’re wondering. Annoyingly, though, there’s no headphone output, which means you’ll have to find an alternative means of getting to the audio from the HDMI.

Given the budget focus of this monitor it would be too much to expect a lot of the image quality, but regardless it’s still important to see exactly how it stacks up against potential competitors. And, though it’s no high definition wonder, the Hanns.G is at least competent enough provided you have humble needs.


Starting with DisplayMate testing, the Dark-Grey Scale showed some compression of the darker end of the scale, with the darker greys fading into the black background. However, those that were shown were adequately produced, with little in the way of the nasty brown/yellow shading you sometimes see on even more expensive monitors. Much the same could be said of the White-Level Saturation test, with compression at the brighter end of the scale but neutral tones elsewhere. 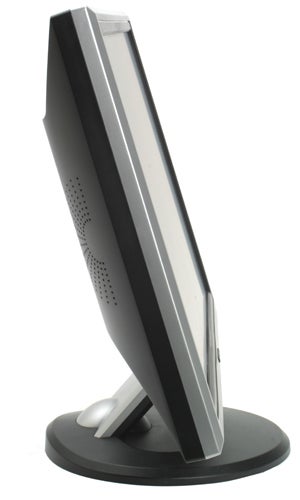 However, where the difference comes is in both the vibrancy and gradation of colours. Throughout use and testing it was plain to see that colours were predominantly dull and uninteresting, even the brightest shades. This also bore itself out in the lack of definition between different gradations colours, which reproduces itself as a lack of detail in images and video. As with the previous tests this was most extreme at the dark and light end of the scale, with low saturation colours and dark shades regularly indefinable.


Continuing through the testing also showed that text sharpness was an issue as well, with the 6.8 point Arial font merging into itself making it difficult to read. Above this it is fine, but it’s not a problem you often see in modern LCDs. Another notable quality issue is the dirtiness of the whites, which makes the display often look darker than it really is when reading documents and web pages. Unsurprisingly, black levels were also distinctly average, with a consistently washed out look during dark scenes. 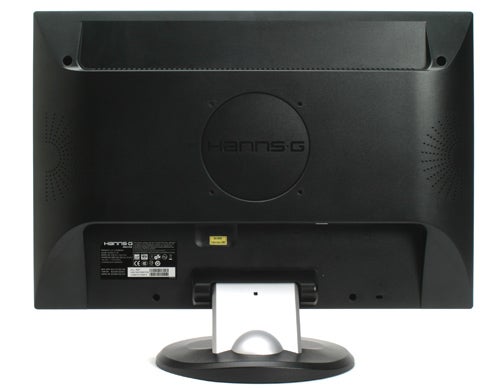 Ultimately, this combination of lack of detail, dirty whites and poor back levels means that whether you’re playing a game or watching a film, the HG216D will never bring these scenes to life in a way that’s truly immersive.


Despite this, it must be said that for the price this is a perfectly decent monitor. It may lack in aesthetic appeal but image quality is solid enough for most needs and compares favourably to more expensive examples available for around the £170-180 mark. Thus, if you’re on a strict budget this represents very good value for money.


What it lacks in style the HG216D makes up for in value and solid, if unspectacular, performance and features.