Confession time: back in the late eighties and early nineties I read a lot of rock and guitar magazines. It was a dark period – post-Appetite for Destruction and pre-Nevermind – and the pages were dominated by serious-looking, studio bound guitar gods and poodle-haired LA rockers who could all talk knowledgably about the applications of ‘sweep-picking’, ‘tapping’ and ‘dive-bombing’ while promoting albums we’d find virtually unlistenable today. Even at the time, there was a lot of debate about this approach. I remember one interview with a grizzled old musician whose name now escapes me where he moaned about the poodle-hair brigade and the way their obsession with technical skill was destroying what he saw as the important bit: the music. In his opinion, it was turning playing guitar into something more like a silly video game. 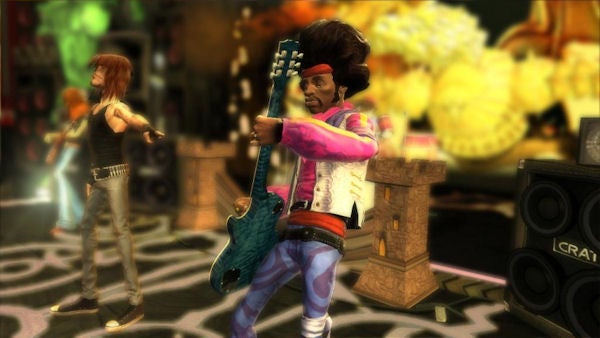 Playing Guitar Hero 3, I’m hit by how that argument seems to have come full circle. Struggling through tracks like Slayer’s Raining Blood or Eric Johnson’s Cliffs of Dover, you’re practically knocked back by how demanding on your fingers these fretboard workouts are, even when all you have to do is press five buttons and waggle a plastic bar in the right time and roughly the right order. You half suspect that these songs were never written for someone to listen to, but to give the hardcore Guitar Hero 3 player a challenge nearly two decades later. And if you want to hear the old grizzler’s worst fears borne out, you only have to listen to the Tom (Rage Against the Machine/Audioslave) Morello guitar jam you’ll encounter about one quarter of the way in. A bizarre collection of weird, hip-hop clicky noises with about a minutes worth of riffs shoved in the middle, it’s a compelling argument as to why you should never leave a virtuoso guitarist in a studio on his own for more than fifteen minutes. 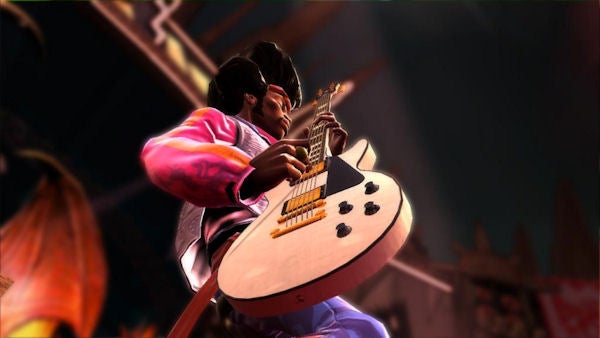 Interestingly, the same period – roughly 1987 to 1993 – seems to be a favourite for GH3’s new developers, Neversoft. As well as Raining Blood and Cliffs of Dover, we get Welcome to the Jungle, Smashing Pumpkin’s Cherub Rock, Metallica’s One, Living Colour’s Cult of Personality, Pearl Jam’s EvenFlow, Sonic Youth’s Kool Thing and The Red Hot Chilli Pepper’s Suck My Kiss. This means you may get more out of the game if, like me, you’re a man in his mid-thirties whose record collection once contained this sort of stuff. In fact, if it had Stone Temple Pilots, Kings X, Soundgarden and Alice in Chains in there, they would probably have had my old collection. Luckily, older guitar heroes can still get their fill in the shape of Cream’s Sunshine of Your Love, Santana’s Black Magic Woman, The Stones’ Paint it Black and The Who’s The Seeker, while younger ones get Muse’s Knights of Cydonia and The Killers’ When You Were Young. There are even a few optional brit hits smuggled in among the unlockable bonus songs, with The Kaiser Chief’s mighty Ruby and The Stone Roses’ She Bangs the Drums being obvious highlights. For such a diverse collection, it’s surprising how naturally they all fit together in the general GH scheme of things. 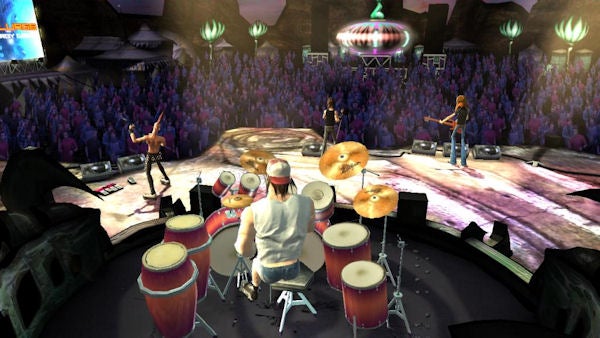 Factor in the fact that 51 of the game’s 71 songs are master recordings, and it should be clear that GH3 has cracked the most important aspect of the game: the setlist. There really is something for pretty much everyone, and an awful lot of it rocks hard. When You Were Young joins More than a Feeling and Killer Queen as a classic GH party track – not so difficult that you can’t play it when inebriated, but with the sort of epic quality that demands you play it from a standing position on the Sofa. Knights of Cydonia, meanwhile, is this year’s YYZ: the fiendishly tricky track that no GH show-off will be able to resist. 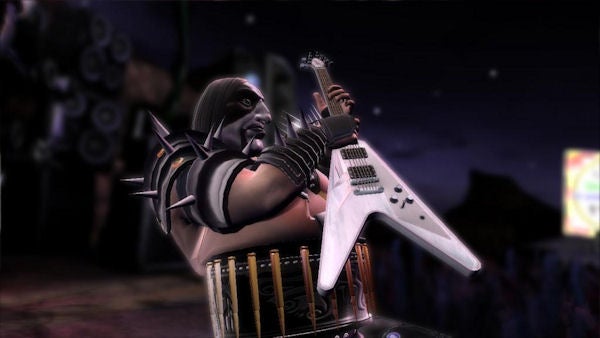 But how has Neversoft fared with the rest of the Guitar Hero formula? Well, with a few minor caveats, pretty well. In fact in some crucial areas it has actually improved on original GH developer Harmonix’s efforts. For one thing, the main career mode now hangs together far better than it ever did before. The characters and performances still ooze that old-school rock sensibility, but there’s now a sense of a slightly silly story unfolding, and one that cheerfully embraces every rock cliché you can think of. For another, the game’s major innovation – the boss battle – actually works pretty well. 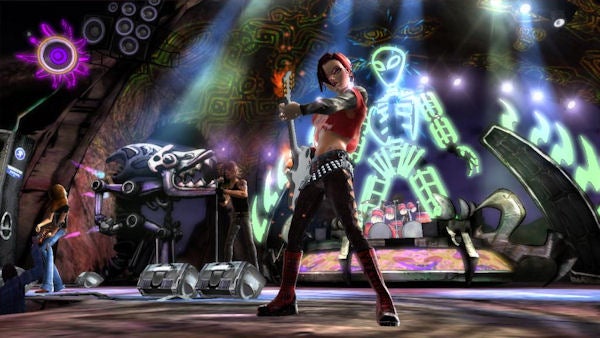 It works like this. After specific content a boss character will challenge you to a duel. Two sets of scrolling guitar tabs come on screen, and you play along with your parts in the piece as normal. However, instead of building up the star power gauge, the special star-shaped spots now allow you to dish out special attacks at a sudden tilt of your headstock. These unleash several effects that put your opponent off balance. Force him to slip through the red zone into disaster, and you’ve won the duel. Fail to do so, and it’s back to the good old retry screen. The duels are tricky and the songs – bar a final masterstroke – aren’t so great, but it’s definitely a fun addition to the franchise. 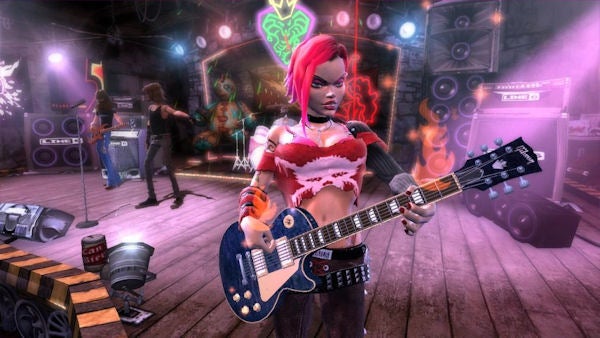 As far as difficulty goes, the curve isn’t quite as smooth as on previous Guitar Heroes, with a few nasty peaks and one absolute nightmare even in the Easy mode. Medium probably hits a better balance between feeling playable and getting close enough to the notes to give you that weird GH sensation that you’re actually playing the song, but here the peaks are still a little bit too scary. I suspect Hard mode will cause the most moans, not because the note layout isn’t logical, but because certain tracks are so fiendishly tricky that even GH veterans should be terrified. On the plus side, there is an awful lot here for them to chew on. The career now plays out over more chapters and gigs, with encores and boss battles adding a little extra drama to each one.

The visuals are easily the best they’ve ever been. All the old favourites – Axel Steel, Lars Umlaut, Judy Nails and Izzy Sparks – are back, but they’ve all been given more detail and a stronger range of animations. The concert presentation is a lot more dynamic, with camera angles that will be familiar to any devotee of late-eighties/early-nineties concert videos, and the lip-synching and lighting is a huge improvement over last year’s 360 port of Guitar Hero II. The only thing that makes you wonder is the increased quantity of, let’s say, T&A on display. As I remember from dubious rock videos, it’s always been a part of the hard rocking lifestyle, but did Judy Nails really need implants between GH2 and GH3? Did the shows really need ‘exotic dancers?’ Did Casey Lynch always wear so little, and was it always so strategically placed? 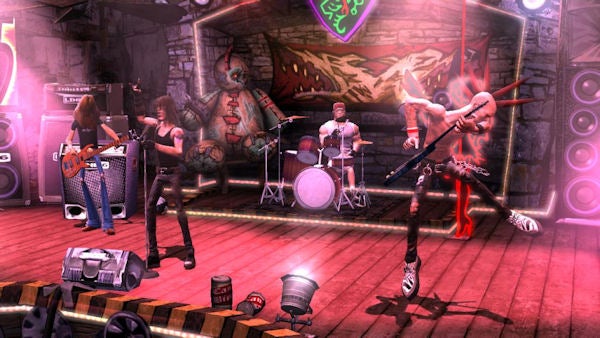 Now for the real kicker: longevity. As a solo game GH has always been slightly limited, and even with so many tracks and a huge range of unlockable characters, guitars, finishes and costumes that still holds as true as it ever did. Sensibly, then, Neversoft has enhanced the multiplayer mode by introducing a specially re-jigged co-operative career mode, with one player playing lead and another bass or rhythm, and including songs exclusive to it. The 360, PS3 and Wii versions also get online play, with a best-of-three tracks battle mode that makes it easy to find a quick duel or work your way up through the world rankings. It plays very slickly and – importantly – with little sign of lag, and blasting through The Beastie Boy’s Sabotage or Weezer’s My Name if Jonas against the competition and winning is a serious blast. Both these options should see the game last way beyond Christmas. 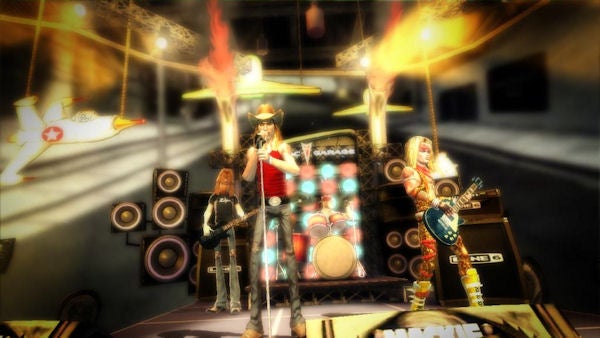 Downloadable content will also be important to the game’s long term play. The introduction of packs of tracks from Velvet Revolver and The Foo Fighters within the first few weeks of sale is a good sign, and who wouldn’t want to bash their way through All My Life or The Pretender? Let’s hope there’s much, much more to come.


Of course, there is one final reason to get GH3, and that’s the all-new, all-wireless guitar. Now modelled after Gibson’s legendary Les Paul (in the 360 version, at least), it feels slicker and stronger than the old SG or explorer models, and has a less toy-like or clunky style. Personally, I prefer it without the white stick-on scratchplate, but how you rock yours is entirely up to you.

All in all, GH3 is a much stronger game and product than it might have been. Guitar Hero: Rock the Eighties – this year’s glorified expansion pack – showed a series in danger of coasting, but with an excellent tracklist and a few clever tweaks, Neversoft has produced the most well-rounded and consistent Guitar Hero yet. It’s accessible enough to welcome newcomers, but gives those of us who have played all the way through the series our most fearsome challenge yet. We still need to see a little more invention next time around, especially once EA’s Rock Band makes its European debut next year, but I don’t think there are many games out there that will provide as much fun at parties and post-pub gatherings over the next few weeks. In short, the original guitar game still rocks – the only question is whether you rock hard enough to keep up.


The tracklist shines while the boss battles, online play and co-operative career mode make this the strongest GH package yet. This rock monster isn’t ready to be slain quite yet.