Up until last year, PC racers might have felt like they were having sand kicked in their faces by their console-owning cousins. Despite a handful of decent driving games, the PC had nothing that could really stand up to the likes of the PlayStation 2’s Gran Turismo or the Xbox’s Forza Motorsport, so if you were a fan of serious racing sims, you either made the best of TOCA Race Driver 2, or sat in a corner waffling on about the golden days of Grand Prix Legends. Pity the poor bloke in the corner of the pub mumbling about how Need for Speed was better before EA spoiled everything. He had good reason to be so sad. 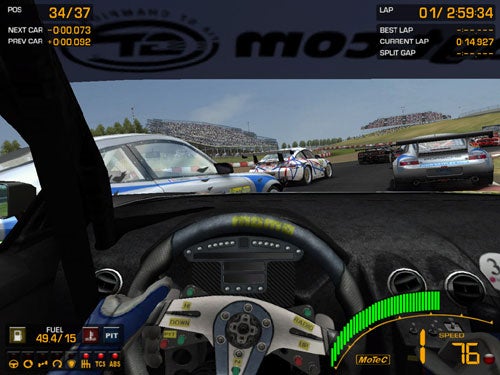 FIA GTR Racing changed that overnight. Suddenly, the PC didn’t just have a decent serious racing sim, it had arguably the most sophisticated on the planet. No matter how much Kazunori Yamauchi spouted on about the realism of Gran Turismo 4, nothing on a console could hope to match Simbin’s real-world physics masterclass running on a high-end Athlon 64. GTR Racing felt scarily real, its handling so fiercely demanding that it made you understand the gulf between racing a supercar on a TV screen and trying to keep the beast on-track in real life. Playing Gran Turismo was tough, but you could scrape by after a couple of hours. Playing GTR and winning took real nerve, real concentration and days of mastering driving technique.


And this – its biggest strength – was ironically its biggest weakness. For every motorsports fan that found in GTR the answer to his or her prayers, several others found it just too much like hard work. Where Gran Turismo and Forza were welcoming, easing you in with slower cars, easy championships and generous driving aids, GTR sent the message “get good or get out”. Sadly, the PC’s finest racing game was also its least accessible. 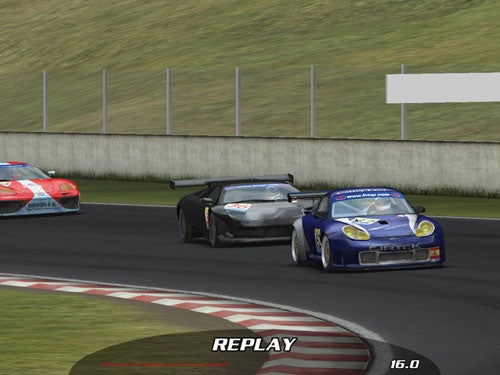 No longer. GTR 2 comprehensively addresses the accessibility issue, while doing nothing that might displease the hardcore following. It’s a tighter, better, more enjoyable game all round, and one that can stand up tall with any racing game on any platform. Maybe taller.


Its first major addition – lessons – is hardly a new idea: Gran Turismo has been boring novice players with a range of ditchwater dull tutorials for years, forcing you to play through them and win a license before you can really start racing. GTR 2 does things differently and much more enjoyably. The lessons aren’t compulsory – though you can’t access custom championships without completing some of them – and they’re actually short-lived and entertaining. In most cases, you’re simply asked to chase or beat an instructor’s car through a section or series of corners, and you’re rewarded with a Golden Gear when you do particularly well. As later challenges in each section are surprisingly tricky, the desire to beat each one in turn is surprisingly strong, resulting in tutorials so compelling that you don’t feel the pain so usually associated with learning. Better still, after the basics are over, you know everything you need to and can get to grips with the game itself. 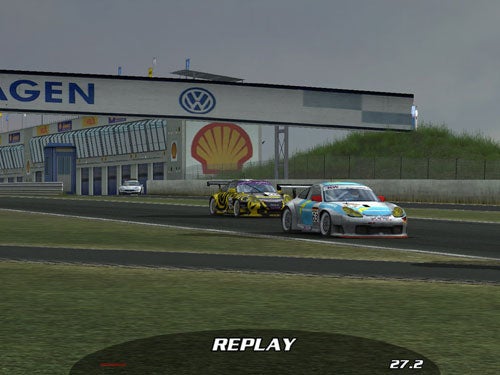 When you do make that jump, you’ll soon notice how useful the driving aids are this time around. There’s a wide range, from steering and brake assists to spin recover and traction control, and all are linked into the three levels of difficulty – Novice, Semi-Pro and Simulation – ensuring some are locked out as you progress. On top of these, the game throws in corner indicators and a racing line option, and while these aren’t as helpful as the dynamic aids in Forza Motorsport, they’re still very useful in the early stages of the game. 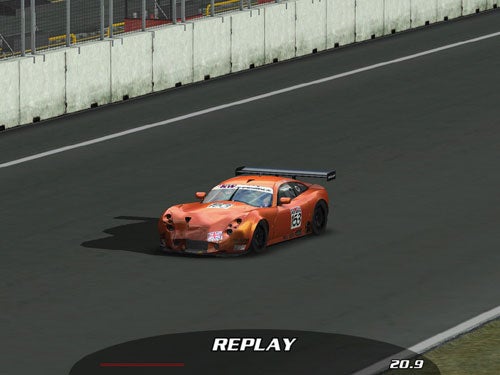 Even in Novice mode, with all the assists on, it takes a certain amount of practice before you get a podium position, or even get around the track once without a mishap. You might be well advised to spend time in the open practice or time trial modes before you think about racing against anyone else. However, get some experience and start learning the tracks, and before too long it’s possible to win. Take one of the early custom championships, dial down the opponent level and ramp the AI down from Real to Timid, and first place is actually achievable. Before long, you might even take on a full GTR season, facing the full-on mayhem of a packed field of 37 cars.


And that’s where GTR 2 gets you. You can start getting rewards within the first five hours of play, but within another five hours those rewards will start to feel hollow. You’ll want to reset the drivers and ramp up the AI to give you more of a challenge. You’ll want to up the difficulty level, or start playing without so many of the assists. You’ll want to be out there in the middle of those 37 cars with nothing but your own skills to keep you in the race. 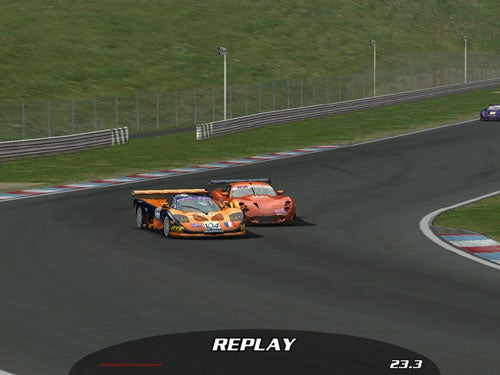 Why? Even with all the hand-holding switched on, this is a gritty, satisfying racer. With the kid-gloves off, however, it is one of the most visceral and challenging driving experiences around. As with GTR, the handling is exemplary; it’s tough to keep these beasts on the track, and if you play with a racing wheel and pedals – and you really should – you’ll be wrestling with the former and tap-dancing on the latter in a desperate attempt to keep tyres on tarmac through the corners, and hit maximum speeds on the straights. When you can do so without the dispiriting vision of the pack racing away into the distance, you feel like you’ve really achieved something. You’ll even start to notice how the handling changes over time, and while I’m really not one for those long-haul, 24-hour races, even I have to appreciate the way in which your tyres noticeable fail to grip as the laps mount up, making that pit-stop not an intrusion in the smooth flow of racing, but a necessity. 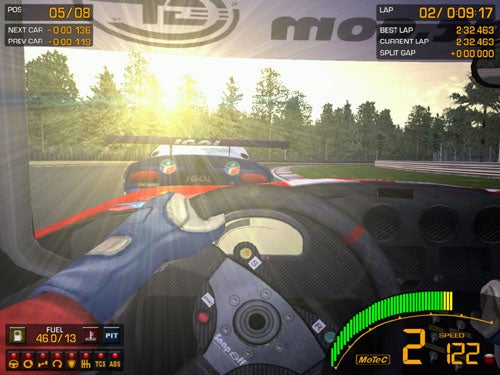 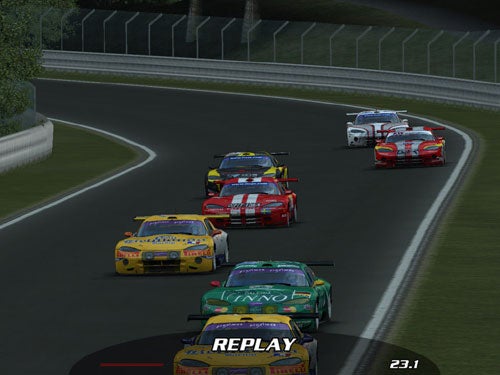 And this unparalleled feel is complemented by a higher-class of audio and visuals than the first could offer. OK, so GTR 2 is still a bit of a ‘Plain Jane’ in comparison to Project Gotham Racing 3 – let alone the glimpses we’ve had of Forza 2 and Gran Turismo HD – and, yes, it’s also true that it’s low on background eye candy. Yet the cars look gorgeous, the look is clean and precise, there are some lovely lighting effects and the textures are much richer and shinier this time around. The cockpit view, meanwhile, is fantastic, with masses of interior detail on display and a camera that throws you all over the place in quite sickening fashion as you tear around the track. Play on a big monitor, and you can really feel that you’re slap bang in the middle of the race.


In fact, double that if you’re listening through decent speakers or headphones, as the audio is up there with Forza or TOCA Race Driver 3 in the immersion stakes. The boom, scream and splutter of eight engines is mildly terrifying in the early competitions. Multiply that up to 37 in the full championship and you have a delirious racket that will be music to the ears of the motorsports fan. 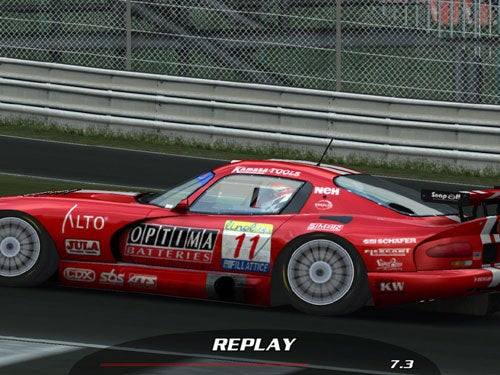 There are still areas here that need some work. The interface is slightly ugly and horribly confusing, to the point that it threatens to undo some of the good work and put newcomers off. There’s also a feeling that, without the “buy cars to win races to earn money to buy cars” dynamic that has always made Gran Turismo so compelling long-term, you’re left with only the occasional unlocked car on completion and the lure of a championship win to keep you playing, though the online play should keep your interest. Finally, I’d have to say that, if you only want to dip your toe into the motorsports water, TOCA Race Driver 3, while less sophisticated and slightly worse looking, is actually a more welcoming and varied package.


But all of these things pale into insignificance against what Simbin has achieved here: GTR 2 is one of the three best driving sims on the market, and a game that almost anyone can enjoy. Isn’t that something PC racers should be more than proud of? 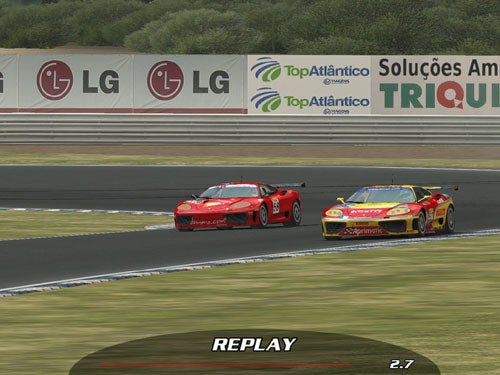 
GTR gave the PC an answer to Gran Turismo, now GTR 2 makes that answer fun to play. One of the three best driving sims on any platform.