What is the Gtech Falcon Cordless Lawnmower

Gtech’s cordless mower promises an epic 40 minutes’ run-time and a 43cm cut. That is the equivalent of mowing nearly one-and-a-half tennis courts before stopping for strawberries and cream. The Falcon is light and easy to manoeuvre, folds down for storage and is supplied with battery and charger as standard.

Easy to push around and offering great run-time, the Falcon is ideal for small to mid-sized lawns. Minor design niggles on the switch and handle annoy but aren’t deal-breakers, and the cut finish is great. At a relatively attractive price including battery, the Gtech falcon is a good choice. 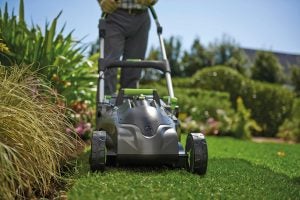 Gtech is best known for its range of vacuum cleaners, but the brand has turned its hand to several gardening tools of late. The Falcon is its first lawnmower. It’s cordless battery operated and looks pretty darn cool in its grey and fluoro-green livery. Unusually for this category, it comes with a battery and charger as standard, making it very competitively priced, too. 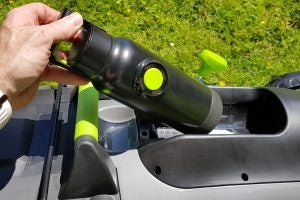 The Falcon is a push-mower with a very respectable 43cm cutting width, thanks to a traditional rotary blade. That can be removed for sharpening, straightening or replacing, although no tools are supplied for the job.

There are six levels of height adjustment. These range from an 80mm rough cut to billiard-table low 30mm, operated by a well-balanced lever on the side. The grass collecting bag is a generous 40 litres in capacity and has an indicator that flips up when the bag is full. It also flips up when the bag mesh begins to clog after just a few mows, which isn’t as useful. 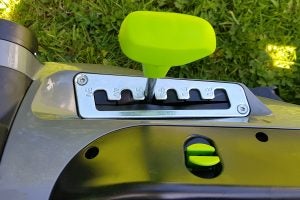 Power is provided by a 36V battery pack in a funky bottle shape. It clips neatly into the top of the mower’s body and has four green LED segments that let you know the remaining charge.

Down by the height-adjustment handle is an activation key that should be removed to disable the mower for storage. It’s a simple plastic clip, so offers no theft security per se, but should stop the kids mowing down your bedding plants – or each other. 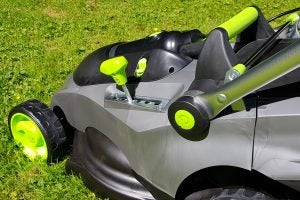 The aluminium handle shrinks and extends telescopically and folds down for compact storage. Fully raised and secured with a lower locking clamp, its overall handle reach is comfortably low, so ideal if you’re not too tall. Controls are an unlock button on the right side of the handle, which releases the pull wire-lever to start. 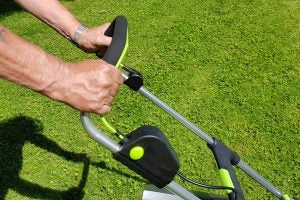 Despite its generous 43cm cutting width, the Falcon is fairly light, weighing in at just below 17kg with the battery attached. Build quality is fairly robust on the mower itself, but letdown by the handle and switch gear.  The aluminium telescopic handle flexes rather alarmingly if you try to tilt the machine, and the wire lever switch had multiple issues (see handling and performance section). 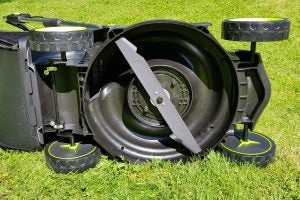 The ABS plastic cutter deck and main body feel solid, and the deck shrugged off several heavy collisions with part-buried obstacles. The Falcon is topped with a convenient carry handle on top and a handle moulding at the front of the cutter deck, making it easy to carry. 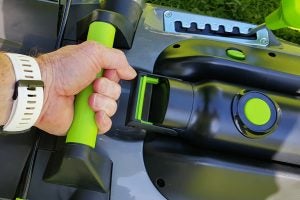 Top line claims for the Falcon are up to 40 minutes run-time from a five-hour charge. In a best case/low grass/no obstacles scenario, that will mow close to 400sqm of lawn, claims Gtech. In our tests, these claims aren’t too far off the mark!

The key to this range is the generous capacity of Falcon’s 36V bottle battery at a whopping 4Ah (4000mAh). You get one battery supplied with the Falcon as standard, but a second battery to extend your cutting time will set you back a fairly hefty £149.99. 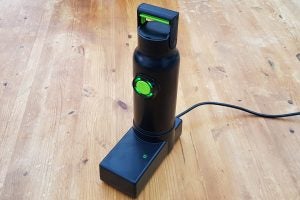 The charger is somewhat less impressive and is a basic cradle with a meagre 1.0Ah charge output. That’s clearly going to be a very slow charge rate and, sure enough, it was close to five hours before all four battery indicator segments were illuminated. Even if you had a second battery, the large run-time to charge-time difference means you can’t keep cycling batteries for near-continuous use.

Over several weeks of testing, we regularly managed around 35 minutes of mowing from the Falcon. With neat, fairly low grass and at 34cm cutting width, the coverage is very good indeed for a mower at the more affordable end of the cordless spectrum. 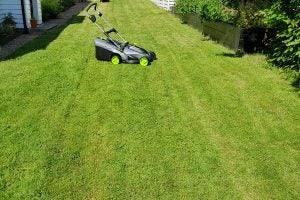 Run-time does drop off if the going gets tough, however. Plough through thick meadow grass and weeds and you can shave 5-8 minutes off your mowing time before a charge is required. In such thick foliage, or if you scalp a raised lump in the ground, the blade slows dramatically.

This isn’t unusual with cordless mowers since the motors are designed to favour run-time over torque, but it does take a little getting used to.

Aside from the woefully slow charger, the Gtech offers very good run-time and great coverage per charge with its 43cm cut. 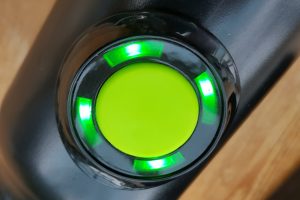 The Falcon’s lightweight and easy-rolling large wheels make this a very easy mower to use and navigate. On flat lawns, you can all but trot along behind it and we even managed to mow a really awkward 30-degree bank with relative ease. The handle is a nice height and well-shaped to grip, and the machine is light enough to tip back onto its rear wheels for sharp changes in direction.

My octogenarian mother veritably hurtled around the lawn with the Falcon. She found it very easy to use and equally easy to empty, if she didn’t let the bag get too full and heavy. The textile handle on the rear of the bag is a neat touch to help emptying here. She declared herself ‘mighty impressed’. 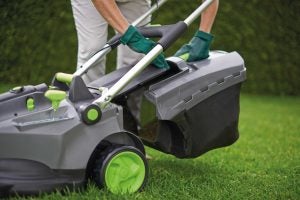 The cutting height gauge was on the low side, so unless you have a putting green for a lawn, you probably won’t use the two lowest settings. If you do, don’t expect all the grass to be collected. The cutting deck is a simple dome, and if it gets too close to the ground then it stops air being sucked in. That stops grass clippings being ejected into the bag and leaves them on the ground. 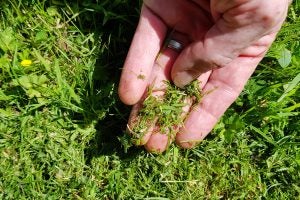 On rougher grass and taller cutting heights, cut finish was very good thanks to a traditional mower blade and high-speed rotation. The machine’s light weight ensured it didn’t leave wheel track marks. There’s no rear roller option if you like stripes, however. The following image is cuts at (L to R), the 60, 50 and 40mm settings. The 30mm setting created mohican-level scalping on our rough lawn. 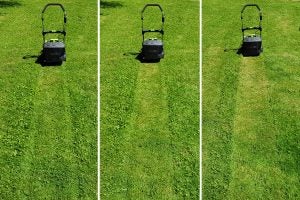 As I collided heavily with the remnant footings of an old iron shed, I can certainly vouch for the robustness of the ABS cutting deck. It’s simple design also makes for easy cleaning: simply lay the mower over and hose out the deck. 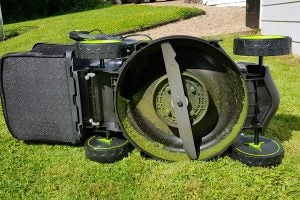 Yet, as testing continued over weeks, some of the Falcon’s shortcomings and design issues began to make themselves felt. Our main problem was the wire switch lever. The lever itself is flexy and is simply push-fit, inserted into the plastic switch socket. The angle that you operate the lever pulls the wire clean out of the switch socket. That quickly became annoying. If we owned this mower, we’d use some good epoxy glue and stick the thing in. 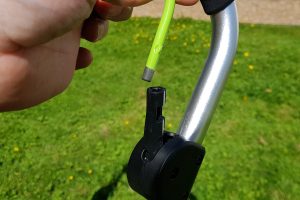 The lever was never right, though. Its flexy nature means you have to pull it right into the bar and often a little beyond to engage the switch and start the mower. As our grip relaxed a little during mowing, it would often switch itself off.

The very flexy aluminium handle doesn’t help here, either. Try to steer by tilting the machine or hold it up to stop wheels dropping off a grass border, and the handle twists alarmingly. It never broke through testing, but its flexy nature does make awkward tasks – floating over edges, for example – even more awkward.

The bag-full indicator was next on the niggle list. It would pop up even if the bag mesh was just lightly dirty; it was eventually up all the time the mower was running. 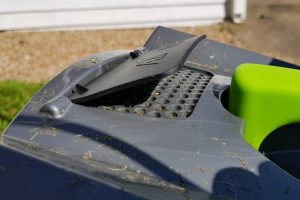 Other issues included the bin flap being almost the same height as the handle’s mid-brace, which would catch fingers nearly every time. 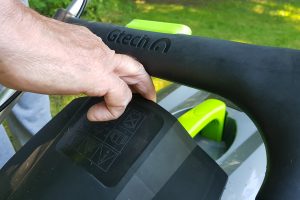 The out-of-the-box cable routing down the handle wasn’t particularly clever, either. Every time we collapsed and re-extended the handle, the cable would stay in a loop that would foul the bin flap. We modified that one with some insulation tape. 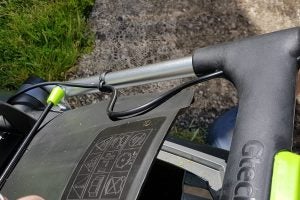 Overall, the Gtech Falcon is a handy cordless mower, which is lightweight with a good cut and solid run-time. Yet the lack of mulching option and a number of design niggles – that you just won’t see on models from established mower brand – do underline the fact that this is Gtech’s first mower. It’s good, but not great. 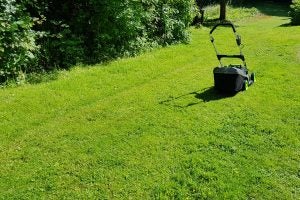 The Falcon is a neat, compact, lightweight cordless mower offering a great cut and excellent run-time of almost 35 minutes on good lawns. With a large-capacity battery and charger included, it looks good value too.

Its faults are minor but many, however. These include woefully slow charging, poor switch-lever design, a very flexy handle and a bag flap that wants to pinch your fingers.

None of those issues are deal-breakers, though, particularity if your usage is likely to be light and you’re careful. It isn’t a mower for manicuring billiard table lawns or hacking down seriously rough meadow, but for the average UK lawn, complete with dandelions and bare patches, it works a treat.

Gtech’s first battery-powered lawnmower isn’t without its niggles, but it remains a good-value lightweight model with plenty of run-time for small-to-medium lawns.