Humax’s fantastic FOXSAT HDR has had a monopoly on the Freesat+ PVR market for over a year but as we roll into 2010 other companies are starting to muscle in on the hard-disk hi-def action.


This high-definition capable box from Grundig, as well as models from Goodmans and Sagem, are giving Humax some much-needed competition (always a good thing for consumers) but Humax is still in a very strong position. Its year-long head start has established it as the Freesat PVR to beat, and in that time its online price has fallen to an irresistible £240 – all of which means that any challengers need something special up their sleeves to justify higher launch prices. Is Grundig’s GUFSDTR500HD up to the task?

The first thing to point out is that the DTR500HD (which is what we’ll call it from now on) boasts a bigger hard-disk – 500GB compared with the Humax’s 320GB – which holds up to 125 hours of high-definition TV or 312 hours of standard definition. That accounts for the Grundig’s higher price, but if you don’t need that much space and want to save a few pennies then a 320GB version is also available (for about £249.99, depending on where you look).


It’s pleasing to see that Grundig has put some effort into the box’s design. In fact, it’s a bit of stunner, boasting a fashionable gloss-black finish, a cool, curvy fascia and a minimal array of buttons, all of which makes it much prettier than the Humax. That said, at 290mm wide it might look a bit mismatched when stacked on a Blu-ray or DVD player, and the lack of a front panel means you’ll need to consult the onscreen displays for all the info.

On the back there’s a healthy selection of sockets, including two LNB inputs, an HDMI output (which supports 1080i, 720p and 576p), twin Scart outputs plus optical and coaxial digital audio outputs (able to feed a Dolby Digital bitstream to your AV receiver). There’s also an Ethernet port, which has taken on even greater significance since the launch of the BBC’s iPlayer beta trial (reviewed by John) as it means you’ll be able to connect to the internet and access the Beeb’s library of on-demand programmes. However, you will have to wait for the service to launch properly as the DTR500HD can’t access the beta (it’s exclusive to the Humax FOXSAT-HD and HDR).


Also on the rear is a USB port which can only be used to manually upgrade the unit’s software. Sadly you can’t use it to upload files onto the hard disk or dump recordings onto an external HDD as you can on the Humax FOXSAT-HDR, putting this box at a disadvantage in that respect.

Inside the DTR500 are two DVB S2 tuners, which like any twin-tuner PVR allows you to watch one channel and record another or record two channels simultaneously while watching a recording from the hard-disk. Try to record a third channel while recording two others and an onscreen dialogue box lists the various options open to you in plain English – a helpful feature. You can of course watch and record hi-def channels, which at the moment are limited to BBC HD and ITV HD on Freesat.


You get all the usual features like Pause and Rewind Live TV, Audio Description, digital text, Series Link and Split Recording. The box is also able to receive and decode Dolby Digital Plus soundtracks. 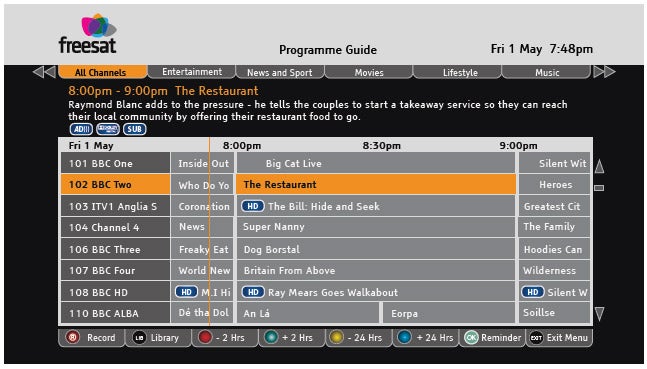 Installation is easy. After you’ve screwed in the LNB cables and hooked up your HDMI, boot up the box and a menu screen invites you to punch in your postcode (so you get the correct regional channel variations) and TV aspect ratio, then it searches for the channels. At the end you get a summary telling you how many channels it’s found.


If you want to add non-Freesat channels, then activate the ‘Show Non-Freesat Channels’ option in the setup menu then perform a manual search by keying in the relevant frequency, symbol rate and LNB polarisation. Once found, these channels can only be viewed in the Channel List and not from the EPG. That’s better than not having them at all, though. 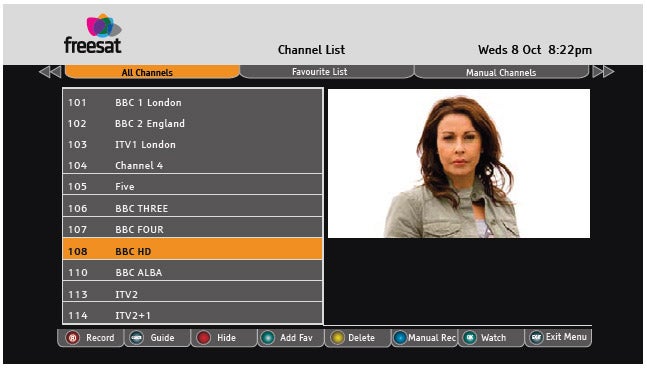 In general the Grundig’s onscreen menu design is highly impressive – clean, uncluttered and eye-catching. Generous use of strangely familiar icons, crisp text and bold colours ensures an engaging and hassle-free user experience. There are those who’ll moan that it lacks the intuitiveness of Sky’s latest EPG, and although that’s true you’ll still be hard-pressed to fault it.


The 8-day EPG is easy to follow and surprisingly uncluttered, despite cramming in a grid of eight channels, programme synopses, genre tabs and colour-coded instructions along the bottom. That doesn’t leave any room for a live TV box though, which is a shame. But a more annoying omission is that you can’t select Series Link when you set a programme to record – instead you have to zip over to the library, find the programme you’ve just scheduled and hit the green button, which is too long-winded. We’d have preferred a pop-up box giving you the Record Once/Record Series options straight away, like Sky+. 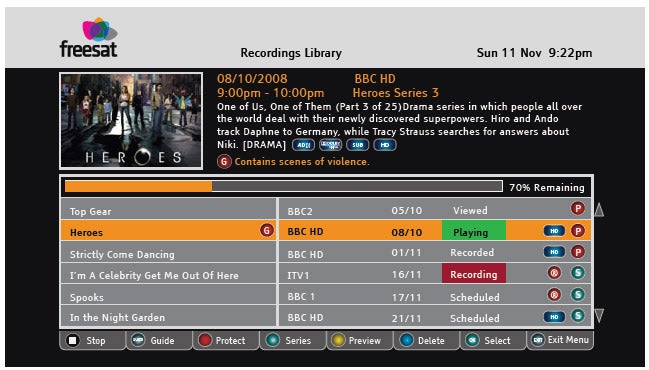 The Library menu is excellent. All of your recordings are clearly listed with their full titles, while live TV plays in a box in the top left corner. A neat Preview feature lets you play the recording in the box and all of the main functions are helpfully listed along the bottom. Interestingly, this screen also doubles up as the timer schedule list – all of the programmes to be recorded are listed at the bottom. It’s a shame you can’t record from the buffer memory, but otherwise the DTR500HD offers a decent range of recording features.

The setup menu is equally straightforward, using attractive icons and a logical structure, although the use of Fwd/Rev buttons to move across the submenus takes a little getting used to. Our only real grievance concerns the remote, which is uncluttered and ergonomically shaped, but the decision to put the channel change keys right at the bottom is a curious one. Every time you want to flick through channels it involves an awkward repositioning of your fingers. The EPG and Library buttons could do with being a bit higher too, but on a positive note, the menu and playback controls are comfortable to use. 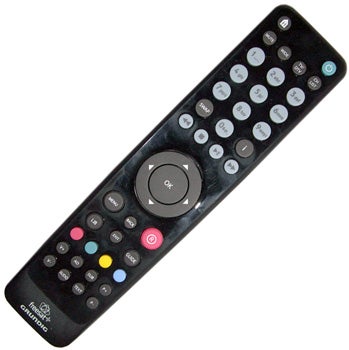 We tried carrying out a variety of tasks with two channels recording simultaneously and the Grundig doesn’t lock them out like some PVRs do – you can delete recordings, browse the EPG and pretty much anything else. Elsewhere, it’s a little slow to change channels but most other tasks are carried out instantly, such as one-touch recording, hard-disk playback and fast forward/rewinding.


Through its HDMI port the Grundig delivers picture quality that’s as good as, if not better than, the Humax. We had a sample of the Humax to hand and after comparing like for like (using Deal Or No Deal on Channel 4 and some epilepsy-inducing kids’ programmes on BBC One) we found that there were fewer artefacts on the Grundig, although we’re talking marginal amounts.

In general the Grundig’s images are crisp and bursting with vivid colour, plus motion is free from judder. It also sidesteps the hazy stepping effect that can also plague some Freeview boxes with 1080i upscaling. Recorded programmes show no sign of deterioration compared with the live broadcast, which is pretty much all you can ask of a digital TV recorder.


High-definition material is even more impressive. A variety of shows on BBC HD from, Doctors to Gigglebiz, looked mesmerising – bright colours are reproduced with satisfying depth and vibrancy, while the picture looks sharp as a box of tacks. And sonically we can’t fault the Grundig either, as every channel we tried is clear and dynamic through any of the outputs.


Behind the attractive exterior, the GUFSDTR500HD is a fairly basic Freesat+ PVR – it doesn’t go beyond the call of duty like the Humax, which includes USB functionality among its impressive roster of features, and it’s cheaper to boot. But the Grundig does carry out its core duties very smoothly – we’re big fans of the onscreen design in particular – while the large hard-disk capacity should suffice for most telly addicts. Grundig could do with re-jigging the remote on the next version though.