Five years ago writing reviews of digital cameras was very much easier, because there was a far wider variety in style, specification and quality. There was a large number of appallingly bad cameras being produced, and relatively few really good ones.


Now however the situation is reversed. The vast majority of digital cameras are very good, so writing a review tends to become an exercise in nit-picking, finding small faults in otherwise excellent products. While there are still some extremely bad cameras around they are usually instantly recognisable and easy to avoid, while nearly all of the cameras produced by the big name brands are safely above mediocrity. It is with some relief therefore that I come to write this review of the latest model from the well-known Goodmans brand. In a market filled with cameras ranging from the superb to the merely adequate the G-Shot 3027TFT comes as a refreshing change. 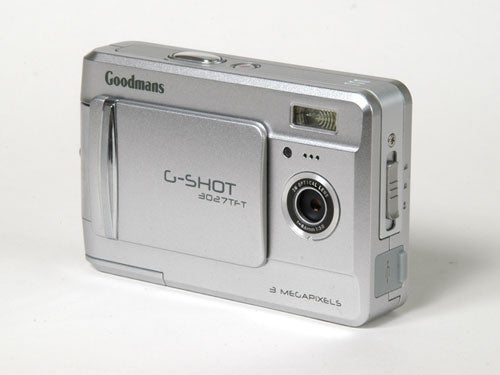 To provide some mitigating evidence in its defence, the G-Shot 3027TFT is a very cheap camera. Like a lot of Goodmans-branded home electronics it is sold primarily via catalogues such as Kays or Great Universal, and is priced at just £59.99, which is pretty cheap for a 3.1 megapixel digital camera. Included in the price is a carrying case (well, a cloth bag with a drawstring), wrist strap, USB cable, software CD with a copy of Ulead Photo Explorer 8.0, a couple of Duracell AAA batteries and a reasonably good manual. The 3027 is also extremely compact, comparable in size to the Pentax Optio S5n. It is easily small enough to slip into a shirt pocket for a night out.


To continue in a positive vein, build quality is also not at all bad. The case is silver-coloured plastic, but it feels quite solid and well-made, and the controls are solidly mounted and quite durable. Cameras of this type are cheaply mass-produced, most likely in Indonesia or Malaysia, but the G-Shot is apparently made to Goodmans’ own design and specification, so some degree of quality control is presumably taking place somewhere along the line. The overall design is quite attractive, and the initial impression is generally positive. 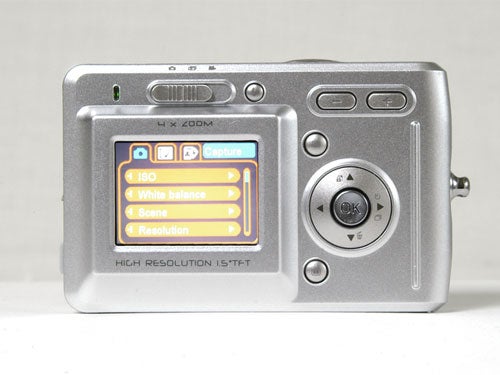 The 3027 has a sliding lens cover on the front, but unlike most other cameras with this feature it does not double as a power switch. There is a separate on/off button on the top plate which must be pressed and held for a second or so to switch the camera on, yielding a start-up time of approximately three seconds. The lens – always the most important part of any camera – is extremely small, just 3mm in diameter. I have seen mobile phone cameras with bigger lenses that this. The maximum aperture is apparently F3.0. There is no autofocus, instead a three-position slider switch on the left side of the camera selects between macro mode, normal shooting and landscape, which is presumably an infinity setting. 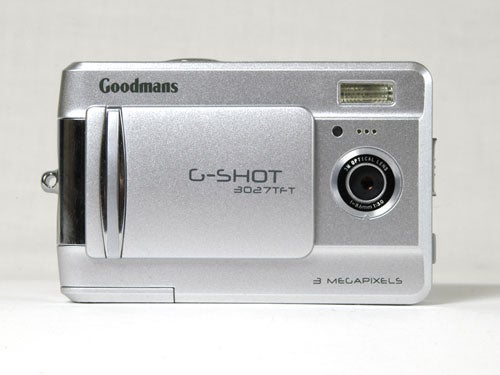 Above the lens is the smallest built-in flash that I have ever seen. Its maximum range is not stated in the specification listed in the manual, but practical use revealed that it was ineffective at ranges greater than about one metre. The default flash mode is off, and it resets to this every time the camera is turned off or switched to playback mode, which can be very annoying.


On the back is a small 1.5in LCD monitor screen, which is described as “High resolution”, so obviously someone at Goodmans has a sense of humour. The screen is very dark in shooting mode, and has no brightness control. In low light it proved to be impossible to see anything at all, while in bright sunlight there is so much reflected glare that it is very difficult to use. 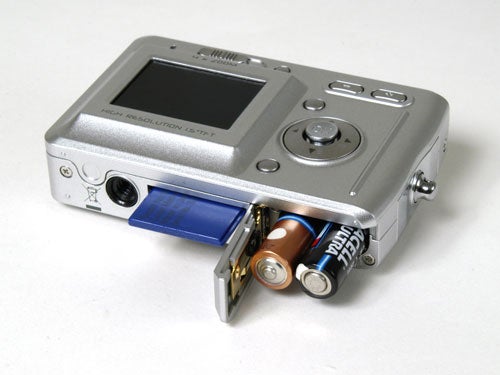 The controls, although well mounted, are unpleasant and fiddly. The main menu control is a particularly nasty joystick-type device which is awkward and uncomfortable. A small three-position slider switch above the screen chooses between shooting, playback and movie mode, and three small buttons control flash mode, display mode and activate the main menu. The labels on the controls are tiny and indistinct to the point of being virtually illegible. The grey-on-silver colour scheme means that the labels are completely invisible in dim light, so it’s just as well there are so few of them to remember.


For a budget camera the 3027 has what looks at first glance like a surprisingly complete menu, which leads me to think that it has probably been borrowed from a different camera with a higher specification. There is an option to set the ISO, but the only choices are Auto and 100 ISO, which is obviously pointless. White balance can be altered, but there are only five settings. There is a selection of scene modes, including portrait, scenery, sunset, “old day” (sepia) and black and white, but they are very crude and produce quite unpleasant results. The sunset option just adds a nasty red colour cast to everything.

There is EV adjustment available, but it is right at the bottom of the list. There are a couple of notable things to be found in the menu. One is an option to use the 3027 as a web cam when linked to a PC via its USB cable. More bizarrely, the third page of the menu contains a Tetris-like game and a lottery number generator. Yes, this camera can help you win the lottery. 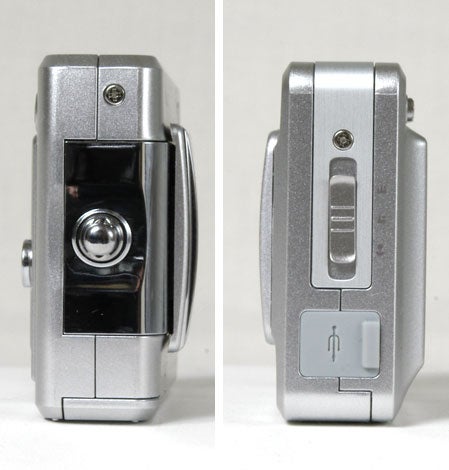 This is just as well, because it’s almost useless for taking photographs. It has a shutter lag of almost two seconds, longer if the flash is used, a delay which quickly becomes frustrating. Picture quality is frankly appalling. Shots are grainy and lacking in detail, colour rendition is hopelessly inaccurate, and there is a major problem with image noise in all conditions except bright sunlight. Low-light flash shots have so much noise that they look like a pointillist painting.


The tiny fixed-focus, fixed-aperture lens simply can’t produce the kind of detail or contrast to make a worthwhile 3.1 megapixel image, and also suffers from bad distortion around the edges of the frame. On at least two occasions, the camera also produced a bizarrely warped image which I am at a loss to explain. Also on two separate occasions the camera completely locked up in playback mode and could not be switched off. The batteries had to be removed and re-inserted to get it working again. Talking of batteries, the 3027 runs on 2x AAA batteries which only last for a few of hours of normal use. I was able to take about 70 shots, some with flash, before they gave out. 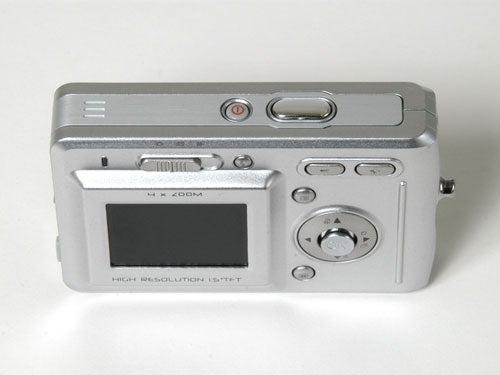 
Although it may appear to be a bargain at only £59.99, buying the Goodmans G-Shot 3027TFT would be a false economy. Slow start up time, long shutter lag, poor handling, badly labelled controls, poor battery life, occasional crashes and utterly execrable picture quality make this a camera that is best avoided, except possibly as a novelty gift for a child. If you are looking for a cheap camera, save up another £30 or so and buy an Olympus C-180 instead. 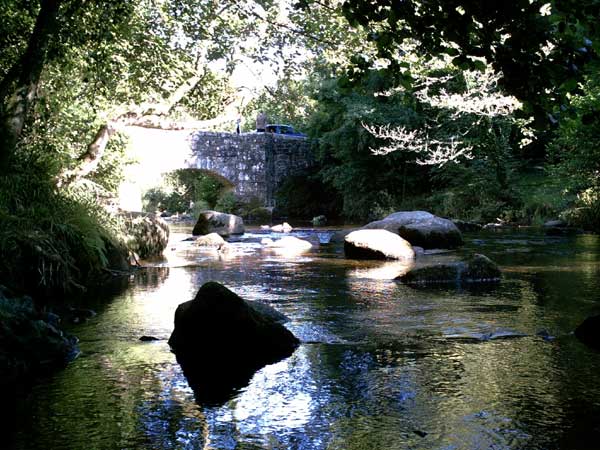 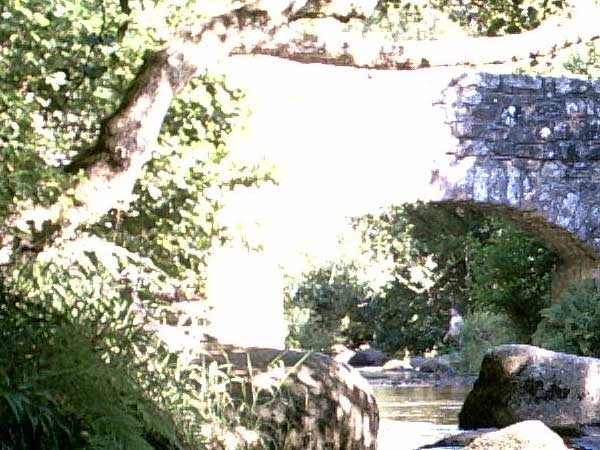 The relative lack of image noise is the only good thing about this picture. This was taken on the Auto ISO setting. The actual figure is probably around 50 ISO. 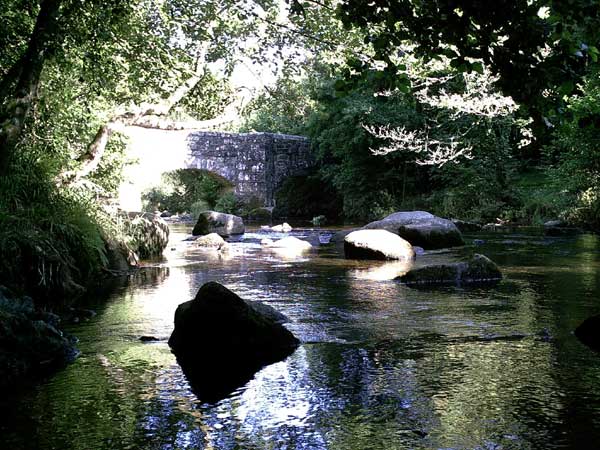 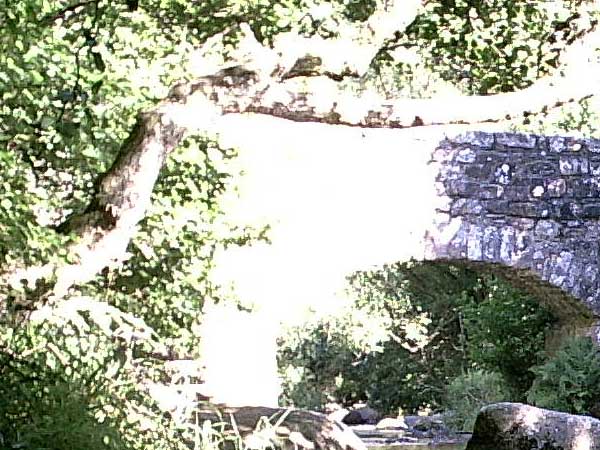 At 100 ISO, the only other setting, there is still no image noise. However there are burned out highlights, featureless shadows and lousy colour rendition. 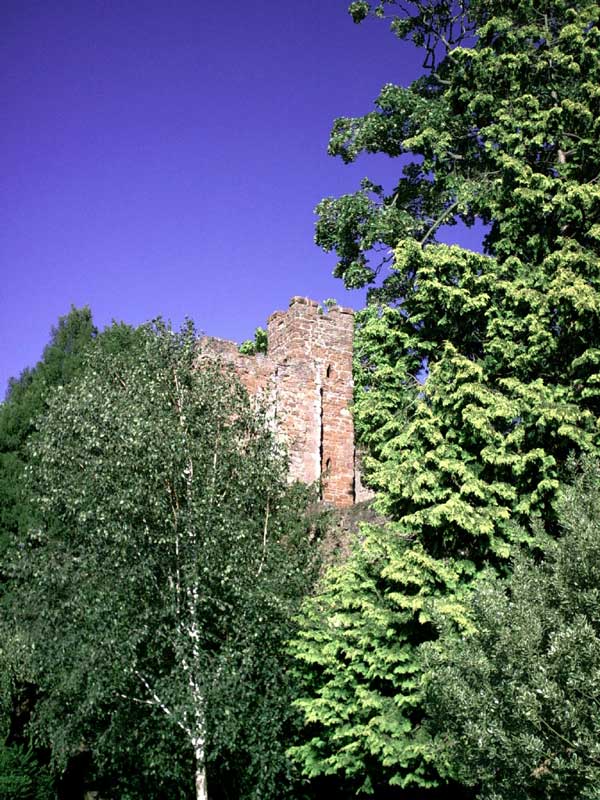 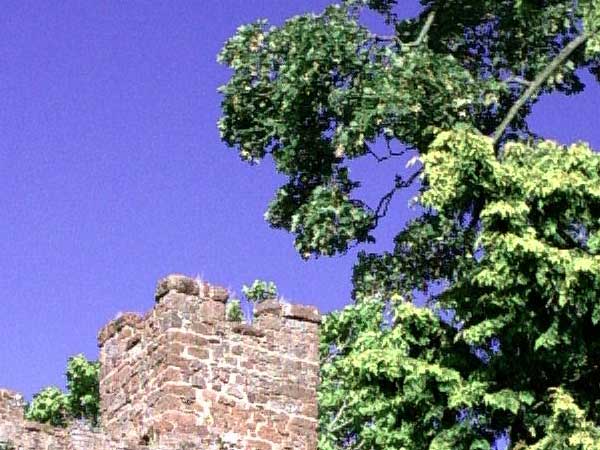 At normal zoom, this shot still lacks detail and is also over-exposed, but on the whole it’s not too bad for a £60 camera. 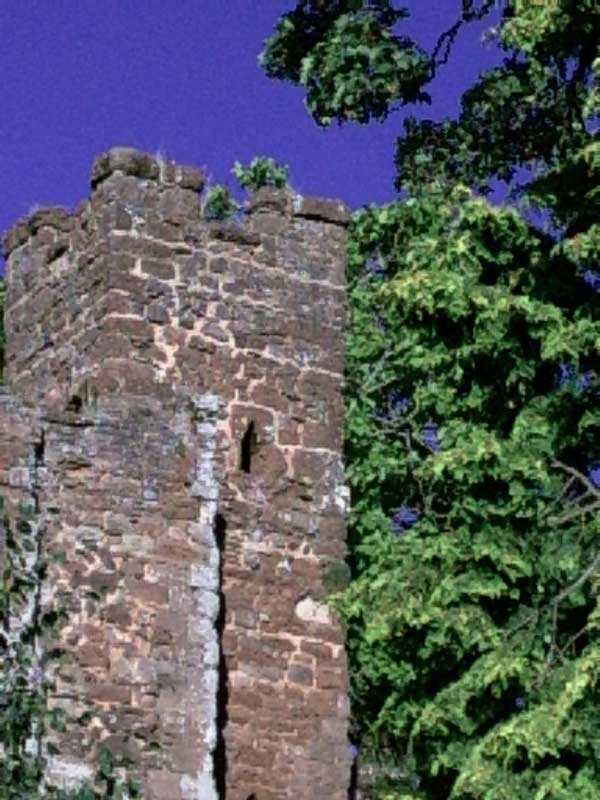 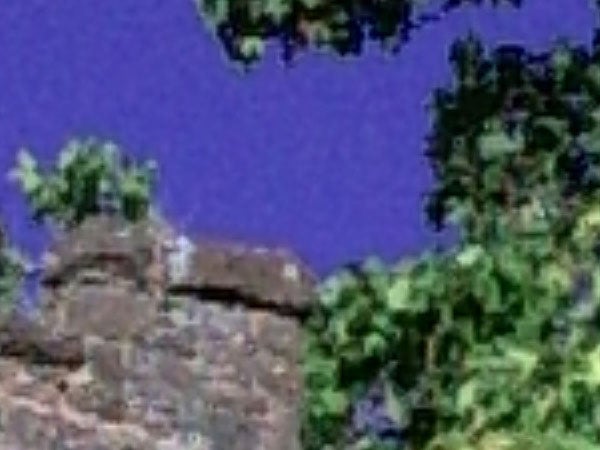 At the maximum 4x digital zoom, the picture is horrible in far too many ways to list. Just look at it. Urgh! 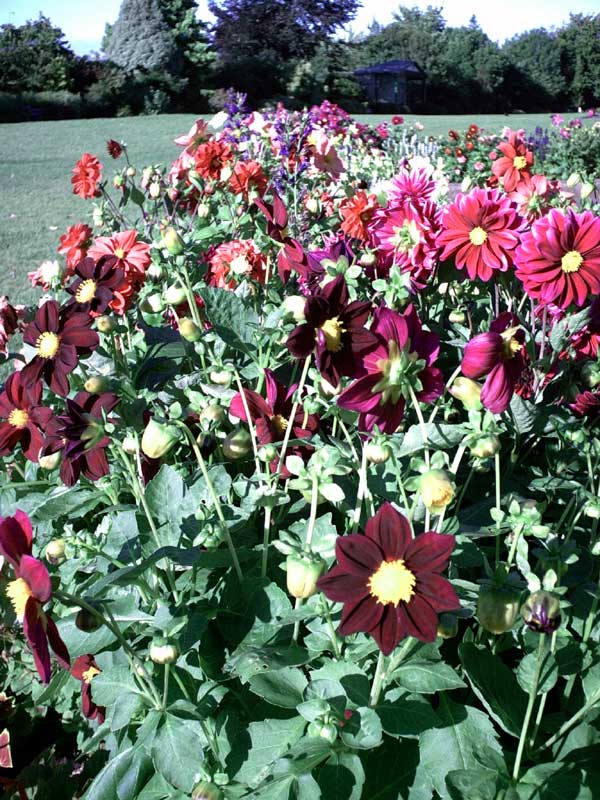 Suffice it to say that there isn’t a single accurate colour, and this was shot on a bright sunny day. 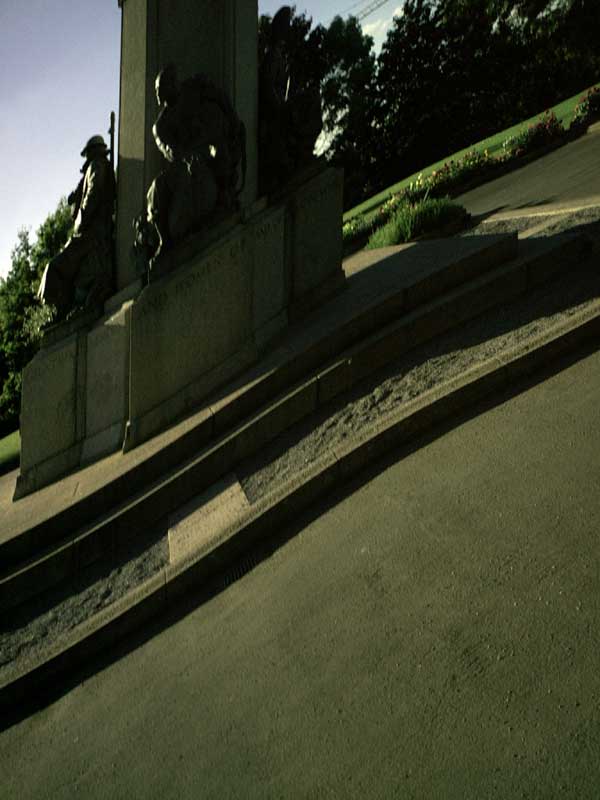 A couple of shots came out like this. I have no idea what could possibly cause such a distortion. Aliens, perhaps? 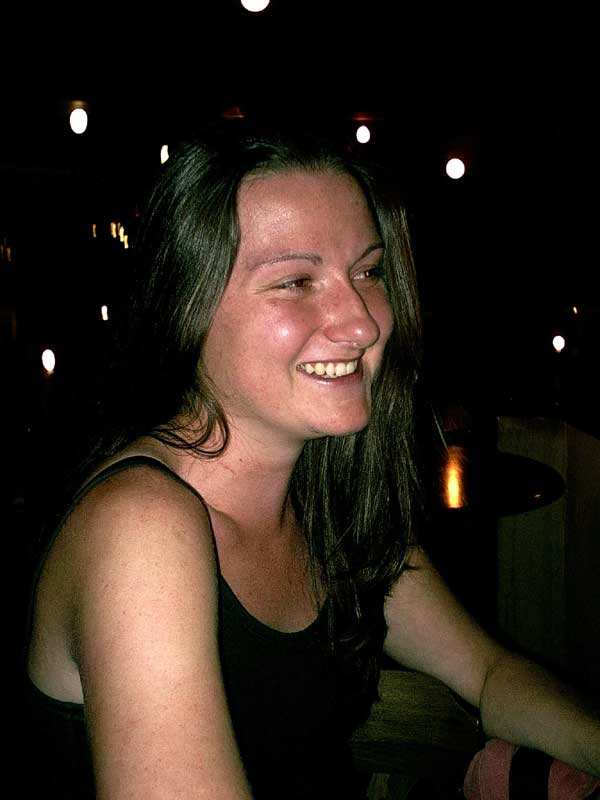 This shot was taken at a range of about 1 metre, which is pretty much the maximum range of the flash. Note the horrendous image noise and distorted colour. 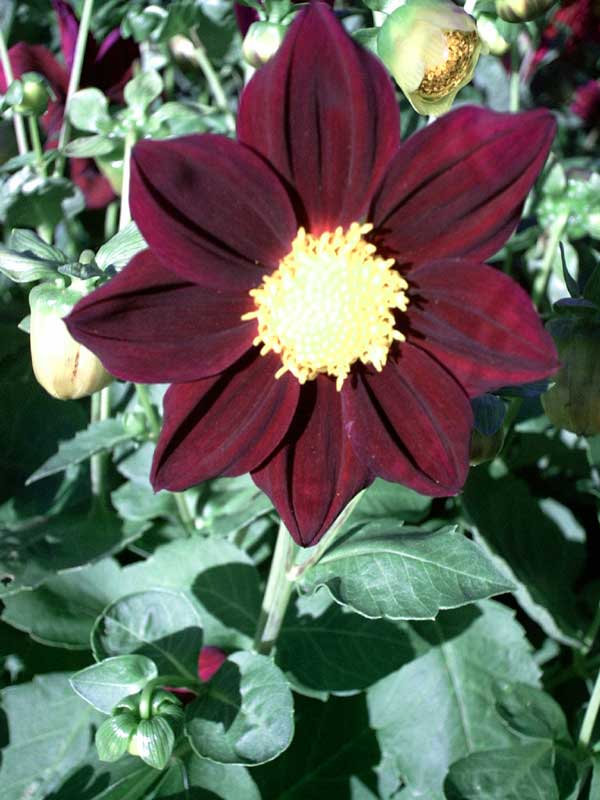 With no autofocus or range indication, taking macro shots is a hit-or-miss affair. Also, the exposure meter has burned out the highlights.