To say that God of War’s creator, David Jaffe, thinks big might be the understatement of the year. His 2005 Greek myth epic seemed purposefully designed to confound your expectations, not just of what you could do and show in an action game, but of what you could do and show with the ageing PS2 hardware. At a time when Microsoft’s Xbox was making the PS2 look old and tired, and with the next-generation of hardware waiting in the wings, God of War proved that the little black console still had the power to amaze. As one man fought his way through hordes of foes and battled monstrous beasts, then scaled vast buildings sat atop a Titan’s back, you could practically hear jaws dropping around the world. God of War was, without doubt, one of the most phenomenal video games of the last five years. 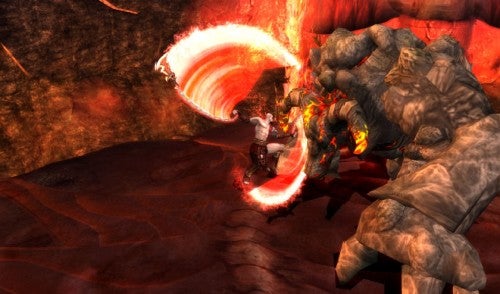 God of War 2 makes it look like Jaffe was only half-trying. If the first game was Jaffe’s Fellowship of the Ring – a signal that a previously middleweight talent has suddenly shifted into creative overdrive – this is his Return of the King: a fully-realised feast of imagination combined with sheer technical muscle. It makes a lot of so-called next-generation games seem small.


Where do you start with a game like this? How about where God of War 2 opens, with our musclebound anti-hero, Kratos, now elevated to godhood, leading an army of Spartans in a raid on the city of Rhodes. Athena, quite reasonably concerned at her protégé’s bloodthirsty leanings, gets our boy demoted to demigod status right in the middle of the fray, leaving Kratos not just to fight his way through masses of justifiably annoyed Rhodes guardians, but at the mercy of the towering colossus; an enormous metal giant whose hands tear through buildings and whose face can fill the whole screen. After defeating this enormous foe – a running battle that takes place not just around the walls and battlements of Rhodes but inside the colossus itself, Kratos then has to battle the mighty Zeus himself. For most games this would be the spectacular climax. God of War 2, however, is merely getting warmed up. 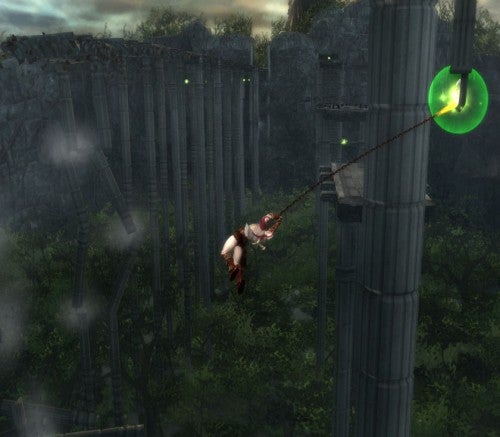 From there it’s on to the depths of Hades, a titan’s icy tomb, and then the Island of Creation, split into three huge chunks floating high above the sea, each chained to a gigantic stone horse. There are stygian temples to be explored, mighty bosses to be fought, enormous weapons to be wielded and some fairly sneaky puzzles that need to be solved. None of this would be out of the ordinary but for two things: the artistic imagination of the development team and the game’s extraordinary sense of scale. Where Devil May Cry 3 might have you battling foes twice your size, God of War 2 comfortably doubles that, then gives the hulking giant a terrifying sense of strength and mass. 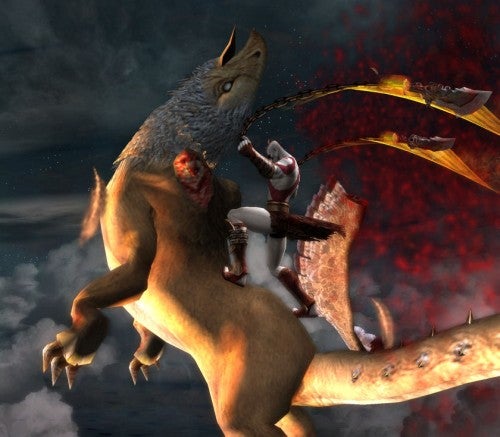 What’s more, these critters are really, really nasty. Think a giant Cyclops is scary? Well, how about one with a fiendish beast-lord sitting on its back, using two giant axes to goad the beast into an even greater fury? Did the gorgons in the original take you back to that first time you watched Clash of the Titans in the cinema, squinting through your closed fingers so the snake-haired, snake-tailed witches couldn’t get you? OK. Maybe that was just me, but the sequel has a gorgon to make Medusa and her sisters look like the sort of harmless old lady who might invite you in for a nice cup of tea. 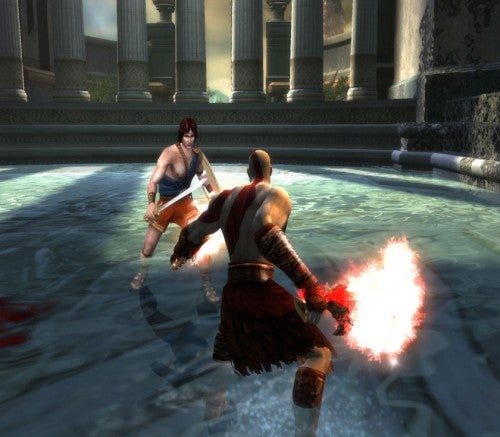 The same thinking goes for the scenery. Why have Kratos scale the side of your regular monumental temple when he could be climbing up something the size of Chartres cathedral that’s been stuck on the top of an enormous flying island? There’s one moment where Kratos walks across a massive chain suspended thousands of feet above the ground that gave me an almost horrifying sense of vertigo. At times – in fact much of the time – the landscapes, the architecture and the creature designs match WETA’s work on Lord of the Rings. Combined with a superb sweeping camera that zooms in to catch the chaos of battle then pulls back to reveal awesome vistas, not to mention a graphics engine that, with its reflective surfaces, superb lighting and lush textural detail is probably the high-point of PS2 programming, and the overall effect is frequently breathtaking. Resolution aside, many 360 and PS3 games don’t look this good. 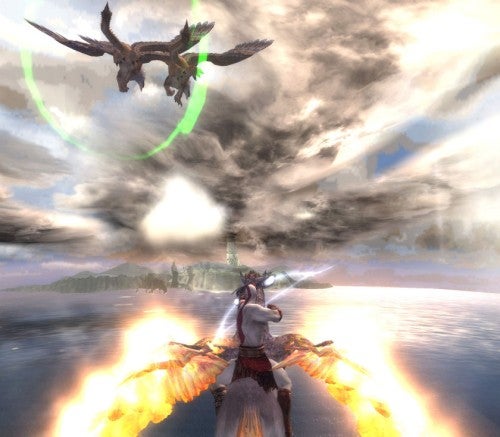 But God of War was never just about the eye candy. In the original, Jaffe and the team at Santa Monica studios created the finest third-person melee combat system known to man: a smart combination of spectacular flailing weaponry, killer combos and satisfying finishing moves where – by pressing the right buttons in response to an onscreen prompt – our hero could polish off fallen foes in the grisliest possible fashion. God of War 2 runs with this, adding some enjoyable new arms such as a punishing barbarian hammer and a fearsome magic spear, then sending enough eldritch horrors and furious beasts to keep you busy with them for a while. The resulting gameplay is fast-paced, hugely violent but most of all an awful lot of fun. What’s more, as in the first game, enemies dispatched unleash mystical red orbs. These can be spent on cool weapon upgrades and even more destructive combos, so if you think Kratos is a whirlwind of fury at the start of the game, just wait until you reach the halfway point.


And lest you find yourself too exhausted to go on, the game throws in deceptively simple block, floor switch and lever puzzles that are often more tricky than they first appear. There are even new time-slowing powers that prove crucial in the games puzzling and platform-hopping endeavours. This might be the most macho game in town, but that doesn’t mean its all brawn and no brain.

The biggest criticism of the original still survives – this is a game with little room or incentive to explore, and while you’re not constrained as such, there really is only one main pathway through. But if this is the game equivalent of a thrill ride, then it’s one of those whopping great megacoasters you only find in US theme parks, the lift-hill towering hundreds of feet over the landscape and each drop dishing out seconds of glorious airtime. Like most rollercoasters there is a feeling that it loses some momentum towards the end – possibly because it’s a longer God of War this time around – but if the pace lets-up slightly, it gives you time to appreciate what an excellent, brilliantly balanced game this is. 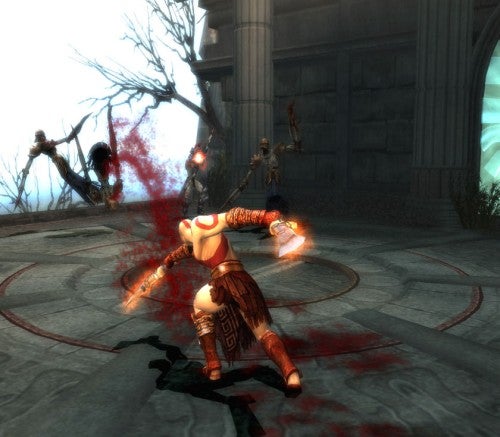 So good, in fact, that even the Pegasus-riding flying sections are enjoyable. At first, you’re thinking “Why? Why? Why am I suddenly playing a crap version of Afterburner with a flying horse instead of a jet?” But once Kratos starts leaping onto hostile flying mounts in order to administer his coup de grace, your response soon changes. Maintain the level of mayhem, and flying is actually pretty cool. It also helps that these interludes are relatively short and sweet, meaning that they don’t outstay their welcome. In fact, my one real gripe about God of War 2 is that the storyline doesn’t quite have the melancholy undercurrent that made Kratos so intriguing in the original. Here he’s more a straight thug and you’re expected to revel in his brutal quest for vengeance. No problems there and – let’s face it – anyone who can swing around two swords on eight-foot chains without losing an appendage is pretty cool, but you can’t help wishing for a little of the first game’s psychological (well, psychotic) depth. 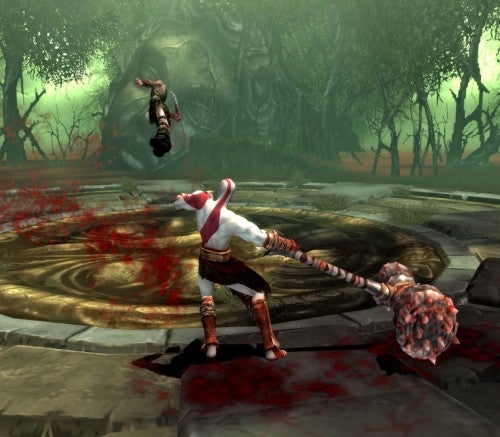 Frankly, it would have been impressive if God of War 2 has merely equalled God of War. The fact that it surpasses it on every single level is practically a miracle. It starts big, gets bigger, then just keeps on getting bigger and bigger and bigger, not to mention better. Just when you think you’ve seen it all, Jaffe and co throw out something else to amaze you, and it’s this – the need to see what they have got for you next – that keeps you moving from gore-drenched brawl to puzzle to blood-soaked scrap without wanting to pause for a minute. Other games give you more to do, more to explore, maybe more to think about and feel, but few knock you off your feet as frequently and powerfully as this. It’s not particularly innovative and it’s not particularly deep, but God of War 2 is a glorious, savage masterpiece all the same. So get your PS2 down from the attic, nick it back from the kids or buy a new one if you have to. This might be the last game on the system that you really don’t want to miss.


A stunning game begets an unmissable sequel. If this is the PS2’s swan song, then it sounds more like a defiant, bloodthirsty war-cry. 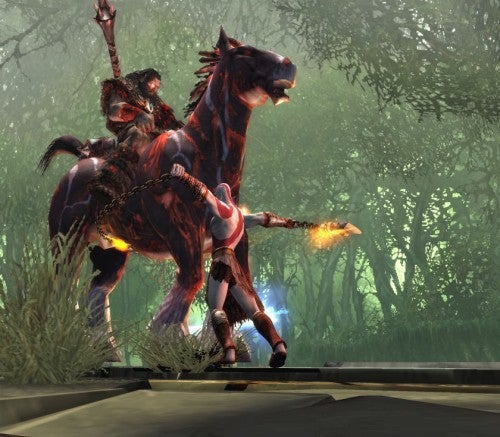