We liked the Asus M3A32-MVP Deluxe WiFi AP Edition (despite its absurdly lengthy name) but were less excited about AMD’s Phenom processor which didn’t seem to bring anything special to the party.


Well it’s a whole new year and the motherboard manufacturers have had a few weeks to sort out BIOS revisions for their Phenom models so let’s see what we make of the Gigabyte GA-MA790FX-DQ6. The model code gives away the game that this board is built around the AMD 790FX chipset which is the same silicon that we saw on the Asus.


It doesn’t come as a great surprise that reviewers are offered motherboards with the top-of-the-line chipset but there’s no getting away from the fact that the key feature of 790FX doesn’t work at present. I’m talking, of course, about CrossFire X where you gang up three or four graphics cards for your gaming delight. At present CrossFire ‘only’ works with two graphics cards and we’re still waiting for drivers that support more graphics cards. There are rumours of Beta drivers arriving any day now with final versions possibly turning up in March but whether that turns out to be the case is anyone’s guess. 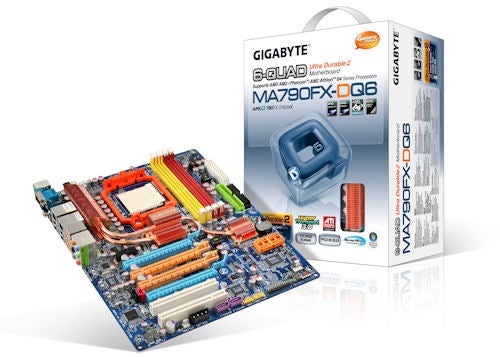 You may be thinking that I’m an old fuss budget who has got the wrong end of the stick. What harm can lie in buying a motherboard that does everything you want today with the prospect of more features in a couple of months’ time? The problem lies in the layout of the board and those four vital PCI Express x16 graphics slots. For one thing they take up a huge amount of space and for another the graphics cards will block the other expansion slots and generate a significant amount of heat. Asus has that covered by the simple expedient of wide separation of the four graphics slots so you can make the most of the expansion slots right up to the point that you plug in four double slot HD 3870 graphics cards. Even then you can connect your hard drives without any trouble as the SATA and PATA connectors are laid down for easy access. 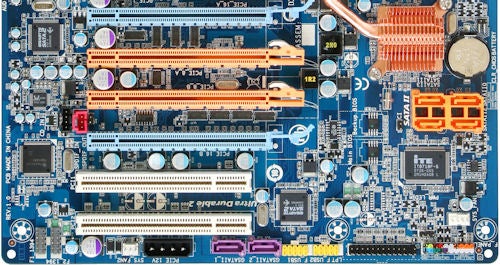 Gigabyte has taken a different and somewhat extraordinary approach by positioning the four graphics slots next to each other so you cannot use double slot cards but will instead be restricted to HD 3850s. You may be thinking that you can use CrossFire X to gang up a pair of the new HD 3870 X2 cards but Gigabyte has another nasty shock in store as the four SATA connectors are bang in line with the third graphics card slot and they stand upright so there’s a good chance the cables will interfere with the graphics card.

The layout and design of this board centres around the graphics support that is offered by the 790FX chipset but the problem is that Gigabyte has handled the layout poorly. Perhaps that’s not entirely fair as you can be sure that there will be at least one and maybe two PCI slots free for anyone who fancies a proper sound card. But there can surely be no earthly reason for the SATA cables to collide with the graphics cards.


At the top of the board there’s another odd design choice as the four memory slots are very close to the processor socket. If you use the standard AMD Phenom heatsink fan unit then you’ll have no problem and the same is true if you have a compact watercooling block. The problem comes when you install a moderately beefy air cooler, in our case an Asus cooler with a 90mm fan. This cooler has seen service on any number of AMD motherboards without any problems but on this Gigabyte it blocked the first memory slot. 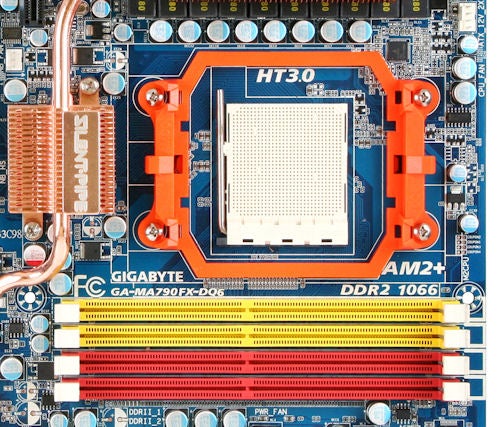 The I/O panel is packed with a large collection of ports and connectors with two PS/2 ports for those of us who enjoy a traditional mouse and keyboard, six USB 2.0 ports, one Firewire port, six analogue audio mini jacks plus coaxial and optical outputs, two eSATA ports and dual Gigabit LAN. There’s no harm in a second LAN port, although it’s hard to see who needs this feature, but why on earth has Gigabyte included a Serial port above the digital audio connections? No doubt there are people out there who find a use for Serial or Parallel ports but surely these are sorts of connectors that could be located on a bracket as an optional extra. This would leave more space on the I/O panel that could be used, for instance, to space out or add more USB ports.


You’ll note that so far we haven’t turned the GA-MA790FX-DQ6 on and we’re failing to be impressed which is rarely a good start to proceedings so let’s add some electricity and see what happens. With a Phenom 9500 installed alongside 2GB of Corsair PC-9136 DDR2 memory and an Asus 8800 GT graphics card we were ready to install Windows Vista Ultimate Edition. In an ideal world we’d have plugged in a pair of HD 3850 or 3870 cards however your reviewer currently has an embarrassment of wealth in the Nvidia department and is rather poor when it comes to AMD hardware.


The first step was to perform a BIOS update as the Gigabyte was supplied with version F1 and it was the work of a moment to plop the new version F3 on a floppy and to update within the BIOS using the Q-Flash function.

Starting the Gigabyte is a slightly nervy process as the POST screen takes a fair few seconds to pop up on the screen. The BIOS is your regular AWARD set-up that has all of the options that you’d expect including the MB Intelligent Tweaker which gives you full rein for overclocking. There’s a further option in the F3 version which is less expected as you have the option to ‘Patch AMD TLB Erratum’.


This refers to the problem that beset early versions of Phenom chips that meant they miscalculated certain, well, calculations. A fix has subsequently been released but it is generally accepted that it knobbles the chip’s performance by around 10 percent. In theory the TLB Erratum-not-an-error won’t strike you down unless you are very unlucky but we ran the Phenom 9500 with the TLB fix on both settings for comparison and it took a slice off the memory and graphics performance but oddly it seemed to boost processor performance.


Once we’d finished in the BIOS and the POST was done we were faced with a choice of setting SATA in either AHCI or IDE function which is a one-off choice that remains set until the BIOS is cleared. 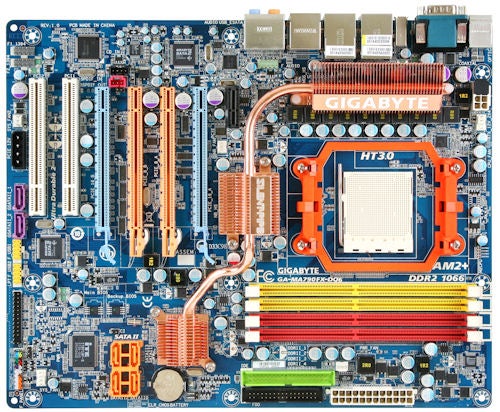 The Gigabyte behaved very respectably with the Phenom 9500 but we were surprised to see that the driver CD doesn’t include a copy of the AMD OverDrive utility. Instead Gigabyte has selected its Gigabyte EasyTune5Pro utility which is far less sophisticated than the AMD software.


We didn’t waste time trying to overclock the Phenom 9500 as it is notoriously fickle but instead plugged in a Phenom 9600 Black Edition which is unlocked and far more amenable. We had no trouble raising the reference clock from 200MHz to 225MHz for a CPU speed of 2.59GHz on standard voltages but found that was the limit. This modest overclock led to a handy increase in performance but it was fairly feeble compared to the Intel Core 2 Q6600 which sells for a similar price.

Gigabyte has made some odd choices with the design of the GA-MA790FX-DQ6 that centre around the four graphics slots. Add in the questionable performance of Phenom in a world that is dominated by Core 2 processors and you have a motherboard that is only likely to appeal to a dedicated band of enthusiast gamers.