AMD’s 7 series of chipsets is a bit of a mixed bag. Head to the AMD website and you may well come to the conclusion that there are three chipsets that support Phenom. In order of price you get 770, 790X and 790FX that respectively offer PCI Express support for a single graphics card, CrossFire and CrossFire X support. Dig a little deeper and you’ll find the 780G chipset on a different webpage, which makes a certain amount of sense.


780G is the only 7 series chipset with integrated graphics and is aimed at the budget PC and Media Centre markets rather than the gaming sector. What you may not know is that there’s a fifth 7 series chipset that doesn’t appear on AMD’s website. This week we’ve got our hands on a Gigabyte GA-MA74GM-S2H that sports the mysterious 740G chipset and happily we also have a Gigabyte GA-MA78GM-S2H with 780G chipset for comparison.


Both boards are Micro-ATX designs that are very similar in appearance with passive coolers on the chipset and a single PCI Express graphics slot. The only visible differences are four DDR2 memory slots on the 780G model and two slots on the 740G plus some minor changes on the I/O panel. The 740G ditches the second PS/2 port so you’ll be obliged to use one of the four USB ports for your mouse and it’s got three audio mini jacks rather than the six you’ll find on the 780G. In addition the 780G has one eSATA port and one Firewire but both models have digital audio output (optical on the 780G, coaxial on the 740G) and most importantly of all they both have VGA, DVI and HDMI graphics outputs. 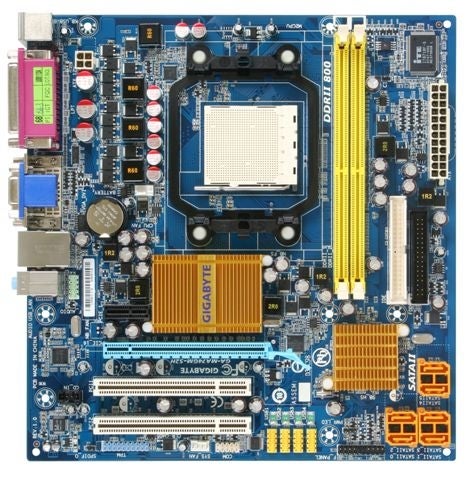 Both motherboards have a clean, simple layout that is exactly the sort of thing you expect from a board with a relatively short list of features made by a major motherboard manufacturer.


We found the GA-MA74GM-S2H on sale for £10 less than the GA-MA78GM-S2H and as the 780G offers two more memory slots as well as the eSATA and Firewire that we mentioned that might all seem very straightforward. Except we haven’t checked out the differences between the 740G and 780G chipsets, and that’s where things get a bit weird.

780G is bang up to date and offers Radeon HD 3200 graphics with support for DirectX 10 and 40 Unified Shaders. Although you can play games on 780G the most important feature is the UVD 2.0 (Unified Video Decoder 2.0) which does a superb job of HD video playback. There are other aspects of 780G that suggest it is a true 7 series chipset as it supports the quad-core Phenom with Hyper Transport 3.0 and if you fancy adding a graphics card the interface is the latest PCI Express 2.0. 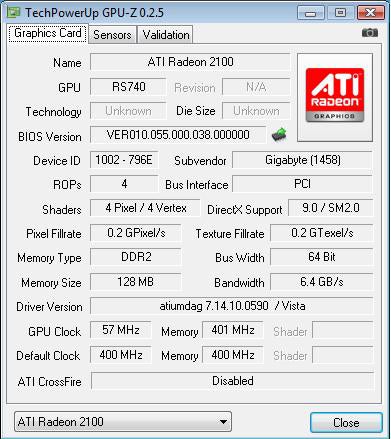 By contrast the Northbridge of the 740G has features from a previous generation of chipsets as it supports PCIe 1.1 and HT 1.0 however the Southbridge is the latest SB700. The graphics core is called Radeon 2100 which is a name that means very little to us. Running GPU-Z shows that the graphics core supports Shader Model 2.0 with four Vertex Shaders and four Pixel Shaders so the 740G would appear to be a combination of 690G Northbridge and 7 series Southbridge. Essentially, the graphics core should have no trouble handling the Aero interface in Windows Vista but what else can it do?

We tested the motherboards with a low power dual core AMD Athlon X2 4850e processor that runs at 2.5GHz and found that the 740G lost out to the 780G in every department. Graphics performance was the most obvious problem as the 780G is just about capable of playing games such as Half Life 2 while the 740G isn’t up to the task. 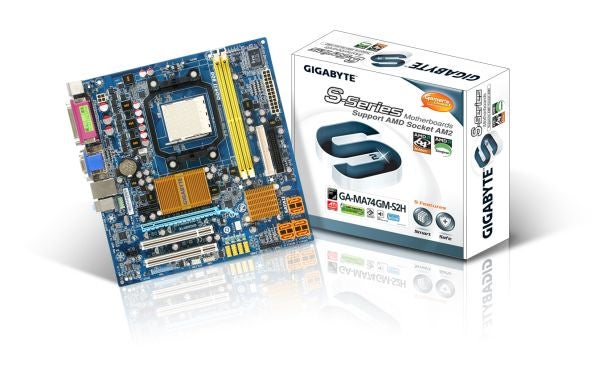 The 740G doesn’t support Shader Model 3 graphics but that’s more a symptom of the problem than the problem itself as it would only encourage you to set your sights too high. More to the point is the 740G draws an additional 10 Watts of power compared to the 780G at idle which rises to 30W when the system is under load playing a Blu-ray movie. The 780G was perfectly happy operating with the small passive heatsinks on the Gigabyte but with the 740G motherboard we felt it necessary to use a case fan to cool the Northbridge as it hit 50 degrees and was continuing to rise. With the fan the temperature was stable at 40 degrees. 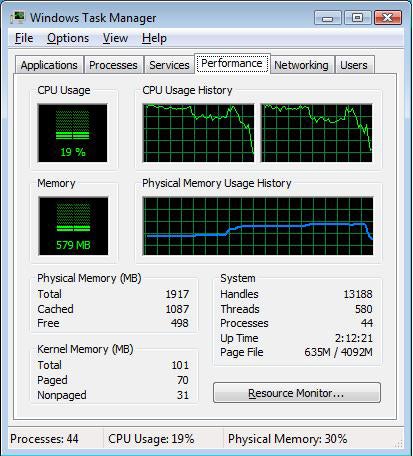 The real shock comes when you look at CPU load during Blu-ray playback as the 740G runs over 75 percent at all times and peaks at 100 percent load. You can see that an anti-virus update or incoming e-mail would interrupt things in those circumstances. By contrast the UVD 2.0 in the 780G chipset keeps the CPU load below 30 percent so you get the dual benefits of a CPU that is unstressed along with lower power consumption.


Plugging in a PCI Express HD 3450 graphics card sorted out Blu-ray playback on the 740G but made little difference to the 780G although it gave us the option of enabling Hybrid Graphics. This combines the 780G graphics core with the HD 3450 in CrossFire. The 780G wins this comparison in every department and makes you wonder who would buy a 740G. Yes it’s slightly cheaper than 780G but it removes the option of building a Media Centre PC and takes away Blu-ray playback. It also increases the power draw of your PC, albeit by a small amount.


The AMD 740G chipset is something of a puzzle as it lacks the UVD 2.0 and cannot handle movie playback as well as the 780G yet for some reason the SB700 Southbridge delivers six ports of SATA RAID. That’s a bizarre combination of features for a motherboard that is meant to be a natural choice for a Media Centre PC.